Awareness, screening, practices and attitudes of cervical cancer among doctors and nursing staff working at a tertiary care centre

Objectives: To assess knowledge, attitude and practice of medical and paramedical staff about cervical cancer as well as its screening and prevention.

Conclusion: Cervical cancer prevalence is rising due to inadequate knowledge and awareness among healthcare personals. Improvement can be brought by regular use of Pap smear.

Higher prevalence of new cases (83%) is found in developing countries, making it the leading cause of mortality among women.3,4 It is the second leading cancer causing death worldwide, and stands the third prominent cause of death in Asia.5 Many women have precancerous conditions that need to be picked up at the right time and managed accordingly. If screening is regularly done in gynaecological clinics, the incidence will certainly decrease. The addition of vaccination will reduce the prevalence further, but implementing a screening programme in any society is a difficult task.6,7

Focussing on early detection of the condition is the key to controlling the prevalence.8

Pap smear has shown promising result as it is quite inexpensive and effective in identifying the disease.

The current study was planned to assess knowledge, attitude and practice (KAP) of medical and paramedical staff about cervical cancer as well as its screening and prevention.

Approved by the IRB department It was an Institutional designed prospective cross-sectional survey. It was conducted at a tertiary care hospital (Jinnah Postgraduate Medical Centre Karachi) for period of 03 months from 1st March 2019 to 30 August.

A total of 347 participants were included in the study by using non probability consecutive sampling technique, (203 doctors 144 paramedical staff). The study included Nurses, Paramedical staff and doctors, working at JPMC.

There was a random selection of nurses & doctors Excluded were Doctors, Nurses and Paramedical staff working outside JPMC.

A questionnaire was designed by reviewing the literature. It consisted of the socio demographic details, knowledge, attitude and awareness of Pap smear among the health care professionals. Voluntary consent was taken and it was assured, there was no compulsion in filling the questionnaire. The respondents were asked to fill in the questionnaire by ticking the boxes.

Data was collected by six assigned house officers, who were responsible to fill the form correctly. If there was any query regarding the questionnaire it was addressed by the house officer there and then.

Practices of the candidates were judged by questions as, if they have ever referred a patient for screening and have they got themselves screened for the disease.

Data was entered and analyzed using SPSS version 20. The sample size was determined by using online Open Epi calculator.9 The calculation was based on the awareness proportion of disease symptoms (33.33%) in women with 95% confidence interval and 5% margin of error. The calculated sample size was 342. Although, five more participants included, so the final sample size of our sample was 347.

A descriptive analysis was done for demographic and results were presented as Mean ± Standard deviation for quantitative variables while, frequencies and percentages were presented for categorical variables. Chi-square or Fisher exact test was initially applied for assessment of knowledge, symptoms, prevention, screening and attitude among medical and paramedical staff. Association between medical and paramedical staff was assessed by Chi-square or Fisher exact test, where appropriate. Univarate logistic regression was applied to evaluate the risk factors of cervical cancer. A P value of <0.05 was considered statistically significant. 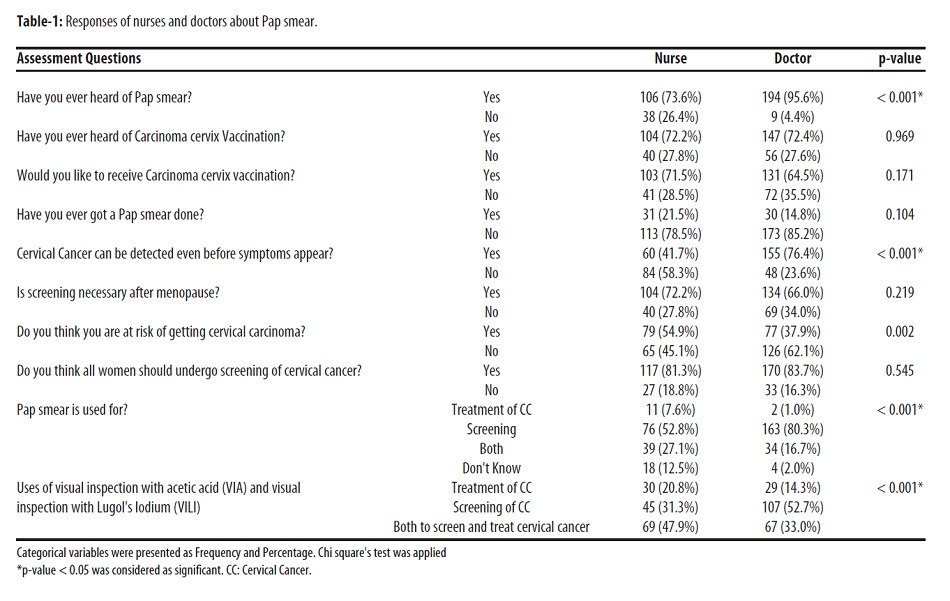 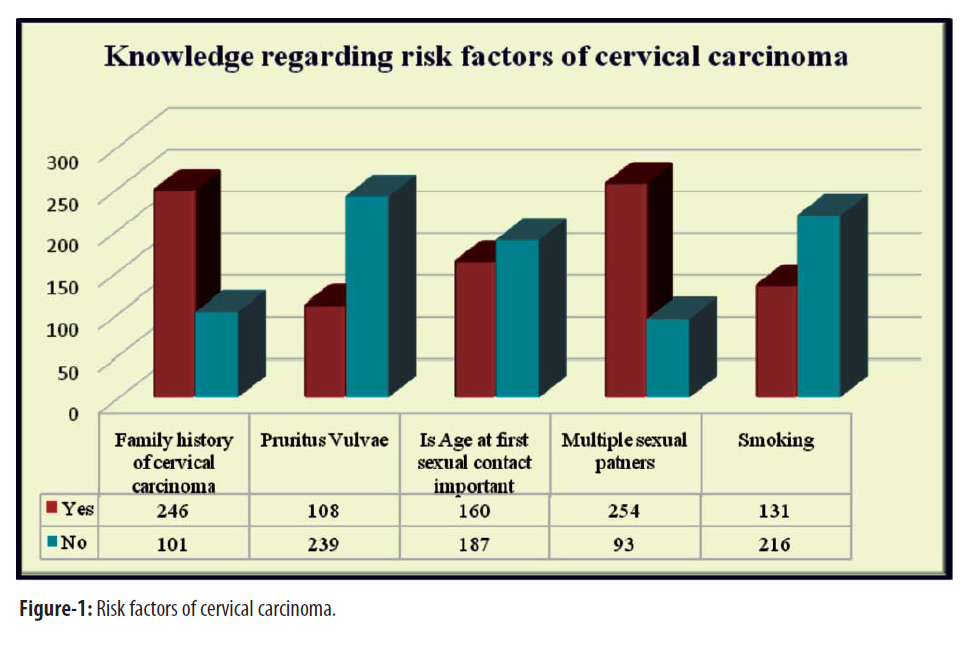 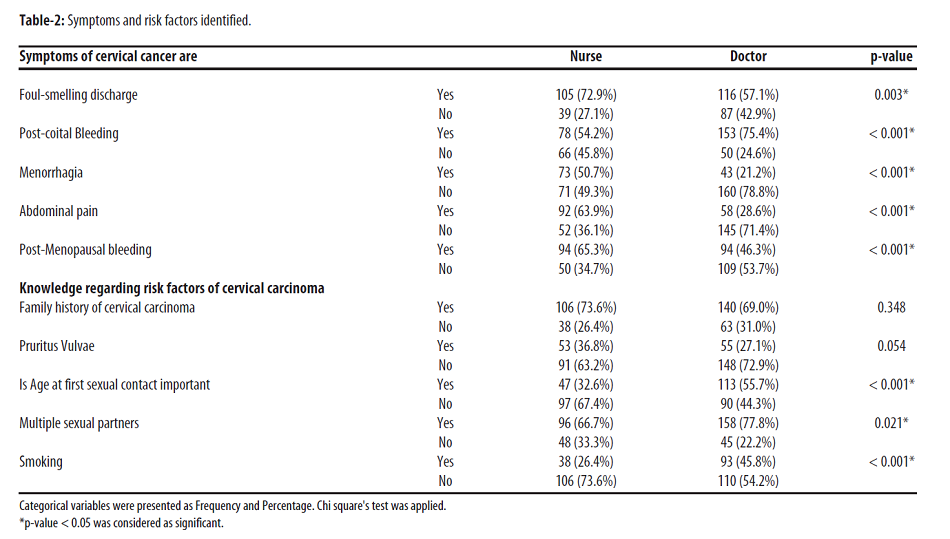 Logistic regression analysis showed that the chances of those with post-coital bleeding were 5.54 times significantly higher to develop cervical cancer (Table-3). 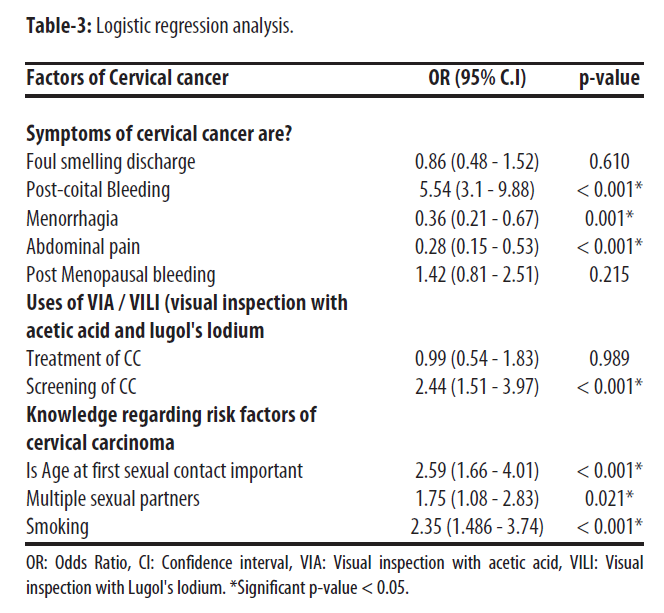 Of the total, 61(17.6%) subjects had got a Pap smear done, and 156(45%) thought they were at risk of developing carcinoma cervix. The reasons for not having the smear done were also noted (Figure-2). 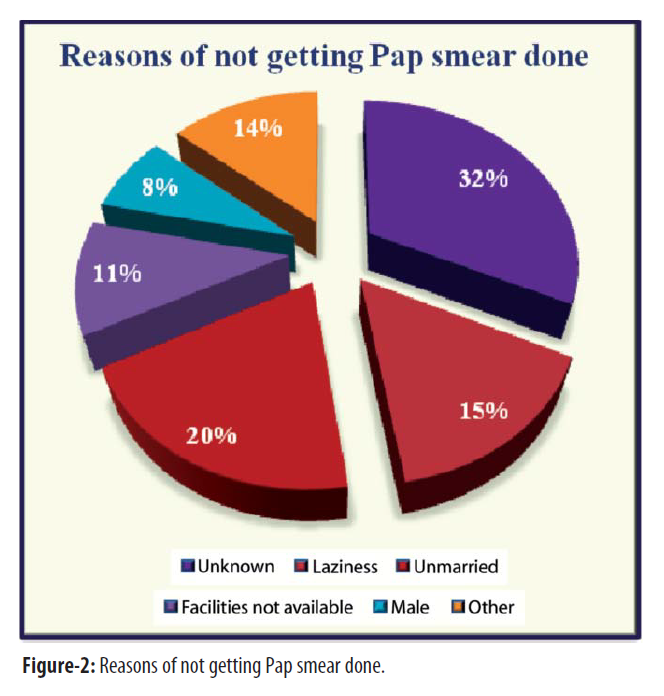 This cross sectional study was conducted among nursing staff and the doctors of Jinnah Post Graduate Medical Center in order to know there basic knowledge, attitude and perception towards pap smear and cervical cancers. Adequate knowledge of the doctors and more importantly of the paramedical staff of cervical cancer is the only possible way to stop the disease. Mass awareness programmes in the general population are needed emphasizing the importance of Pap smear screening. America has reduced the mortality by cervical cancer to 70% between 1975-2016. This is by using Pap smear as a screening test.10

Pap smear is a very cheap test widely available across Pakistan. Approximately 80% reduction can be achieved by implementing this simple test as a routine gynaecological checkup in every sexually active women. Guidelines regarding Pap smear must be clear to all the health care professionals.

The main focus of our study was to bring awareness at Jinnah postgraduate Medical Center which is a tertiary care hospital catering people of Sind and Baluchistan. The main bulk of patients belong to poor socioeconomic areas. As education plays pivotal role for the spread of the disease cervical cancer is more prevalent in this group of people.

It was observed from this study that 239 (68.9%) were well aware of Pap smear being the screening test. These findings are in contrast to the study conducted at Chennai,11 in 2013, in which all the workers were well aware of pap smear. Our findings are similar to another study,12 in which 77% respondents knew Pap smear is used for detection of cervical cancer but less than half knew that it is used as screening test. In another study13 79% were aware of cervical carcinoma screening. This was a worrisome issue which needs special attention. Only 24.5% were aware of the true guidelines to repeat the test. 68.6% knew that screening is necessary even after menopause, while 31.4% were unaware of the fact.

A total of 152(43.8%) had an idea of the exact use of VIA but majority were still unaware these findings are in contrast to a to a study in which 95.3% of participants were aware of VIA/VILLI. Islamabad reported14 that visual inspection of cervix with acetic acid (VIA) has comparably more sensitivity 78.5% than Pap smear 61.1%.

In our study knowledge of health care professionals was suboptimal, and it needed understanding of the disease process. To do this we need to develop regular educational strategies, as basic level of knowledge is expected from health care professionals. Junior doctors and staffs are the first to encounter the patients so continued medical education is imperative to help them.

In all, 55% (117 nurses and 170 doctors) have recommended screening of cervical cancer to others while 48 % (78 doctors and 78 nurses) did not recommend the test. These figures were better than the study conducted by Abu Khalid at Saudi Arabia which showed only 35% participants referring patients for screening.16

In the study conducted in India18 similar results were obtained. The main symptom of cervical carcinoma was pervaginal discharge (65.78%). postmenopausal bleeding (54.73%) & Post coital bleeding (44.73%) being second and third most common symptoms. This is in variant to another study conducted19 among women staff of secondary care referral Hospital, in which 27% believed PV discharge, post coital bleeding 20%, being the two main symptoms. Another study20 reported vaginal discharge (20%), lower abdominal pain 42% and menstrual abnormalities (39%) to be the main symptoms.

In our study, 62% of respondents believed  believed that carcinoma of cervix can develop even before symptoms develop necessitating the need for regular Pap smear screening. These findings are in contrast to the study of Ananthaaranem et al11 in which (81.3%) large majority considered that cervical carcinoma can develop before symptoms.

Our findings are in line with the study conducted by medical and nursing students22 in 2017 in which 38.25% of the participants had complete knowledge about HPV vaccine.

For successfully controlling the condition we need to implement the vaccination in immunization programme and government should bear the expenses in order to see the decline of this malignancy in our country.

Our study shows a very low uptake of Pap smear among doctors and paramedical staff. The referral screening among general population will be even lower. This shortfall of knowledge needs to be addressed by carrying out mass awareness programmes in hospitals and to the general population by doctors and using media to spread information. The lack of knowledge and negative attitude of the staff members was a worrisome issue. JPMC being a tertiary care center should not show this attitude. Pap smear is done freely in our outpatient departments, still the results of knowledge, attitude, and practices are not satisfactory.