To determine the effect of recreational status, body weight and risk factors on physical fitness of general students and on agility of physical therapy students.

Physical activity (PA) is defined as any movement of the body that requires energy expenditure. It includes any motion one does through the day regardless of its intensity which is broadly categorised according to energy expenditure. PA can be viewed as a continuum from sedentary behaviour to vigorous activity.1-5 It is recommended that PA and its intensity should be in accordance with age. < sup>6,7 Physical fitness is considered a measure of individual's ability to carry out PA effectively and efficiently without undue fatigue.3-5 Physical fitness is essential for enjoying the state of health and well-being.3,4 Physical fitness is generally achieved through engaging in moderate-to-vigorous exercise, following proper nutrition, and taking sufficient rest.5  Risk factors, like lack of exercise, smoking and being overweight, can

The cross-sectional study was conducted at Taibah University, Medina, Kingdom of Saudi Arabia (KSA), from November 2018 to April 2019, and comprised general and PT students from the College of Medical Rehabilitation Sciences (CMRS). After approval from the institutional ethics review committee, the sample size was determined using G power calculator based on power 0.8,10 alpha (a) error probability 0.05, effect size 0.8 for priori power analysis. One-tailed t test for mean difference between two independent means was adopted.

The sample was raised consecutively using convenience sampling technique. Those included were healthy students engaging sometimes in regular PA who were willing to participate. Those who were obese, had any spinal or lower-limb surgery, had any recent spinal or lower-limb injury, had significant limitation of mobility or suffering from any neuromuscular disorder were excluded.

Participants were classified as recreationally active if they indicated engagement in vigorous intensity exercise of 45 minutes for three times/week or engagement in moderate intensity exercises of 30 minutes for five times/week. .2,5 Risk factors were identified by the presence of overweight, smoking and being recreationally inactive. .6,7 No risk factors meant recreationally active, non-smoker, healthy-weight participant. One risk factor meant the presence of any one of the previously mentioned risk factors. Overweight was defined as body mass index (BMI) >25 kg/m2. Smokers were identified if they smoked any kind of tobacco at any frequency.

After taking informed consent from the participants, a pro forma was used to systematically collect demographic data including name, age, height and weight after which the BMI was calculated. Recreational status and risk factors were also identified. Every participant was screened for mobility and flexibility of spinal, lower and upper limbs to make sure they met the inclusion criteria. .11-16 Spinal mobility was assessed at sagittal and frontal planes. .11-13 Upper-limb mobility was assessed using right and left Apley's test. .14 Lower-limb mobility was assessed using squat to stand. .13  Participants who could not run 1000 metres were classified at the cut-off point of <500 metres and >500 meters. The participants were exposed to a demonstration of the three elements of BFT; flexed-arm hang, 11x10 shuttle sprint, and 1000-metre run. .6,7 Sammito et al. .17 mentioned that the three BFT elements were appropriate outcome measurement instruments and feasible, requiring few equipment.

Flexed-arm hang is universally used as a field test of muscular fitness. Flexed-arm hang in the chin-up position was used to assess arm and shoulder girdle strength. Every participant was given verbal encouragement to hold on with the chin above a horizontal bar as long as tolerated. .6,7 The 11x10 meter shuttle sprint is used to test agility. Every participant has to run five-and-a-half laps in the fastest time possible. The subjects started from standing position and sprinted as fast as possible and negotiated a cone positioned 10 meters away. .6,7 The1000-metre, also called one-km, run test is one of the fitness tests used in international physical fitness test battery. Researchers started the timing from the start signal and ends when the participants cross the 1000-metre marker. Every participant had to run as quickly as they could over that distance, and the scores were calculated in seconds. .6.7

Data was analysed using SPSS 23. Descriptive data was reported as mean ± standard deviation (SD) and other characteristics were reported as frequencies and percentages. Shapiro-Wilk test was used to verify data normality. Levene's test was used to verify equality of error variances. Independent t test was the parametric inferential statistics that was run across categories for independent groups or any two levels of independent variable. Spearman's rho was run to determine the agreement between all related variables when nonparametric inferential statistics was needed. A one-way multivariate analysis of variance (MANOVA) was calculated to examine the effect of recreational status (active versus inactive), risk factors (one versus no risk factors), and BMI (healthy weight versus overweight) on 11x10 metre shuttle sprint test and flexed-arm hang position. Wilks' lambda test was used to express multivariate findings. Follow-up univariate ANOVA was run if Wilks' lambda test came out significant.

Multivariate analysis of covariance (MANCOVA) was conducted using BMI as covariance. MANCOVA was calculated to examine the effect of risk factors and BMI on 11x10 metre shuttle sprint test and flexed-arm hang position.

Independent samples t test was also run for testing equality of means for recreational status, risk factors and BMI. Participants who were classified as underweight or with two risk factors were excluded from subgroup analysis due to their very few numbers. Statistical significance was set at alpha level of < 0.05 and 95% confidence interval of the difference. 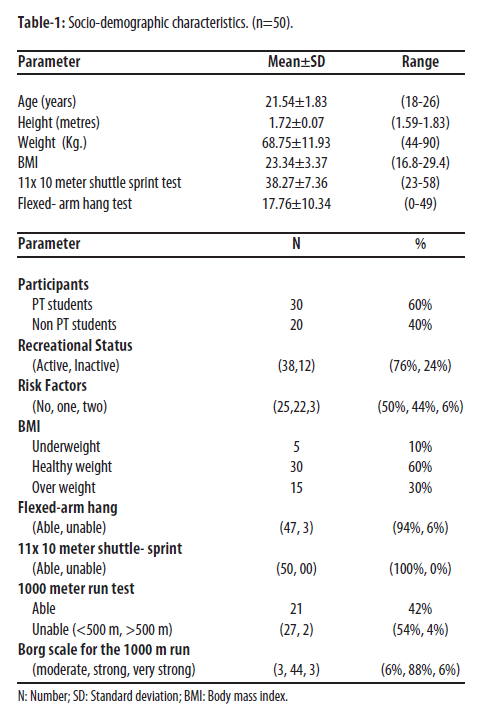 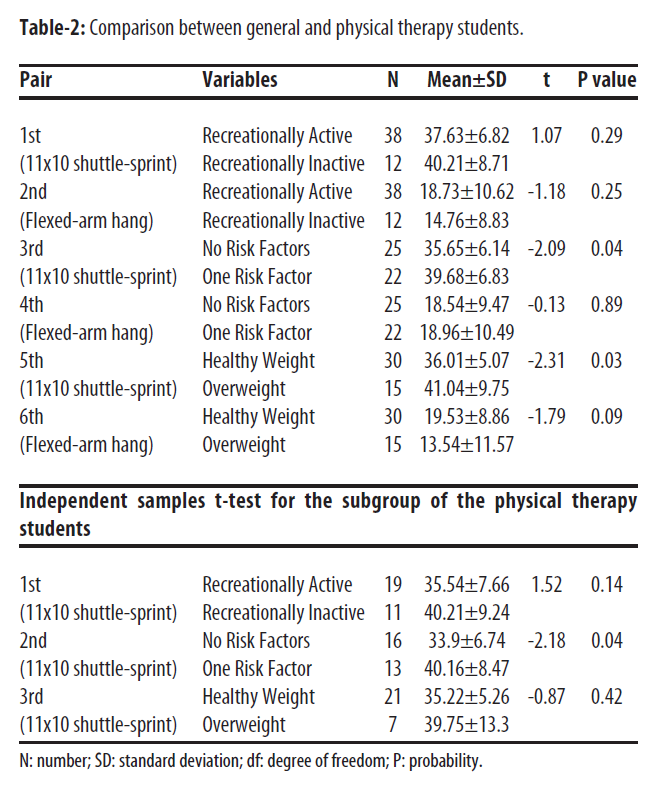 Subgroup analysis conducted on PT students was only significant for comparing the risk factors (Figure). 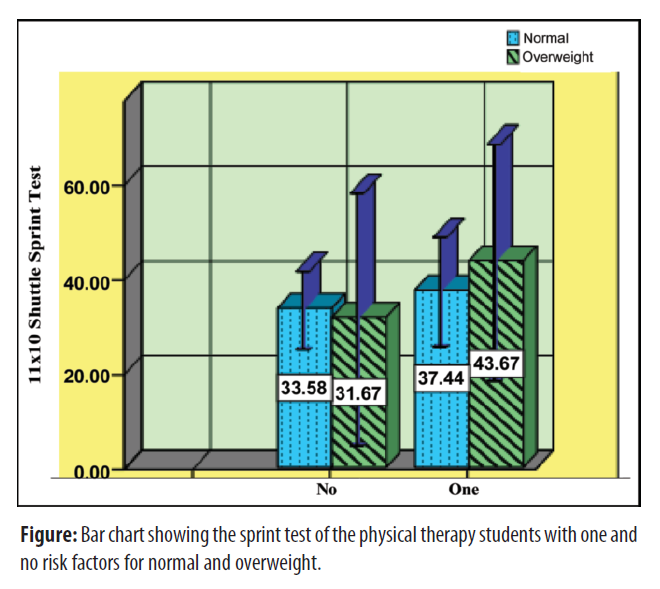 The study found a significant effect of having a healthy weight and no risk factor for better agility and upper-body strength among adult students. The subgroup analysis for PT students showed better agility for those with no risk factors, but not for the weight status or recreational status. Pierce et al. .22  mentioned that BMI is not associated with physical performance, but can predict certain physical fitness elements. The majority (58%) of students could not finish the 1000-m run, with 54% out of the 58% ran <500 metres. About 88% of the total participants indicated that the test was perceived as strong exertion which reflected poor endurance abilities.

Regarding agility, the findings of the current study are in agreement with those reported earlier. .6,7

Leyk et al. .6  conducted the study on a group of young soldiers who were comparable to the current sample as being males with similar age range. The soldiers accomplished the agility test in 43.7±4.2 seconds whereas the students who participated managed to accomplish the agility test in 38.2±7.3 seconds. The students took less time to accomplish the agility test compared to the soldiers, but it has to be acknowledged that the participants in the current study ran five-and-a-half laps in the fastest time possible, but they did not have to lie down on the stomach and quickly get up and sprint between the laps. El-gohary et al. .8  reported the accomplishment of agility test in 31.9±4.2 but the sample comprised adolescents aged 14.9±1.3 years. It is known that age plays a vital role since physical performance tends to deteriorate with increasing age.6 Leyk et al. .7  pointed out the substantial concern regarding the exercise patterns since lack of exercises in young adults have harmful effects, that are expected to increase with the rising of age.

The results of the flexed-arm hang in the current study were non-significant for all the variables and that was in line with the findings of Clemons et al. .23  It is known that flexed-arm hang performance is mainly isometric and is more correlated with the relative isometric strength. .24

The recreational status did not show any significant results on the strength or agility of the participants in the current study. It did not also affect the agility element of the PT subgroup. Despite having 76% of the participants labelled as recreationally active. it seems the intensity level was inadequate for addressing their physical fitness needs. Therefore, vigorous PA, such as fast running, fast cycling and sprinting, should be incorporated with moderate PA to have better physical fitness.2,5

Provided that 58% of the current participants could not finish the 1000-metre run, the therapists needed to carefully address their expected level of physical capacity. Light PA, like regular walking, seems to be inadequate.5Therefore, PT students should be encouraged to engage in moderate-to-vigorous PA for adequate time on a regular basis in order to have the functional-physical capacity that exceeded the work demand.2,5

The findings of the current study converge with earlier findings7 regarding endurance and strength. Early intervention should be introduced in schools to stop further worsening of physical fitness levels. Baceviciene et al.25 reported that lower PA, being recreationally inactive, and having poor physical performance were associated with greater psychosocial complaints. Adolescents who perceived themselves as physically active are always having lower psychosocial health complaints. Therefore, cognitive factors are essential for health promotion and for enjoying a healthy lifestyle.

A well-rounded fitness programme should be designed to improve all aspects of fitness compared to practising only one element, such as only strength, agility or cardio/respiratory endurance. PT students in particular need a comprehensive fitness programme that specifically addresses their unique needs through focussing on specific skills. Wood et al.26 advised physical trainers to carefully judge initial physical performance before designing training programmes with different entry points to satisfy trainee needs. Moreover, individuals should be working relentlessly on achieving the triangle of physical, emotional and mental fitness to improve the overall health-related quality of life.

Adult students, particularly PT students, should have adequate physical fitness. Therefore, the fitness programme should emphasise on having healthy weight, engaging in regular moderate-to-vigorous PA and having a healthy lifestyle with no risk factor.

Acknowledgement: We are grateful to the Deanship of Scientific Research at King Saud University.

Source of Funding: The Research Centre of the Female Scientific and Medical Colleges, Deanship of Scientific Research, King Saud University.

9.       El-gohary TM, Emara HA, Al-shenqiti AM, Ibrahim MI. Interpretation of isokinetic peak torque of hamstring and quadriceps muscles and its correlation with the flexibility of these muscles in Saudi-adolescents males. IJHRS. 2019; 8:85-94.

17.     Sammito S, Gundlach N, Böckelmann  I. Correlation between the results of three physical fitness tests (endurance, strength, speed) and the output measured during a bicycle ergometer test in a cohort of military servicemen. Mil Med Res. 2016; 3:12

at the anaerobic threshold with the Borg CR-10 scale. J Sport Sci

Comparison of RPE (Rating of Perceived Exertion) scales for