Objective: This study aims to evaluate the serological, radiological and epidemiological analysis of suspected cystic echinococcosis patients, and to assess the positivity rate in the region.

Method: The retrospective study was conducted at Bursa Uludag University Hospital, Turkey and comprised data from January 2009 to December 2017 related to patients of either gender with suspected cystic echinococcosis who underwent indirect haemagglutination testing. Demographic and clinical data of patients who tested positive were analysed. Statistical analysis was done using SPSS 23.

Conclusion: Cystic echinococcosis was found to be a public health problem in South Marmara region of Turkey.

Cystic hydatid disease, also known as cystic echinococcosis (CE), is the most widespread zoonosis worldwide and is caused by the larval stages (metacestode) of Taeniid cestodes of Echinococcus granulosus senso lato.1,2 CE affects humans and a variety of ungulates worldwide, and it is one of the 20 neglected tropical diseases listed by the World Health Organisation (WHO).3,4 The infection is widespread, and the Mediterranean basin is considered an important endemic area.5,6 E. granulosus requires two mammal hosts to complete its life cycle; the adult tapeworm is found in the small intestine of definitive hosts, such as dogs, wolves and other canids, while the larval stage is located in the viscera of ungulates, especially sheep, goats and cattle. Ungulates act as natural intermediate hosts.7 Humans are incidental dead-end hosts infected by the larvae after the ingestion of eggs.8 Infectious larvae (oncospheres) from ingested eggs penetrate the intermediate host's intestinal mucosa, reach the blood circulation, and then develop into the metacestode stage. Cysts or infiltrative metacestode lesions occur in the liver and other organs in this stage. After the incubation period, because of the growth of the parasitic lesions, clinical symptoms appear.9 Early diagnosis decreases mortality and morbidity. Imaging modalities, such as ultrasonography (USG), computed tomography (CT) and magnetic resonance imaging (MRI), are important diagnostic tools, but serological methods are also commonly used. Serological tests are important for treatment follow-up for checking disease recurrence.10 Observation of the morphological structures of the parasite, such as protoscolex or hook. in the microscopic examination of the cyst fluid is the definitive diagnostic finding. The result of a single serological test cannot be considered significant. When anti-E. granulosus antibodies are detected with two different serological tests, it is considered a possible diagnostic finding. When the cysts are confirmed by radiological methods, the case is evaluated as that of echinococcosis.11

In Turkey, most data on CE prevalence in humans is based on hospital records, reported cases and studies based on serological methods. The current study was planned to evaluate the serological, radiological and epidemiological analysis of suspected CE patients in a tertiary care setting.

The retrospective, descriptive study was conducted at the Bursa Uludag University Hospital (BUUH) and comprised data from January 2009 to December 2017 related to patients of either gender with suspected CE who underwent indirect haemagglutination (IHA) testing. The BUUH is an 880-bed tertiary referral hospital in Bursa, which is the largest city in the South Marmara region in Turkey. After approval from the institutional ethics review committee, IHA results of suspected CE patients were obtained from various clinics. Demographic, clinical, laboratory, and follow-up data of the patients were taken from the hospital automation system. Age was categorised into 10-year brackets, starting from 0-9 years and moving up to 90-99 years. The antibodies in serum samples were detected using a commercial kit (Cellognost Echinococcosis test, Dade Behring, Marburg, Germany). The sera were diluted in V-bottom microplates and >1/64 titer level was evaluated as positive as per the manufacturer's recommendations.12

Data were analysed using SPSS 23. A chi-squared test was used to evaluate the differences. Frequencies and percentages were used to express categorical variables. Quantitative variables, depending on the distribution pattern, were expressed as mean±standard deviations (SD) or median with interquartile range (IQR). P<0.05 was considered statistically significant. 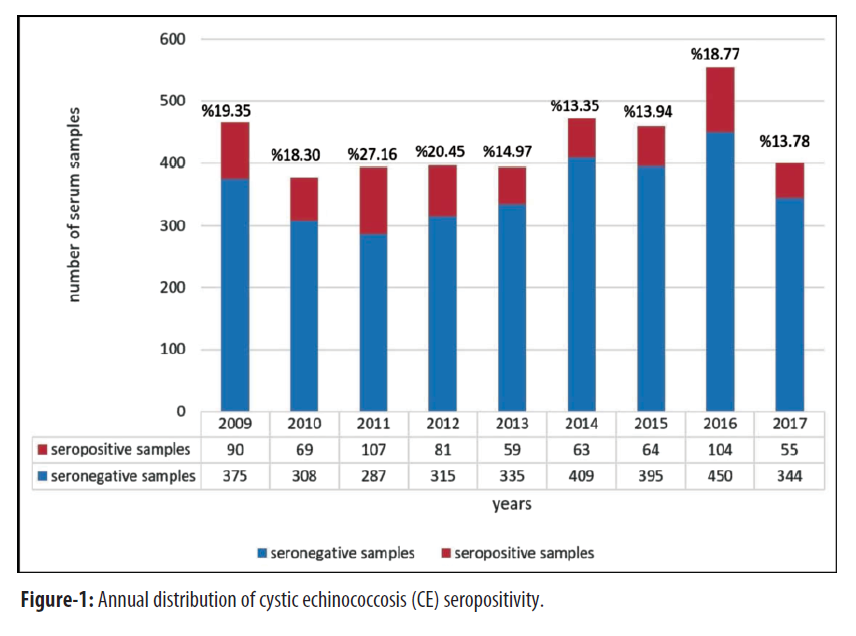 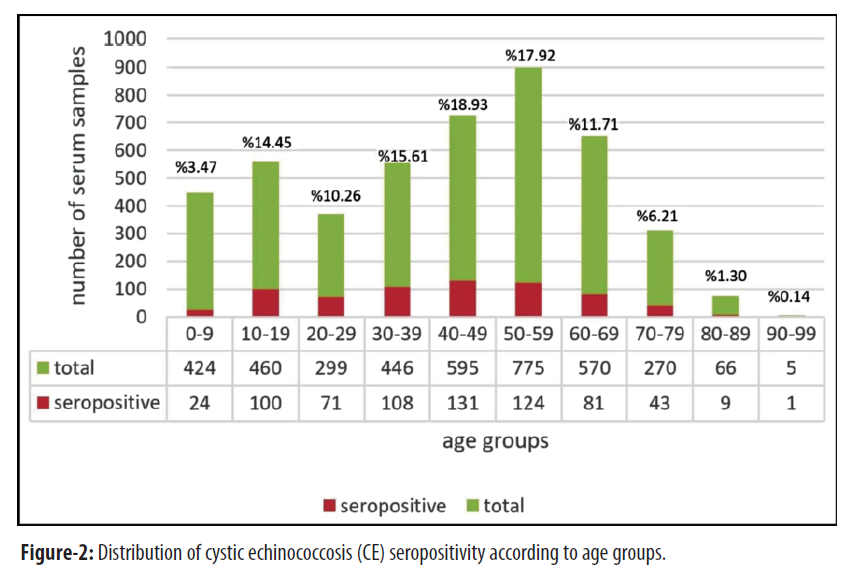 CE is considered one of the most important health problems across the Middle East, and one of the major public health problems which results in a substantial economic burden.4,5 In Turkey, CE is a neglected disease because it remains asymptomatic for years and is often not reported although doing so is obligatory. Most studies done in Turkey have been based on serological methods and they do not reflect the truth.13 The same is applicable to the current study. However, the study site is one of the biggest hospitals in the South of the Marmara region, and it is the only one providing serological testing for CE diagnosis. Global CE prevalence is >10% in endemic countries, and its incidence has been reported as 1-42 cases per 100,000 people. In Turkey, these rates have been reported to be 0.59% and 4.4 cases per 100,000 people, respectively.14,15 The National Parasitology Reference Laboratory (NPRL) of the Public Health Agency of Turkey reported that it used at least one of enzyme-linked immunosorbent assay (ELISA), IHA and Western blotting (WB) methods to diagnose CE in a total of 2,921 serum samples submitted between 2009 and 2013, and 439(15%) patients were seropositive.16 In another Turkish study, sera of 253 patients with suspected CE were analysed using the IHA test, and 32(12.7%) were seropositive.17 Another study in Turkey used the ELISA method to diagnose CE in a total of 3,446 serum samples submitted between 2005 and 2017, and 1104(32%) were seropositive.18 In the current study, IHA test was used in 3,910 serum samples submitted between 2009 and 2017, and 692(17.7%) were seropositive.

Regarding the distribution of annual seropositivity rates in Turkey, one study20 reported the highest number of cases in 2011 and 2012, while another one21 reported it to be 2012. In the present study, a significant difference was observed in the rate of seropositive results in this regard (p<0.001), and the prevalence peaked in 2011. According to official data released in October 2019, 1,506,930 bovines and 4,603,390 ovines were slaughtered in 2009, and the corresponding numbers for 2010 were 2,617,966 and 8,093,130. Respectively.22 The rising rates of seropositivity of CE after 2010 might be related to the spike in the number of animals slaughtered in Turkey.

CE was found to be a public health problem in the South Marmara region of Turkey. It is important to set up standard diagnostic methods for early diagnosis, to plan awareness programmes at different social levels, and to control the disease in different definitive and intermediate hosts.

Disclaimer: The manuscript was presented as a poster at the National Parasitology Congress, held in Eskisehir, Turkey, from September 25 to 29, 2017.