This study was conducted to determine the frequency of female sexual dysfunction in patients with urinary incontinence and lower urinary tract symptoms (UI/LUTS). Female patients between 18 and 60 years of age with lower urinary tract symptoms for more than three months were included and Female Sexual Function Index (FSFI) questionnaire was administered. Ninety-seven patients with mean age of 48±12.61 years were included in this cross sectional study. Median FSFI score of our patients was 46 (IQR34-58). Moderate to severe effect of urinary symptoms on sexual life was reported by 71 (73%) patients. When patients with sexual dysfunction (FSFI<27) were compared with those without sexual dysfunction (FSFI>27) there was no difference in age, parity, menopausal status or severity of LUTS between the two groups. We conclude that sexual dysfunction is common among female patients presenting with LUTS irrespective of age, menopausal status or severity of LUTS.

Urinary symptoms including incontinence is a common presentation in the Urogynaecology clinic. According to the current International Continence Society (ICS) terminology Lower Urinary Tract Symptoms (LUTS) can be divided into storage, voiding, and post-void symptoms.1 These symptoms can be quite bothersome irrespective of severity and can adversely affect many aspects of a woman's daily life. In particular, UI can have severe impact on women's quality of life, irrespective of the type of incontinence.

The impact of LUTS and UI on female sexual function is a relatively unfamiliar concept. Physicians are unlikely to explore it during a routine clinic visit and patients do not mention the impact of their urinary problem on sex life unless proactively asked.3  There is a complex relationship between LUTS and sexual function. Firstly, the underlying gynaecological conditions, such as endometriosis, pelvic organ prolapse, and age-related vaginal atrophy in patients with UI/LUTS, can be a causative factor for female sexual dysfunction (FSD). Secondly, urinary incontinence can lead to reduced self-esteem which may negatively affect female sexual function.4  The type of UI and LUTS is important, as the presence of incontinence, especially stress incontinence and sexual incontinence (leakage of urine during sexual activity), is most strongly associated with FSD.5 Finally, treatment of UI/LUTS may improve FSD.

There are many instruments which can be used to assess FSD and the one which includes all domains of sexuality assessment is Female Sexual Function Index (FSFI). It consists of six domains, including four phases of female sexual function and questions about overall satisfaction and dyspareunia. This questionnaire has been used for diagnosis as well as defining subcategories of FSD.6

There is scant data on the prevalence of FSD in women presenting with LUTIS/UI, especially from the Eastern world. A major reason for the lack of research on this subject is social anathemas, both among patients and physicians. Also, validated questionnaires addressing FSD were not available in the local language.7 Furthermore, there is a dearth of training on the subject even among gynaecologists. Many of these barriers are now being overcome in Pakistan by the introduction of Urogynaecology clinics. This has increased awareness about Urogynecological issues among women and they have started reporting their symptoms. To support sub-specialisation in gynaecology, the first Urogynaecology fellowship programme in Pakistan has recently been started which provides a platform for not only reporting symptoms but also encouraging research in this field.

Considering the lack of data addressing FSD among patients presenting with UI/LUTS in an Eastern conservative society, our aim was to ascertain the frequency of FSD among patients visiting the Urogynaecology clinic of a tertiary care hospital for LUTS. Since the impact of LUTS/UI on FSD is equivocal at best, we also sought to ascertain whether and how it impacts Female Sexual Function.

After approval by the hospital's ethical review committee (ERC 4202-Obs-16), a cross-sectional study was conducted done at Urogynaecology clinic of Aga Khan University Hospital, Karachi. The sample size of 96 was calculated by using hypothesised % frequency of outcome as 46% as by (7) with Confidence limits as % of 100 (absolute ± %): 10% and confidence interval of 95%. Sampling technique was non-purposive consecutive sampling. Inclusion criteria was sexually active females between the age of 18 and 60 years with UI/LUTS for at least three-months. Patients who were unwilling to participate or those with language barrier were excluded. Other exclusion criteria were: previous pelvic surgery, neurological deficit or psychiatric condition precluding the use of FSFI questionnaire. Study proforma was used to gather data related to patient demographics, types of UI/LUTS and leak accidents during sexual activity from July 2018 till June 2019. A validated standardised FSFI questionnaire which is available both in English and Urdu (Annexure-1)7 was used to  quantify their sexual function. The impact on sexual function was quantified by a single question. Response of the patient to this question was recorded on a three-point scale as mild, moderate or severe. Frequency of FSD and its various domains were recorded as per FSFI questionnaire. Patients were grouped into either having sexual dysfunction (FSFI <27) or no sexual dysfunction (FSFI >27) as suggested by Wiegel et al.6 Confounders like age, number of children, duration of marriage, number of sex partners, education, occupation, and type of LUTS and UI were controlled by stratification. P-value of <0.05 was considered significant. Data was computed using SPSS 21. 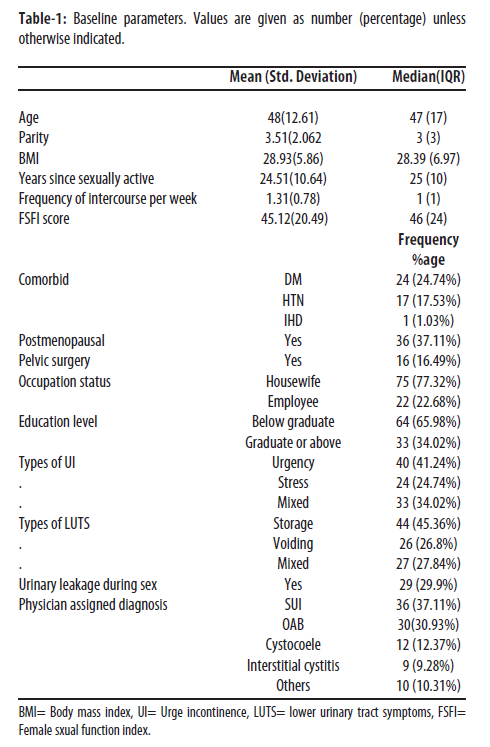 Table-1 depicts the baseline demographics. Out of the 115 patients presenting with UI/LUTS during the study, 18 were excluded and 97 were included. As many as three quarter 71(73%) patients described significant effect of LUTS on their sex life. On comparing patients with FSFI<27 with FSFI>27, no difference was seen in potential confounders between the two groups (Table-2). However, urinary leakage during sex was more common among patients with FSFI<27. 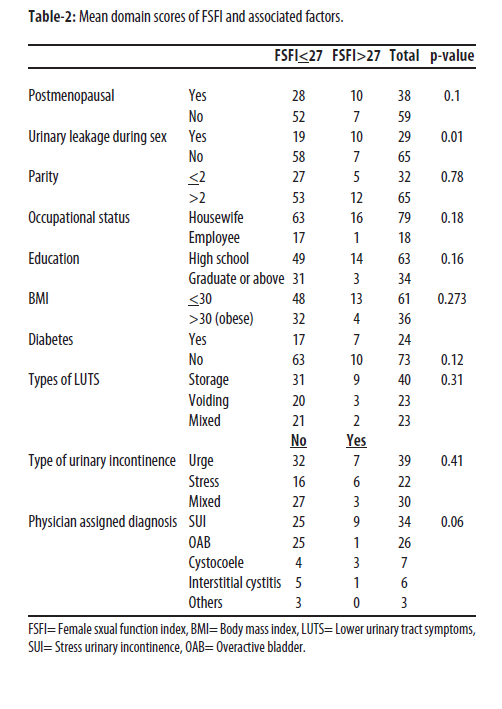 Urinary incontinence and lower urinary tract symptoms among women is a widely studied problem but its effect on female sexuality is a relatively unexplored phenomenon, especially in a conservative population like ours.8  The primary objective of this study was to observe the frequency of female sexual dysfunction in this subset of patients. It was observed that it is a very common problem in our patients. It was also noted that up to 1/3rd of these women had urinary leakage during coitus. This is similar to a recent Turkish study which has shown the presence of FSD in 11.9% of women with UI/LUTS and 24.3% women experienced coital incontinence from time to time.4  In our study among women with UI, 24% had SUI either by cough stress test or during Urodynamic studies. In recent studies it was observed that sexual function including desire, frequency of sexual intercourse and satisfaction was significantly decreased in women with SUI.9

To see the impact of associated factors like age, parity, menopause, diabetes, and BMI, two groups of women with FSFI score < or >27 were compared and it was noticed that except for urinary incontinence during sexual intercourse (p<0.01) there was no other factor with statistical significance. This is in contrast to the results of a recent systematic review which demonstrated that age, menopause, and diabetes adversely affects female sexual functions.10  In a recent similar study of 436 Turkish women a negative correlation was observed between sexual functions and UI/LUTS.4  They also noticed a negative association between severity of LUTS and impact on sex life. In our study, all individual domains were significantly affected in patients with sexual dysfunction suggesting that UI/LUTS negatively affects all domains of sexual function.

Due to the limited sample size, the specific predictors of female sexual dysfunction in our population could not be determined. Furthermore, as the study included women visiting a tertiary level hospital, these results may not be representative of all women with UI/LUTS. A study with larger sample size from across the country would suitably represent prevalence of the disease and predictive factors. Our research highlights a very sensitive topic in developing countries where literacy rate among women is very low and they feel embarrassed to report urinary and sexual symptoms.

Acknowledgment: We are grateful to Dr Khaleeq ur Rehman, professor and head of department of Urology at Fatima Memorial Hospital Lahore, for stimulating the idea of research on this subject and providing the original Urdu translation of Female Sexual Function Index attached as Annexure 1 with his kind permission.