Spousal violence against women in Afghanistan: Bivariate mapping of correlates

Spousal violence against women is endemic and owes its genesis to deeply entrenched socio-cultural norms. In this study 2015 Demographic and Health Survey data for Afghanistan was used to calculate the provincial prevalence and two correlates of spousal violence, and their bivariate mapping. Large differences were present in the provincial prevalence of spousal violence, having witnessed their father ever beat their mother, and acceptance of spousal violence by the currently or ever married women aged 15-49 years. In general, bivariate maps showed strong associations between spousal violence against women, its acceptance by women, and having witnessed their father beat their mother by ever married women. In an easily comprehensible manner, these maps underscore ensuring better quality of life in marital settings, higher and more equal social stature of women, and protecting their basic human rights would entail legal, social, and cultural paradigm shift.

Violence against women, in the context of intimate relationships is endemic, cuts across all cultures, geographies, socio-economic strata and is a flagrant but preventable violation of human rights that has been declared as a major public health problem by the World Health Organization.1,2 Based on 2018 data, lifetime prevalence of ever married women who experienced physical and/or sexual violence perpetrated by either a current, former husband, or male partner was 27% globally and 31% in the WHO Eastern Mediterranean region.2 During and in the aftermath of complex humanitarian emergencies, disasters, and conflicts, tend to worsen intimate partner violence.1,3

Deeply entrenched gender-based inequities and norms against women coupled with manifest power imbalance promote intimate partner violence and impede its eradication.4-7 Afghanistan, located in Central and South Asia, conducted the first Demographic and Health Survey (DHS) in 2015 that included a module on domestic violence with questions on intimate partner/spousal violence. The data collection phase of Afghanistan DHS lasted from June 2015 to February 2016. Afghanistan DHS is the only survey that provides a nationally as well as provincially representative estimates of various demographic and health indices including spousal violence against women.8 Studies using DHS Afghanistan 2015 data have reported that in a sample of 21,324 women who were selected and interviewed for the domestic violence module, 15% were married before the age of 15, with 55.54% prevalence in 15-49 years old women who had experienced some form of physical, emotional, and/or sexual violence by their current or former husbands.9,10

The Demographic and Health Survey of Afghanistan data, conducted in 2015 was used8. Permission to access and use data for this analysis was obtained from the DHS Programme. The domestic violence module was administered to a total of 21,324 either currently or ever married women aged 15-49 years. Questions in this module inquired about emotional, physical, and sexual violence committed by either current husband or former husband for currently or ever married women, respectively (Table-1). 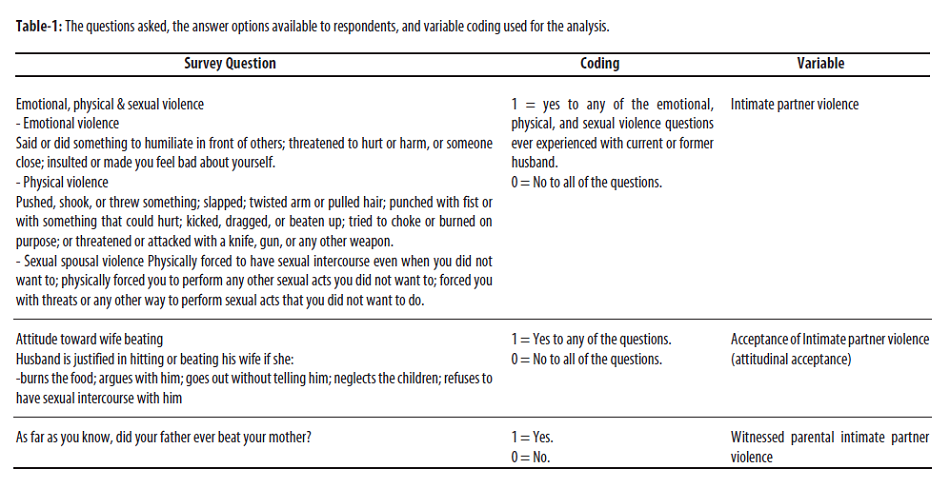 Proportion (percent) of women reporting having ever experienced any form of spousal violence perpetrated by either their current/former husband, having witnessed their father beat their mother, and acceptance of spousal violence (attitudinal acceptance) variables were dichotomized and their proportions were calculated using Stata 16 survey procedures to incorporate the complex sample design, sampling weight, while accounting for the differential probability of selection of ever married women, as reported previously.10

Afghanistan has 34 provinces, and the polygon shapefile of all provinces was obtained from the DHS website. For security reasons, DHS Afghanistan 2015 could not be conducted in the south-central province of Zabul. Map-1 shows the provinces of Afghanistan. Two bivariate maps were created, showing by province, bivariate association of having ever experienced spousal violence and acceptance of spousal violence by the respondents; and acceptance of spousal violence by the respondents and having witnessed their father ever beat their mother. The bivariate maps were created using quantile classification for each variable in R version 4.0.2. The quantile mapping method creates relatively equal data groups, with a break created at the 33rd and 66th percentiles for a three-by-three map. 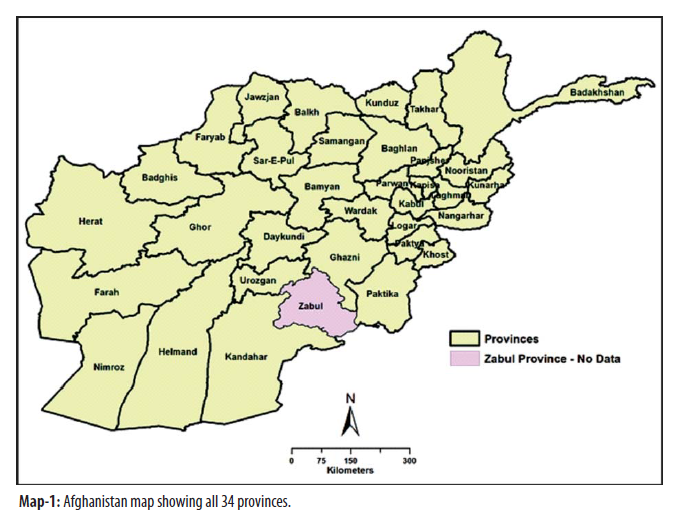 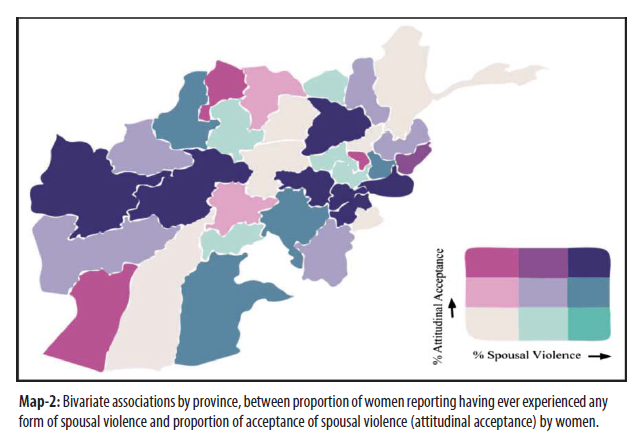 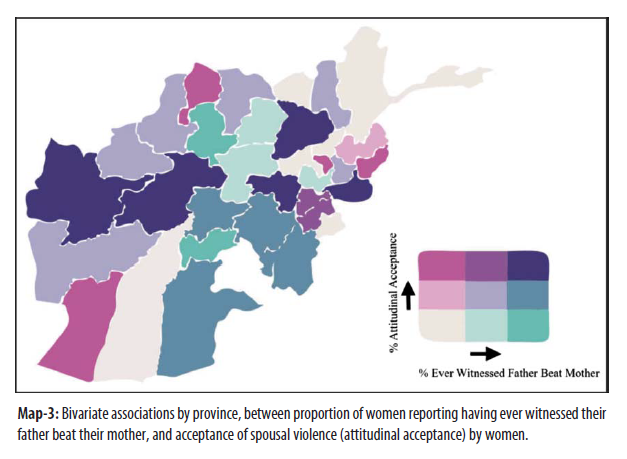 These associations reflect deeply entrenched cultural attitudes and norms towards spousal violence.9,14,15 The fact that child marriages are not uncommon in Afghanistan and only women aged 15 to 49 women were interviewed in DHS Afghanistan 2015, limits the generalizability of result to the entire population of the country.9

Consequently, results underscore the dire need to change the status quo and improve the lot of women in Afghanistan. Hence, to ensure better quality of life in marital settings, higher and more equal social status of women, and protecting their basic human rights would entail legal, social and cultural paradigm shift.

The Afghanistan DHS report states that 'National Action Plan for Women of the Afghanistan' the Ministry of Public Health's five-year 'National Gender Strategy', as well as Article 14 of the 'Elimination of Violence against Women law' are cognizant and are some of the endeavors to address the public health problem of spousal violence.10 The bivariate maps presented here further underscore the gravity, and magnitude of this problem in an easily comprehensible manner.

Spousal violence prevalence varies by provinces in Afghanistan and shows strong associations with acceptance of this disturbing behaviour and women having witnessed such behaviour in their own families while growing up. Bivariate maps can be a powerful tool to depict such associations in a simple way, highlighting the plight of spousal violence victims.

3.       Stark L, Warner A, Lehmann H, Boothby N, Ager A. Measuring the incidence and reporting of violence against women and girls in liberia using the "neighborhood method". Confl Health 2013; 7: 20.