Colloid cysts are a group of CNS neoplasms that usually present with features of CSF flow obstruction. The treatment is by microsurgical, endoscopic or stereotactic techniques. Hydrocephalus usually resolves postoperatively, but in around 3-7% of cases symptoms persist and ultimately require CSF diversion. Several factors such as operative approach, cyst size, operative time, intraoperative bleeding may influence the need for CSF diversion but most of these are yet to be statistically proven. Existing literature is mainly focused on incidence of CSF diversion after resection of colloid cyst rather than the factors which may predict its necessity and extensive research is required to accurately determine these factors.

Colloid cysts, a relatively uncommon group of intracranial neoplasm, generally come to attention due to Cerebrospinal fluid (CSF) obstruction causing hydrocephalus and predominantly exhibit features of raised intracranial pressure. Management via microsurgical, endoscopic, or stereotactic approaches seeks to resolve hydrocephalus but around 3-7% and occasionally as high as 25% patients experience persistent symptoms which eventually mandates CSF diversion procedures.1-3 The need for postoperative CSF diversion in colloid cysts has been recognized earlier but little current consensus exists to appropriately determine its predictability.

Colloid cysts are congenital, slow-growing, benign, cystic lesions found almost always in the third ventricle located near the roof of the anterior aspect, at or near the interventricular foramen of Monro behind the fornices.1,2,4-8 Nearly 60% of these remain asymptomatic and are found incidentally on brain imaging.1,2,6 The presentation may be non-specific and patients usually demonstrate features of raised intracranial pressure due to the obstruction of the CSF pathway.6 Diagnosis is made upon the clinical picture and radiological evidence6 (Figure-a, b). 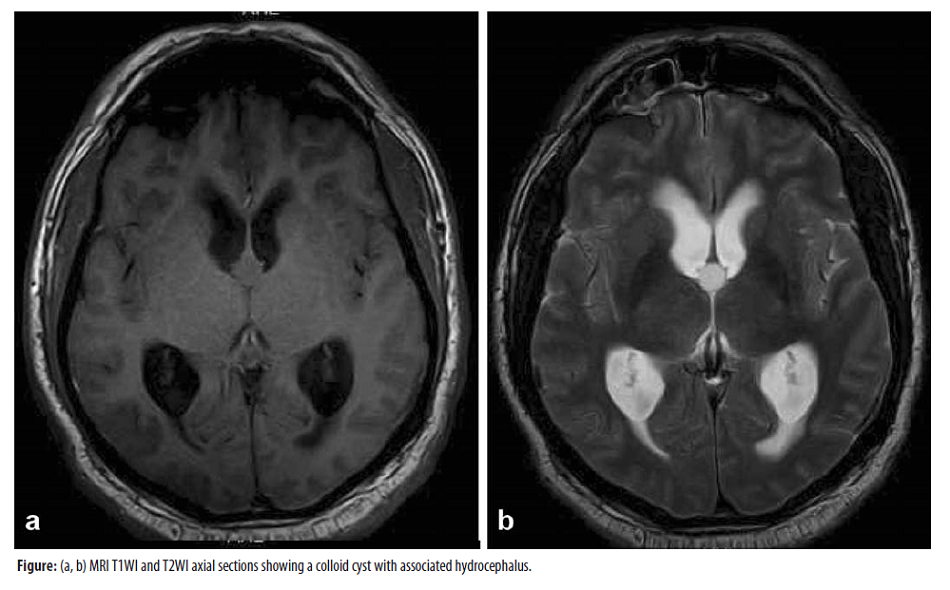 Management is focussed on the removal of cysts and the resolution of hydrocephalus via open microsurgical, endoscopic, or stereotactic techniques.2,4,6,8,9 Open microsurgical options include transcortical transventricular and interhemispheric transcallosal approaches.9 The endoscopic technique involves fenestration, aspiration and subsequent removal of the cyst.4 Stereotactic aspiration involves decompression only and is not the preferred treatment option due to higher recurrence rates.8,9 Surgery aims to achieve complete resection and symptom resolution with minimal brain manipulation.2 Failure to achieve gross total resection (GTR) or the presence of cyst remnants cause recurrence in 50% of cases who ultimately need CSF diversion, cyst aspiration, or Ommaya reservoir insertion.4

Microsurgery is associated with a significantly greater extent of resection, higher gross total resection, less recurrence and reoperation rates; whereas, the endoscopic approach is associated with less overall morbidity.3,9 While the mortality remains same for both the microsurgery and the endoscopic approaches.3 Stereotactic technique has lower morbidity and mortality along with the advantage of procedural simplicity, but has high recurrence rates ultimately requiring more definitive treatment.10

Obstructive hydrocephalus, the principal cause of colloid cyst symptomatology, usually resolves after cyst resection, but nearly 3-7% (maximum 25%) patients experience persistent, new, or recurrent hydrocephalus even after surgery and require either a temporary or permanent CSF diversion procedure by means of an external ventricular drain (EVD), ventriculoperitoneal shunt (VPS) or endoscopic third ventriculostomy (ETV).1,2 Serial lumbar punctures have been found to be a useful means of reducing intracranial pressure in patients with other causes of hydrocephalus, but in the case of colloid cysts, they may exacerbate obstruction due to downward movement of cyst and lead to acute deterioration.11 The usefulness of serial lumbar punctures after colloid cyst resection has very rarely been a subject of discussion in the literature.

The cause may be an obstruction in the CSF pathway due to blood or cyst residuals following subtotal or incomplete resection or oedema blocking the third ventricular inflow and outflow tracts.5 The former may be predicted intraoperatively and managed with the prophylactic placement of an EVD while the latter may present with an acute rise in intracranial pressure necessitating VPS.5 Nevertheless, some surgeons prefer not to place an EVD regardless of intraoperative bleeding and prefer to irrigate and flush the ventricles instead, aiming to remove blood clots until clear CSF is visualized.12 Cyst recurrence or the formation of a glial membrane hindering CSF flow may also lead to late hydrocephalus with a recurrent presentation, and validates treatment with VPS or endoscopic removal of glial membrane combined with an ETV.13

The frequency of patients requiring a shunt may be influenced by surgical approach, cyst size, longer operative times, intraoperative bleeding, irritation of ventricular walls, the extent of resection, cyst content spillage, and surgeon-defined threshold for shunt insertion.1,2Many of these parameters, however, lack concrete evidence to either support or oppose their association with the risk of postoperative shunt requirement.

Weaver et al. in a 20 year-long retrospective analysis, determined that the risk of the requirement of postresection shunting is directly related to the size of the colloid cyst, but is not influenced by preoperative ventricular volumes.1 Colloid cysts with a mean initial volume of 1.8 cc was associated with postoperative VPS; while, those with mean initial volumes of 0.9cc were not.1

Several studies determine the rate of postoperative CSF diversion following different surgical preferences among their study population. The transcallosal transforaminal approach was analyzed in 80 colloid cyst cases by Symss et al., in a both retrospective and prospective study where CSF diversion procedures were required in only 4 cases presenting with acute hydrocephalus after resection.5 Nair et al., in a retrospective case series of 293 cases found 14 patients to require postoperative CSF diversion via VPS or ETV due to persistent and symptomatic hydrocephalus.14 Hernesniemi et al., also found 1.5% of 134 patients to have needed CSF diversion in the post-operative period after interhemispheric far lateral transcallosal approach.15

The outcomes for endoscopic procedures were similarly reviewed. In a study involving 74 patients who underwent endoscopic resection of third ventricular colloid cysts, four patients needed EVD placement in the postoperative period.16 Their analysis also showed that patients who did not undergo preoperative EVD insertion, did not require it postoperatively either.16 In another analysis of 58 cases by Stachura et al., 15 patients demonstrated hydrocephalus after resection.13 Two of these had developed exclusively postoperatively while others simply did not resolve completely. Reoperation was warranted in 7 cases, 5 with a VPS and 2 with endoscopic removal of adhesions.13 A similar retrospective case-cohort of 56 patients undergoing anterolateral neuroendoscopic technique revealed that 7 patients underwent subsequent surgeries for hydrocephalus developed after resection. Three of these had VPS placed, 3 underwent ETV and one had endoscopic adhesiolysis.17 Samadian et al., described the need for temporary postoperative CSF diversion via an EVD in 68 (60%) out of 112 cases endoscopically treated while 4 (3.5%) required a permanent diversion in the form of VPS.18

In a meta-analysis of 11 studies involving 131 patients, Elshamy et al., compared the outcomes of transcallosal, transcortical, and endoscopic approaches for colloid cyst excision.2 They observed the transcallosal approach to be related to a higher incidence of postoperative shunt dependency(10.8%) vs transcortical (7.0%) or endoscopic (4.9%) technique, but the comparison was not statistically significant (p=0.39 and 0.11 for transcortical and endoscopic excision, respectively).2 However, this aligned with the findings of Weaver and colleagues, since they had transcallosal surgeries performed for larger highest mean cysts size (8-50mm) in contrast to endoscopic or transcortical approaches where the highest mean cyst size was 5-30mm.2 Sheikh et. al., in their meta-analysis of 1278 patients, also did not identify any difference between the rate of postoperative CSF shunt requirement for microsurgical (6.2%) and endoscopic (3.9%) groups.3

The existing weight of literature regarding the need for CSF diversion following colloid cyst excision mainly focuses on its incidence. Studies, mostly limited to retrospective and a few prospective models identify certain preoperative, intraoperative, and postoperative determinants of postresection hydrocephalus in these patients, but a great deal of investigation is required to conclusively predict the necessity of CSF diversion procedures after treatment of third ventricular colloid cysts.