Palmaris longus is a muscle that is located in the anterior compartment of the forearm. Among the muscles belonging to the flexor compartment of forearm, palmaris longus is located at the most superficial position and that is why it is easy to access. It exhibits high variability and its prevalence ranges between 1.5% and 63.9%. The knowledge of prevalence of agenesis of palmaris longus is essential both in terms of updating anatomical information and also for physicians, radiologists, physiotherapists and surgeons. The surgeons must know about the variability as it may be beneficial while they plan surgeries involving the palmaris muscle as a graft. The current narrative review was planned to highlight the variability pattern of palmaris longus muscle in terms of prevalence, gender and laterality. Palmaris longus agenesis is more common in females and on the left side. Besides, unilateral agenesis is more common compared to bilateral agenesis.

Palmaris longus (PL) is a muscle that is located in the anterior compartment of the forearm.1,2 Among the muscles belonging to the flexor compartment of the forearm, PL is located at the most superficial position.3 The muscle is proximally attached to the median epicondyle, while distally its attachment is on the palmar aponeurosis.2,4 PL acts as a weak flexor of the forearms1 along with tensing the palmar aponeurosis.5 In case the muscle is absent, other muscles in the forearm take over its actions.6 PL is considered to be among the muscles which show high anatomical variability.7-9 The variability differences are attributed to the phylogenetic regression.10

The tendon of PL being superficially located can be identified clinically. There is a total of 11 tests that can be used for that purpose. As PL is a muscle that has the highest variability, its prevalence ranges between 1.5% and 63.9%.11 A research conducted in eastern Nigeria documented the agenesis to be 3.7%.4 A research conducted on cadavers in Iran documented the prevalence to be 36.3%.12 Similar prevalence was mentioned in a cadaveric study done in Poland.8 An interesting study conducted in a village in Ukraine revealed that the individuals born before 1945 presented with agenesis prevalence of 70% while the agenesis prevalence decreased by 23% in those who were born after 1945.13in females compared to the males.4 A study on the intrauterine foetuses documented that there were no differences in terms of PL agenesis between the genders.7

The agenesis of the PL muscle does not result in disability as its absence does not affect the daily chores. Across the world, when it comes to reconstructive surgeries, the tendon is a preferred choice for grafting surgeries. 8,16 The tendon of PL is considered a good choice in reconstructive surgeries because the muscle tendon can be accessed easily as it lies in close proximity to the hand.15 Okafor et al. documented that the tendon of PL is frequently used as graft for hand and reconstructive plastic surgeries.4 The use of PL tendon has also been stated in the ligaments and tendon surgeries17 along with chin and lip restoration procedures.5 The insight about PL muscle is of vital importance for physicians, radiologists, physiotherapists and surgeons. The surgeons must know about the variability as it may be beneficial while they plan surgeries involving the PL muscle as a graft. The current narrative review was planned to highlight the variability pattern of PL muscle in terms of prevalence, gender and laterality.

The narrative review comprised literature search on Google, Google Scholar and PubMed databases of relevant publications from 2015 to 2020. The search of articles was done by using the key words; palmaris longus, agenesis, absence, prevalence, gender, clinical examination. Articles included were in the English language reporting clinical examination of the agenesis of plamaris longus, and those that mentioned PL prevalence along with details related to right-sided, left-sided and bilateral agenesis in frequencies and percentages in male and female subjects. Articles in any language other than English, with incoherent tables and those that did not mention the results in terms of frequencies and percentages were excluded. 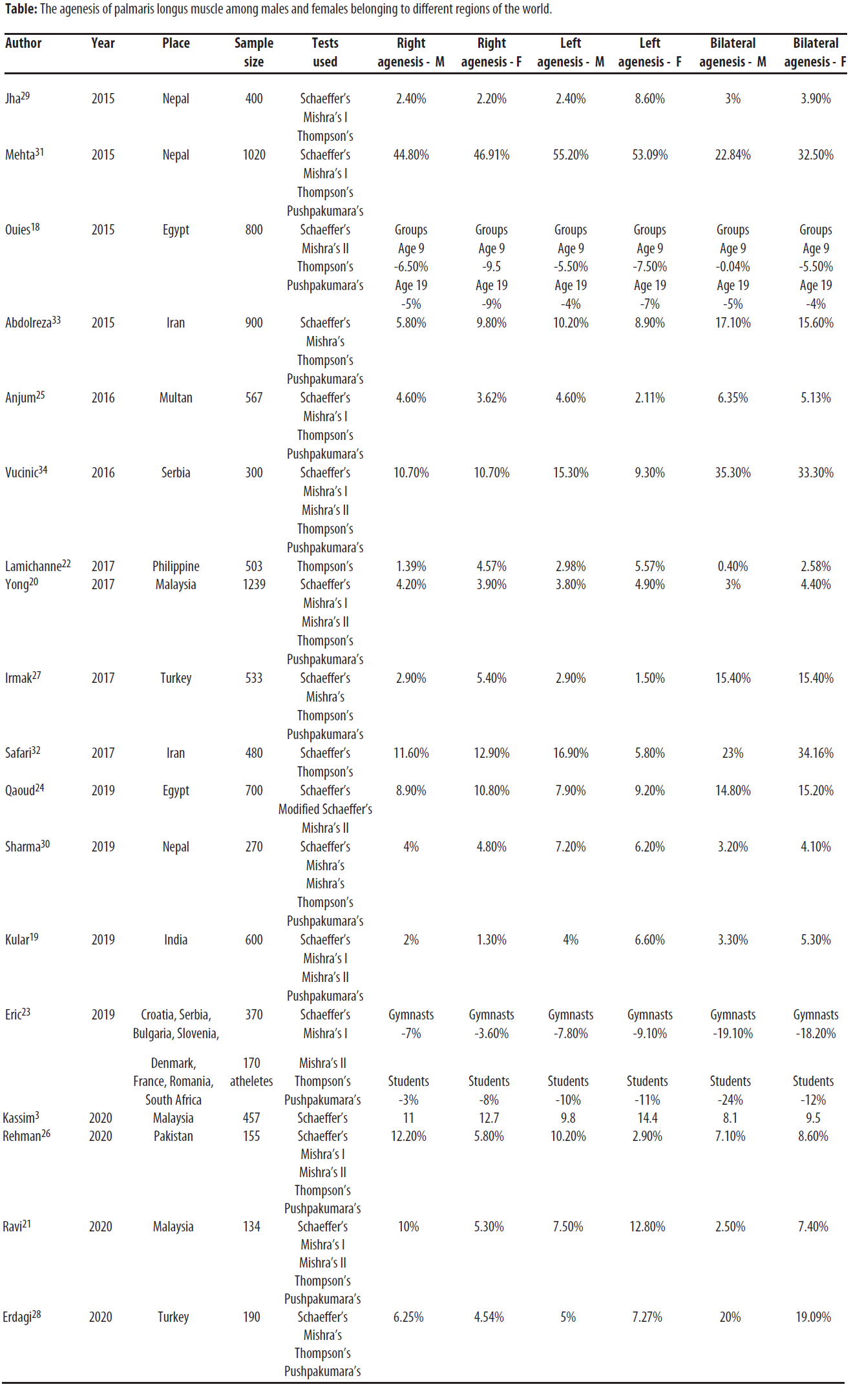 Tests used: Various studies incorporated different tests to record the agenesis of PL muscle. Clinical examination can be done by incorporating the most simple and the most reliable method, called the Schaeffer's test. The studies confirmed the agenesis by using one to seven tests, with only a few studies using a single test.3,22 Only one research was based on two tests.32 Majority of the researchers used the Schaeffer's test. In case Schaeffer's test was not able to visualise the tendon of PL, other tests were also used to ensure the absence or presence of the muscle tendon. Some studies were based on three tests,24,29 while majority of the studies used four tests.18,19,25,27,28,30,31,33 Four studies were based on five tests,20,21,26,34 while one study employed the use of seven tests.23

Association of ethnicity with PL agenesis: There are ethnic differences in the prevalence of agenesis. A study on Malay population reported the prevalence of PL absence to be 11.7% which was higher than the Chinese population but lower than that of the Indian population.3 The highest values of bilateral agenesis were noted in the Indian ethnic group than the Malay and the Chinese. Both unilateral as well as bilateral agenesis was lesser in the Chinese participants.3 The study presented an adaptive evolutionary logic reporting that since the Chinese use chopsticks, the agenesis is the lowest in that community.3

33.     Abdolreza B, Samere DS, Mohajer AJ, Hasan VS, Massood E. The prevalence of palmaris longus absence in the city of Kerman in Iran and the relevance of age, gender and body side. Int J Curr Res. 2015; 7:45.