Early suspicion can save lives; mucormycosis in two children with diabetic ketoacidosis in Pakistan

Mucormycosis is a cause of fulminant necrotising fungal infection in children with underlying immunocompromising conditions. Rhino-orbito-cerebral infection is its most common form in the paediatric group with uncontrolled diabetes mellitus or diabetic ketoacidosis. The initial presentation can mimic a bacterial infection; thus a high index of suspicion is needed for timely intervention to reduce morbidity and mortality.

We have presented a case of rhino-orbito-cerebral mucormycosis (ROCM) in two patients with diabetic ketoacidosis for the first time from Pakistan. Both the patients couldnot survive due to extensive disease on late presentation.

Mucormycosis, formerly called zygomycosis, belongs to the family of mucoraceae, is a rare but very aggressive angioinvasive fungal infection. It usually affects children with underlying immunocompromising conditions but in some instances, it has occurred in children without an underlying risk factor as well.1,2 Rhino-orbito-cerebral mucormycosis (ROCM) is the most common form of mucormycosis infection3 and is most often manifested in patients with uncontrolled diabetes mellitus or diabetic ketoacidosis (DKA).3

We present two cases of ROCM in patients with diabetic ketoacidosis which unfortunately proved to be fatal due to late and extensive disease on presentation in both cases.

Case # 1: A 12 year old boy presented at the National Institute of Child Health, Karachi in August 2018 from rural Sindh, with a four weeks history of recurrent high grade fever, throbbing headache, vomiting, facial pain, and a two week history of reduced eye movement with swelling, pain, and a loss of vision in the left eye. On presentation, his vitals were temperature 99°F, pulse 112 beats per minute, respiratory rate was10 per minute, and random blood glucose was 310 mg/dl. Past medical history was significant for diabetes mellitus being diagnosed 6 months back. On presentation, he had an altered level of consciousness, irritability and acidotic breathing. There was periorbital oedema and proptosis on the left side with watery discharge. Also on examination of the oral cavity, a visible white patch was seen on the left hard palate. His urine examination was positive for ketone bodies. Arterial blood gas analysis showed a pH of 6.94 and HCO3- of 4.9 mmol/L. MRI head with contrast revealed abnormal signals in the left frontal lobe with adjacent focal meningeal enhancement and mucoperiosteal thickening involving bilateral frontal sinuses and ethmoid air cells. Left maxillary sinus on MRI also showed mucoperiosteal thickening with air fluid levels. The Computed tomography (CT) scan of the orbit and paranasal sinuses showed muco-inflammatory changes in the paranasal sinuses bilaterally, though more prominent on the left side, erosion in the wall of the ethmoid air cells, and deviated nasal septum on the right side. Nasal swabs for fungal smear/KOH came negative. A tissue biopsy was done as well and revealed right-branching aseptate fungal hyphae. Diagnosis of DKA with ROCM was made. His diabetes was controlled using soluble insulin and he was started on liposomal/lyophilized Amphotericin B (L Am B) in doses of 10 mg/kg/day. The patient was sent to neurosurgery after stabilisation but could not regain consciousness after debridement. 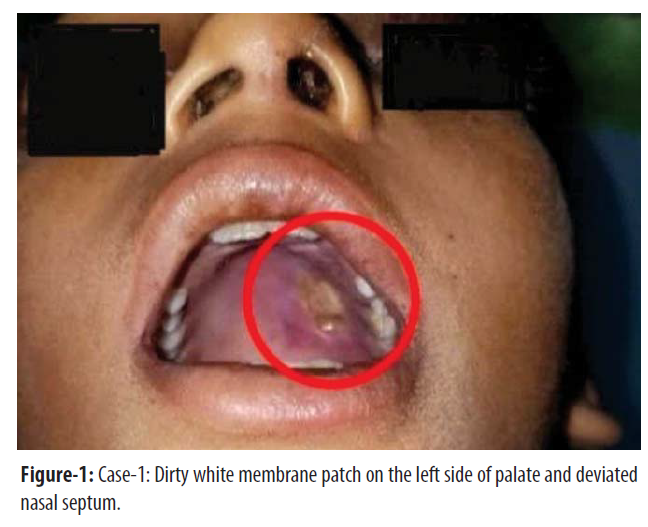 Case # 2: A 9-year-old girl was brought from Thar to the National Institute of Child Health, Karachi in June 2018 with fever and loss of vision in both eyes for 10 days and a history of seizures for 7 days. The patient was a known case of poorly controlled diabetes mellitus. On examination (O/E), she was unconscious with a GCS of 6/15. Respiratory rate 8 breaths per minute, temperature 98°F and pulse 82 bpm. The random blood glucose came out to be 283 mg/dl and urine and blood were positive for ketone bodies. Arterial blood pH was 6.70, plasma bicarbonate [HCO3] was 3.8mEq/L. On gross inspection there was an eschar over her face, involving both her eyes, palate and nasal mucosa. A provisional diagnosis of DKA with ROCM was made. She was shifted to the intensive care unit and immediately put on the ventilator. Large amounts of intravenous fluids were started plus insulin infusion, antibiotics, and amphotericin B was started as well without waiting for microbiology and imaging. She was given Amphotericin B deoxycholate at a dose of 50 mg/day diluted in 500 mL of normal saline while monitoring urine output, serum potassium, and serum creatinine levels. Diagnostic work-up was done to rule out other conditions side by side. Blood sugar levels were tried to be maintained with an infusion of regular insulin. Debridement was not preferred due to her sick condition. She did not regain consciousness in the next two days post-admission and her condition rapidly deteriorated culminating in death. 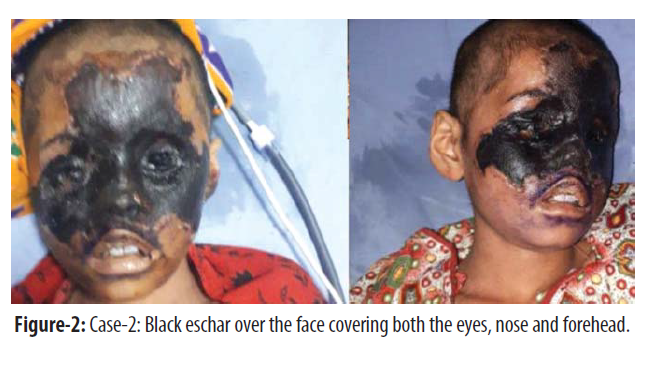 ROCM is a fairly uncommon diagnosis in children. It is usually diagnosed in patients with underlying immunosuppresive co-morbid conditions among which diabetes is the most common one. Both of our patients were brought from rural Sindh, they had DKA. At the local hospitals, they had been poorly managed, remained undiagnosed and referred to a bigger centre very late, when gross damage had been done.

In 2014, approximately 422 million people were living with diabetes around the globe, and around 1.5 million deaths were caused directly by it in 2019.4 Impaired cellular and humoral defence mechanisms in diabetes generate an inadequate response to fungal growth and proliferation.5,6 Disruption in the ability of transferrin to bind iron, and platelet function alterations in diabetic ketoacidosis permit the growth, proliferation, and dissemination of fungus.5,7 When inhaled, fungal sporangiospores swell and form buds that elongate into hyphae.5 which rapidly invade the adjacent tissues to involve the palate, sphenoid sinus, cavernous sinus to involve the orbits and ethmoid bone and thereof to the brain.6

Nasal obstruction or congestion with noisy breathing, headache, odontalgia, sinusitis, low-grade fever, facial swelling, maxillary pain, and hyposmia or anosmia might be the early presenting features5,6 Central-nervous-system involvement presents as seizures, coma, cranial nerve palsies, or hemiplegia. Orbital cellulitis with ophthalmoplegia, ptosis and deteriorating vision could be the features of orbital extension. Tissue necrosis presents as a blackened eschar indicating rapidly invasive disease and should always be looked for when suspecting a fungal infection in predisposed individuals.5,6 Eschar on histopathology, is angioinvasive with tissue destruction and infarction.5

Both MRI and CT should be done in suspected cases of mucormycosis, however, MRI is more sensitive than CT scan.8 On MRI, features of cerebritis without evidence of abscess usually indicate fungal infection.9 On a CT scan, a fungal mass can be seen as a soft tissue mass.10 Sinus mucosal thickening and thickness of extraocular muscles on CT scan becomes apparent as proptosis and bony erosion8 which is also the presentation in our first case. Histopathology, a positive culture from a non-sterile site, direct microscopy, and polymerase chain reaction could be utilised to diagnose and confirm the presence of fungus. Molecular testing for species identification2 and Nucleic acid amplification techniques for making an accurate diagnosis can be utilised.2 Under the microscope, mucormycosis appears as ribbon-like broad aseptate hyphal elements with right-angled branchings surrounded by extensive necrotic debris.8 Culture can come back negative, as in one of our cases, because it is poorly sensitive due to the fragile nature of Mucorales hyphae, which could frequently be damaged during sample collection.2

Both patients were commenced on Amphotericin B only upon arrival to our hospital. They were referred to us very late and had extensive disease on presentation hence, despite all efforts we had very little chance to save their lives. Factors associated with poor survival included late and extensive disease on presentation along with delayed diagnosis and subsequently treatment. The causes of mortality in our first case were ophthalmic and cerebral invasion, delayed surgical treatment and post-surgical complications, and in the other case, low GCS on presentation rhino-orbital-cerebral involvement, facial necrosis and fungal sepsis.

Polyene antifungals, Amphotericin B, posaconazole, and isavuconazole are currently the most active agents against mucorales,5 however, in the light of emerging resistance to antifungals, novel therapeutic approaches; new or combination modalities need to be investigated. Statins also have a potential role to play in mucormycosis treatment.2,5

Controlling underlying immunosuppression, early recognition of the disease, taking the multidisciplinary team on board, and commencement of amphotericin B with surgical intervention if needed, can lower the morbidity and mortality significantly.

Conflict of Interest: None to declare

Funding Disclosure: None to declare

Consent: Consent of the parents of the children who's cases are presented, were not obtained: Anonymity has been maintained.

Sarcoidosis: An experience from a tertiary care center in Karachi Pakistan

Is the hygiene hypothesis a plausible explanation for the asymmetry in COVID-19 mortality?

The incidence of Mucormycosis superinfection: A challenge to current Covid-19 pandemic