Sarcoidosis: An experience from a tertiary care center in Karachi Pakistan

Objectives: To assess the demographic and clinical characteristics and treatment of patients with sarcoidosis in tertiary care settings.

Method: The descriptive retrospective study was conducted at the Aga Khan University Hospital, Karachi, and comprised data from 2017 to 2019 of patients with established diagnosis of sarcoidosis.  Data was collected on a predesigned proforma and it was analysed using SPSS 23.

Conclusion: Sarcoidosis was not found to be rare in Pakistan.

Sarcoidosis is an immune-mediated disease characterised by non-caseous granulomas, a collection of epithelioid, macrophage, mononuclear, cluster of differentiation (CD)4+ T and CD8+ T cells in the peripheral zone, predominantly affecting the lungs, but with a myriad of possible extra-pulmonary manifestations in many organ systems, most commonly the lymphatic, integumentary, ophthalmic and gastrointestinal systems. Despite significant efforts over the years, the exact aetiology of sarcoidosis remains enigmatic. However, the underlying pathogenesis of the disease is widely recognised as stemming from genetic and environmental risk factors,1,2 with certain loci of the human leukocyte antigen gene as well as certain microbes, metals and minerals showing significant associations.3

The archetypal accumulation of T-cells and subsequent granuloma formation in the pulmonary microstructure highlights the implication of inflammatory response triggered by self-antigens, and is in line with the role of autoimmunity. The diagnosis is established on the basis of clinical presentation combined with a suggestive radiographic picture, histopathological proof of non-caseating granulomas, and excluding other diseases with similar presentations, such as tuberculosis (TB) and malignancy.4 Currently, the first-line treatment is corticosteroid therapy, with alternate regimens including other immunosuppressive drugs, of which the most preferable in current literature is methotrexate.2

Sarcoidosis is often considered a disease of the middle-aged population, with a female preponderance. The prevalence and incidence of sarcoidosis significantly varies across geographical boundaries and racial groups.2,5 In Asia, a longitudinal nationwide study in South Korea reported sarcoidosis prevalence and incidence of 3.4 and 1.3 per 100,000 population, respectively.6 However, the burden of sarcoidosis in southeast Asia is not certain due to paucity of literature. In addition, sarcoidosis has also been misdiagnosed and under-reported up until recent years and especially in nations where TB is highly prevalent.5

To the best of our knowledge, literature regarding sarcoidosis in Pakistan is meagre and only a few studies have been published on the matter. There has been a case series epidemiological study regarding sarcoidosis which cited 43% prevalence among patients with isolated mediastinal lymphadenopathy.5 Another study demonstrated sarcoidosis as frequently misdiagnosed with TB.7 The current study was planned to assess the demographic and clinical characteristics and treatment of patients with sarcoidosis in tertiary care settings.

The descriptive retrospective study conducted at the Aga Khan University Hospital (AKUH), Karachi, a tertiary care centre, and comprised patient data from January 2017 to November 2019. After approval from the institutional ethics review committee, data was retrieved from the interstitial lung disease (ILD) registry which has been maintained since January 2017, and which has assisted in determining the epidemiology and characteristics of this rare disease. The data related to patients of either gender aged >18 years with established diagnosis of sarcoidosis based on the presence of non-caseating granulomas on high-resolution computed tomography (HRCT) as per Pakistan Chest Society (PCS) guidelines,8 and/or biopsy of the involved organ by a consultant pulmonologist.  Data of patients with active TB and those with other ILDs, like idiopathic pulmonary fibrosis or connective tissue disease, was excluded.

All patients within the 2-years timeframe were recruited, eliminating the need for random sampling.

Data was analysed using SPSS 23, and was presented as frequencies and percentages. 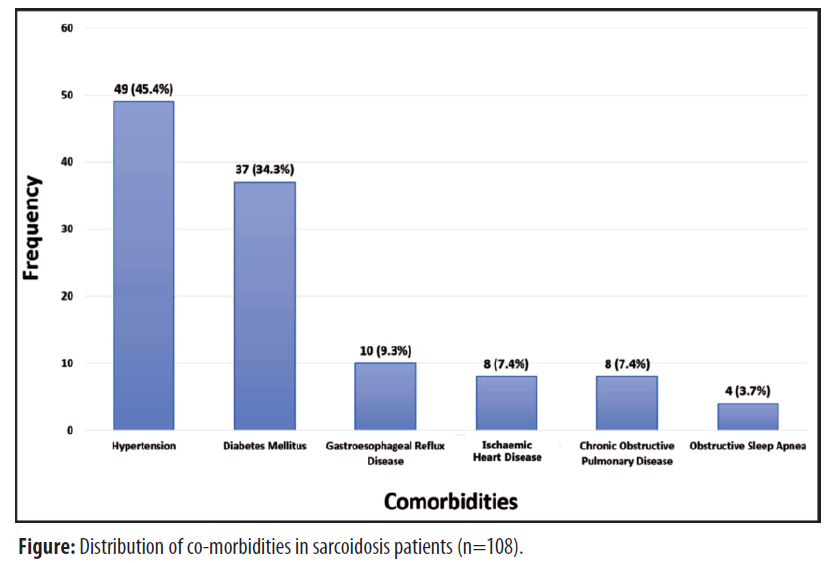 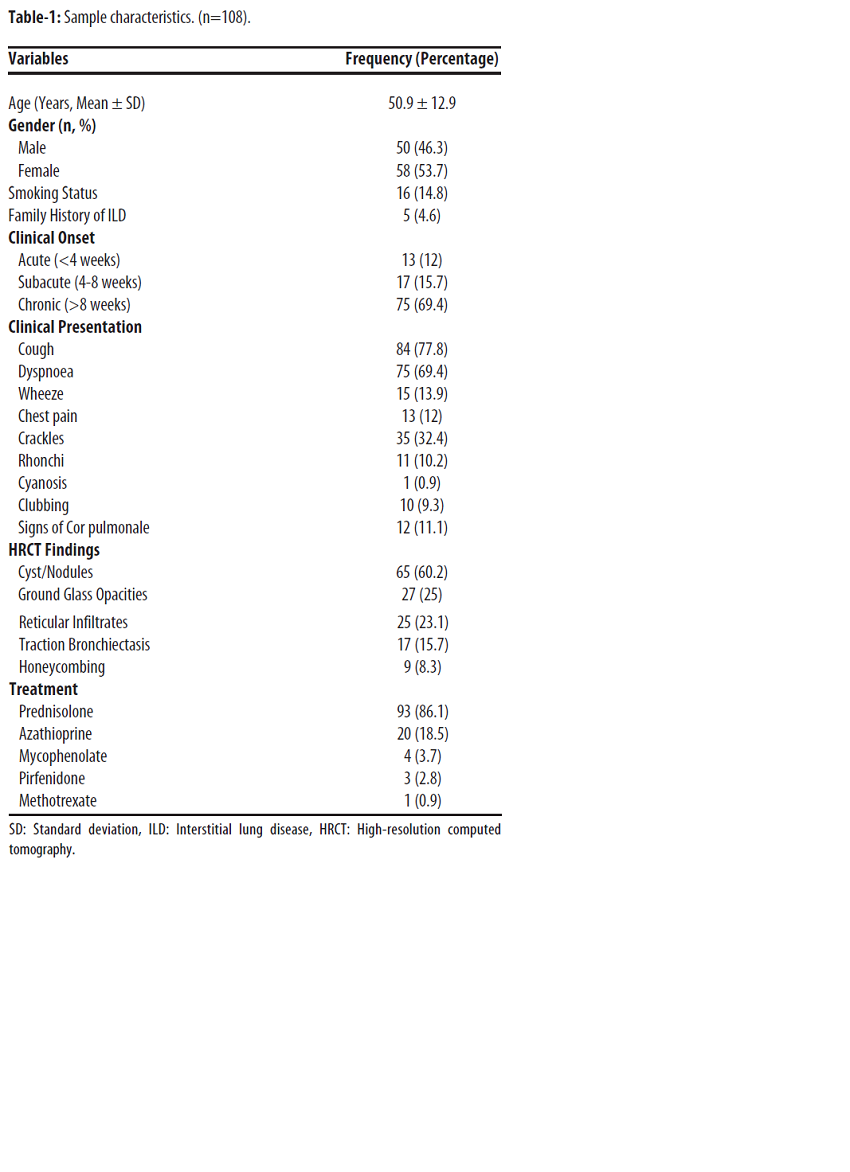 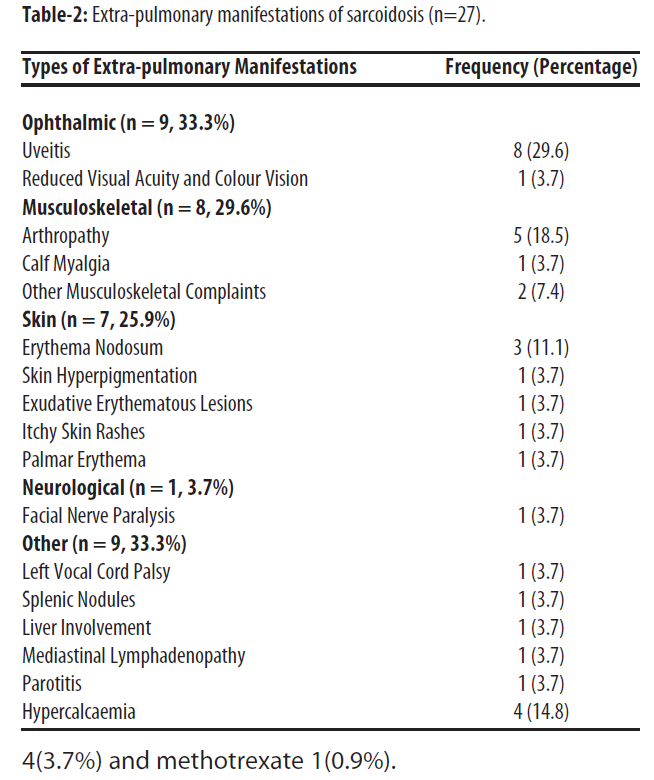 The findings are in line with an earlier study done in Pakistan.5 There was female preponderance. The prevailing theory regarding the gender-specificity of the disease implicates sex hormones in the pathogenesis of the disease. Female patients usually tend to present after the onset of menopause when the protective role of female hormones begins to decline.9 Despite a pattern of early onset, a trend of old-age sarcoidosis (>50 years) has also been cited in literature.2 However, late onset of the disease has been found to be more prevalent among females, which is often why the mean age of diagnosis often skews higher in females compared to the males.10 The average age of onset of the disease among females in this study was 52.

The relationship between smoking and sarcoidosis is still ambiguous. According to a case-control study, there was statistically no significant association between smoking and sarcoidosis.11 The age and gender-adjusted odds ratio (AOR) of current smokers versus non-smokers was 0.34. In this study, only 14.7% of the patients were smokers, a consistency that should be explored in further studies.

The clinical manifestations of sarcoidosis can vary greatly based on the severity of the disease and the involvement of organs.12 In the present study, the majority of patients presented with chronic pulmonary and extra-pulmonary symptoms. In fact, over two-thirds of the patients reported chronic complaints (>8 weeks). The presenting complaints were predominantly respiratory symptoms.

In sarcoidosis the lungs are involved in >90% of the patients and prominent symptoms include cough and dyspnoea.12 The prevalence of cough in patients with sarcoidosis is reportedly 3-53%; 3% in Japan, 33% in Finland, 40% in Saudi Arabia, 50% in United Kingdom and 53% in Turkey.13 While in the current study 77.8% patients presented with cough. The exact trigger of the cough reflex mechanism in sarcoidosis is unknown, but it is hypothesised that granulomatous inflammation causes the sensory fibres of the vagus nerve that contributes to the afferent and efferent limb of the cough reflux to become sensitised.14 Parenchymal lung disease occurs in a significant number of patients, and the hallmark of this is dyspnoea.15 The current data correlates with this finding.

Nonspecific findings were seen on clinical examination, with the most prominent finding being crackles on lung auscultation (32.4%), while a few patients exhibited signs of chronic hypoxia, such as clubbing (9.3%) and signs of cor-pulmonale (11.1%). Crackles on auscultation are characteristic of other ILDs, but are usually absent in sarcoidosis due to the difference in distribution of parenchymal fibrosis.16

The most common extra-pulmonary finding in the current study was uveitis (29.6%) which is consistent with literature.19 Studies suggest that cutaneous sarcoidosis is present in 20-35% of sarcoidosis patients and is a very frequent extra-pulmonary manifestation of the disease.20 Such cutaneous lesions were found in 25.9% patients in the current study.

Some patients in the current study had facial nerve paralysis (3.7%). This is considered to be an early sign in the development of neurosarcoidosis. Primary symptoms of neurosarcoidosis include cranial nerve palsies, meningeal irritation, and inflammatory disease of the spinal cord. Facial nerve palsy is the most prevalent clinical manifestation of the disease and is known to occur in up to 50% of cases with neurosarcoidosis and thus can be an important tool in diagnosing the underlying disease.21

A prevalent complication of sarcoidosis is hypercalcaemia which occurs in 10-20% of the cases.23 In the current study, 14.8% patients with sarcoidosis demonstrated hypercalcaemia. The reason for hypercalcaemia is not well understood, but it is widely accepted that it is either due to the unregulated production of parathyroid hormone-related peptide (PTHrp), or the increase in 1-a-hydroxylase activity by granuloma cells seen in sarcoidosis.23

The treatment of sarcoidosis varies from patient to patient. Firstly, not all patients require treatment, especially those with a lack of symptomatic disease. It is documented that spontaneous remission ensues in 55-90% with stage I sarcoidosis, 40-70% with stage II and 10-20% with stage III.5 Medication is suggested only in cases where clinical manifestations of the disease are progressive, disabling and life-threatening. Use of corticosteroids is the mainstay of therapy in cases where patients do not undergo spontaneous remission and in whom organ damage is imminent. In the current study, 86.1% patients were on prednisolone therapy which is in accordance with the local data.5 Immunosuppressive therapy is reserved for patients who are unresponsive to corticosteroids or in those with severe extra-pulmonary manifestations and as a corticosteroid sparing therapy.2 The second most widely used treatment option in the present study was azathioprine (18.5%). Methotrexate, which is a folic acid inhibitor, is a second-line regimen which is more commonly used for chronic sarcoidosis. Only 1% of the patients in the present study were on methotrexate therapy. The low utilisation of methotrexate can be attributed to lower compliance, as documented in rheumatoid arthritis cases, among the Pakistani population.24 Azathioprine inhibits lymphocyte proliferation and is closely compared with methotrexate in terms of effectiveness.25

The current study has some limitations. The sample was taken from a single tertiary hospital and may not accurately represent the larger picture. Future studies are needed to validate the findings.

At 11%, sarcoidosis was not found to be as rare in Pakistan as is generally considered. The ILD registry and future multicenter studies will establish the true prevalence of sarcoidosis in the country.

Early suspicion can save lives; mucormycosis in two children with diabetic ketoacidosis in Pakistan

Is the hygiene hypothesis a plausible explanation for the asymmetry in COVID-19 mortality?

The incidence of Mucormycosis superinfection: A challenge to current Covid-19 pandemic