Role of surgery in multifocal glioblastoma

The management of multifocal glioblastomas is a point of constant discussion amongst neuro-oncologists. Best outcomes in glioblastoma management come from gross total resection (GTR) followed by concomitant radiation and chemotherapy (CCRT). Multifocal disease is resistant to GTR. Conventional management of these lesion is usually biopsy only followed by CCRT. Recent evidence has shown that there may be some benefit to attempting GTR of the largest lesion whenever safe to do so.

Multifocal glioblastoma (mGBM), formerly considered uncommon, is an increasingly diagnosed subgroup of the most common malignant primary brain tumour, the glioblastoma (GBM).1 The standard management of multifocal GBM is still under debate. Surgical or stereotactic biopsy has been recommended for diagnostic authentication but the benefit of surgical debulking is yet to be established in the definitive management of multifocal glioblastoma.2

Multifocal glioblastoma account for around 20% of all GBMs.1-5 By definition, glioblastomas are termed multifocal when multiple distinct foci of tumour enhancement are encountered demonstrating microscopic connections or a clear parenchymal dissemination route on fluid-attenuated inversion recovery (FLAIR) sequences of Magnetic Resonance Imaging, which is additionally the basis of their differentiation from metastatic disease as well as the less commonly encountered subgroup, multicentric glioblastoma (Figure).1,5,6 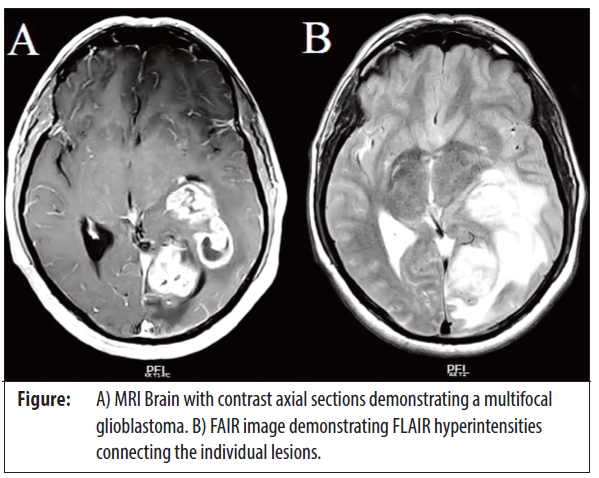 Multiple lesions of mGBM can occur either synchronously or metachronously and maybe connected via white matter tracts, gray matter, neurons, blood vessels, meninges, cerebrospinal fluid or the ventricular systems and dissemination widely occurs via the meningeal-subarachnoid space.1,7 These are more common in the supratentorial region though a combined supra and infratentorial involvement has also been observed.2 Presentation may range from signs and symptoms of raised intracranial pressure to sensory-motor deficits and generalized tonic-clonic seizures.2 The prognosis is considered to be generally poor for mGBM with a median survival of 7.6 to 12 months.1,4,8 Surgical resection followed by chemotherapy and radiotherapy is the standard of care for solitary GBM but no such standard treatment guidelines have been established for mGBM.1,5,8,9 Resection vs the conventionally popular biopsy-only approach for mGBM has been a subject of debate for decades.

Earlier evidence is in support of the biopsy-only custom, however, current data hugely favours craniotomy followed by surgical resection/debulking, particularly in patients with preserved performance status.3-5,7,9 This is ascribable to increased overall survival in patients undergoing resection (16.3 months) rather than biopsy alone (7 months).5,9 An exception to this was a single-center retrospective study,7 where the median survival for patients undergoing resection vs biopsy was equivalent (8.4 vs 7.5 months), though these results were described for multiple glioblastomas as a whole, with no distinction between multifocal or multicentric disease.7 Extent of surgical resection (EOR) is validated to be directly related to improved overall survival.3-5,9 A resection of greater than 27.7% of the initial tumour volume was also found to positively influence the survival probability and increase 6-month survival, but the analysis was a univariate.4

Current evidence is firmly in favour of achieving maximum safe resection for glioblastomas, whenever possible without functional compromise therefore, gross total resection (GTR) is exceedingly recommended, particularly in easily accessible tumours that are predicted to have a moderate functional impairment, with subtotal resection (STR) reserved for less accessible tumours or those involving functional brain areas.1,3,4 Haque et al., in the largest study to date, based on US National Cancer Database, described the median overall survival of 11.5 months, 9 months, and 5.8 months for gross total resection (GTR), subtotal resection (STR) and biopsy alone strategies, respectively, while a median overall survival of 17 months following GTR, was reported from a retrospective analysis of 100 patients.3,5

Several different thresholds for the extent of resection (EOR) of GBMs have been described throughout literature, each pledging survival benefit. Di et al., established the cutoff for EOR of the dominant contrast-enhancing lesion in mGBMs at 85% using receiver operating characteristic curve and identified >85% EOR to be tied to superior overall survival (22.4 months vs 8.4 months for <85% EOR), though progression-free survival did not significantly differ with greater than or less than 85% resection.9  Li et al., further concluded that complete removal of T1 contrast-enhancing lesion along with resection of a significant area of FLAIR hyperintensity was significantly profitable, without diminishing postoperative outcomes.1

Though most of the previously described studies were based on resection of a single or usually two lesions, Hasneen et al., found aggressive resection (100% EOR) of all lesions in an mGBM via multiple craniotomies in a single session, to increase survival with no rise in postoperative morbidity and the results were comparable to surgical resection in patients with unifocal GBMs.10 These are however, account for a small subset of patients in clinical practice.

In an effort to make maximum safe resection possible, GBMs can be divided into two categories, the proliferation dominant and the diffusion dominant, based on the ratio of T1 weighted contrast-enhancing area and FLAIR hyperintense region. For proliferation dominant lesions, it is advised to extend resection up to the FLAIR hyperintense area, while the diffusion dominant lesions require a less aggressive approach.1 Still further, fluorescence technology involving the use of fluorescent protoporphyrin IX (PPIX), a derivative of 5-aminolevulinic acid (5-ALA) and fluorescein sodium may help to ascertain tumour boundaries and the extent of resection, particularly in tumours involving functional regions, whereas for non-functional regions, FLAIR hyperintense signals should be employed to determine resection boundaries.1

Nevertheless, it is vital to consider further elements that add to and impact the decision for aggressive surgical resection. These chiefly include age, Karnofsky performance scale (KPS), location, distribution and number of lesions, and the probability of receiving adjuvants.1,5,7 Advanced age and a low KPS (<70) have both proved to be poor prognostic factors.5 The involvement of key structures, functional areas, subcortical areas, the spread to contralateral hemisphere and deeper invasion are also known to imply poor survival, while adjuvant therapies, whenever possible and accessible warrant improved survival.4,5 Though the greater number of lesions may indicate worse survival, as was concluded by a retrospective study on multiple glioblastomas, to directly relate multiplicity with a guarded prognosis is appearing to be a simplistic approach to determining patient outcomes.1,6,8

Literature suggests that surgical debulking offers a survival benefit and should be attempted whenever possible in the treatment of multifocal glioblastoma. However, care should be taken to consider other factors responsible for influencing the outcome of these patients including new postoperative deficits.