Objective: To find the efficacy of lactobacillus plantarum 299v compared to placebo in symptomatic improvement of irritable bowel syndrome patients.

Method: The randomised control trial was conducted at the Lady Reading Hospital, Peshawar, Pakistan, from July 20, 2014, to January 20, 2015, and comprised irritable bowel syndrome patients who were randomised into intervention group A treated with lactobacillus plantarum 299v and control group B treated with placebo. Symptoms, like abdominal pain, bloating and complete rectal emptying, were noted and compared between the groups. Data was analysed using SPSS 19.

Conclusion: No significant efficacy was established in favour of treating in irritable bowel syndrome with lactobacillus plantarum 299v.

Irritable bowel syndrome (IBS) is a gastrointestinal disease characterised by altered intestinal motility, affecting about 11% of the world’s population.1 The prevalence of IBS among different countries varies, such as 13.34% in Pakistan, 7.13% in Iran, 11.5% in China 11.5%, 20.4% in the United States, 21.65% in the United Kingdom and 14.04% in Japan.2 This variation in the prevalence of one of the most common functional disorders is attributed to the wide clinical spectrum and the different criteria used for IBS diagnosis.

IBS patients usually present with a complex of symptoms which is difficult to treat.3 These symptoms have negative impact on the patient’s quality of life (QOL). The patients suffer from severe depression with a tendency towards suicide. While getting IBS treatments, patients sometimes undergo unnecessary surgeries and invasive measures.4-6 The efficacy of the up-to-date treatment modalities for IBS is low mainly because of the heterogeneous nature of the disease pathophysiology which includes hypersensitive viscera, altered gut motility, distorted interactions of the brain with gut, intolerance to specific foods, altered intestinal permeability and inflammatory changes in the gut.7 More recently, the role of enteric infections and intestinal inflammation along with the implications of changing gut flora has been proposed in the pathogenesis of IBS.8 Based on these facts, it has been suggested that the IBS patients may have bacterial overgrowth, and the eradication or altering the gut flora may improve symptoms in these subsets of patients.9,10

To improve the immune status of patients against environmental opportunistic infections, probiotics are used. These probiotics are usually live or attenuated bacteria or bacterial metabolites.11 How probiotics improve the symptoms of IBS patients is still to be fully understood, but few concepts have been postulated with pieces of evidence. As enteric flora is thought to play some role in the disease pathogenesis,12 gut functions improve with changes in the gut flora attributed to probiotics.8 In post-infectious IBS, the disease course is altered by the antibacterial and antiviral effects possessed by many probiotic organisms.13 Anti-inflammatory actions of probiotics on the gut’s mucosal surface may decrease the firing of enteric neurons mediated by the immune system, resulting in lesser stimulus and response cycles between the gut’s mucosa and brain.14 The probiotics are considered to play a role in transforming short-chain fatty acids from the undigested carbohydrates, which, in turn, have their influence on intestinal handling of its contents by acting as nutrients for the enteric cells.15

Lactobacillus (L.) plantarum 299v is the most widely studied strain in IBS patients. It is resistant to the actions of intestinal acids and bile, colonises the human colonic mucosa and is non-pathogenic.16 While adhering to the colonic mucosal layer, it reduces the inflammation by its antimicrobial activity against many potential pathogens, importantly gram-negative bacteria containing endotoxins.17 The synthesis and secretion of the interleukin-10 (IL-10) from the macrophages and the T-cells of the inflamed colon are increased by the L. plantarum 299v which has got beneficial immunomodulatory activity.18 The lowering of the colonic potential of hydrogen (pH) by small-chain fatty acids helps in controlling the growth of the microbes in the gut, while L. plantarum 299v increases the concentration of carboxylic, acetic and propionic acids in the faeces.17

The current study was planned to compare the role of L. plantarum 299v versus placebo in symptomatic improvement in the condition of IBS patients.

The double-blind randomised control trial (RCT) was conducted at the Lady Reading Hospital, Peshawar, Pakistan, from July 20, 2014, to January 20, 2015, and comprised IBS patients. After approval from the institutional ethics review committee, the sample was raised from the Gastroenterology and Hepatology outpatient department (OPD). An online calculator for statistical power trial (https://clincalc.com/stats/ samplesize.aspx)19 was used to determine the sample size. The total sample size was enough to detect the effect with 80% power.  All adult patients of either gender fulfilling the Rome III criteria for IBS20 were included. Those having a history of major abdominal surgery, organic intestinal disease or chronic infectious diseases, like human immunodeficiency virus (HIV) or tuberculosis (TB), were excluded, and so were pregnant and lactating as well as anyone using antibiotics.

After taking informed consent from all the subjects, they were randomised into intervention group A treated with L. plantarum 299v and control group B treated with placebo. The randomisation was done using the lottery method and then patients were alternatively allotted to either of the two groups. The intervention drug contained 5x1010 cfu of L. Plantarum 299v, while the placebo comprised micro-crystalline cellulose powder, both packed identically by the manufacturers (Genetex Pharma Pvt Limited). The study drug was labelled A and the placebo as B, which was disclosed at the end of the study.

The study was registered with online registry of Iranian registry of clinical trials under registration number IRCT20200504047303N1. The intervention lasted 4 weeks and had three follow-up visits. Baseline and the first-follow up after two weeks of were face-to-face, while the second follow up, at the end of the treatment, and the third one, which was 4 weeks after finishing the treatment, were done on telephone.

Two endpoint assessments were noted and interpreted. Daily frequency of abdominal pain was considered a primary endpoint, while the secondary endpoints were improvement in the severity of abdominal pain, the severity of bloating and feeling of partial rectal emptying. Both the primary and the secondary endpoints were assessed using the Visual Analogue Scale (VAS) from 0 to 10, with 0 being normal and 10 being very severe. In each visit, the patients were examined thoroughly and all the parameters were noted along with medication compliance. The patients were advised to avoid any change in their dietary habits and intake of medicine regularly during the study period. 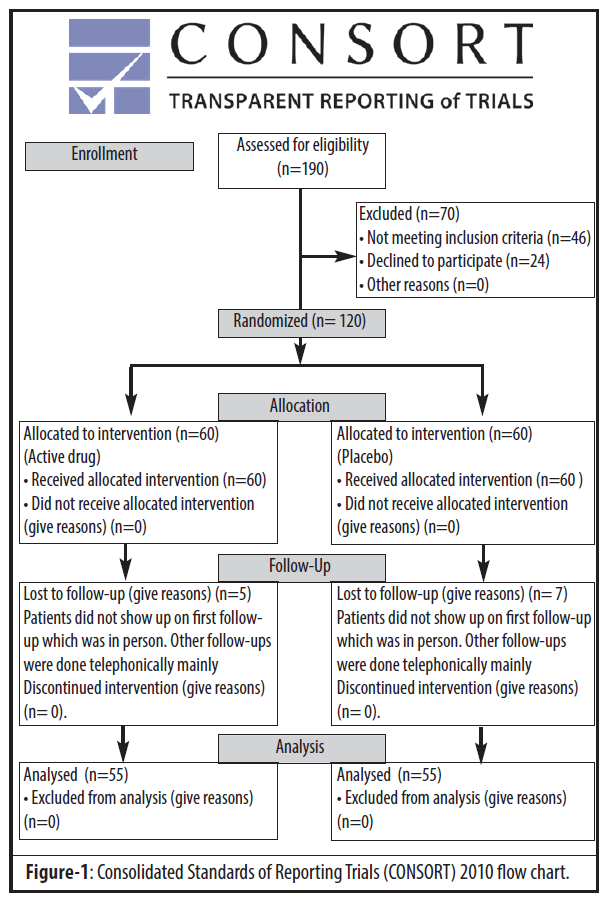 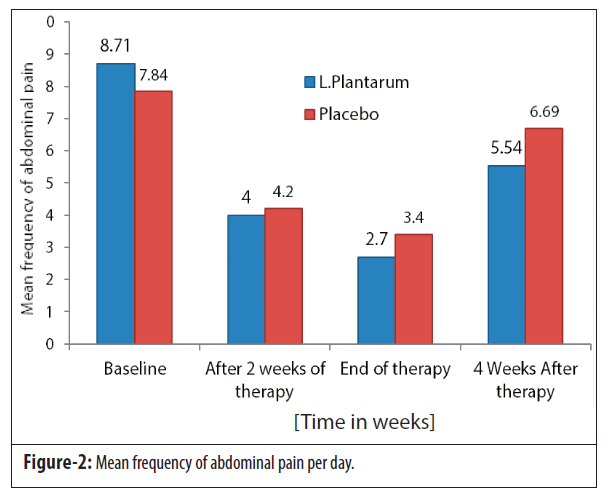 After 4 weeks of therapy, the frequency of abdominal pain had no significant difference in the groups compared to the baseline values (p=0.15). With respect to severity of bloating (p=0.34) and the feeling of incomplete rectal emptying (p=0.19) the difference between the groups was not significant (Table 2).

The endpoint assessment was also done in the context of IBS type (Table 3).

The current study included all IBS types fulfilling the Rome III criteria. Although most trials have been done in IBS with diarrhoea (IBS-D) regarding probiotics microbiological, studies indicate that changes in microbiota occur in all IBS subtypes.21 Therefore, all patients meeting the Rome III criteria were included in the current study in which most patients were males compared to other trials where approximately 2/3 of the population was female.7 The reason for male predominance is that, unlike what is reported in European countries, IBS is less prevalent in females compared to males in Asian countries.22 In the current study, there was no significant difference in treatment and placebo groups in relieving IBS symptoms. This is in contrast to a recent Indian study, a population that shows the same demographics as Pakistan.7 However, this may be due to different eating behaviours in India where a high percentage of people in the sample were pure vegetarians and half the population was consuming yogurt daily. This might have confounded the results as in that study relief in abdominal pain was more significant in the vegetarian group compared to the non-vegetarians. Furthermore, yogurt is also rich in probiotics other than L. bacillus which may be responsible for better results. This is in contrast to the current study which had people who were not strictly vegetarian. The result is suggestive of partial interaction of the luminal content and the strain with an enhancement of other probiotic strain.

In a study, the administration of L. plantarum with known probiotic properties decreased pain and flatulence in IBS patients.5 The study is a little biased because the intake of fermented products was 59% in L. plantarum group compared to the 73% in the placebo group, which may be the source of probiotic strain other than L. bacillus. Moreover, it is ambiguous that medications for IBS, like fibre supplementation and antispasmodics, were controlled or not. The information about bloating among L. plantarum and placebo groups in 12-month follow-up assessment was also not reported.5

Treatment of colonic fermentation in untreated IBS patients by L bacillus found no significant difference between the control and L. plantarum groups in a study. The study assessed symptoms daily by validated composite score and 24-hour indirect calorimetry for fermentation. Breath hydrogen was determined three hours after 20ml lactulose intake. There was no significant difference between the median symptom score (8 vs 8.5), median maximum rates of gas production (0.92 ml/min vs 0.55ml/min) and the median hydrogen production (208.2 ml/24 hr vs 189.7 ml/24hr) in L. bacillus group compared to the placebo group.23

The largest RCT in this regard was done by Stevenson C et al in Cape Town, South Africa, which included 81 patients. These patients were treated with either L. plantarum 299v at a dosage of 5x109 CFU per capsule for 12 weeks or placebo.24 No significant difference in abdominal pain relief was observed between the groups. Similarly, no significant difference in quality of life scores between the groups were observed.25 However, significant improvement in abdominal pain scores during the study was observed with an average of 251.55 to 197.90 (p<0.0001), indicating a large placebo effect. The subjects responded well to both probiotic therapy and placebo, which was also the case in the current study.

There was no significant improvement in the IBS symptoms among these treated with L. plantarum compared to those on placebo.

15.     Quigley EMM, Flourie B. Probiotics and irritable bowel syndrome: A rationale for their use and an assessment of the evidence to date. Neurogastroenterol Motil. 2007; 19:166-72.