Intraventricular tumours are relatively uncommon among all brain tumours, and non-enhancing lesions, mostly subependymoma, are even less frequently reported. Select cases of subependymoma can show variable contrast enhancement as well. Gross total surgical resection is recommended for treating these lesions, with no significant role of adjuvant chemotherapy or radiotherapy.

Intraventricular tumours (IVT) account for only 2-7% of intracranial tumours. They usually arise from periventricular structures such as walls of the ventricular system, septum pellucidum, or the choroid plexus. The most common location for IVT are the lateral ventricles, with up to 50% IVT located there.1 Correct diagnosis of an IVT poses a challenge due to the overlapping symptoms and wide variety of radiological features that may not be truly pathognomonic. However, both CT and MRI findings, in combination with location and patients' age, can help limit differentials. IVT can be classified depending on their enhancement, and sub-ependymoma (SE) is the only non-enhancing IVT.

SE is a mixture of ependymal and astrocytic cell types, and is mostly a noninvasive, slow-growing, benign tumour. These tumours usually present in the fourth and sixth decade of life, and have a strong male predilection (male to female ratio 2.3:1). They account for 0.2% - 0.7% of IVTs; most of these lesions are found in fourth (50%-60%) and lateral ventricles (30%-40%).2 WHO classifies SE as grade I neoplasms because these are sharply demarcated, lobulated, intraventricular masses, arising from the margins of lateral ventricles or attached to septum pellucidum.3 Due to their benign nature, 60% of the patients are asymptomatic and the tumour size is usually less than 2 centimeters. However, symptomatic SE is usually greater than 3-5cm in widest diameter, and often obstructs the cerebrospinal fluid flow.2 Up to 80% of the symptomatic patients present with signs and symptoms of hydrocephalus (headache, nausea/vomiting, blurred vision). Surgical removal of symptomatic lesions is the treatment of choice, radiotherapy is only considered for residual or recurrent tumours.4

We reviewed the relevant literature on Google Scholar and PubMed, and found that most case studies were case reports or relatively small case series, and the largest cohort comprised of 83 patients only.4 In one of the earliest retrospective case reviews, Ragel et al., reviewed clinical, histological, and contemporary radiographic presentations of 16 patients with intraventricular SE.1 They reported that these tumours were hypo- to iso-intense on T1, and hyper-intense on T2, and usually showed no contrast enhancement.1 On CT scan, most SE appeared as well-defined, iso- or hypodense masses, with frequent internal cystic components, and occasional subtle contrast enhancement.1 Calcifications were not commonly seen.1 According to the study, the most important factor affecting presenting symptoms of patients was its location, and the most common initial complaints included headache, seizures, tingling sensation, and weakness.1 Size of tumour at presentation was directly related to tumour location, with tumours that block CSF pathways (fourth ventricle and foramen of Monro) presenting with smaller dimensions as compared to tumours not impeding CSF flow (atrium of the lateral ventricle).1 In this study, eight patients underwent gross total resections which were verified by postoperative imaging.1 The diagnosis was made by histopathological examination, and no adjuvant therapies were administered.1 Patients were followed with MRI for an average of 15.3 months, and no tumour recurrence was noted.1 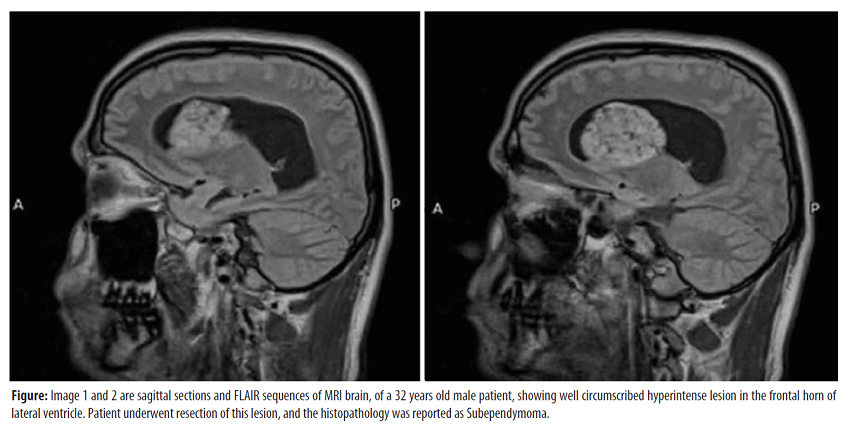 On post-contrast scans, majority patients with enhancement had mild enhancement (36%).4 Patients who had undergone gross total resection of the tumour, were cured of the disease, and only 4 patients with incomplete resection had disease progression.4 They concluded that surgical resection is the mainstay of treatment, and age less than 50 years at time of surgery is the only factor significantly affecting survival.4 In another study, Hou et al. retrospectively studied 27 cases of SE located in lateral ventricles.5 The most common location within the ventricles was foramen of Monro, and 85% patients had symptomatic hydrocephalus.5 CT scans of 7 patients showed well-defined nodular masses with cystic changes, no calcifications, and minimal contrast enhancement in only one case.5 Twenty one patients had got an MRI done; lesions were mostly hypointense on T1-weighted images, hyperintense on T2-weighted images, and only 2 (7.4%) scans showed contrast enhancement.5 Craniotomy was done for all cases, and intraoperatively these tumours appeared hypo-vascular, greyish white, smooth-surfaced rubbery masses.5 Gross total resection was performed in 23 (85%) cases and subtotal resection in the remaining 4 (15%) cases. A mean follow-up of 55.5 months showed no tumour recurrence, and no adjuvant therapy was given.5

Im et al., studied 7 cases of intraventricular SE and they concluded that headache is the most common initial presenting symptom, whereas altered mentality associated with obstructive hydrocephalus was the most urgent symptom that made patients visit the emergency room.6 CT scans of these 7 patients showed an intraventricular lobulated mass with cystic changes. No enhancement was seen in 3 tumours in the frontal horn, in which CT scans displayed a non-calcified, hypo, or iso-dense mass around the foramen of Monro. Moderate to marked enhancement was seen in two tumours of the trigone and one tumour of the frontal horn. On MRI, 7 patients showed a heterogeneous mass with low to high signal intensity on T1-weighted images and high signal intensity on T2-weighted images. Three tumours were markedly enhanced on Gadolinium-diethylenetriaminepentaacetic acid (Gd-DTPA) T1-weighted MR imaging. They performed gross total resection of the tumour in five patients whereas subtotal resection was performed in the remaining 2 patients. Patients who underwent gross total resection became symptoms free, and no evidence of recurrence was found till the last follow-up (18 to 100 months). In patients who underwent subtotal resection, residual tumour regrowth was seen after 2 years.6

In a 10-year retrospective review of intraventricular tumours at a single center, Aftahy et al., reported 45 cases, of which 21 (46.7%) were subependymoma.7 They achieved gross total resection in all their cases, and supported maximal surgical resection, as adjuvant treatment has no significant effect on these tumours.7 Kweh et al., in a recently published systematic review and meta-analysis, reported 24 studies including 809 patients.8 The commonest location was lateral ventricles (44.5%), followed by fourth ventricle (43.1%).8 They found a cumulative morbidity and mortality after surgery to be 24.3% and 3.4%, respectively.8 At a median follow-up of 15.3 to 120 months, recurrence rate was 1.3%, while the 5-year survival rate was 89.2%.8 It was concluded that extent of surgical resection was best associated with outcomes.8

The available evidence suggests that non-enhancing intraventricular lesions, are mostly subependymoma, although they can have variable amount of contrast enhancement in select cases. Surgical resection is the mainstay of treatment of these lesions, and recurrence after complete resection is rare.