Arteriovenous malformation of head and neck: A case report

Extra-cranial arteriovenous malformations of head and neck are rare and may present with acute haemorrhage. Their management varies and requires a multidisciplinary approach. Intra-arterial embolisation alone or followed by surgery is recommended. We present here a case of a huge pulsatile lesion extending from the neck to the temporo-parietal region with the main feeding vessel being the right external carotid artery. It was treated with surgical resection only as the feeding artery was very tortuous making selective embolization of artery impossible. The excision of the portion of the artery in the neck was carried out a week later. The patient recovered smoothly except for transient facial nerve palsy.

Arteriovenous Malformations (AVM) are congenital lesions composed of a complex tangle of arteries and veins connected by one or more fistulae.1 Vascular conglomerate is called the nidus. The nidus has no capillary bed, and the feeding arteries drain directly in the draining veins.1 The draining veins often are dilated owing to the high velocity of blood flow through the fistulae. The arterial blood, having higher blood pressure than venous blood, flow readily in the low resistance vessels (arterialization of veins).2 The mechanism by which the abnormal vessels start appearing is unknown.3 Deranged production of vasoactive proteins is under investigation as it leads to the angiogenic link to pathophysiology.4 We report an interesting case of arteriovenous malformation in head and neck region, managed by surgical excision. The case is being reported after getting written informed consent from the patient for publication and getting approval from institutional review board and ethical committee.

A 60 years old female presented to the emergency room (ER) with the complaint of bleeding from a lump at the right side of her neck. The lump had been there for the last 25 years and had gradually increased in size. There were no other associated symptoms when she was brought to ER with profuse bleeding from the portion of lump present in the region of the head. The patient was conscious and vitally stable with a blood pressure of 140/90 mm Hg. The neurological examination was unremarkable. There was a huge pulsatile swelling involving the whole of the right side of the neck up till the temporo-parietal region (Figure-1). 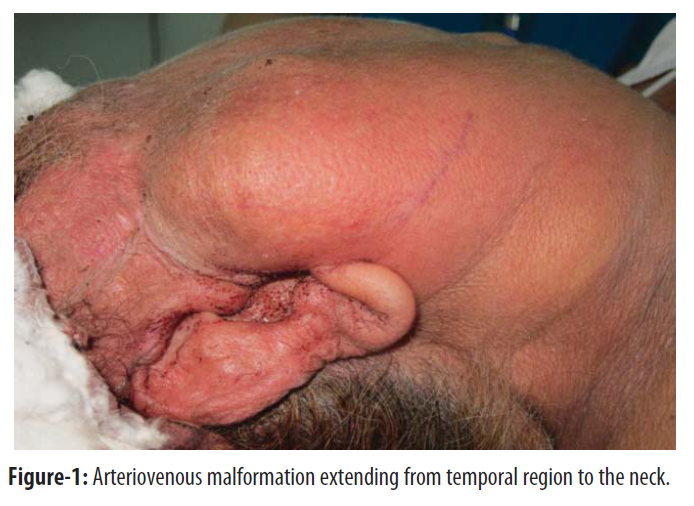 CBC showed anaemia secondary to blood loss, while all other parameters were normal. The ECG and chest X-Ray were normal. CT angiogram of head and neck revealed a large arteriovenous malformation composed of both arteries and veins extending from the region of the neck to the ipsilateral temporo-parietal region of scalp (Figure-2). 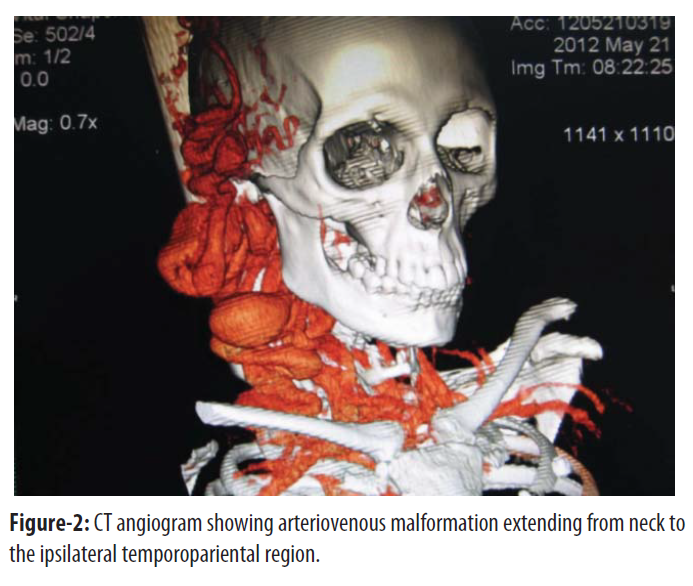 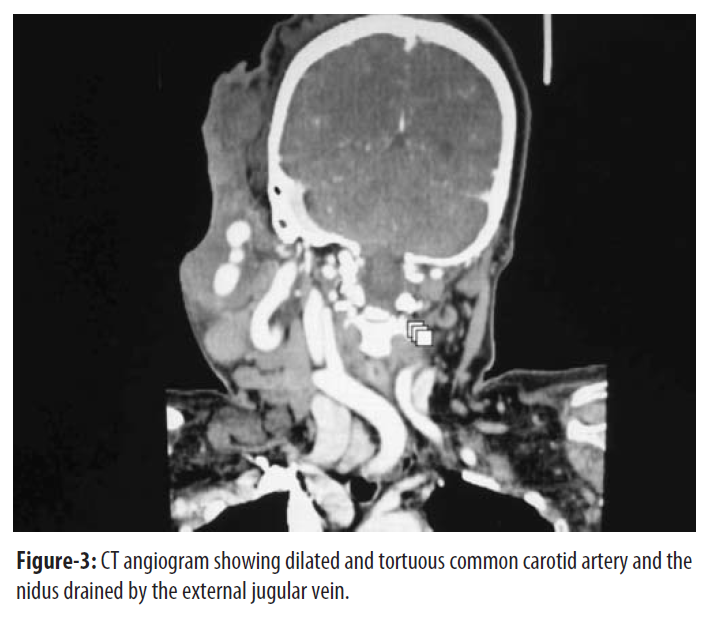 Surgery was planned to get hold of the main feeding vessels, i.e. the external carotid artery and the external jugular vein in this case, followed by excision of the whole malformation. The common and external carotid arteries were exposed through an incision along the anterior border of the sternocleidomastoid muscle. They were found to be hugely dilated and tortuous. Only the cervical part of the malformation which was composed of grossly dilated veins was resected in this procedure due to prolonged surgery and preoperative blood loss. A digital subtraction arteriography (DSA) was done. This showed that the portion of the malformation in the scalp received vessels from the parietal region of the other side and also from the ipsilateral temporal region. The resection of this temporoparietal portion was carried out a week later. The post-operative recovery of the patient was unremarkable except for transient weakness of the facial nerve which was found to be improving in the follow up visits. Postoperatively the patient was followed up for 6 months and no recurrence or complication was noted.

This was a fast flow arteriovenous malformation as per classification of international society for the study of vascular anomalies (ISSVA).4 A gradually enlarging, compressible mass with a potential to bleed is the usual presentation, where deep venous drainage and relatively high arterial feeding pressures make subsequent haemorrhage more likely.3 They may be present in the soft tissues or within viscera.3,4 Almost always present since birth, arteriovenous malformation may become clinically more evident during puberty, pregnancy or after minor trauma and bleeding may make surgical extirpation necessary.5,6

Other modes of presentation may include ischaemia distal to malformation (Steal syndrome), pressure effects to adjacent nerves and compression of viscera as. in intracranial lesions and ulceration of overlying skin.7 Extracranial AVMs of head and neck being rare, are best imaged by Digital subtraction angiography but CT angiography also gives adequate information.8 DSA has the added advantage of therapeutic embolisation of the artery.6,7,9

Tabuchi S. has reported a case of a small AVM of scalp in fronto-parietal region in a 75 year old man.8 It presented with profuse bleeding. The feeding vessel was found to be superficial temporal artery and it was successfully treated with surgery alone.8 Cedro and Villarosa have reported a case of a 37 year old female with AVM of face and scalp who presented with epistaxis and bleeding from the eye.10 She was managed with super selective arterial embolisation with polyvinyl alcohol and gel foam, followed by curative resection a week later. Le et al concluded in their retrospective trial that embolosclerotherapy is recommended for treatment of arteriovenous malformation despite the soft tissue injuries which occurred in 29.4% of the cases.9 In the lesions where nidus was approachable for percutaneous sclerotherapy, a success rate of 50% was reported, while the rest were dealt with arterial embolization and resection.

Thus, the management of extra cranial arteriovenous malformation of head and neck carries a considerable amount of controversy owing to the rarity and variability of the condition. As vascular surgeons, it is important to share every such case so that data can be pooled and meaningful conclusions can be drawn in the long run. The current data as reviewed by Soluez suggests a multidisciplinary approach.7 Liquid embolization with Onyx and surgical excision is the mainstay of treatment.7 The perivascular inflammation and risk of haemorrhage associated with embolization should be kept in mind and also that in case of extensive lesions, curative resection is not always possible and debulking alone can reduce the potential to bleed.

We have reported a rare case of bleeding AVM head and neck region in a 60-year-old female. The case report emphasizes the role of primary, staged surgical excision and ligation of feeding vessels in bleeding arteriovenous malformations, which was done successfully in our case.

Challenges in the management of pregnancy complicated by maternal Diamond Blackfan Anaemia: A case report