Blue rubber bleb nevus syndrome (BRBNS) is a rare disorder in which there is development of multiple venous malformations and haemangiomas in the skin and visceral organs. The lesions mostly involve the skin and gastrointestinal systems but other organs, including the liver, muscles, and the central nervous system, can also be involved. If untreated, affected individuals develop severe anaemia. Most cases are managed with iron supplementation and blood transfusions but some may require surgical resection, endoscopic sclerosis and laser photocoagulation. Here, we present a case of BRBNS in a four-year-old girl with multiple cutaneous lesions, melena and severe anaemia. Review of South Asian literature showed that only two cases (besides ours) have been reported from Pakistan and the rest were from India. This highlights the lack of awareness of BRBNS among physicians in Pakistan and the rest of South Asian countries.

Blue rubber bleb nevus syndrome (BRBNS) [OMIM % 112200] is a rare condition with an estimated prevalence of 1 in 14,000 births.1 Around 250 cases have been reported in the literature till date. It was first recognised by Gascoyen in the year 1860, and William Bennett Bean later described it in detail, naming it "Blue rubber bleb nevus syndrome or Bean's syndrome". It is characterised by numerous venous malformations in the skin and viscera, particularly in the gastrointestinal tract.1 Other organs such as liver, spleen, kidneys, bladder, lungs, and brain may also be rarely involved.

The exact aetiology of this syndrome is unknown, but on molecular level, elevated expression of c-kit (locus on chromosome 9P), has been demonstrated.2 Soblet et al has recently identified ligand-independent activation of TIE2 (secondary to somatic mutations in TEK gene) in many BRBNS patients.3

We are reporting a case of BRBNS in a four-year-old girl who presented with multiple cutaneous lesions, melena, and severe anaemia. Additionally, we reviewed literature on the published cases of BRBNS from South Asia using MEDLINE, Pubmed, Google Scholar and Research Gates and compared the age of onset of symptoms, age at diagnosis, signs and symptoms, and the predominant system involvement in the reported patients.

This four-year old girl was admitted at the Aga Khan Hospital, Karachi in June 2019 with multiple blue cutaneous lesions over different parts of her body and passage of black coloured stool. These lesions were not present at birth and they had developed gradually over the last two years. They were present on her face, conjunctiva, arms, legs, abdomen, palms, and soles and were tender to touch. Her parents did not report any history of melena prior to this hospitalisation. However, the parents had consulted physicians for increasing cutaneous lesions over her body in their home town at a territory care hospital and were advised some topical applications. The patient had never required a packed cell transfusion. Her birth and past history were unremarkable and there was no family history of BRBNS. Developmentally, she had achieved age-appropriate milestones and had normal speech, vision, and hearing.

On physical examination, she had marked pallor and tachycardia. Blue coloured rubbery nodules were present on different parts of her body, including palms and soles (Figure-1a & 1b). These lesions were of variable sizes, ranging from 0.5 to 3cm. Systemic examination was unremarkable.

A diagnosis of blue rubber bleb nevus syndrome was established on the basis of history, presence of characteristic cutaneous lesions and the pathognomic gastrointestinal lesions as observed on endoscopy. Her haemoglobin level improved after blood transfusion and no active bleeding was observed during the hospital stay. Iron and folic acid supplementation was started along with proton pump inhibitors and H2 blockers. She was discharged in a stable condition and was called for follow-up. Lower GI endoscopy and ophthalmological examination were also planned on follow-up. Written consent was taken from the patient's father for publication of the report.

BRBNS is characterised by multiple venous malformations in the skin and internal organs, predominantly in the gastrointestinal tract. It may affect other organs such as the brain, eyes, lung, liver, spleen, kidneys, bladder, and joints. 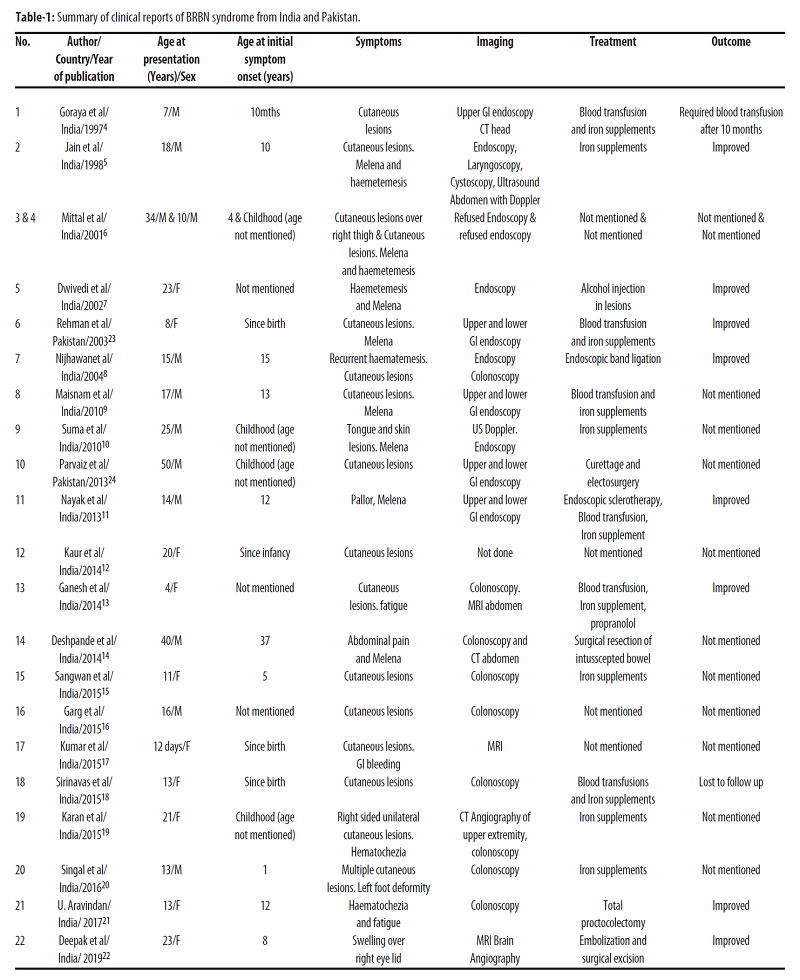 Demographics, age of symptoms onset, clinical presentation, mode of imaging used, treatment given and outcomes were listed. Twenty BRBNS cases were reported from India4-22 and two from Pakistan.23,24 No BRBNS patients were reported from Afghanistan, Bangladesh, Bhutan, Maldives or Nepal. Lack of recognition of this rare condition in Pakistan could be a possible explanation of only two reported cases. Among the 22 cases identified, 12 were males and 10 were females, with male to female ratio of 1.2:1. Lesions most often presented from infancy or childhood. The onset was traced in 19 of the patients reviewed. Among them three had symptoms at birth, three developed during infancy, 12 during childhood and one had symptom onset in adulthood. The diagnosis was established at (12th day of life, 8 years and 13 years) in those who had initial symptom onset at birth, at (7 years, 13 years and 20 years) in patients with onset of symptoms during infancy, and at median age of 17.5 years (IQR 11) in patients with symptom onset during childhood. This highlights the fact that late diagnosis was most likely due to lack of awareness to recognise BRBNS among healthcare providers. There was only one patient in whom diagnosis was made at the time of symptom onset. The oldest patient reported was 50 years old and the youngest was 12 days old. Our patient was diagnosed after two years of symptoms onset. Diagnosis of BRBNS has been reported in an 80-year-old woman from Portugal, which shows that delayed diagnosis is not only observed in South Asia.25

Symptoms of BRBNS depend on the site and organ of involvement. Majority of the cases present with cutaneous blebs, GI haemorrhage or anaemia. Cutaneous lesions are characteristically bluish in colour, nodular, rubbery, and compressible. They vary in size and number, ranging from a few to hundreds of such lesions, but are usually asymptomatic. Cutaneous lesions were the most common symptoms as reported in 10 (45%) patients, followed by a combination of cutaneous lesions and GI symptoms present in 7 (32%) and only GI involvement in 5 (23%) patients. Our patient had both cutaneous and GI involvement. She was also severely anaemic due to recurrent GI bleeding.

Cutaneous blebs do not require any treatment unless indicated for cosmetic reasons. Treatment options for cutaneous lesions include surgical excision, curettage, liquid nitrogen or carbon dioxide laser. But complications like hypertrophic scar formation and recurrence may be seen.26 Among the patients reviewed only one had an excision done as the lesion involved the right eyelid and was causing vision disturbance. Our patient had 15 cutaneous blebs involving her face, conjunctiva, arms, legs, abdomen, palms, and soles. No treatment was offered for these skin lesions as they were asymptomatic.

GI blebs present with melena, or they may be complicated by intussusception, volvulus, perforation, infarction and abdominal pain. Such lesions can occur anywhere in the GI tract but small intestine is the most commonly involved site. GI tract should be screened by endoscopy in suspected cases of BRBNS. Therapeutic interventions such as argon plasma coagulation, band ligation, and sclerotherapy can be performed with diagnostic endoscopy. Surgical excision of GI lesions was done in three of the patients reviewed; of these, two had sclerotherapy ablation and one had an endoscopic band ligation. Ablation using argon plasma was used in our patient. Minor GI bleeding can be managed conservatively with iron and folic acid supplementation and blood transfusions when needed. However, lesions that cause recurrent and/or massive bleeding may require surgical resection of the affected GI segment.27 Before the surgical resection, the entire GI tract should be thoroughly evaluated and the extent of involvement should be determined. Staged surgical procedures should be planned for patients with extensive GI involvement. Five of the patients reviewed were managed with blood transfusion along with iron supplements while five were managed with iron supplements alone.

Other extracutaneous manifestations of BRBNS include CNS involvement causing headache, seizures, weakness, and spinal cord compression.28 Haemangiomas involving the bronchial tree cause chronic cough.29 Epistaxis has been reported with nasal cutaneous lesions.30 Investigations should target the system involved with other systems like CNS screen depending on the index of suspicion. In our literature review a total of 55% patients had GI involvement, therefore, we propose upper and lower GI endoscopy.

Autosomal dominant mode of inheritance has been described for the BRBNS.31 None of the cases reviewed, including our case, had any familial history nor did any of the reported patients, including our patient, had TEK gene testing done. Individuals with BRBNS carrying the somatic TEK mutations will have a 50% chance of transmitting the disorder to each of their offspring.

Blue rubber bleb nevus syndrome does not have a curative treatment, but most patients with this syndrome have a good outcome, although their quality of life may be affected by the disfiguring cutaneous lesions and recurrent GI bleeding requiring blood transfusions. Outcomes were not mentioned in 12 of the cases reviewed, 8 cases showed improvement and a single case required blood transfusion on follow-up. Recently, the role of an anti-angiogenic factor, Sirolimus, has been described as a safe and effective therapy for BRBNS by Yuksekkaya et al, who demonstrated reduction in the size of lesions and decreased blood transfusions after the use of low dose Sirolimus.32 Clinical efficacy and safety of oral Sirolimus has been shown in children.33-35

Blue rubber bleb nevus syndrome is a rare disorder characterised by cutaneous and GI haemangiomatosis. There is a dearth of published cases from Pakistan, highlighting the lack of recognition of this easily diagnosed disorder. Timely recognition of the constellation of signs and symptoms consistent with the diagnosis of BRBN syndrome in our patient lead to proper supportive treatment and a proper surveillance will prevent otherwise life-threatening consequences.

Disclaimer: None to disclose.

Challenges in the management of pregnancy complicated by maternal Diamond Blackfan Anaemia: A case report

Arteriovenous malformation of head and neck: A case report