Calcaneal osteomyelitis (OM) is a challenging disease. Traditional surgical management has a limited success in preservation of the foot. The surgery proposed with the use of the Ilizarov apparatus for calcaneal OM aims to preserve the function, shape, and stability of the foot.

Five patients between the age of 21 and 36 years, with isolated total and subtotal calcaneal OM, were treated with this technique in Royal Jordanian Medical Services (RJMS) institutions. Complex treatment included two stages: 1) radical sequestrectomy, and fixation of the foot in a favourable position with the Ilizarov fixator; 2) arthrodesis, reconstruction of the foot in order to fill in the bone defect. The patients were followed-up in the immediate (one month) and long-term (from one to six years) periods after treatment. The infection process was arrested and no recurrence was encountered. Weight-bearing ability was recovered. The shape of the hind foot was maximally close to natural. The patients reported high satisfaction.

Despite the introduction of new surgical techniques and modern antibacterial drugs, chronic osteomyelitis (OM) of the calcaneus remains a challenging condition. It represents 7% of the OM that develops in other bones of the body and 5l% of OM in the foot.1,2 It requires multiple surgical debridements. The available reconstructive operations result in poor outcomes and high recurrence rate.3

We propose a method for reconstruction of the hind foot after the removal of the infected calcaneal bone in order to restore its anatomical shape and limb function in a relatively short period of time.

Five patients were treated for calcaneal osteomyelitis with this technique between 2013 and 2017 at the Royal Jordanian Medical Services Institutions (Table-1) All the patients were followed-up on a regular basis every four to six weeks after the initial procedure, and were evaluated clinically and radiologically on each visit until they reached the final required result and all osteotomies were healed. The average time between regular follow-up and different procedures until reaching final result was 256 days Table-1. All the patients signed the informed consent on their first admission after being explained the different stages of surgery, the period of follow-up and possible complications. The study was approved by the local Ethical committee of the Royal Medical Services. All patients were evaluated according to Ankle-Hindfoot scale (100 points in total) preoperatively and postoperatively, this scale takes pain, function and alignment in consideration.

The patients' ages were from 21 to 36 years. The duration of the disease was from two 2 to 12 years. Osteomyelitis was secondary to spina bifida in three patients, spinal surgery in one patient and after glomus tumour removal in the pelvis in one patient. All the patients had plantar deep ulcers of different sizes with purulent discharge. Culture studies are shown in Table-1. Duplex ultrasonography revealed peripheral vascularity. Sensation was slightly decreased on the affected foot surface.

Stage 1: Debridement of the purulent lesion was done (Figure-1 a). Dye solution was introduced into the sinuses, the whole sinus was excised along its tract using the lateral approach, and non-viable surrounding soft tissues were removed. The affected calcaneal bone was separated gently and removed (Figure-1 b). The wound was washed properly.

After that, the Ilizarov apparatus was applied on the leg and foot in the following sequence: Two wires were drilled at upper and middle third of the Tibia, crossing inside the bone. Two wires were inserted in the forefoot. Wires were tensioned and fixed on the rings in the tibia and in a half ring in the foot. The external supports were connected with rods (Figure-1 b). One-month interval was given for wound healing. 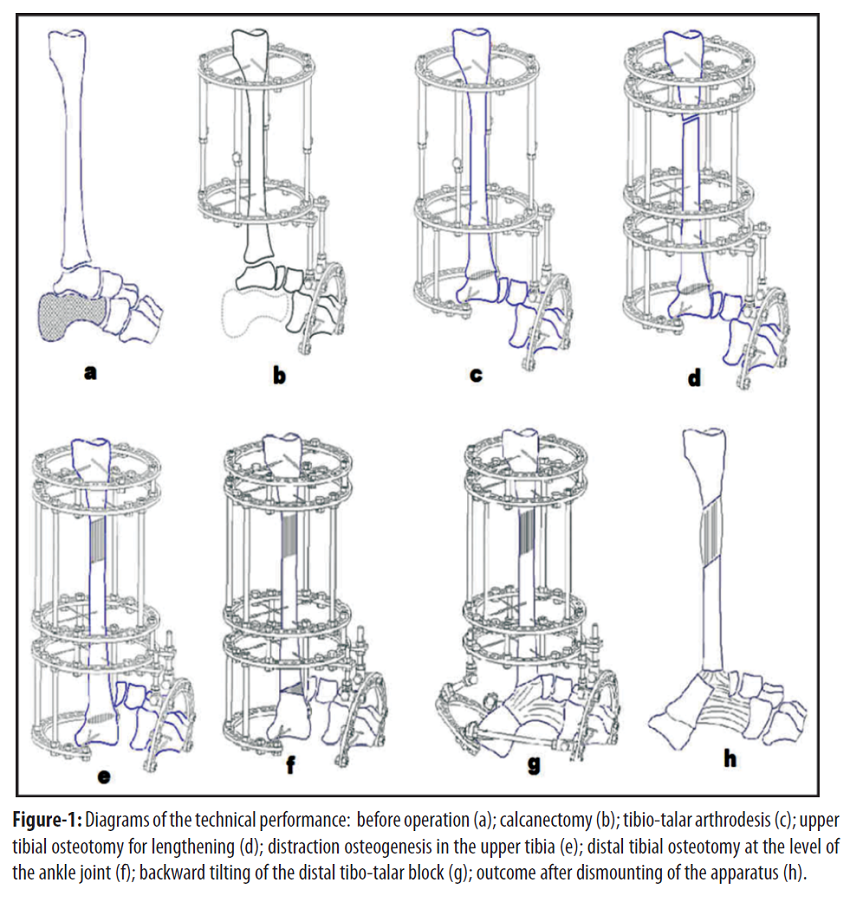 Stage 2: After one month, arthrodesis of the ankle and talo-navicular joints was performed and the cartilage of the above mentioned joints were removed. The body of the talus was approximated to the tibial end while the head of the talus to the navicular bone. Circular frame was applied. Two more crossed wires were inserted into the talus and attached to a half ring through rods as shown in Figure-1c.

Postoperatively, a supportive compression by 1mm every 10 days was maintained between the segments to obtain a radiographic bony union, which usually takes from 30- 40 days. Next, osteotomies in the proximal tibial metaphysis and at the talar neck were performed. To improve the stability of the tibial fragments, two or three extra wires were inserted, attached to two more rings (Figure-1 d).

Tibia was lengthened by gradual distraction in the upper third of the tibia, while the body of the talus was lowered thereby into the region of the removed calcaneus (Figure-1 e). The amount of tibial lengthening should be equal to the height of the calcaneus previously removed. After bringing down the distal end of the tibia, the hindfoot shape was modelled by doing a tibial osteotomy at the lower tibial third, at the level of the fused ankle joint in the horizontal plane so that the distal fragment of the tibia and the talus correlate to the size of the removed calcaneum (Figure-1 f).

Postoperatively, a gradual backward tilting transport of the distal fragment tibio-talar block was performed to shape the arch of the foot (Figure-1 g). For which, the rods between the distal tibial ring and the talar half-ring were changed to hinged connections while the forefoot ring and the talar ring were connected with two threaded rods.

Once a proper anatomical shape and size of the hindfoot has been achieved, the forefoot and middle foot should be compressed towards the site of the distal tibial osteotomy (once every 20 days). Fixation in the frame was continued until bone union to create a bony block which is resistant to static and dynamic loads and is free of OM lesions (Figure-1 h). On removing the apparatus physical exercises are necessary to train a new stereotype of gait.

All the five patients regained weight bearing and showed improvement according to Ankle-Hindfoot Scale. Infection was arrested. No recurrence was observed. The hindfoot shape was maximally close to natural. The patients reported high satisfaction.

Clinical example: A 26-year-old male patient was diagnosed with chronic total osteomyelitis of the left calcaneus on presenting to the clinic in Nov 3, 2014 RJMS institutions. He had a sinus and a trophic ulcer that measured 6 cm2 (Figure-2 a-c). The patient underwent staged surgeries as mentioned above (Figure-2 g-h, Figure-3 a-e f, g, h, I and Figure-4 a, b, c, d, e, f). 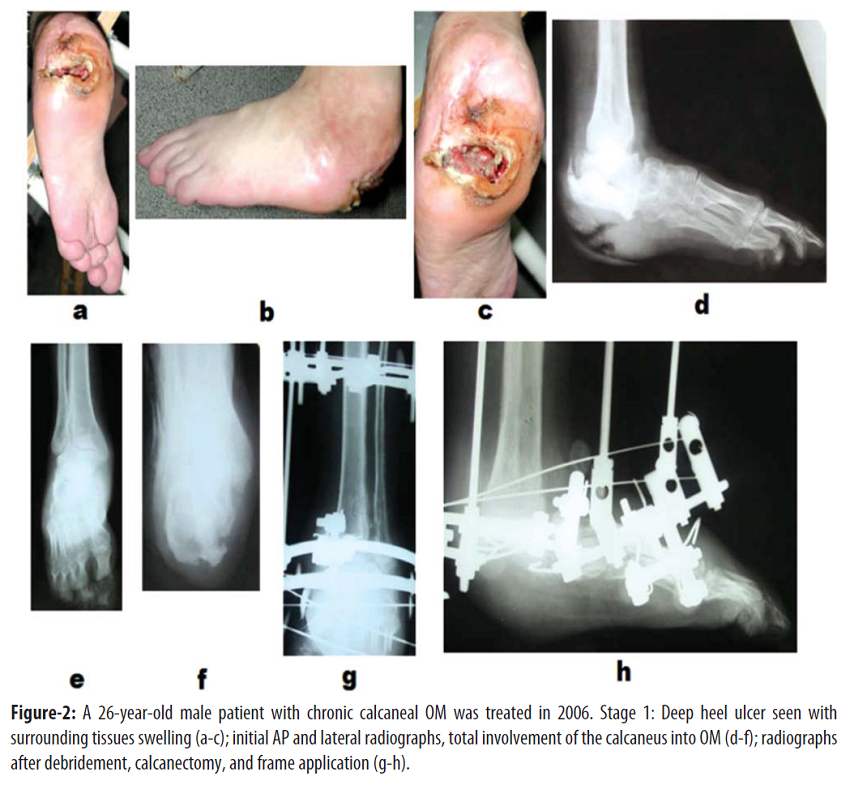 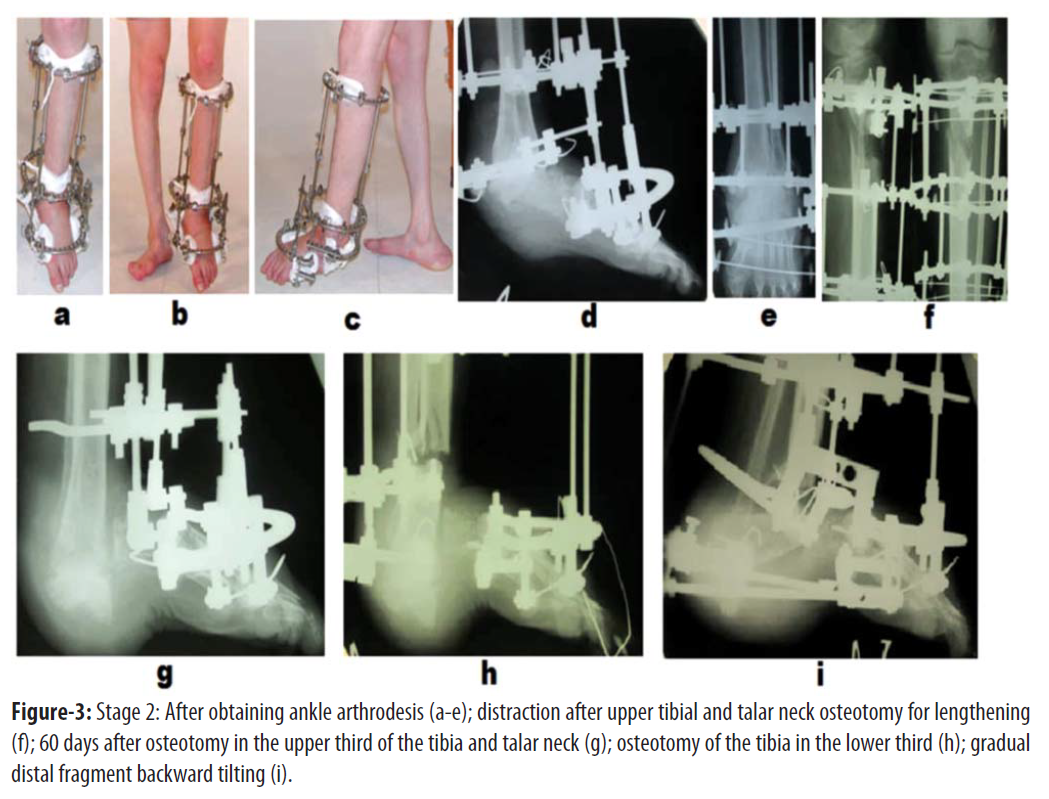 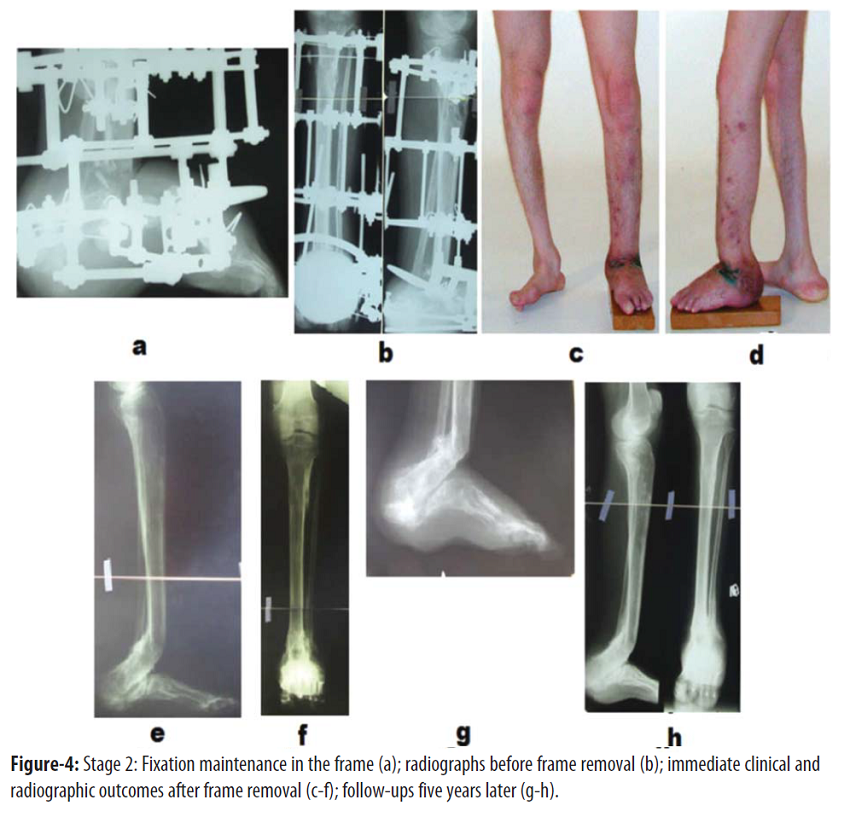 Total duration of the treatment was 283 days and follow-up period was five years. It resulted in full weight bearing, no recurrence and he had no complaints. The foot shape was close to normal (Figure-4 g, h).

Currently, a few surgical techniques have been used to fill in bone and soft tissue defects in the foot such as filling defects with various materials (bone cement mixed with various antibiotics, hydroxyapatite, calcium sulphate);3 or with different types of muscles, skin flaps and bone grafts.3-5 All these methods mandate a stable limb fixation. Various types of splints are used for this purpose which does not provide adequate stability and weight-bearing ability.6 High recurrence rates of the infection process were reported.7

Russian literature describes a process of calcaneal replacement through distraction for a total defect using the Ilizarov frame by T-shaped osteotomy of the talus followed by Gradual transport downwards and backwards to restore the contours of the hindfoot. This technique was used in patients without purulent infection.7

Several other techniques with the use of external fixation were reported but the fixation was limited to the affected segment, without reconstructive procedures.3

The proposed technique is based on the Ilizarov method that is able to produce a rigid limb fixation following debridement and filling bone defect. Its outcome is restoration of the function and bone volume of the foot. Early weight-bearing during treatment is an advantage. Internal fixation means such as plates and screws are not used. The disadvantage of our technique is a relatively long period of treatment. Patient's compliance and cooperation as well as surgeon's experience are significant issues.

Total and subtotal calcaneal defects as a consequence of chronic OM is a challenging condition for both an orthopaedic surgeon and a plastic surgeon. It is feasible to use Ilizarov distraction osteogenesis and trans-osseous osteosynthesis to fill in the bone and soft tissue defects for treatment of calcaneal OM.

Conflict of Interest: No conflict of interest for publication of manuscript.

Funding Sources: Nothing to disclose.

Clinical parameters and treatment outcome in patients of acromegaly: A retrospective analysis of 51 patients