The effect of nurses’ occupational safety perceptions on job satisfaction: A research study conducted in Turkey

Objective: To evaluate the effect of nurses' occupational safety perceptions on the level of job satisfaction.

Method: The cross-sectional study was conducted at Acibadem Healthcare Group hospitals in Turkey from January 15 to February 15, 2018, and comprised of professional nurses. Data was collected using the Job Satisfaction Scale and the Occupational Health and Safety Culture Scale. Data was analysed using SPSS 21.

Conclusion: High perceptions of occupational safety among the nurses led to greater job satisfaction within the organisation. Also, working conditions had a direct impact on both extrinsic and general job satisfaction.

Job satisfaction as a concept encapsulates "the feelings and positive or negative thoughts that employees have towards their work", while satisfaction generally refers to the achievement of a sense of contentment following the accomplishment of a goal.1 As a concept, job satisfaction was first introduced in academic literature in the 1920s and gained prominence starting from the 1930s. To date, the effects of job satisfaction have been extensively studied in a variety of disciplines, including psychology, sociology, management and nursing.2

Intrinsic satisfaction includes factors that are related to the intrinsic features of the job, such as success, recognition or appreciation, the work itself, work responsibility and opportunities for advancement and promotion. Extrinsic satisfaction consists of elements related to the working environment, such as company policies and management, supervision, managers, relations with co-workers and subordinates, working conditions and wages.3

The prevalent definitions of job satisfaction in the nursing profession are often based on Maslow's Hierarchy of Needs and Herzberg's Two-Factor Theory.2 While there are several definitions of nurses' job satisfaction coined by multiple authors, Atwood and Hinshaw defined the concept as "a nurse's perception of subjective feelings about his or her job and working condition".2 What is significant for the purposes of the current context is that these definitions do not integrate the nurses' 'perceptions' of job value and other related factors into the assessment of job satisfaction level.2

Factors that may have a negative impact on nurses' job satisfaction include difficult working conditions, excessive sources of work stress, low wages corresponding to the nature of the work done, long and irregular working hours, intensive workload, and abundance of workplace risks, including injury, violence, chemical and biological risk factors.5,10

It has been observed that occupational injuries remain a concern for many organisations due to both human and economic costs.11 In the healthcare sector, the frequency of health professionals encountering occupational risks varies according to job title, department as well as specific tasks undertaken. For example, the staff working at radiology or nuclear medicine departments may be at the risk of radiation exposure, while the sterilisation unit staff may be at the risk of mercury and glutaraldehyde exposure. Similarly, the staff of the operating room (OR) may be adversely affected by toxic gases.12 In the case of nurses, they are more likely to be exposed directly to health risks due to delivering patient-care in person. They are also exposed to biological, chemical and physical hazards, including sharps injuries, exposure to blood and body fluids, and musculoskeletal injuries.13

Consequently, the relationship between occupational safety and job satisfaction demands a closer study, given it is previously concluded that lower job satisfaction of nurses may lead to lower quality care and patient satisfaction in certain cases.2 It is also known that a low safety climate at workplace may augment the stress levels of employees, which may then have negative impact on job satisfaction.11 A duty should be placed upon healthcare organisations to continuously review and ensure the safety and health of those who receive and provide health services, and intervene by making improvements where necessary.14

The study of the dynamics within an organisation, including the parameters of efficiency, productivity and continuity — comprehensive indicators in the formation of desirable workplace conditions — also demands the evaluation of factors that affect the level of job satisfaction of the workforce.

The cross-sectional, correlational study was conducted at one of the Acibadem Healthcare Group (AHG) hospitals in Turkey from January 15 to February 15, 2018, following the Strengthening the Reporting of Observational studies in Epidemiology (STROBE) criteria.15 As a result of the Pearson correlation test, a statistically significant, weak positive linear relationship was found between job satisfaction and occupational safety perception (r = 0.20; p < 0.05).16 Therefore, a priori power analysis was conducted G*Power software17 to estimate the sample size with power (1-b) 0.90 and significance (a) 0.05.  In the calculation of the sample size, a 5% margin of error at a confidence level of 0.95 of 410 nurses was found to correspond to 199 nurses. By applying a 10% waste share to the obtained account it was found appropriate to carry out the study with 220 people. This number was exceeded as the study was carried out with 275 nurses.

The sample size was inflated by 10-15% to cover up for possible dropouts. The sample size suggested that the study covered 67% of the entire population.

Approval was obtained from the institutional ethics review committee, and data was collected after taking informed consent from all the subjects. The study used a convenience sampling technique. Those nurses who were employed at one of the Acibadem Health Group Hospitals, with work experience of at least one year and who volunteered to participate in the study were included. Those nurses who were on leave at the time of the study were excluded.

Data was collected using a personal information form (PIF), the Job Satisfaction Scale (JSS) and The Occupational Health and Safety Culture Scale (OHSCS). The PIF consisted of 10 questions about the socio-demographic characteristics of the participants.18

The JSS was adjusted from the Short Form-Minnesota Satisfaction Questionnaire (MSQ), which is 20-item tool exploring intrinsic and extrinsic job satisfaction factors. It is scored on a 5-point Likert-type scale ranging from 1 = very dissatisfied to 5 = very satisfied.19

The 35-item OHSCS is divided into 8 sub-dimensions: Infection Prevention' with 6 items, Management Policies with 7 items, Health Screenings with 6 items, Chemical Safety with 4 items, Safety Training with 5 items, Violence Prevention with 3 items, Food Safety with 2 items, and Fall Prevention with 2 items. The 5-point response ranges from 1 = strongly disagree to 5 = strongly agree. In an earlier study done in Turkey, Cronbach's alpha (a) coefficient was 0.938.18 The corresponding value in the current study was 0.980.

Data was analysed using SPSS 21. The normal distribution of data was evaluated using the Kolmogorov Smirnov test. Descriptive statistics, including mean, standard deviation, frequencies and percentages were calculated, while student's t-test was employed for comparisons, while level of relationship between two continuous variables was evaluated using the Pearson correlation test. One-way analysis of variance (ANOVA) was used to evaluate quantitative data in more than two groups. For all tests, level of significance was set at p<0.05. 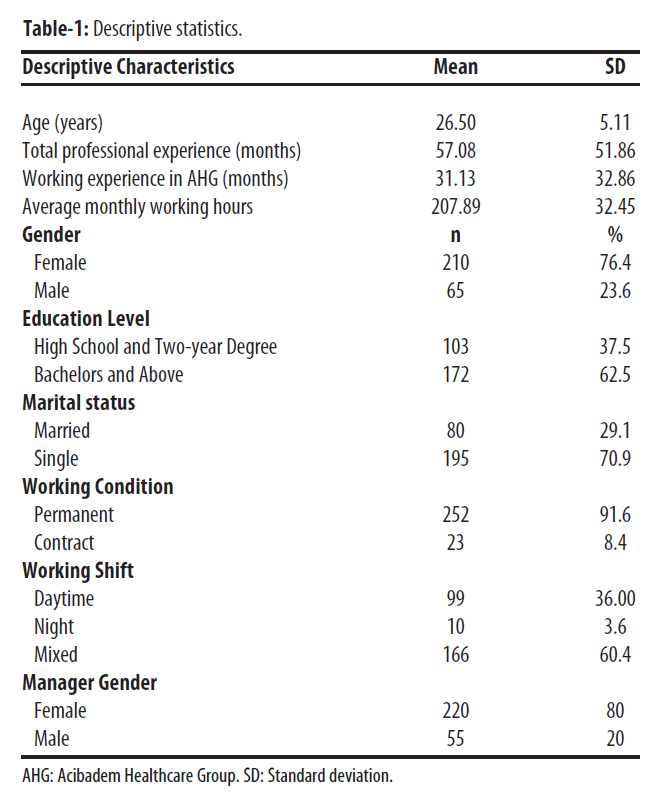 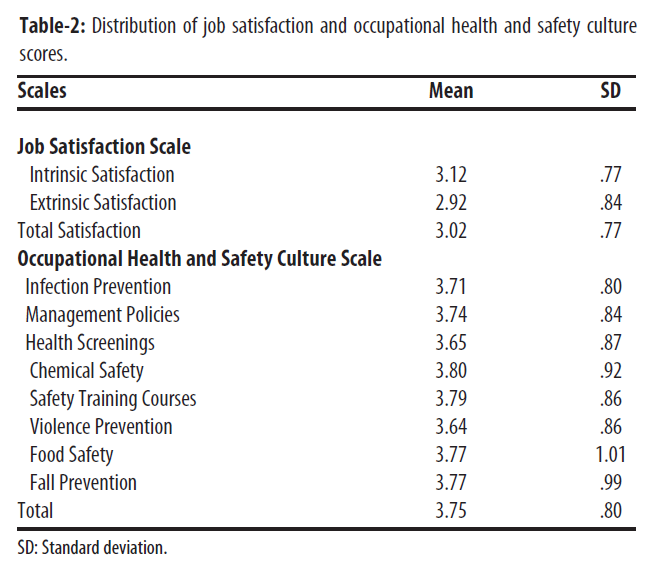 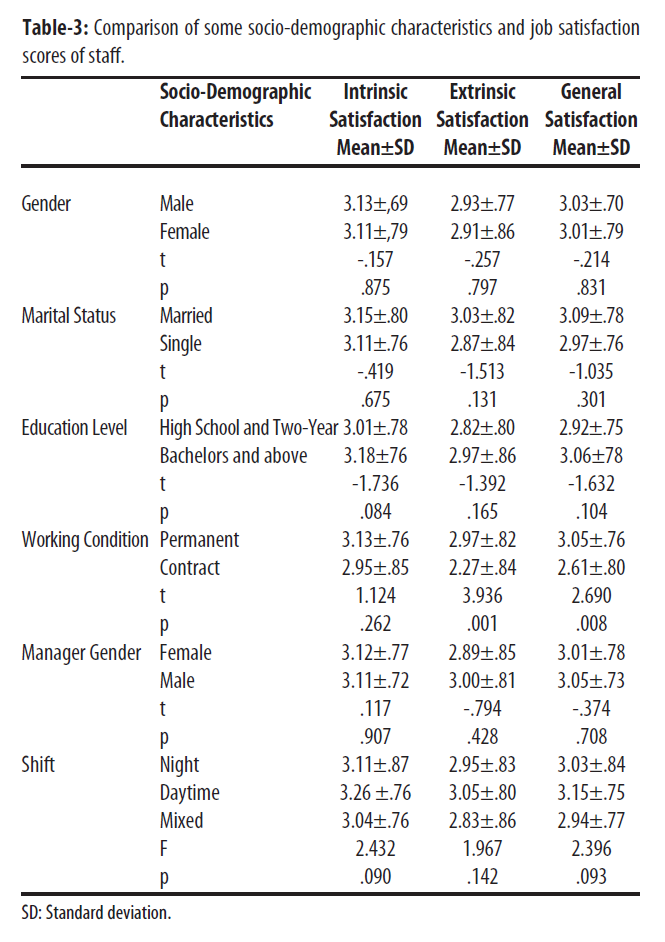 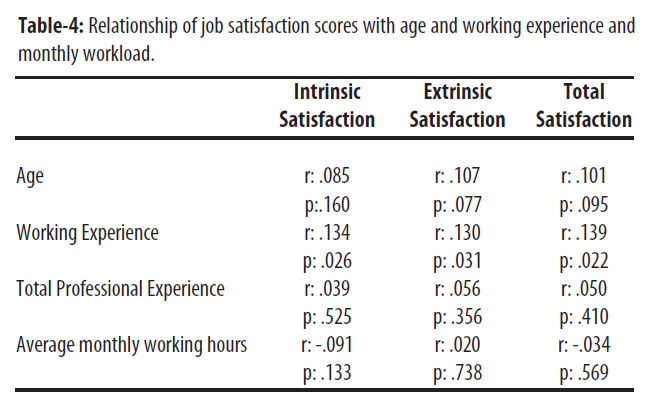 There was a positive correlation between job satisfaction and occupational safety perception (p<0.001). The mean monthly working hours was 207.89±32.45 (Table-5). 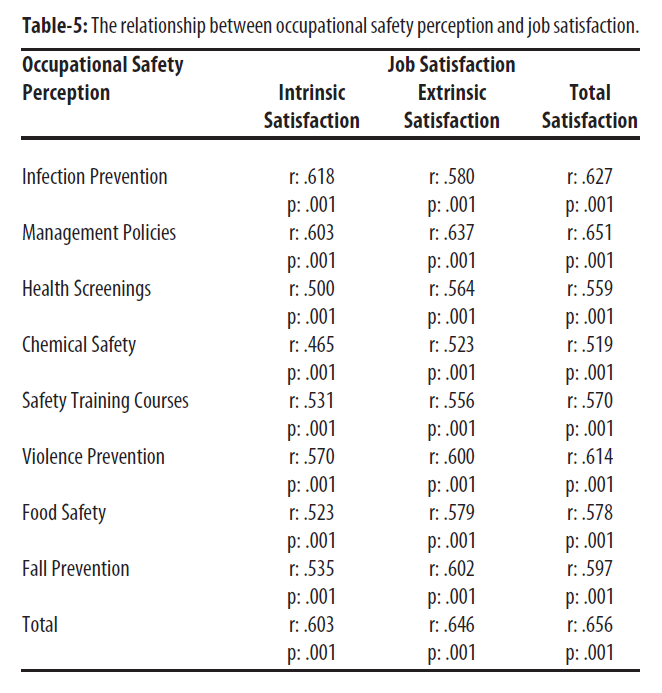 In this respect, the study showed some differences from other comparable studies. In a study with 255 healthcare professionals employed in three hospitals in Kirklareli, Turkey, male professionals were found to relate more positively to their working environment compared to their female colleagues. It was also observed in the same study that the daytime staff evaluated the working environment more positively compared to the staff that worked in shifts. Accordingly, there was statistically significant relationship between levels of job satisfaction and variables such as gender and working structure (p <0.05).20 In addition, while the intrinsic job satisfaction scores of both groups were equal, it was found that extrinsic job satisfaction scores of daytime staff were higher than those of shift staff, but it was not significant.20

The only sociodemographic characteristic that exerted some level influence over the extrinsic satisfaction scores in the current study was working conditions, namely whether the nurses were employed on a permanent or contractual basis. The reason for higher extrinsic and general satisfaction scores of the nurses that are employed under a permanent contract may be that they are subject to regulations that give them greater rights and benefits under Turkish law.