Assessment of the normal pediatric pineal gland — MR findings of a single centre; A retrospective study

Objective: To analyse the size and morphology of the normal pineal gland in the paediatric age group using magnetic resonance imaging.

Method: The retrospective study was conducted at the Aga Khan University Hospital, Karachi, and comprised data of patients aged <18 years who had magnetic resonance imaging done between 2007 and 2017. Pineal size was estimated measuring its largest anteroposterior and supero-inferior diameters on sagittal T2-weighted sequences on any slice with maximal diameter. The width of pineal gland was measured on axial or coronal T2 sequences. The volume, morphology and enhancement patterns of the gland were also assessed. Data was analysed using SPSS 21.

Conclusion: Comprehensive knowledge of the size of the typical pineal organ is useful for radiologists in the identification of pineal gland anomalies and the exclusion of neoplastic lesions.

The pineal gland is a small neuroendocrine organ that plays a role in the regulation of the circadian rhythm, and increases in weight and volume with age, showing gradual increase in adulthood as well.1-3 On magnetic resonance imaging (MRI), the pineal gland appears iso-hyperintense and isointense on T2- and T1-weighted imaging, respectively. The gland usually shows homogenous enhancement, but partial cystic component or calcifications may be identified which results in homogeneous enhancement.4,5 A significant size of the gland can result in hydrocephalus due to aqueduct obstruction and may simulate a pathologic lesion.6

The presence of a pineal cyst or cystic changes within the gland is a benign incidental finding in children, with a prevalence ranging from 0.6% to 57%.7 The benign cyst causes pineal gland enlargement, heterogeneous enhancement and overlapping imaging features with tumours, causing increase in interobserver variability compared to the solid-appearing homogenous pineal gland. A study suggested that this variability is likely because of an increase in cyst size with growth of the body in the initial two years of life.8

The current study was planned to establish the normative values of the size and morphologic appearances of the pineal gland in the paediatric population of an Asian country and to formulate gender- and age-specific criterion for adequate comparison in assessing pineal gland diseases both in daily practice and in clinical radiology.

The retrospective study was conducted at the Aga Khan University Hospital (AKUH), Karachi, and comprised patient data between 2007 and 2017. After approval from the institutional ethics review committee, data was extracted using simple random sampling technique from the hospital's Picture Archiving Communication System (PACS) of inpatients and outpatients aged <18 years who had MRI done and a pineal gland could be clearly identified. Data of patients with any known endocrinological condition or malignant tumour, undergoing radiation or chemotherapy and cases in which MRI artifacts were hampering the evaluation of the gland was excluded.

MRIs were performed on 1.5 and 3.0 Tesla MR Systems and were included if the sagittal T2-weighted sequences had a slice thickness of no more than 2mm to minimise partial volume effects. The pineal size was estimated measuring its largest anteroposterior (AP) and supero-inferior diameters (H) on sagittal T2-weighted sequences on any slice with maximal diameter. The width (W) of the pineal gland was measured on axial or coronal T2 sequences. On the basis of findings by Lundin and Pedersen,9 the volume (V) was calculated according to the formula V=1/2 X AP X H X W. Additionally, morphology of the gland, whether solid, solid-cum-cystic or completely cystic, was assessed and maximum single dimension of the cystic component was measured on any sequence. Enhancement pattern, whether homogeneous, heterogenous (patchy or peripheral), or lack of enhancement of the pineal gland was also evaluated. The data was acquired by a senior fourth year Radiology resident and was reviewed by a board-certified attending paediatric radiologist with at least five years of experience.

Data was analysed using SPSS 21. Mean and standard deviations were calculated for quantitative variables after testing for normality through Shapiro Wilk test and histogram. Frequencies and percentages were calculated for categorical variables. Spearman correlation was used for estimating the correlation between advancing age and size of the pineal gland cyst. Chi square and Fischer exact test were used to compare the pineal morphology between the age groups as well as pineal morphology and pattern of enhancement. P<0.05 was considered statistically significant. 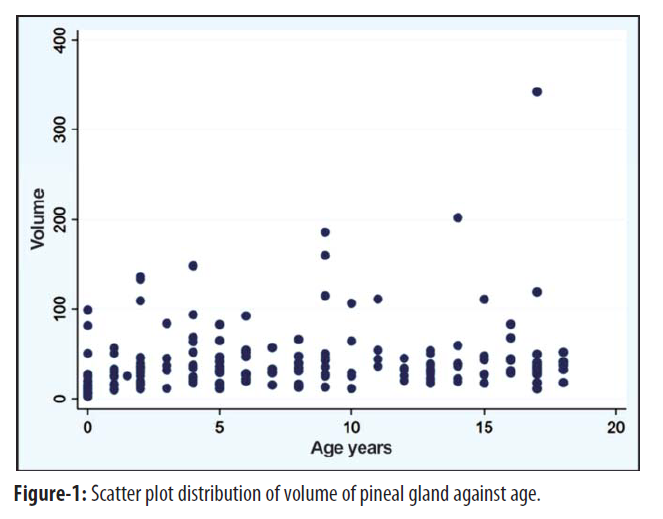 In terms of pineal gland morphology, mean size of cyst was 2.77±1.4mm (range: 1.2-7.5mm). Morphology of the gland was compared with respect to gender and among different age groups which did not reveal a significant difference (Table).

No significant differences in the pattern of enhancement were found in the different age groups (p>0.05). Most of the pineal glands which were predominantly solid-appearing glands, showed homogenous enhancement after administration of gadolinium. Patchy and peripheral enhancement characteristics were found mostly in glands with presence of cystic components in solid, solid-cum-cystic and purely cystic glands (p=0.017, p=0.001, p=0.032) respectively. There was no significant correlation of age groups with size of cyst by using Spearman's correlation test (p=0.263).

Since the cystic pineal gland is part of the spectrum of normal pineal gland morphology, the current study included it in the measurement of pineal gland volume. The results showed that the volume of the gland increased with age, but there was no statistically significant association with gender. The maximum mean volume of pineal gland was 342mm3. Compared to the findings, Bumb et al. also calculated the pineal gland volume, but did not include the cystic component of the gland.10 The authors showed that the solid pineal parenchymal volume correlated more strongly with age than did the cystic pineal parenchymal volume. The data of their study showed an increase of pineal volume with age, which was especially strong if only solid parenchyma was included (r=0.66). Considering the larger number of patients and inclusion of the cystic component in the volume of the pineal gland, the results seemed more generalisable.

The current study used the same formula to measure pineal gland as used by Schmidt et al.11 According to their results, in patients <2 years old the volume of the pineal gland was 26.9mm3, and in patients 2-20 years old, the size of the gland was larger and remained stable with an average volume of 56.6mm3. In comparison, the current study divided the samples into three sub-groups, as literature shows, the gland shows that growth occurs predominantly in the first two years of life.3 The study estimated a mean volume of 30.2mm3 in males, 24.8mm3 in females in patients aged <2 years and remaining stable up to 18 years of age with measurable volumes showing a significant difference between these age references. The gland was significantly smaller in younger patients than in patients aged 2-18 years which is in keeping with previous studies.3 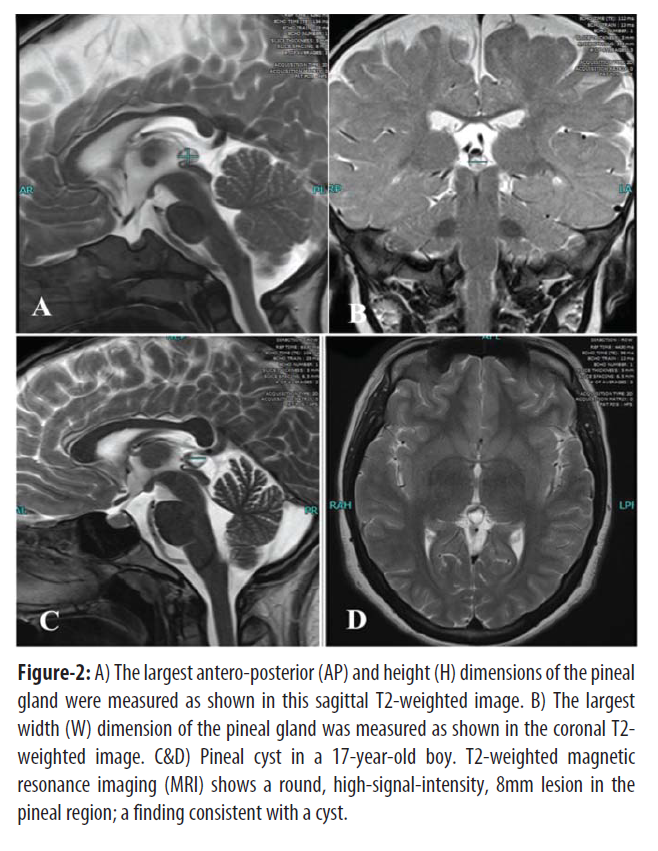 On the basis of the observations, it can be suggested that if the size of the pineal gland exceeds the above-mentioned dimensions, it should raise the suspicion for pineal gland pathology and at least require a follow-up MRI to document stability. This is similar to a normative reference value of 10mm published in literature.3,5,11,12 Thus, a pineal gland that measures <10mm in each dimension, whether or not there are cysts or inhomogeneous enhancement, may be considered entirely normal and excludes most neoplasms.13

Occasionally, associated small cysts or calcifications may produce a heterogeneous enhancement pattern, giving a false impression. There will be divergent cases that may show increased AP diameters with no other suspicious features, which can be followed serially over a period of 1-2 years to document stability. In the current study, prevalence of cystic components within the pineal gland was 25.5% (Figures-2C-D). No statistically significant association of cyst size was noted with age and gender. The maximum size of the cyst in 0-2 years of age was 5mm, in 2-10 years it was 6.3mm and in 10-18 years it was 7.5mm. Based on these observations, it is postulated that if isolated cyst size is >8mm, careful evaluation for other radiographical features should be made. These suspicious MRI features include large multilocular cyst, nodular wall enhancement, wall thickness >2mm, and signs of mass effect over tectal plate and hydrocephalus. Presence of these features along with the presence of a cyst >8mm in size would need follow-up MRI in children to document stability or exclusion of tumour because pineal gland tumours with cystic morphology. Similar recommendations were made in earlier studies.14-17

Pineoblastoma is a very slow-growing tumour and may show the presence of cystic component and can be easily confused with normal pineal gland cysts. Early diagnosis of pineoblastoma <15mm in size has been shown to improve survival rates in these cases of trilateral retinoblastoma.6,7 These patients require interval follow-up MRI scanning for monitoring even in the absence of above-described suspicious MRI features or symptoms, unlike patients without retinoblastoma, which has also been documented earlier.18 In a clinical setting, common pineal gland tumours are usually similar in signal intensity to the normal gland. It also has analogous enhancement features in comparison to these tumours, making it arduous to identify the tumour itself, thus requiring a road-map of normal volume ranges.19  Pham et al. have shown that pineoblastoma patients did not show significant differences in the size of the pineal gland and pineal gland cysts compared to age-matched controls. They also suggested that their data, therefore, could serve as a reference for the volume of normal pineal glands and pineal cysts in the diagnostic workup of retinoblastoma patients with suspected pineoblastoma.20

The current study has some limitations, as it did not compare the results with tumours, such as pineoblastoma. It only evaluated the single largest dimension of the cystic component of the pineal gland, and volume of the cyst was not calculated. Additionally, it did not evaluate the morphology of cystic glands, whether they were unilocular or multilocular, and it also did not measure the wall thickness of the cystic component. The study did not comprise follow-up imaging of patients with cystic pineal glands to document their stability. Lastly, there was no computed tomography (CT) imaging available to confirm the presence of calcifications which may have also contributed to heterogeneous enhancement in the glands.

We hope that the current study will be helpful in the evaluation of pineal gland size and morphology in south Asian populations.

The average size of the normal pineal gland in infants and children aged 0-18 years was established as a marker for south Asian populations. Comprehensive knowledge of the size of the typical pineal organ is useful for radiologists in the identification of pineal gland anomalies and in the exclusion of neoplastic lesions.

Disclaimer: Dr. Zafar Sajjad was a professor of radiology at the Aga Khan University at the time of the study. He has since then moved to Cleveland Clinic Abu Dhabi; however remains a visiting faculty member.