Objective: To assess the relationship between the educational environment and academic performance of undergraduate medical students of Azad Jammu and Kashmir.

Method: The cross-sectional study was conducted from September 2018 to September 2019 at Poonch Medical College, Rawalakot, Azad Jammu and Kashmir, and comprised undergraduate medical students of either gender from first to fifth year of studies. Data was collected using the Dundee Ready Education Environment Measure questionnaire which was distributed electronically to the students. The percentage of scores achieved in the last professional examination was taken as the academic performance, and it was corelated with the questionnaire's subscale scores. Data was analysed using SPSS 23.

Conclusion: There was found a huge scope for improvement of the educational environment.

Training settings could be described as anything immediately or inadvertently affecting teaching.1 We severely need to assess our programme's power during the modern age of accountability and regression testing, and to select feasible areas for academic revision. Knowing about the educational environment will assist us in concentrating on what we need to maintain, build and enhance.2,3

A learning atmosphere is something that both the learners and the educators encounter and interpret.4 These views would be focussed on three key elements: physical setting, mental environment, and cognitive climate.5 A learning environment study aims at evaluating the attitudes of learners about their surroundings, and can direct the educators to introspect, design and integrate the greatest teaching approach for improving the academic climate.6 The latest desire to improve efficiency assessment processes in healthcare organisations has resulted in a revived involvement in the views of the academic setting by the learners.7 For instance, a beneficial teaching atmosphere, cosy teaching spaces, receptive clinical climate, and empowered, qualified and accessible educators, are thought to boost learner satisfaction, which, in turn, contributes to greater teaching commitment and enhanced efficiency.8

For dental practitioners and in the context of medical schooling, the current assessment of the academic setting has become a significant problem. While several steps have been recommended concerning the academic setting, the Dundee Ready Education Environment Measure (DREEM) continues to be the main discussion point.9 Training is the backbone of any instructional setting. Therefore, attempts to make this training more appealing and friendlier without undermining its value needs to be considered.10 Data obtained from these inquiries can be used to enforce and evaluate curriculum, instructional distribution, and physical landscape modifications. Although not relying on any particular academic theory, the professional medical schemes have released countless assessments of the instructional setting. In exchange for academics to provide their students with the greatest standard of teaching, creating a learning-friendly atmosphere is a precondition. This can be accomplished by defining environmental flaws.4 The understanding of the instructional setting by students is a helpful foundation for changing and enhancing their performance. The DREEM inventory has been created to index the medical and social schooling climate.11,12 In Europe, Africa, Asia, Australia and the United States, DREEM has been evaluated.13

To the best of our knowledge, no research has been conducted in Azad Jammu and Kashmir (AJ&K) to assess the instructional climate. Besides, a number of medical schools both in public and private sectors have started functioning in the region over the last 10 years, and that has required the evaluation of the instructional setting. The current study was planned to assess the relationship between the educational environment and academic performance of undergraduate medical students in AJ&K.

The cross-sectional study was conducted from September 2018 to September 2019 at Poonch Medical College, Rawalakot, AJ&K, and comprised undergraduate medical students of either gender from first to fifth year of studies who were assessed the DREEM questionnaire.14 After approval from the institutional ethics review board, the sample size was calculated using the formula n = Z2 P(1-P)/d215 with alpha value 0.05, while the prevalence rate was taken as 50% since the prevalence was not known. The study questionnaire along with informed consent form was electronically distributed to all the 500 medical students studying at the time. Incomplete questionnaire were excluded.

The scores were interpreted as recommended.14 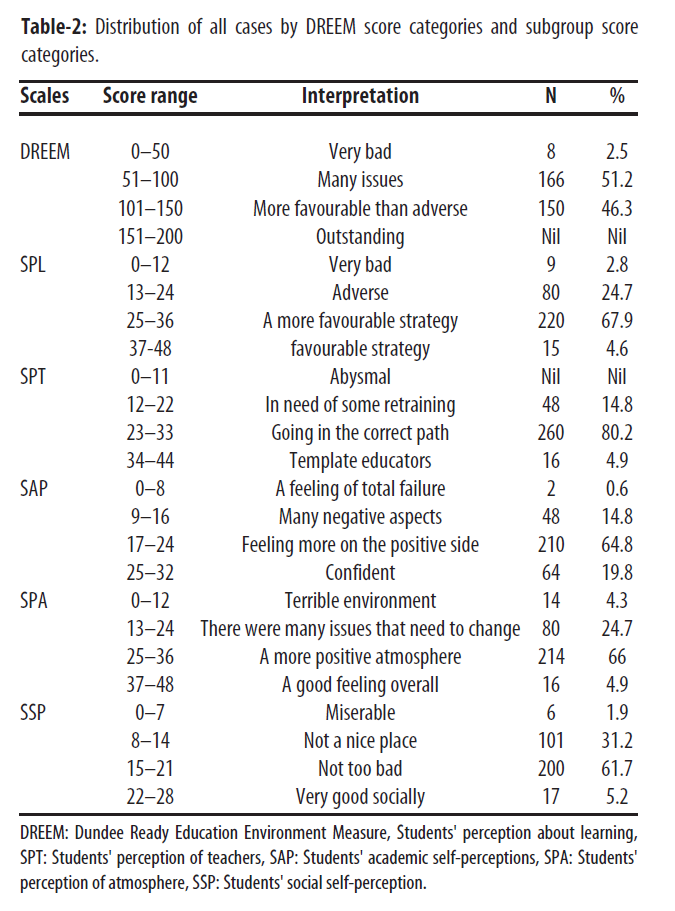 The findings suggested there is plenty of scope for improvement in terms of academic performance and DREEM scores. None of the students fell into the 'outstanding' category of DREEM scoring. A similar study involving Pakistani medical students revealed a mean DREEM score of 127 ±19.3, which was much higher than that noted in the current study.16 Regarding the DREEM subdomains, the current study did not find a good score compared to a previous study, which revealed higher scores in almost all domains.17 An Australian study also showed higher scores for clinical year undergraduate medical students.18 A Pakistani study showed DREEM subdomain scores19 that were very similar to the current study's findings.

The current study raises critical questions. Why did females score better in academic performance? Why did fifth-year students have the highest DREEM score? Further studies are recommended to answer these questions and find out other significant factors responsible for better academic performance.

In terms of limitations, the current study was done at a single-centre and comprised only medical students. Nursing, dental, physiotherapy paramedics and postgraduate students could be included to attempt a clearer picture. Due to a lower response rate, the absolute precision of the study is >5%.