Objective: To examine and predict the relationship among social appearance anxiety, emotional regulation and quality of life in individuals with premature canities.

Methods: The correlational study was conducted from September 2019 to February 2020 in Lahore, Pakistan, after approval from the Riphah International University, Lahore, and comprised individuals of either gender aged 15-25 years with premature canities. Social Appearance Anxiety Scale, Emotional Regulation Questionnaire and the Quality of Life Scale were used to measure the study variables. Data was analysed using SPSS 21.

Results: Of the 100 subjects, 50(50%) each were males and females. The overall mean age was 19.80±3.33 years. Individuals with premature canities had significant social appearance anxiety which was positively correlated with emotional suppression. As social appearance anxiety increased, the quality of life decreased (p<0.05). Lower level of cognitive reappraisal and higher expressive suppression were linked with improved quality of life in individuals with premature canities (p<0.05).

Conclusion: Social appearance anxiety, emotional regulation along with age were together found to be the predictors of quality of life.

Hair greying, or canities, is a part of progressive aging regardless of race and gender, but ethnicity and race do influence the onset pattern of the process. Premature canities in European population would indicate the onset <20 years of age, in Asians <25 years and in Africans <30 years.1 Anxiety related to body shape and fear of other’s negative evaluation is called social appearance anxiety (SAA) of an individual.2 A study determined that anxiety of appearance significantly predict dissatisfaction about body shape, image, blumic symptoms and anxiety related to eating.3 No apparent distinctions regarding SAA measurement in both genders has been reported. The procedure of initiating, avoiding, reducing and managing or regulating the production, type, severity and length of intrinsic feeling states is referred to as emotion regulation (ER).4 Two strategies have been commonly highlighted.5 The act of re-examining the situation to minimise its emotional impact is called reappraisal. On the contrary, decreasing the manifestation of emotional behaviour while the individual is going through an emotional state is referred to as suppression of emotions. It is highlighted that both genders express emotions differently. Women regulate their emotions in a better way compared to men.6 The general happiness of individuals and societies, indicating positive and negative characteristics of life are referred to as quality of life (QOL).7 A study suggested that QOL of individuals with premature canities can be affected by social stigma and they may suffer from withdrawal and rejection from their social environment.8 Premature canities has major side effects on an individual’s appearance, self-esteem and sociocultural acceptance.9 The current study was planned to check the occurrence and prediction of SAA, ER and QOL in individuals with premature canities, and to assess gender difference in this regard.

The correlational study was conducted from September 2019 to February 2020 in Lahore, Pakistan. After approval from the ethics review board of Riphah International University, Lahore, the sample size was calculated through G-Power calculator while opting for ‘F tests’ in the family dialogue box, keeping effect size medium 0.25, probability of error 0.05, and power 0.95.10 The sample was raised from the general population using purposive snowball sampling technique. Those included were individual of either gender aged 15-25 years irrespective of marital status who were having premature canities. People who were physically handicapped or who were suffering from recent trauma or with premature aging syndrome, hypomelanosis hair disorder or spoliosis were excluded.

Data was collected after obtaining informed consent form all the participants. A self-constructed demographic information sheet comprising gender, age and family-related information was filled by the participants. Further data was collected using the Social Appearance Anxiety Scale (SAAS), Emotion Regulation Questionnaire (ERQ) and Quality of Life Scale (QOLS) after permissions were taken from the original authors of each scale. With due permission from the authors, the scales were translated into Urdu using MAPI guidelines.11 The Urdu versions were used instead of the original English versions. SAAS is a 16-item tool with internal reliability of 0.942, High scores indicate an increase in SAA. ERQ is a 10-item self-report tool with a reliability range from 0.73 to 0.79.5 It measures both cognitive reappraisal (CR) and expressive suppression (ES). Higher score on each strategy item indicates increased use of that strategy by the individual. The 18-item QOLS has proven internal consistency with α = 0.82 to 0.92.12 High score is the predictor of good QOL. It took 10-15 minutes to complete each questionnaire.

Data was analysed using SPSS 21. Inferential statistics, Pearson Product Moment Correlation, independent samples t-test, multiple regression were used as analysis. All the assumptions of parametric tests were verified before extracting analyses which included normality, which was checked via p-p plots, q-q plots, and Kolmogorov Simrnov test, homogeneity of variance, which was checked using Levene’s tests, and level of measurement as ratio or scale. P<0.05 was considered significant. 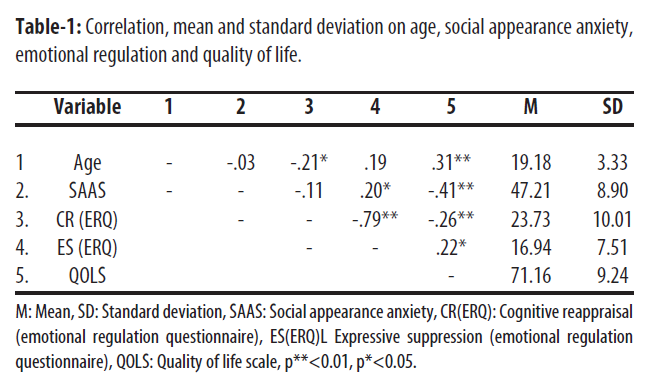 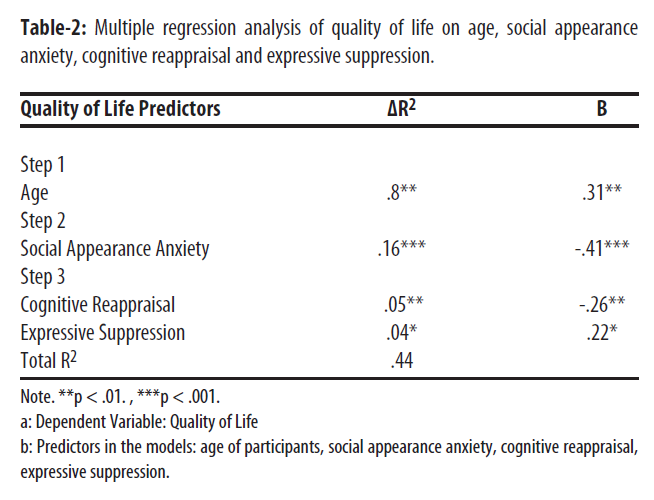 The mean age of the sample in the current study was 19.80±3.33 years. In a pervious study done in Pakistan it was 20.94±1.85.13 In the present study, SAA had no association with CR. There is limited literature available regarding these two variables, but a previous research on social anxiety (SA), which is broad construct similar to SAA, suggested there was a negative relationship between SA and CR.14 The current research also indicated a positive correlation between SAA and ES. Though scarce data is available, a research found that socially anxious individuals stated more use of ES compared to their peers who did not have SA, and had higher uncertainty regarding their expression of emotion and greater problems in emotional responding.15 The current study also suggested that SAA had significant negative association with QOL, which is in accordance with literature.16,17 The current study indicated a negative relationship between CR and QOL, which was contradictory to past studies.18,19

The current study suggested that ES and QOL shared a significant positive relationship, while earlier studies indicated a negative association between the two elements.17 Cultural differences may explain the different findings.20

The current study depicted that SAA, CR and ES were significant predictors of QOL, which is in line with literature.16 The present study also showed gender differences regarding SAA, with females having slightly more SAA than males, which has been reported earlier as well.3,17,21 Males in the current study had high CR scores, which is consistent with literature.22 Findings also showed that female scored high on ES strategy; a finding reported earlier, too.23,24 Findings of gender difference in relation to QOL observed no significant differences between the mean scores of males and females which means there was no gender difference in this case. This is also consistent with literature.25

The major limitation of the present study was the newness of the topic on which limited literature was available to either support or oppose the findings, and there was no appropriate research tool available for measuring QOL related to premature canities. Valid and reliable indigenous tools should be developed to accurately investigate the variables free from cultural and language biases.

SAA, ER and age were together found to be the predictors of QOL. SAA was more common in females than males.