Objective: To identify exercise regimes having a short duration and yet incorporating the effects of both aerobic and resistance exercises.

Method: The randomised study was conducted from December 1, 2019, to April 31, 2020, at Ziauddin Hospital, Karachi, and comprised individuals of either gender aged 20-40 years with class-I obesity. All participants were initially screened using a physical activity and readiness questionnaire to determine if they were fit to perform the exercises. Subsequently, dynamic exercises were introduced based on the guidelines of the American College of Sports Medicine. The subjects were randomised into aerobic group A, resistance group B and dynamic resistance group C. The intervention lasted 12 weeks. The quantification of exercises was done using the frequency, intensity, time, and type protocol.

Obesity is a complex and chronic medical condition that has a negative impact on human health.1 An exponential growth in the prevalence of obesity over the last three decades has been noted where rates of incidence have nearly doubled among adult and childhood populations and have tripled among adolescents.1 Obesity has now become a public health concern that has profoundly impacted the rate of morbidity, mortality and cost of healthcare.2 According to the definition of the Clinical Association of American Endocrinologists, obesity is 'adiposity-based chronic disease (ABCD)' that is globally accepted as a medical condition and requires immediate attention of the healthcare sector.3 The World Health Organisation (WHO) states that around 26% women in Pakistan suffer from obesity, while just 19% of the men are obese. A study reported that the rate was 28% for men and 38% for women, which is a huge gap between the two genders. Obesity is higher in urban areas (56% in men and 67% in women) compared to rural areas. Even in youth, obesity is growing at a fast pace. As per 2013 statistics, it was 10%. In 2010, approximately 3.4 million people expired because of obesity.4 The rising risk of obesity has created susceptibility for every individual irrespective of age, gender and demography, and, therefore, the earlier studies that were mainly aimed at devising preventive strategies5 and tested various approaches in schools, work-sites and community are now moving towards the treatment approaches for obesity.6 To direct healthcare professionals in handling obesity, several guidelines have been prepared that outline multiple therapies, like lifestyle modifications, increased physical activities, dietary modifications, use of medications and in some cases even surgeries.7,8 Modern approaches for managing obesity consider multifactorial causes of weight-gain and enormous health benefits to be derived from weight-loss.9 The foundation of weight-loss approach should primarily be based on high-quality diet and adherence to exercise on a prescribed criteria of frequency, intensity, type and time with a minimum of 150 minutes of moderate weekly activity (>30 minutes per day for 5 days).10 Pharmacotherapy is normally indicated among patients who fail to achieve a meaningful weight-loss of >5% of total body weight after following a regulatory prescribed guideline for 3-4 months.11 Surgical procedures are recommended for patients with body mass index (BMI) >35kg/m2 along with co-morbidities, like type 2 diabetes mellitus (T2DM) and hypertension (HTN), and for whom all the appropriate non-invasive techniques have been exhausted.11-13 Multiple studies have provided evidence that although the effects of exercises are positive for weight-loss, its impact is not sustainable, and that 60-90 minutes of exercise under close supervision is recommended for effective weight-loss.13 Adherence to an exercise regimen among the general population is poor mainly due to the commitment of time required to complete a single exercise session.13,14 Therefore, clinicians and healthcare providers are supposed to devise a concept of tailored exercise programme that could be time-effective.15 Evidences have revealed that type and amount of exercise are effective in weight-loss.13 Therefore, quantification in terms of mode, frequency, duration and intensity should be well documented to facilitate adoption and maintenance of habitual exercise. Besides, physical activities, including aerobic or resistance exercises or high- and low-intensity training, do not much affect weight-loss and that their only observable impact was of intensity, as it reduces time commitment.13

The current study was planned to identify exercise regimes having a short duration and yet incorporating the effects of both aerobic and resistance exercises.

The randomised study was conducted from December 1, 2019, to April 31, 2020, at Ziauddin Hospital, Karachi. After approval from the institutional ethics review committee, the sample was rasied from among adults of either gender aged 20-40 years with with BMI 30-39.9kg/m2. Those having undergone recent surgery, known cardiac disease or any comorbidity that could limit exercise ability were excluded.

Sample size calculation was calculated by World Health Organization Software named as "sample size determination in health sciences".16 A previous study conducted in Pakistan 2018, titled as "Effects Of Endurance And Resistance Training On Body Composition"17 was considered to calculate sample size. Considering 95% of confidence level, power of test 80% and a mean difference of 3.8 a sample size of 102 was calculated.

After taking informed consent from each subject, they were initially screened using a physical activity and readiness questionnaire, and were then randomised using the envelope method of simple random sampling technique into three equal groups with uniform gender distribution into aerobic group A, resistance group B and dynamic resistance group C.

The exercise sessions lasted 12 weeks based on the guidelines of the American College of Sports Medicine and the quantification of exercises was done using the Frequency, Intensity, Time and Type (FITT) protocol18 (Figure). The training sessions were conducted at the institutional fitness gym based on warm-up 5-10 minutes, followed by conditioning phase of 20 minutes and a cool-down phase of 5-10 minutes. 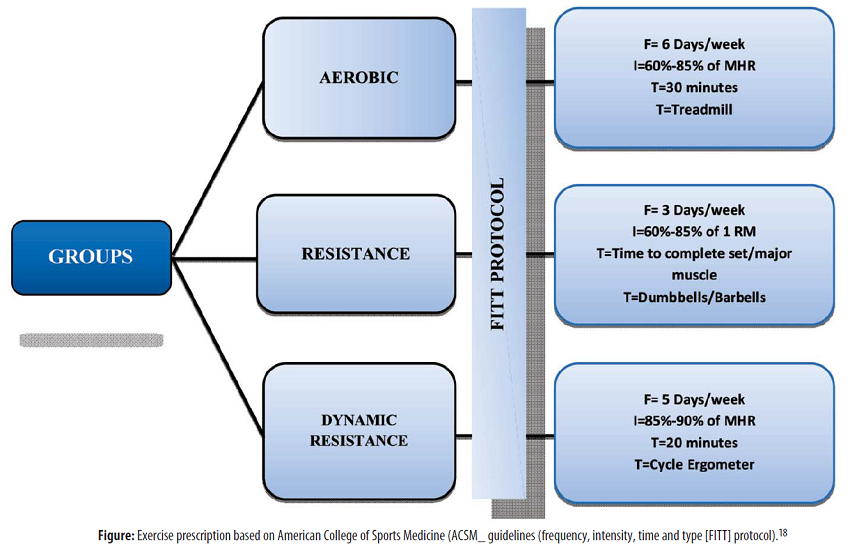 Dynamic light aerobic warm-up exercises were performed by the participants for 5-10 minutes before the start of the conditioning. Two different exercises that were performed included high-knee in which the knees were lifted as high as possible in such a manner that both feet were at one time above the ground, and the jumping jack exercise in which a simultaneous movement of upper and lower limb was performed in a manner that every time during a jump the arms were thrusted over the head while the foot moved out to the side and than returned to the original position. There were 10 repetitions of both the exercises.19

In group A, aerobic exercise was performed with the frequency of 6 days per week for 30 minutes per day. The patients were informed about the cardiac prodromal symptoms, like shortness of breath, dizziness and chest discomfort that might develop during exercise and were advised to immediately inform the physical therapist. The therapist, standing beside the treadmill, instructed the patient to stand in a walking position on the treadmill with hands holding the handrail while keeping the shoulders relaxed. The exercise intensity was set at 60-85% of maximal heart rate (MHR) by using the Karvonen formula.19 The exercise was started at a slow pace and was then gradually increased up to a speed within the range of 60-85% of MHR. For precautionary purposes, a safety clip was attached to the patient's clothes for the emergency shut-off of treadmill in case of a fall.

In group B, the protocol was based on strengthening exercises of 10 major muscle groups: biceps, triceps, pectoralis major, deltoid, latissimus dorsi, abdominals, back extensors, hamstrings, quadriceps and calf. The intensity of the weight-bearing exercises was set at 60-80% of 1 Repetition Maximum (RM), performed at a frequency of 2-3 days a week using dumbbells.20

The cool down phases lasted 5-10 minutes during which low-intensity, long-hold stretching was performed of the lower and upper limbs.

The body fat composition of the participants was calculated using the skin fold thickness method. The body fat percentage (BF%) was calculated every day before and after the training session and was compared post-intervention. BMI was calculated using the standard formula and readings were recorded daily after each session. Dose-response analysis of the outcome was done using a probit regression curve for determining the dosage of exercises to get the desired responses independently in male and female populations.22

The impact was significant in all the three groups and in both genders (p<0.05) (Table-2).

Statistical values suggested a significant difference in the ratio of mean square (p<0.025) for both male and female subjects (Table-3).

There was evidence significantly better results in group C males than groups A and B, while in females, the response in groups C and A were found to be equally effective (Table-4).

In both male and female subjects, the median inter-group differences before and after the interventions significantly differed (p<0.001) (Table-6).

The effect was significantly better in group C than groups A and B (Table-7).

The findings revealed that BMI and BF% in dynamic resistance training recorded better values than aerobic and resistance training. These findings are consistent with the earlier findings.23,24 A study revealed that high-intensity interval training (HIIT) required 40% less time than moderate-intensity continuous training (MICT) protocol.20 Another study reported aerobic exercise mean reduction of -1.1 BF% after 6 months of training that was far lower than the values observed in resistance (-1.6) and combine protocol (-1.4).25

In a 26-weeks study of obese adults aged 65 years and above with BMI >30kg/m2, participants were randomly allocated into aerobic, resistance and combine therapy groups. The study provided evidence that 6 months of training reduced the values in all three groups.26 On an effect size of 422 participants included in 21 studies, the impact of resistance, endurance and combine therapy approach was determined on body fat mass that witnessed a larger impact in combine therapy groups, followed by endurance training and resistance training groups.27 The pattern of the results suggested that of all the approaches, the impact of aerobic and combine/concurrent exercises were equally effective. Similar findings were reported by the current study.

Acknowledgement: We are grateful to Dr Sumaira Imran Farooqui for supervision and constant support, and to Mr Ali Farhad for steering us in the right direction.

Trunk extensors endurance with arms parallel to the trunk is superior to other arms positions: Randomized controlled trial