Objective: To compare the effects of Mulligan technique and muscle energy technique in patients with adhesive capsulitis.

Methods: The randomised controlled trial was conducted at the Department of Physiotherapy, Government Mian Munshi Hospital, Lahore, Pakistan, from September 1, 2019, to March 31, 2020, and comprised patients with adhesive capsulitis who were randomised into Mulligan mobilisation Group A and muscle energy technique Group B. The outcome assessor was kept blinded to the treatment plan. Pain, range of motion and functional disability were measured using Visual Analogue Scale, universal goniometer and Shoulder Pain and Disability Indexat baseline, and subsequently at the end of third and sixth weeks. Data was analysed using SPSS 24.

Conclusion: Mulligan technique was found to be more effective than muscle energy technique in improving range of motion, and in reducing pain and functional disability.

Frozen shoulder is also known as adhesive capsulitis (AC)1 and it is characterised by pain and loss of motion. It is a self-limiting disease which resolves in around 14 months. Frozen shoulder can be classified as primary, which is idiopathic, or secondary. The primary frozen shoulder has a gradual onset and slow development of symptoms where there is no obvious trigger mechanism. In the secondary type, patients have a history of trauma or prolonged immobilisation which is due to any pathological conditions, like stroke.2 The frozen shoulder is often divided into three clinical stages, each lasting 4-12 months. The "freezing" stage begins insidiously, the patient complains of diffused pain in the shoulder, and the shoulder range of motion (ROM) decreases gradually.

The "frozen" stage presents as progressive loss of shoulder ROM. Pain is variable. Progressively the movement of glenohumeral joint of the shoulder is decreased due to the development of contracture. The third stage is the "thawing" phase in which the patient typically recovers shoulder motion. The stages of frozen shoulder are similar in diabetic and non-diabetic persons, but diabetic patients tend to become stiff faster and are less responsive to conservative therapy.3 The exact cause of frozen shoulder is unknown, and almost 2-5% of people suffer from it during the lifetime. According to a study, female in the fifth to seventh decades of life are more prone to be affected.4

The frozen shoulder affects both sides equally and infrequently presents in both shoulders in up to 50% of the patients.1 Research suggests that the process begins with the inflammation of the lining of the joint capsule. The risk factors for frozen shoulder are diabetes, thyroid disorders, and history of shoulder trauma, cervical radiculopathy, post-operative immobilisation and shoulder surgery. Duplay was the first man who described the condition in 1872 although the term 'frozen shoulder' was already used by Codman.5 He described that a patient felt pain near the insertion of the deltoid muscle, the patient cannot sleep on the affected side, and restriction in both active and passive abduction and external rotation of the shoulder joint is felt.6

Many patients come with severe  pain and restriction of shoulder motion due to weakness from rotator cuff tears or neurological deficits which appear as a separate clinical entity and the patients have no underlying cause for frozen shoulder.7 The characteristics of AC are known as shortening, thickening fibrosis of the capsule surrounding the shoulder joint. The volume of the capsule decreases due to tightness of ligaments that surround the shoulder joint which also decrease the joint ROM.4

AC is a clinical diagnosis made on the basis of a history of the gradual onset of severe shoulder pain with progressive limitation of active and passive glenohumeral movements. Gradually this area thickens and results in the shoulder becoming stiffer and more painful. Exercise therapy with heating increases the extensibility of collagen or alters viscoelastic properties of the connective tissues.6

The muscle energy technique (MET) is non-invasive. The muscle stretch helps in lengthening the muscles and fascia. MET primarily affects the soft tissues, but it also has a major role in joint mobilisation which increases ROM as well as muscle extensibility and flexibility by means of a mechanism known as "increased tolerance to stretch." Both the Mulligan mobilisation technique (MMT) and MET have proven to be effective in reducing pain and restoring function of shoulder, but no study has shown one of these techniques to be superior than the other.4

MET helps in improvement of glenohumeral horizontal adduction and internal rotation. A study said MET and post-isometric techniques, such as proprioceptive neuromuscular facilitation (PNF), are more effective than static stretching for improving extensibility of the shortened muscles.8

MMT was introduced in1999. According to this technique, the patient can move the limb in the pain-free region if its accessory glides are reduced or restored. In mobilisation with movement techniques, similar principles can be applied to the treatment of peripheral musculoskeletal disorders.9 The MMT technique is based on the Kaltenborn principles of passive mobilisation technique.10

The current study was planned to compare the effect of MMT and MET in AC patients.

The randomised controlled trial was conducted at the Department of Physiotherapy, Government Mian Munshi Hospital, Lahore, Pakistan, from September 1, 2019, to March 31, 2020. After approval from the ethics review board of the University of Lahore (UOL), Lahore, Pakistan, The sample size was calculated using the formula11:

The expected mean values were based on literature,9 while the level of significance was 95%, and expected precision level 80%. The sample size was inflated to cover for 20% dropout rate. The sample was raised using purposive sampling technique. Those included were diagnosed unilateral idiopathic AC stage I and II patients of either gender aged 35-60 years. Those with history of rotator cuff tear, rheumatoid arthritis, malignancies in the shoulder region, neurological disorders, thoracic outlet syndrome, and peripheral nerve injuries were excluded.

After taking the consent from participants the subjects were randomised using the lottery method into MMT Group A and MET Group B. The outcome assessor was kept blinded to the treatment plan.

Outcome measures were pain, ROM and functional disability which were measured using Visual Analogue Scale (VAS), universal goniometer12 and Shoulder Pain and Disability Index (SPADI).13 VAS Measurements were taken at baseline, at the end of the third week and, finally, at the end of the sixth week visual analogue scale was used for the assessment of pain 10 mm, 0 to 3 mm (no pain) 3 to 7 mm ( mild pain) 7 to 8 mm (moderate) pain 8 to 10mm (severe pain). A 33% decrease in pain constituted an appropriate standard for deciding that a change in pain was meaningful from the patient's perspective.12

Data was analysed using SPSS 24. Normality of the data was tested with Shapiro Wilk test. Numerical data, like age, SPADI and VAS scores, was expressed as mean ± standard deviation (SD). Categorical data, like gender, was presented as frequencies and percentages. Independent sample t-test was used to determine the mean difference of flexion, abduction, internal and external rotation between the groups. Repeated measurement analysis of variance (ANOVA) was applied to compare the outcome of different follow-ups. P<0.05 was considered significant. 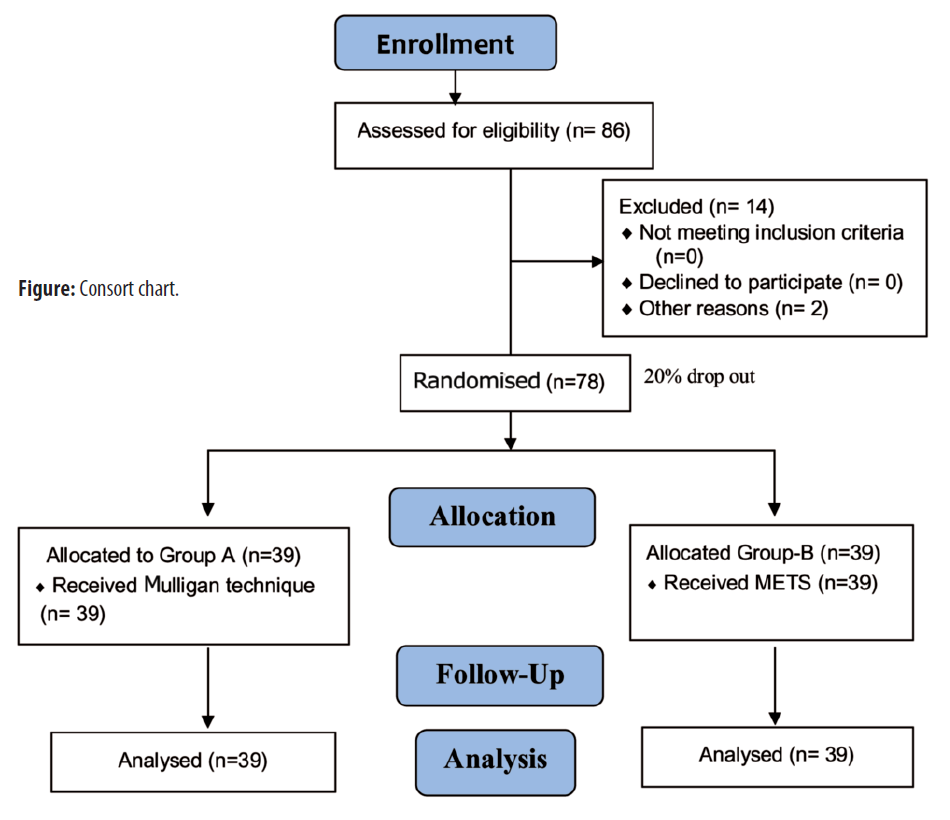 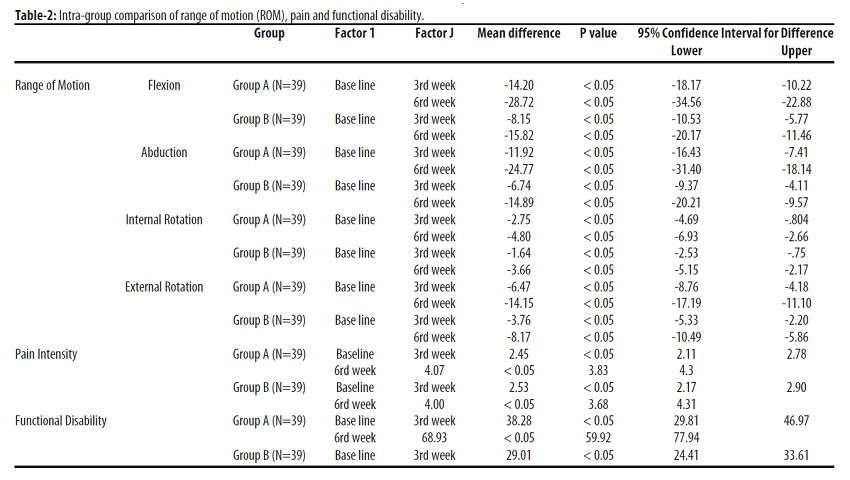 The findings of the current RCT are supported by literature.12,16

There current sample was predominantly female and this was line with literature as well.13

The current study showed significant improvement at the end of the 6-week intervention. A study on stage II AC patients reported flexion abduction improvement in the third week of treatment.14

MET has a significant role in ROM improvement.15 A study has reported improvement in Ac with mobilization with movement (MWM) as well.12

Another study showed better effects on AC with MWM compared to the Keltonborn technique.16

In one study, MET with conventional therapy reduced pain in AC patients.6

The present study showed that MMT and MET techniques were both effective in improving functional disability among AC patients, and the finding is in accord with earlier studies.17,18

The current study showed improved VAS and SPADI scores at the end of 6 weeks, while an earlier study reported better scores after 4 weeks of treatment in the MMT group.18 Another study reported improved SPADI and VAS scores in MET group compared to the Maitland technique19 group.

In terms of limitations, the current study comprised only non-diabetic patients. Further studies need to be conducted by comparing various other mobilisation techniques and treatment modalities.

MMT was found to be more useful in AC patients compared to MET in enhancing the shoulder ROM, and decreasing pain as well as functional disability.

Trunk extensors endurance with arms parallel to the trunk is superior to other arms positions: Randomized controlled trial