Cerebral myiasis is extremely rare, and surgical intervention is the primary treatment used. Successful conservative management alone, without surgical removal of the brain infestation has not yet been published.

We report a case of a 24-year-old African homeless man who was found on the street in a state of decreased level of consciousness, with larvae exiting from the left supra and postauricular dirty wounds and from his left ear. The patient was diagnosed with post-traumatic cerebral myiasis of the left temporal lobe and cerebellum. It was treated successfully by debridement of the external wounds and administration of antibiotics, without surgical removal of the brain infestations. For the first time, this case illustrates the novelty and appropriateness of the conservative management of cerebral myiasis. This is also the first report of cerebral myiasis with cerebellar involvement and the second report of post-traumatic cerebral myiasis in literature.

Myiasis is a parasitic infestation of host tissues by larvae of a variety of fly species. Infestation occurs when the female flies lay their eggs or larvae on the host’s living or necrotic tissue.1 The larvae penetrate the tissues by a combination of chemical (their digestive enzymes) and physical (their mouth hooks) activity.2,3 Cerebral myiasis is defined as a larval infestation of the brain and is exceedingly rare in humans.4 We report a unique case of cerebral myiasis managed conservatively and present an updated literature review on the subject.

A 24-year-old African homeless man was found on the street with a decreased level of consciousness in Abha city of Aseer province in the southwestern part of Saudi Arabia. He had evidence of head injury with two adjacent wounds in the left supra and retro auricular areas heavily infested with fly larvae. Upon initial assessment on December 19, 2019, in the emergency department of Aseer Central Hospital, his Glasgow coma score was 13/15, with no focal neurological deficit. Fly larvae were seen exiting in both the wounds and the left external auditory meatus (Figure-1A). Physical examination of the injuries revealed a compound fracture of the left temporal bone with a bony defect, exposing the underlying dura (Figure-1B). The serum leukocyte count was 9,380 cells per microliter (normal range: 4,000-11,000 cells per microliter) but showed marked eosinophilia. Serum electrolytes, liver function tests, erythrocyte sedimentation rate (ESR), C-reactive protein (CRP), and blood cultures were within the normal ranges.

The patient underwent emergency external wound debridement with the removal of larvae and superficial necrotic tissues. The wounds were washed thoroughly using sterile 0.9% normal saline, 3% hydrogen peroxide, and povidone-iodine solution. Following the debridement of the superficial wounds, the dura underneath the bony defect was found to be dehiscent. The larval infestation was deep and transgressed the defected dura into the brain. Given the eloquence of the brain regions involved and the multiplicity of involvement, no attempts were made to surgically evacuate the intracranial infestation. Cultures of the debrided tissue were negative for the organisms. The tissue specimens were submitted to the laboratory in 0.9% normal saline, fixed in 10% paraffin for 24 hours, cut into 5µm thick sections, stained with routine haematoxylin and eosin (H&E) stain, and examined under light microscopy. Histopathological examination showed fragmented skeletal muscle fibers, tissue necrosis, granulation tissue formation, and infiltration by acute and chronic inflammatory cells. Unfortunately, the exact species of the larvae were not entomologically identified.

The patient was placed on an intravenous metronidazole for two weeks in addition to vancomycin and ceftriaxone for four weeks to prevent secondary bacterial infection. The scalp wounds underwent  regular dressing for three weeks.

The patient showed rapid neurologic improvement with a return to baseline neurological status within one week of admission. The serum leucocyte count dropped to 3,027 cells/µL by the third week. A follow-up contrast-enhanced MRI scan of the brain obtained two weeks after hospitalization, showed a marked decrease in the size of the brain abscess and perilesional oedema (Figure-1F). The patient ultimately achieved full recovery with complete healing of the scalp wounds. The bone defect was small and required no further surgical intervention. A follow-up contrast-enhanced MRI brain scan was obtained, six months after the index visit that showed brain abscess resolution with evidence of post-inflammatory gliosis (Figure-1G). 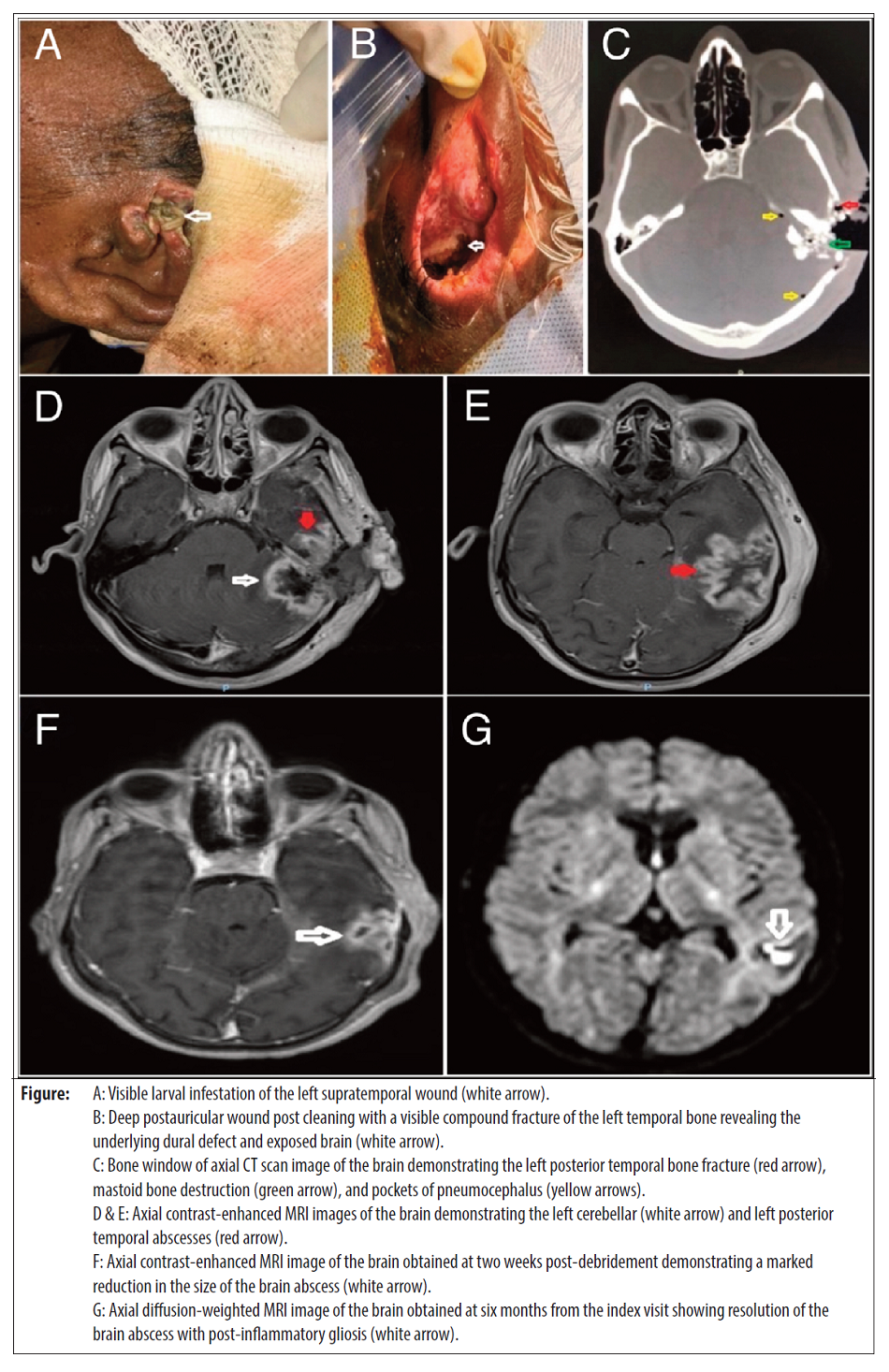 The patient provided written consent for the publication of his case reported for enhancement of science. Full ananomosity has been maintained.

The fly larva species were documented in five reported cases, presumed in two, and not reported in one case (Table). It appears that no specific species is a dominant pathogen in cerebral myiasis; instead, it correlates to the fly species endemic to the geographic location. In our case, the exact larval species was not entomologically identified, but based on the larvae’s gross features, the season of presentation, and the fly species endemic to Saudi Arabia, we presumed it to be Chrysomya bezziana.10

In two-thirds of the reported cases, cerebral myiasis occurred in the setting of a pre-existing lesion such as a scalp tumour, cutaneous myiasis, burn, or surgery (Table). Post-traumatic cerebral myiasis was reported in only one previous case.8 There was no prior wounding or lesion in three reported cases, and remarkably all the patients were in the paediatric age group (Table). Interestingly, two of the three cases were presented with intracerebral haemorrhage.2,6Consequently, cerebral myiasis, especially in endemic regions, should be considered in the differential diagnosis of spontaneous intracerebral haemorrhage in the paediatric population.

The frontal lobe of the brain is the most commonly affected lobe (80% of cases) (Table). Contiguous involvement of the temporal lobe and cerebellum, as seen in this case, has not been previously reported. In all previous instances of successfully treated patients, brain infestation was surgically removed. In our case, the debridement was superficial to the dura with no surgical evacuation of the intracranial infestation. However, the response to this conservative approach was favourable. Such a successful outcome of cerebral myiasis to mainly conservative treatment has not been previously reported. Our report indicates that routine surgical evacuation of post-traumatic cerebral larval infestation might not be necessary. A good outcome can be expected with only superficial wound debridement and antibiotics to prevent secondary bacterial infection. This report also supports that cerebral myiasis in humans is mainly an opportunistic infestation that utilizes pre-existing neglected wounds or lesions.

Cerebral myiasis is rare but can cause serious brain damage. The results from this case report are limited by the lack of fly species entomologic identification and lack of information on the exact number of larvae. Nonetheless, the case clearly demonstrates a marked clinical response of a deep and clinically extensive larval infestation of multiple cerebral locations to mainly conservative treatment. Although the majority of previously reported cases were treated using aggressive surgical management, a more conservative approach, especially in post-traumatic cases, may be adequate.

Role of Rituximab in miraculous cessation of ventricular tachycardia in Granulomatosis with polyangiitis: A case report