Caudal regression syndrome is a rare anomaly that is characterised by impaired development of the lower half of the body. This includes absent or abnormal development of lumbar and sacrococcygeal segments. Other associations of this disease include abnormalities of genitourinary tract, gastrointestinal tract, and cardiopulmonary system. The exact aetiology is unknown and is believed to be multifactorial but maternal diabetes is significantly linked to this rare disorder. We report the case of a new-born baby boy with caudal regression syndrome, hyperbilirubinaemia and patent ductus arteriosus.

Caudal Regression Syndrome or Sacral Agenesis is a rare birth defect that occurs in 1 to 2.5 per 100,000 normal pregnancies.1 It is a spectrum of disorders that may result in the mal-development of genitourinary and gastrointestinal systems along with the agenesis of lower spinal segments and abnormal development of lower limbs. In severe forms, there may be fusion of the lower limbs and significant neurological insult to the lower limbs, bladder and bowel. Abnormalities of cardiovascular system and pulmonary systems can also be seen. Maternal hyperglycaemia during pregnancy, vascular hypo perfusion and genetic predisposition have been identified as important risk factors.2 Sirenomelia, or Mermaid Syndrome, is the most severe form of this spectrum and is characterised by partial or complete fusion of the lower limbs. On the less severe end of the spectrum, there may be unilateral or bilateral sacral abnormalities or agenesis that may go unnoticed until childhood. Although maternal diabetes is an important risk factor, individuals with caudal regression syndrome can also be born to a non-diabetic mother.3 Affected individuals may have variable signs and symptoms depending upon the type and severity of this syndrome. Other visible characteristics include scoliosis, indentation on the skin of the lower back, clubbing of the feet, genital agenesis, and imperforate anus.

We present the case of a new-born boy born to a 25-year-old diabetic mother G2P0+1, seen in Sharif Medical City Hospital, Lahore, on February 17, 2020, with an APGAR score of 7/10 in one minute and 9/10 in five minutes. There was no history of antenatal infections and the mother had been taking oral antidiabetic drugs (Metformin) to control her blood glucose levels. The baby was delivered one week preterm with a weight of 2,400gm, length of 40cm and occipitofrontal circumference of 33cm. The delivery was spontaneous vaginal delivery and the baby cried within the first few seconds. He was born with cephalohaematoma, widely spaced nipples, slanting eyes, low set ears, curved spine and underdeveloped genitals and lower limbs (Figure-1). 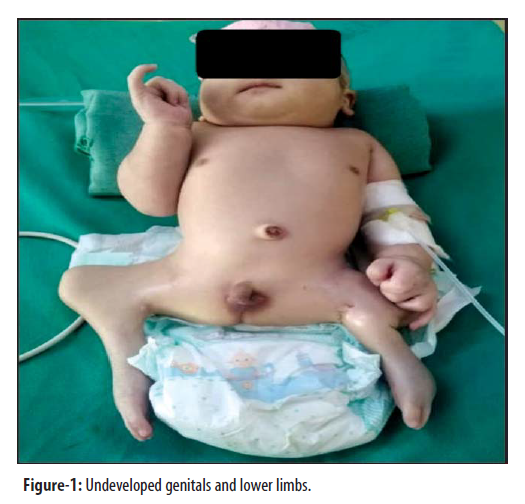 There was skin dimpling at the back in the thoracolumbar region with growth of hair around it (Figure-2). 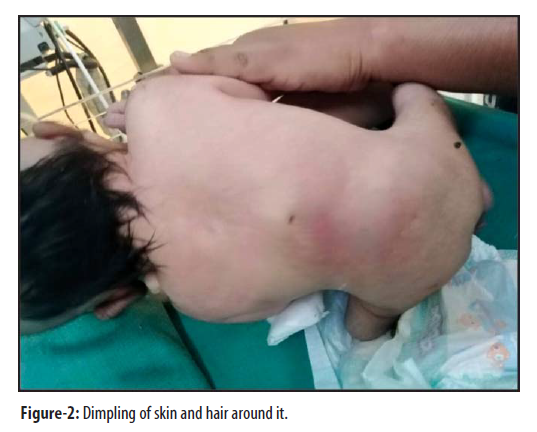 X-rays of the chest and lower limbs revealed fracture of left femur and sacral abnormalities (Figure-3). 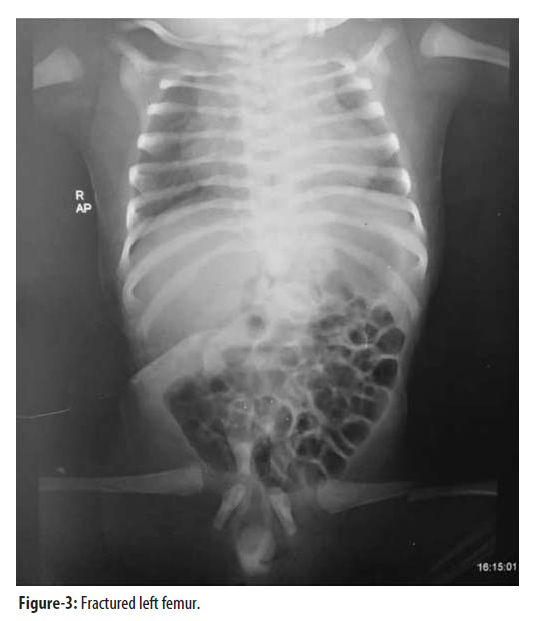 The baby was jaundiced with total bilirubin levels of 21.5mg/dl. His abdominal ultrasound was unremarkable. His external genitalia were also ambiguous and his scrotal sac was hypoplastic with no definite testes present in it. His arterial blood gasses were obtained which showed respiratory alkalosis. A continuous, machinery murmur could be heard throughout systole and diastole and echocardiography revealed large, partially restrictive patent ductus arteriosus. Oral feeds were not tolerated so nasogastric tube had to be inserted. Double phototherapy was started on the fourth day after birth and was continued for seven days with daily monitoring of serum total bilirubin levels until the levels became normal. During the hospital stay, consultations from orthopaedic department were sought and the baby had to be managed conservatively. Medications given during the hospital stay included antiplatelets (Prasugrel), loop diuretic (Furesemide), short-term sedatives (Debritone), H2 histamine receptor antagonist (Cimetidine) and sodium bicarbonate in 10% D/W. After nine days, the patient was discharged and the parents were counselled. The child was referred to the paediatric surgical unit of the Children's hospital to correct the cardiac anomaly and is being closely followed-up by the department of paediatrics in order to observe all the outcomes and co-morbidities of this condition. Informed consent was taken from the parents before reporting this case.

Caudal regression syndrome is a rare congenital anomaly that has a multifactorial aetiology. Abnormal development of mesoderm during gastrulation between the third and seventh week of embryonic life results in sacral dysgenesis.4 This abnormal development of mesoderm can be due to maternal hyperglycaemia, especially during the first few weeks of gestation5 or it can be the result of infection, ischaemia or exposure to any toxin before the fourth week of gestation.6 Drugs, such as Retinoic acid, have been significantly linked to the development of this syndrome in one study.7 Ischaemia could result from an abnormal artery that causes diversion of blood from the caudal aspect of the embryo which results in abnormal development of mesoderm.8 According to Renshaw Classification,9 caudal regression syndrome has been classified as: type 1, which is characterised by total or partial unilateral sacral agenesis; type 2, (the case reported here), with variable lumbar and total sacral agenesis and ilia articulating with sides of the lowest vertebra; type 3, with variable lumbar and total sacral agenesis; type 4, with partial fusion of soft tissues of both the lower limbs; and type 5, also known as Sirenomelia or Mermaid's syndrome, which is characterised by complete fusion of the lower limbs with single femur and tibia with additional abnormalities. It is the most severe form, however in some studies Sirenomelia, has been described as a separate entity.10 In addition to the abnormalities of the sacrum, lower limbs and spine, other abnormalities of genitourinary system such as anal atresia, renal agenesis, ectopic kidneys, fused ureters, neurogenic bladder and abnormal or undeveloped genitals can also be seen. Abnormalities of cardiopulmonary system include pulmonary hypertension, atrial and ventricular septal defects and patent ductus arteriosus. Orthopaedic anomalies include club feet, flexion contractures of hips and knees, kyphosis and scoliosis. It should be noted that the affected individuals may not have all of the symptoms and the symptoms vary from one affected child to another. Due to close resemblance and overlapping features, this syndrome can be misdiagnosed with VACTERL and Currarino syndromes. The treatment is mainly supportive and abnormalities of each system need to be corrected either surgically or conservatively. The abnormalities that require special attention are bladder and bowel incontinence, orthopaedic deformities and renal dysfunction.

As a preventive strategy, women with diabetes should have strict glycaemic control, especially during the first few weeks of pregnancy. Prenatal diagnosis via ultrasound and foetal MRI, and prompt treatment improves the prognosis. It should be noted that cognitive abilities, hearing and speech are normal and these individuals may lead an otherwise normal life if other disabilities are managed properly.

Conflict of Interest: There are no competing interests of any author.

Funding Disclosure: There was no source of funding except self-funding by the researchers.

Consent: Informed consent was taken from the child's parents for publishing the case.

Awareness about sexually transmitted diseases in women related to their age, education and income

Sibutramine and its cardiovascular effects: A deadly combination