Myeloid Sarcomas are rare tumours of myeloid origin that may infiltrate multiple sites of the body. They may precede acute myeloid leukaemia or present without it. It has non-specific manifestations and presents as a diagnostic and therapeutic challenge owing to the limited literature that reports consensus on diagnostic and treatment strategies. Immunohistochemistry is of significance in identifying the disease and acute myeloid leukaemia protocols of systemic therapy remain the mainstay of the treatment. Our report of an 11-year-old child with myeloid sarcoma aims to add to the limited existing literature and describe the varied presentation and sites of involvement.

Haematological malignancies can manifest as extramedullary soft tissue masses in relatively rare cases. Its rarity causes a diagnostic and therapeutic challenge.1 Myeloid Sarcoma (MS) is a rare tumour consisting of myeloid blasts at an extramedullary site.2 Immature cells belonging to the myeloid lineage disrupt the normal architecture of the tissue they invade.3 MS is usually reported with a concurrent diagnosis of acute myeloid leukaemia (AML). However, it may present alone without involving the bone marrow and peripheral blood, following myeloid malignancies, and as a relapse of AML.2,3 MS can occur at any site and the clinical picture varies according to the site of involvement.4

Here we present an 11 year old male who presented to us with bilateral knee pain, fever, and multiple swellings involving tissues of the face, hand, and legs. Upon investigation including imaging and immunohistochemistry a diagnosis of MS with concurrent AML was made.

An 11-year-old male presented to the National Institute of Child Health, Karachi in October 2017 with complaints of gradually enlarging multiple swellings at various sites on his body and bilateral knee joint pain for the last two months, and fever for the last one month. Otherwise, his medical, surgical, developmental and family history was unremarkable.

On examination, we found a pale malnourished child with normal vital signs, oriented to time, place, and person. His weight (20 kg) and height (127 cm) were below third percentile for his age. His few cervical lymph nodes were palpable bilaterally, measuring approximately 1x1 cm. Multiple soft non-tender swellings were present on his body, on his left forehead involving the left periorbital region, right parotid region, left wrist, dorsum of left hand, left middle finger, and bilateral knees with visible veins and normal overlying skin except on the forehead lesion, where overlying skin was ulcerated.

Complete blood count was normal with peripheral smear showing 3% metamyelocytes and 5% myelocytes; however, no blast cells were visualised. Serum electrolytes, blood urea nitrogen and, creatinine were normal, with raised uric acid levels. Imaging of the skull and knees was normal, however, destructive lesions of distal shaft of left radius, left fifth metacarpal, and left third phalanges were visualised. Skeletal scintigraphy revealed soft tissue swelling involving the forehead with no underlying bone involvement. Increased uptake was seen over the left metacarpals. Ultrasound of the neck showed normal thyroid and cervical lymphadenopathy of 1.2x1.2 cm. Ultrasound of the abdomen revealed splenomegaly (12 cm) with no focal mass or infiltration.

Biopsy of the forehead lesion revealed medium-sized cells in an alveolar pattern with moderate eosinophilic cytoplasm and round nuclei. Periodic Acid Schiff stain was negative. Immunohistochemical stains CD2 and CD3 showed reactive patterns, whereas Cytokeratin AE1/AE3, Myogenin, and S-100 were negative. Dense acute and chronic inflammation was reported by the pathologist, with marked fixation artefacts. A repeat biopsy was advised. 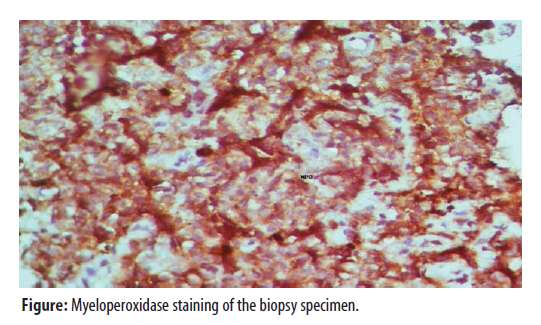 The lesion was identified as a myeloid sarcoma.

Our workup supported the diagnosis of myeloid sarcoma with acute myeloid leukaemia (AML). Cytogenetic analysis could not be performed due to unavailability of such a facility at that time.

Echocardiography revealed an ejection fraction of 68%, with no significant cardiac abnormality. AML treatment protocol with induction chemotherapy consisting of Daunorubicin and Cytarabine (DA 3+10) along with supportive treatment was initiated. A week after the treatment, the patient showed signs of improvement with reduction in the size of tumour masses. Counselling for bone marrow transplantation was done. However, the patient relapsed during consolidation chemotherapy. Consent was obtained from the patients' parents for publishing this report along with images prior to writing of this manuscript.

Myeloid Sarcoma is defined as a tumour comprising myeloid blasts with or without maturation at any site other than the bone marrow.4 MS may develop in multiple scenarios including MS with simultaneous acute myeloid leukaemia, isolated MS without blood and marrow involvement, as relapse of AML, and following myeloid malignancies such as myeloproliferative disorders and myelodysplastic syndrome.2 MS is a rare disease and its identification without prior leukaemic picture is challenging.5

The tumour mass can infiltrate any anatomic site except the bone marrow. The most common sites are bone, skin, orbit, reproductive organs, central nervous system, lymph nodes, and the gastrointestinal tract.3,6 Skin and the orbit are the most reported involved sites in paediatric MS patients.6 The precise mechanism of involvement of extramedullary tissue in MS is not completely understood; however, some studies have reported the role of cytokine receptors and adhesion molecules, particularly CD56, in controlling the invasion of cancerous cells in certain tissues.1,7

Clinical presentation is non-specific and dependent upon the tumour site. Symptoms usually include local pain and manifestations due to mass effect of the tumour or local organ dysfunction.4,7 In AML, MS may be the first manifestation of AML that may precede the clinical disease, as in our case where typical findings of acute leukaemia were absent and complete blood count, peripheral smear, and bone marrow aspirate results were also unremarkable.1 Because MS can involve multiple sites, imaging is useful to evaluate the extent of involvement.8 MS appears commonly as a soft tissue mass. Computed tomography (CT) and MRI can be used to visualize the lesion, but MRI is preferred in spinal or CNS involvement. Imaging can exclude haematomas and abscesses.1,4

Lack of randomised controlled trials has limited the consensus for a treatment strategy; however, the mainstay of treatment remains AML protocols using systemic chemotherapy. Local treatments such as surgery and radiotherapy could be utilised as clinically indicated; however, both are considered ineffective without concurrent systemic therapy.1,4 The role of haematopoietic stem cell transplantation has been studied in retrospective studies, and has shown encouraging results.4 In low income countries, due to unavailability of standard diagnostic and treatment facilities, management of such diseases is restricted to available options that may not be enough. Many newer medications are not available in the country or are very expensive for the ordinary citizen. In such a scenario, with the help of public-private partnerships, availability of better diagnostic and treatment facilities can be offered to the patients. It is important to give whatever best possible treatment is available in the country, offer palliative care to improve the quality of life, and to develop global partnerships for compassionate care medication enrolment.

Myeloid Sarcoma is a rare extramedullary tumour of myeloid origin that can involve any site in the body and can, therefore, present with nonspecific manifestations. Its diagnosis without existing presentation of haematological malignancies remains a challenge. Immunohistochemistry plays a significant role in the diagnosis of MS. Understanding of myeloid sarcoma is vital, as detection may lead to timely treatment and improved prognosis.