Cardiac amyloidosis is a rare disease which is under diagnosed in this region. This study was aimed to assess the clinical presentation, cardiac magnetic resonance (CMR) imaging findings and prognosis of patients with cardiac amyloidosis in Pakistani population presenting to a tertiary care setting. A total of eight patients were included with the confirmed diagnosis of cardiac amyloidosis on CMR, after reviewing the CMR data of Aga Khan University Hospital from January 2011 to August 2019. Mean age was 51±11.5 years with the majority (75%) being male. All patients presented with heart failure. Suboptimal myocardial nulling on late gadolinium images was the most common finding on CMR. Late gadolinium enhancement was diffuse transmural in 5 patients (62.5%) and diffuse sub-endocardial in 3 patients (37.5%). On a mean follow up of 14±10 months, 3 patients (37.5%) died while 7 patients (87.5%) had hospital admissions due to heart failure.

Identification of cardiac amyloidosis and its various types remains a challenge and the condition may be vastly underdiagnosed.1

Clinically amyloid proteins deposition in the heart leads to impaired diastolic function and may manifest commonly as heart failure. Although the gold standard diagnostic method for cardiac amyloidosis remains cardiac biopsy, various other diagnostic modalities are used for the diagnosis which include ECG, echocardiogram and cardiac magnetic resonance imaging (CMR).

Out of these, CMR is an excellent and extremely useful imaging technique and has been widely accepted. CMR diagnosis of cardiac amyloidosis is centered on the variance in gadolinium uptake of normal and diseased myocardium.4,5

No data is available on this rare disease from Pakistan. This study is aimed to look at the clinical presentation, cardiac magnetic resonance imaging findings and prognosis of patients with cardiac amyloidosis in the Pakistani population presenting to a tertiary care setting. The study will facilitate the conception of a framework for further workup on this disease in the country.

This study was approved by hospital ethical review committee (ERC No. 2019-1987-5079). We retrospectively reviewed Cardiac magnetic resonance (CMR) imaging data of AKUH from January 2011 to August 2019 and patients having the diagnosis of cardiac amyloidosis on CMR were included in the study. A pre designed data collection form was filled for each patient, after reviewing the medical records.

Data was analyzed using SPSS version 19. CMR was performed on a 1.5-Tesla Siemens Avanto. Images were interpreted by a trained cardiologist with experience in CMR.

A total of 8 patients who had diagnosis of cardiac amyloidosis on CMR were included in the study. Mean age of the patients was 51±11.5 years with the majority (n= 6, 75%) being male. Hypertension was present in 3 (37.5%) patients, while none had diabetes, chronic kidney disease or blood dyscrasia. 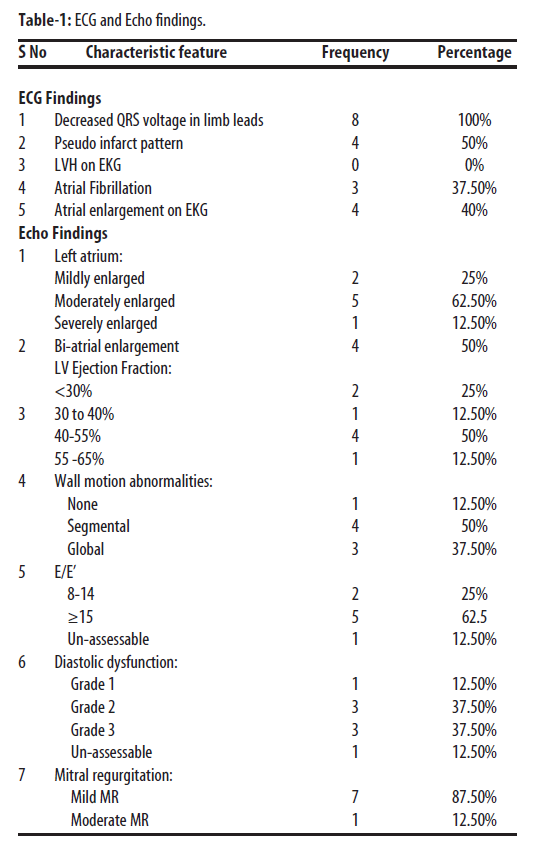 Table-1 shows ECG and Echo findings in the study patients. On ECG, QRS voltage was decreased in limb leads in all patients (n = 8,100%), while 3 (37.5%) patients had atrial fibrillation.

Prior echocardiogram was suggestive of cardiac amyloidosis or restrictive cardiomyopathy in 7 (87.5%) patients. 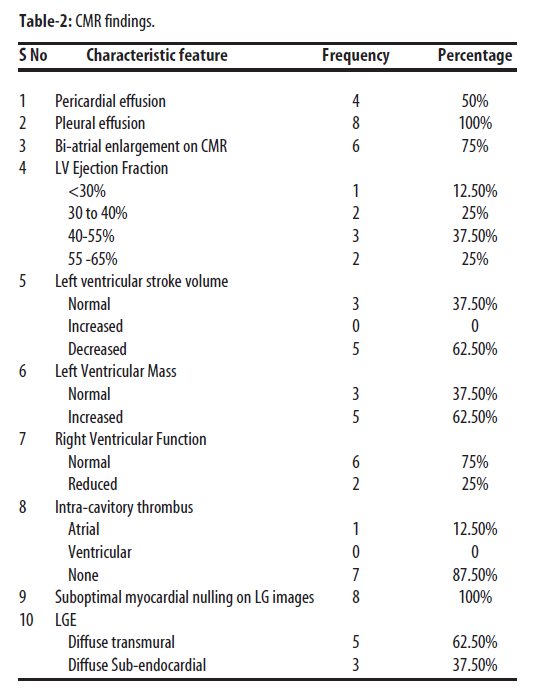 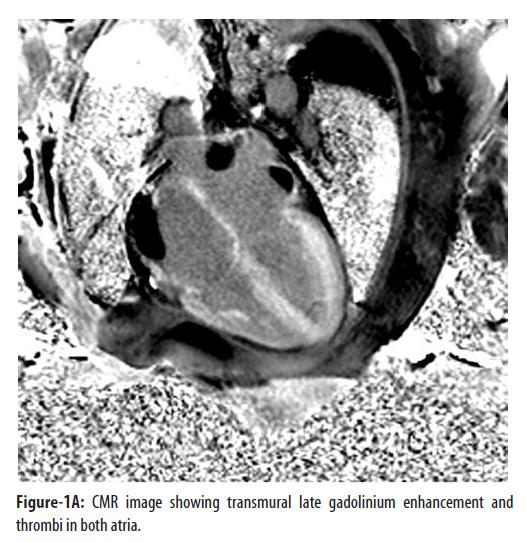 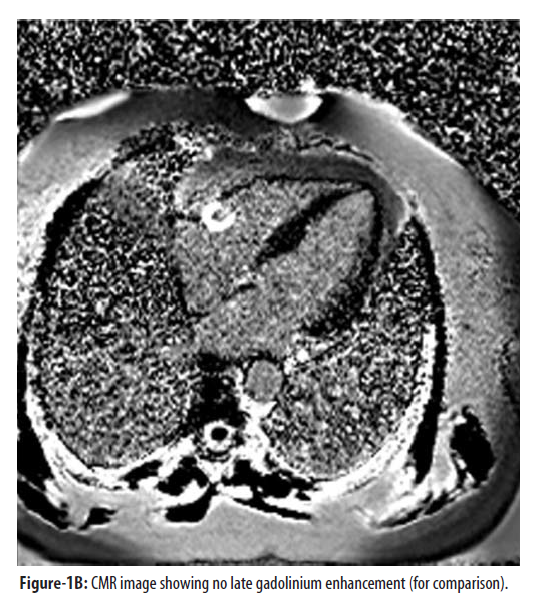 Inter-atrial septum was thickened in the majority of the patients (Figure-1C). 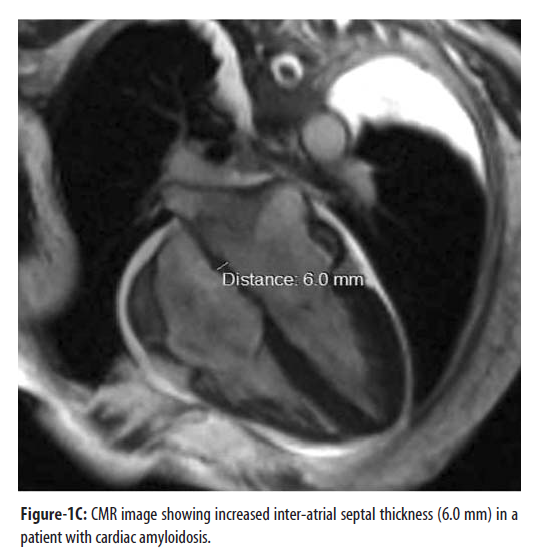 Although this is a small study but it is the only data available on cardiac amyloidosis from this region. The number is small as cardiac amyloidosis is a rare disease but the small number is also due to less awareness on about the disease and the lack of knowledge about the correct diagnostic procedures, in the region. This can be a cause for under diagnosis of the condition in the region.

In amyloidosis, cardiac injury occurs due to the widespread interstitial deposition of proteinaceous material throughout the myocardium that causes pressure atrophy of adjacent myocardial fibers. Overtime, these changes result in ventricular and atrial wall thickening and reduced ventricular wall compliance, impairment of diastolic filling and eventual diastolic heart failure.6 All of the patients in our study presented with heart failure.

In compliance with the usual gender distribution, most (75%) of our patients were men.7 However, the average age at diagnosis in our studied population was less as compared to prior reports (51±11.5 years vs. 58±11 years).8

Echocardiography is a simple non-invasive technique for the morphological study and evaluation of myocardial function. However these indicators are not specific of cardiac amyloidosis. In the majority of our patients prior echocardiogram was suggestive of cardiac amyloidosis or restrictive cardiomyopathy. Reduced LVEF on echocardiogram in the majority of patients in this series is probably due to diagnosis at a late stage, which is the usual case in our population. This highlights the importance of early diagnosis with the help of proper imaging modalities.

In addition, in this part of the world where resources and expertise are limited and patients usually don't allow biopsy, the importance of a non-invasive imaging modality like CMR is further enhanced in the diagnosis of cardiac amyloidosis.

CMR offers an excellent non-invasive modality for assessment of cardiac structure and function. Among patients with cardiac amyloidosis the severity of cardiac dysfunction is closely associated with morbidity and mortality as evident by prior studies.9 This trend was also seen in our study as patients who died during follow up had significant cardiac dysfunction.

CMR also delivers the evidence of extracellular deposition of amyloid in cardiac muscle through late gadolinium enhancement (LGE). The delayed enhancement imaging sequence depends on the selection of an appropriate inversion time to null the signal from normal myocardium. Sub optimal myocardial nulling on CMR was present in all of our patients. In each of our patients, the entire myocardium was enhanced to some extent. Therefore, even with the correct inversion time selected, suppression of signal from normal myocardium could not be achieved. This finding may be initially misinterpreted as a technical issue, preventing recognition of the diffuse disease process. Amyloidosis should be considered whenever there is difficulty in suppressing signals from the myocardium on delayed enhancement images with standard inversion times.

Diffuse transmural enhancement on late gadolinium images was more common in this study population, which is suggestive of more prevalence of ATTR wild type amyloid10 in this region.

The limitation of this study is the small sample size but considering the rarity of cardiac amyloidosis, this small number is acceptable for a case series. In addition, tissue biopsy for the diagnosis was done in only few patients, which is due to both less availability of biopsy facility as well as less willingness of patients for the invasive procedure in this part of the world. Non-availability of histology is a major limitation of the study. However, now sufficient data is available in the literature on CMR findings in cardiac amyloidosis and one can confirm the diagnosis of cardiac amyloidosis on the basis of CMR findings, even without biopsy. Moreover, endomyocardial biopsy is an invasive procedure with associated risk of complications.

All patients in this case series presented with heart failure and low voltage ECG. Majority of our patients had bi-atrial enlargement. Sub optimal myocardial nulling and diffuse transmural enhancement on late gadolinium images are the more common findings on CMR in our study population. Our patients showed a poor prognosis, with a mortality of 37.5% during a mean follow up of 14 months.

Disclaimer: This study was not presented in any conference and was not published in any journal before.

Conflict of Interest: Authors have no conflict of interest.

Funding Disclosure: No funding was received for this study, from any source.