The Economic and Social Commission for Asia and the Pacific is the regional developmental arm of the United Nations. There are over 650 million persons with disabilities living in the region. In 2012, member countries, including Pakistan, launched the new decade of persons with disabilities from 2013 to 2022, adopting the Incheon Strategy to 'Make the Right Real', based on the Put Convention on the rights of Persons with Disabilities" and aimed at accelerating the disability inclusive development with 10 measurable goals and targets. The year 2017 marked the mid-point of that decade at which point member countries were to submit the Government Members Report on the Implementation of Incheon Strategy. The ambiguity in usage of terms, variable definition of disability, and use of impairment screens in population census of Pakistan has resulted in flawed data and underreporting of persons with disabilities. Pakistan provided data on only 13 of the 30 core indicators as part of its midpoint review. There is lack of awareness among ministries regarding the Incheon Strategy implementation.

The Economic and Social Commission for Asia and the Pacific (ESCAP) is the regional developmental arm of The United Nations (UN) consisting of 53 member and 9 associate member countries, including Pakistan. According to ESCAP, there are over 650 million persons with disabilities (PWDs) living in Asia and Pacific, and from October 29 to November 2, 2012, the members of the ESCAP gathered in Incheon, South Korea, launching the new decade of PWDs, from 2013 to 2022, and adopting the Incheon Strategy to 'Make the Right Real' for PWDs, comprising 10 goals, 27 targets and 62 indicators. The Incheon strategy is based on the Convention on the rights of Persons with Disabilities (CRPD), which is the first international disability-specific legal treaty, intended to protect and fulfil the rights of PWDs. Hence, the Incheon strategy aims at accelerating the disability inclusive development with measurable time-bound goals and targets.1 It is imperative to point out that 2017 marked the mid-point of the decade. It was deemed mandatory for all member states to make the baseline data on strategy indicators available, by 2017, which was crucial to aid in tracking the progress towards the achievement of the set goals and targets. A high-level intergovernmental meeting was held to review the progress, but unfortunately the Government Members Report on the Implementation of Incheon Strategy submitted to UN-ESCAP by Pakistan was unsatisfactory and lacked data relevant to the 10 goals of the strategy and their implementation.2

It is anticipated that information of the progress will help in raising awareness regarding this issue and make data available to the general population and the authorities concerned so that relevant actions can be taken to achieve the goals of the Incheon strategy till 2022. The current study was planned to review and report the existing literature and evidence on the availability of data regarding the goals of Incheon strategy in the context of Pakistan.

A literature search was conducted regarding the goals of the Incheon strategy in the context of Pakistan, using numerous key words specific to every individual goal. The search was conducted in 3 phases over a period of 4 months, from November 2018 to February 2019, with specific focus on evaluating the steps taken for the implementation of Incheon strategy and areas deficient in its execution. An online literature search was conducted using electronic search engines, including PubMed, Elton B. Stephens Company (EBSCO) database EBSCOhost, Scopus, Google Scholar and Pakmedinet. Data published from 2012 onwards was retrieved, but in the absence of any relevant data, previously published data was also considered. The second phase of literature search consisted of retrieving the relevant data from newspapers and governmental and international organisations' websites. The third phase comprised searching from the relevant sources and bibliography of the relevant literature. The searched literature was reviewed by authors independently and conclusions were deduced collectively.

Goal 2: Promote participation in political processes and in decision-making. 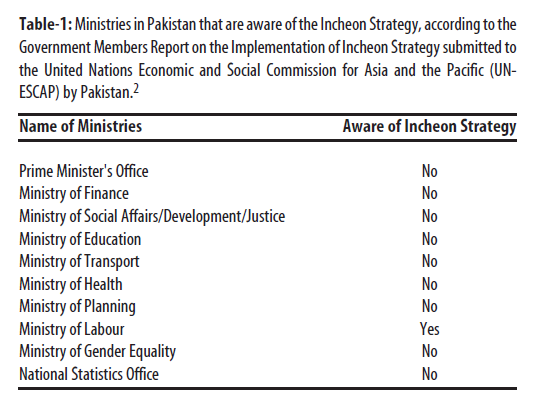 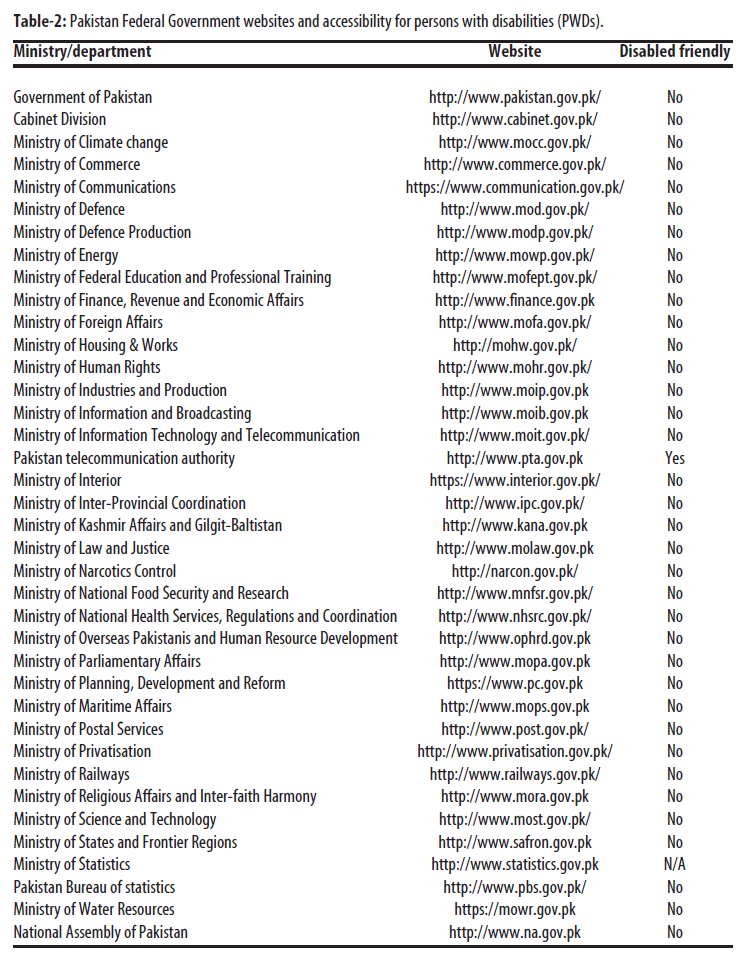 Goal 5: Expand early intervention and education of children with disabilities.

Goals 9 & 10: Accelerate the ratification and implementation of CRPD and the harmonisation of national legislation with the Convention and advance sub-regional, regional and interregional cooperation.

Factors like ambiguity in usage of terms, variable definition of disability, and the use of Impairment Screens in population census have resulted in flawed data and underreporting of PWDs, which eventually leads to lack of emphasis and poor policy-making related to the subject of PWDs. Pakistan only provided data on 13 out of the 30 core indicators for ESCAP midpoint review in 2017. There is lack of awareness among the relevant federal ministries regarding the Incheon strategy and its implementation.

2.      United Nations (UN) EASCFAPE. Government members' reports on the Implementation of the Incheon Strategy to Make the Right Real for Persons with Disabilities. [Online] [Cited 2015 January 15]. Available from: URL: https://www.unescap.org/resources/government-members-reports-implementation-incheon-strategy-make-right-real-persons.

9.      Ali B. Political inclusion of people with disabilities in Khyber Pakhtunkhwa province of Pakistan. Peshawar: University of Agriculture Peshawar, 2018.

19.    UNESCAP. Incheon Strategy to “Make the Right Real” for Persons with Disabilities in Asia and the Pacific.[Online] [Cited 2019 March 14]. Available from: URL: https://www.unescap.org/resources/incheon-strategy-make-right-real-persons-disabilities-asia-and-pacific-and-beijing

38.    Akbar RM. A survey of special education facilites for the handicapped children in Pakistan: AIOU; 1989.

41.    Tefera B, Van Engen ML, Schippers A, Eide AH, Kersten A, van der Klink JJ. Education, work, and motherhood in low and middle income countries: a review of equality challenges and opportunities for women with disabilities. 2018.

57.    Unit TEI. Moving from the Margins Mainstreaming persons with disabilities in Pakistan. 2014.