Objective: To determine the region which should be taken as a standard of measurement for varicocele veins.

Methods: The cross-sectional study was conducted at the Fatima Memorial Hospital, Lahore, Pakistan, from October 2018 to October 2019, and comprised patients aged 20-45 years diagnosed with left-sided varicocele and infertility having varicocele vein diameter >2.5mm on scrotal colour Doppler ultrasound. The parameters were determined at subinguinal and peritesticular region in the patients. Data was anaylsed using SPSS 23.

Results: There were 35 male patients with a mean age of 32.83±5.91 years. In both supine and standing positions, the mean diameters of varicocele vein at the peritesticular region were significantly greater than the mean values at the subinguinal region (p<0.01). All the 35(100%) patients had semen abnormalities, but the diameter of varicocele veins had no significant correlation with such abnormalities (p>0.05).

Conclusion: Varicocele vein diameter at the peritesticular region was found to be significantly greater than the subinguinal diameter in both lying and standing position.

Varicocele is defined as dilated veins of pampiniform plexus, having retrograde blood flow, clinically evident on palpation of the spermatic cord.1,2 It exists in 9-23% of the general population, but is found in 40% infertile men, and is considered the most treatable factor of male infertility.2 Due to anatomic differences of the internal spermatic veins, it is more common on the left side.3 Large and moderate varicoceles are easy to identify clinically, but mild varicoceles need careful clinical examination.4 Therefore, the role of scrotal colour Doppler ultrasonography (CDUS) is essential for the interpretation of an indecisive physical scrotal examination.5 The sensitivity and specificity of CDUS in the diagnosis of varicocele has been reported to be 97% and 94% respectively.6 The cut-off value for varicocele vein is >2.5mm to be clinically significant on scrotal CDUS.7 It is not clear whether this measurement should be routinely done at the subinguinal region or the peritesticular region.

The current study was planned to find out the region where the diameter of the varicocele vein is larger.

The cross-sectional study was conducted at the Fatima Memorial Hospital, Lahore, Pakistan, from October 2018 to October 2019. After approval from the institutional ethics review board, the study was conducted assuming the appropriateness of the sample size. The sample was raised using consecutive sampling technique from among patients aged 20-45 years diagnosed with left-sided varicocele grade 2 or 3 and infertility having varicocele vein diameter >2.5mm on scrotal CDUS.7,8 Patients were excluded if they had any chronic illness, like diabetes, hypertension, hepatitis B or C, or any history of chemotherapy or radiation, and patients with recurrent varicocele, bilateral varicocele and those with hypogonadotropic hypogonadism. Patient having had previous inguinoscrotal surgery were also excluded.

Scrotal CDUS was performed at the site specifically for the study, as such those patients could not be included who had undergone scrotal CDUS from other diagnostic centres. Furthermore, patients having semen parameters from any other lab that did not have the relevant parameters of semen quality were also excluded.

After taking informed consent, clinical history was obtained from the patients and they were subjected to physical examination. The varicocele grade was recorded by a consultant urologist.7,8 Semen samples were collected after a minimum 3-4 days of abstinence and were processed for the determination of semen quality, including semen volume, appearance, sperm count, motility, morphology and other microscopic details.9

CDUS machine (Voluson General Electronics 30, USA) having a 10 mHz linear probe, observing standard protocols, was used in all patients by a single radiologist.10 Testicular dimensions of length, width and height were measured and they were used to calculate the testicular volume.11 Peak systolic velocities (PSV) and resistive indices (RI) of the sub-capsular branch and intra-parenchymal branch of testicular artery of left and right testes were determined. The diameters of varicocele veins were noted in both supine and standing position. 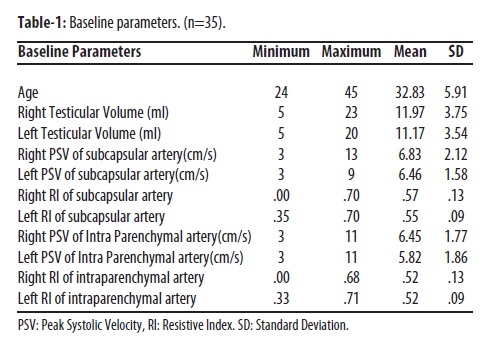 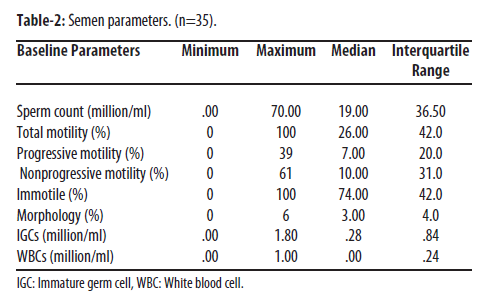 All the 35(100%) patients had semen abnormalities, but the diameter of varicocele veins had no significant correlation with such abnormalities (p>0.05).

In both supine and standing positions, the mean diameters of varicocele vein at the peritesticular region were significantly greater than the mean values at the subinguinal region (p<0.01) (Table-3).

Varicocele is the most treatable cause of male infertility and the surgical correction of varicocele improves the quality of semen parameters in around 60-80% of the patients.12 Hence, it is important for initial assessment of infertility patients to assessment and detect the disease correctly and timely. The initial assessment of varicocele is done by physical examination, but it can only detect up to 40% of the cases and small varicoceles are missed.13 A study tried to establish a new criterion for CDUS diagnosis of varicocele, but it did not provide any new information on the diagnosis of subclinical varicocele in infertile patients.14 Testicular venography was considered to be the most reliable method for detecting small varicoceles, but due to various disadvantages, such as invasiveness, morbidity in 0.5-1% patients due to contrast medium, and high cost of the procedure, it is now mostly used in embolisation procedures.15

CDUS of the scrotal region can be done in both supine and standing position. Different regions of the spermatic vein can be investigated to diagnose varicocele, but it is not clearly determined as to which position and region of the spermatic vein can provide the most precise evaluation of varicocele. Interestingly, the current found the difference in the diameter of the varicocele veins in these patients at subinguinal and peritesticular level in both supine and standing positions.

A recent study concluded that CDUS of testicular vein in upright position in the region of the epididymal head during the Valsalva manoeuvre was the most suitable position to diagnose varicocele as it had a high sensitivity and specificity.16 Another study also concluded that clinical varicoceles can be predicted on the basis of the testicular vein diameter >2.45mm at rest and >2.95mm while doing the manoeuvre; the whole diagnostic procedure was done in supine position and the diameter of the largest vein in the pampiniform plexus was studied and recorded.17 One study suggested that varicocele vein diameter of 3.1mm was the optimal cut-off to predict varicocele with a low sensitivity of 58.2% and a specificity of 84%.18

Although all varicocele patients had associated semen abnormalities, the varicocele vein diameters had no specific impact on these abnormalities. Earlier studies have also not found any significant correlation between the varicocele vein diameters and semen parameters in both subinguinal and peritesticular regions in varicocele patients although a significant negative correlation between testicular blood flow and progressive motility of the sperms was noted in one study.19,20

The limitation of the current study is its small sample size which was due to a stringent inclusion criterion. Patients whose semen analysis processing and reporting was not done according to the World Health Organisation (WHO) criteria were also excluded.9

Besides, clinical examination appeared to be better than CDUS, but this was due to the selection bias in the current study which included only palpable varicoceles. Further studies are required to confirm the findings of the current study.

Disclaimer: The text was partially presented at the 3rd Andrology Symposium in Zagreb, Croatia, that was organised by the European Academy of Andrology on June 6, 2019.

7.      Hussein AF.  The role of color Doppler ultrasound in prediction of the outcome of microsurgical subinguinal varicocelectomy.J Urol. 176:2141-5.

11.    Sotos JF, Tokar NJ. A medical calculator to determine testicular volumes matching ultrasound values from the width of the testis obtained in the scrotum with a centimeter ruler. Int J Pediatr Endocrinol. 2017; 2017:14.

18.    Bakirtas H, Cakan M, Tuygun C, Soylu SO, Ersoy H. Is there any additional benefit of venous diameter and retrograde flow volume as measured by ultrasonography to the diagnosis of suspected low-grade varicoceles? Urol Int. 82:453-8.