Objective: To assess the nutritional status of patients on maintenance haemodialysis to determine the frequency and severity of malnutrition.

Methods: The cross-sectional study was conducted in November 2020, at the The Kidney Centre Post-Graduate Training Institute, Karachi, and comprised secondary data related to patients on maintenance haemodialysis which was collected from January to August 2016. A one-time subjective global assessment score was calculated based on the history and physical examinations. Data was analysed using SPSS 17.

Conclusion: Malnutrition was found to be quite common in haemodialysis patients, which necessitates its regular assessment and monitoring.

Chronic kidney disease (CKD) is a global health concern and progression to end-stage renal disease (ESRD) has alarming effect on morbidity and mortality, and greatly increases the individual's economic burden.1 A 20-25% annual mortality rate was reported in adult ESRD patients on haemodialysis (HD) in the United States Renal Data System (USRDS) 2018 report.2 The main reason for increase in mortality in the HD population is related to cardiovascular events,3 but increased mortality is also associated with malnutrition.4 According to some reports, malnutrition affects 20-70% of dialysis patients and it increases with duration on dialysis; 5-10% of these having protein-energy malnutrition.5

Nutritional status can be assessed through different methods, including clinical presentation, anthropometric measures, such as body mass index (BMI), mid-arm circumference, and through biochemical parameters.8,9 These methods have to be used in conjunction, are time-consuming and complex. A modified subjective global assessment (SGA) score is a convenient, inexpensive and practical method to assess nutritional status. It is a reliable and rapid screening tool that has been validated and used in multiple settings to evaluate the nutritional status10,11 National Kidney Foundation/Kidney Disease Outcome and Quality Initiative (NKF/KDOQI) recommends using SGA for periodic nutritional status assessment.12

Despite being an important predictor of morbidity and mortality, routine screening for malnutrition in dialysis patients is not a common practice in developing countries, like Pakistan. There is possibility of more prevalent malnutrition in the dialysis population in these resource-limited countries because of poor calorie and protein intake. The current study was planned to assess the nutritional status of patients on MHD to determine the frequency and severity of malnutrition.

The observational, cross-sectional study was conducted in November 2020 at the Department of Nephrology, The Kidney Centre Postgraduate Training Institute (TKC-PGTI), Karachi, and comprised re-analysis of secondary data that was collected using non-probability consecutive sampling technique from January to August 2016 after taking informed consent from the subjects and approval from the institutional ethics review committee (ERC). For the current study exemption was obtained from the institutional ethics review committee as it involved no further interaction with the patients.

TKC-PGTI is a tertiary level renal care facility with a dialysis unit that accommodates 66 patients at a time and performs 82,500 dialysis sessions annually, following standards defined by the European best practice guidelines.13 All long-term MHD patients are dialysed for four hours three times a week.

The original data related to patients of either gender aged >18 years undergoing MHD for >6 months. Patients with malignancy, sepsis, shock, tuberculosis (TB), liver cirrhosis, alcohol consumption and gastrointestinal (GI) diseases that cause mal-absorption and lead to malnutrition were excluded. Data of patients who were non-compliant to dialysis therapy or not receiving prescribed dialysis dose was also excluded.

A one-time SGA score was calculated based on the history and physical examinations, using fully quantitative version of the SGA, also known as modified SGA, or dialysis malnutrition score (DMS).14 Five scale parameters were used, and the values were summed up. A value of 7 was taken as normal, and 35 as severe malnutrition. Patients were then categorised according to SGA scores as, well-nourished grade A, score 7-10, mild-moderately malnourished grade B, score 11-22, and severely malnourished grade C, score 23-35.

Data was analysed using SPSS 17. Mean ± standard deviation (SD) was calculated for continuous variables in case of normally distributed data, while median with interquartile range (IQR) was used for skewed variables. Shapiro Wilk test was performed to check data normality. Categorical data was expressed as frequencies with percentages. Chi-square test was applied to find any association between categorical variables, while effect of different parameters on nourishment score (odds ratios) was determined through univariate logistic regression analysis. Variables with p=0.25 in univariate analysis were kept in multivariate model of logistic regression analysis in which p<0.05 was considered statistically significant. 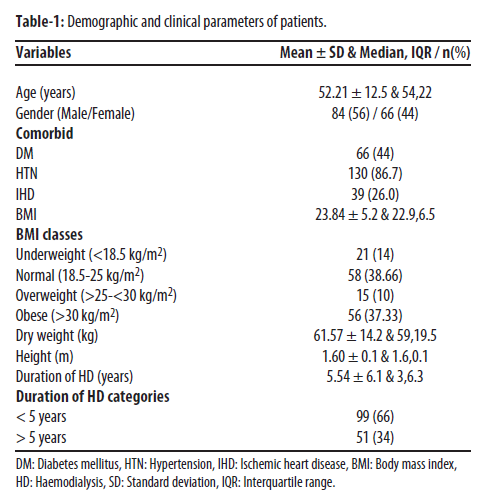 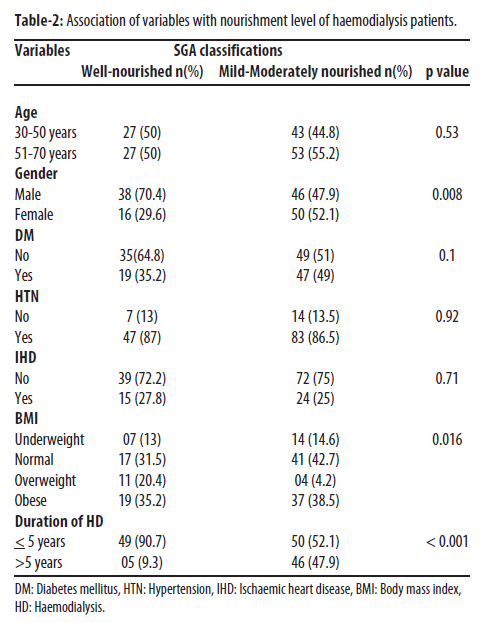 Logistic regression showed that females were 2.6 times more likely to be malnourished (p=0.009), and HD duration >5 years increased the risk of malnourishment by 12.5 times (p<0.001), while overweight patients had significantly less chance of being malnourished (p=0.004) (Table-3).

Malnutrition is a common and frequently overlooked problem in patients on HD.15 It not only affects QOL, but also increases the risk of morbidity and mortality.15 NKF/KDOQI recommends assessing nutritional status of patients undergoing MHD by using SGA at least every six months.12

The current study aimed at determining nutritional status of HD patients in Pakistan. The results showed that 36% patients were well-nourished whereas 64% were mild-moderately malnourished and none was found to have severe malnutrition. Various studies from South Asia and Middle East have used SGA to assess nutritional status of HD patients. Taipawala et al. reported malnourishment in 58% HD patients in India.16 In Nepal, Khadka R et al.17 and Sedhain A et al.18 demonstrated 52.78% and 66.7% mild to moderate malnutrition in ESRD population respectively. Similar to the current study, severe malnutrition was not seen in either of these two studies. Prevalence of malnutrition in Saudi Arabia,19 Jordan,20 Iraq21 and Palestine4 were 55%, 62%, 63.5% and 47.2% respectively. Although more or less similar percentage of malnutrition was found in studies from South Asian and Middle East countries, a study from Iran6 reported considerably lower rate of malnutrition. Out of 239 patients assessed for nutritional status, 18.8% had mild to moderate malnutrition and 10.9% had severe malnutrition. Similarly, studies from Brazil ad Netherlands have shown much lower prevalence at 22.40%22 and 23% respectively.23 This variation in prevalence of malnutrition could be attributed to demographic and cultural differences among these regions as well as different diets, economic conditions and treatment methods.

Malnutrition in HD patients is multifactorial, involving poor dietary intake due to anorexia and nausea, increased protein catabolism, decrease nutrient utilisation, metabolic acidosis, chronic inflammation, altered hormonal and metabolic function, inter-current illness, and imposed restrictions on diet. Treatment-related factors, such as inadequate dialysis, dialysis vintage and nutrients lost during dialysis, are also considered possible influencing factors.22 However, in the current study, all the participants were on adequate dialysis regimen with three HD sessions per week. A study16 showed comparable prevalence of malnutrition in patients with chronic renal insufficiency (CRI), ESRD patients on HD and ESRD patients on continuous ambulatory peritoneal dialysis (CAPD), which may point toward non-dialysis-related factors being the major contributors to malnutrition in these patients, and many patients are already malnourished at the time of HD commencement.

On the other hand, in the current study, a significant correlation was observed between duration of dialysis and malnutrition. This was similar to observation made earlier.22,24 A plausible explanation for this observation could be that HD itself is a catabolic state, and the fact that nutrients are lost during dialysis sessions. If not adequately replenished, it can result in weight-loss and malnutrition.

Rezeq et al. reported a univariate association of comorbid conditions, in particular diabetes mellitus (DM) and hypertension (HTN) with malnutrition.4 In the current study, no significant correlation was found between nutritional status and comorbid conditions, including HTN, DM and Ischaemic heart disease (IHD).

Several studies have reported a significant association between BMI and nutritional status and have acknowledged BMI as a leading predictive factor for malnutrition,6,15,22 In our study, 14% patients had BMI <18kg/m2, 38.6% had normal BMI, and 47.3% had above-normal BMI. Underweight patients were not found to have significant malnutrition than patients with normal BMI, whereas patients who were overweight had 85% less chance of being malnourished compared to patients with normal weight (p=0.004) and this effect further increased to 87.3% less chance of malnutrition when BMI was adjusted with other variables (p=0.011). These findings do not suggest any linear association between BMI and nutritional status by SGA scale in the current study which can be explained by the fact that many dialysis patients are at normal weight to start with, but later may lose weight. This may be missed by one-time anthropometric measurement, but can be picked on SGA score, reinforcing the power of SGA score in the assessment of nutritional status in MHD patients among different methods of assessment.

The current study has limitations. It was a single-centre study with a small sample size and in urban environment. As such, the results might not be generalisable to the national population. Inflammatory and biochemical markers were not assessed, and, hence, the degree of systemic inflammation could not be quantified. Despite the limitations, however, the study can serve as the baseline for future large-scale, multi-centre prospective evaluation of nutritional status of patients on MHD that may facilitate in making recommendations for the prevention and treatment of malnutrition in the population.

High prevalence of malnutrition in HD patients necessitates regular assessment and monitoring of nutritional status as well as provision of comprehensive dietary consultation. SGA can serve as a simple, inexpensive and reliable tool for the early detection of malnutrition, particularly in resource-limited setting and may thus help in timely treatment, and reduction of morbidity and mortality.