Breast conservation surgery (BCS) for breast cancer in a resource limited country — Are we upto the challenge!

Objective: To analyse outcomes of breast conservation surgery and to identify the factors that could have affected the outcomes.

Method: The retrospective study was conducted at the Shaukat Khanum Memorial Cancer Hospital and Research Centre, Lahore, Pakistan, and comprised data of breast conservation surgery cases done between January 2011 and October 2014 in order to cover up for the 5-year follow-up of the last enrolled patient. Data, obtained through the institutional information and database system, included disease-recurrence, 5-year disease-free survival and overall survival. Data was statistically analysed using SPSS 20.

Results: Of the 553 cases, 417(75%) had no loco-regional recurrence or distant metastasis, while 136(25%) had some form of loco-regional, distant or contralateral metastasis at 5-year follow-up. In patients who had recurrence or metastasis, only progesterone receptor status, nodal status and mode of treatment showed significant association (p<0.05). Mortality at 5-year follow-up was 77(14%). Amongst the patients who died, only progesterone receptor status and nodal status had significant association (p<0.05). Five-year overall survival for the cohort was 476(86%), whereas 5-year disease-free survival was 409(74%).

Conclusion: Breast conservation surgery was found to have favourable outcomes, while progesterone status, nodal involvement and mode of treatment significantly affected the outcome.

Worldwide, breast cancer is the most common cancer among women of all ages, and has been historically treated by knives, forceps and cauterising irons to amputate the breast.1 The surgeons in ancient Egypt also described the cancer of breast, but they were wise enough to refrain from using the knife1. In 1748, Lorenz Heister2 described breast amputation using forceps or ropes attached to lancets to lift the breast before amputation, but cautioned against operating if there was swelling in the axillary region because the 'virus of the cancer'' could remain concealed in other parts. London-based John Hunter warned that 'leaving the least part of cancer is equal to leaving the whole'.1,2 William Halsted3 first described radical mastectomy which was later modified by Patey4 and remained popular for nearly 80 years.

Introduction of Paget's theory in the 1970s led to the understating of systemic nature of breast cancer and subsequently the surgeons started to adopt less aggressive methods of treatment.5,6 Remarkable studies by Veronesi et al.7 and by Fischer et al.8 in the 1990s described no significant overall survival (OS) differences among patients undergoing conservative breast surgery with radiotherapy to those undergoing total mastectomy for localised invasive carcinoma of the breast. Thereafter, breast conservation surgery (BCS) combined with radiotherapy became the preferred option for patients with early-stage breast carcinoma.9

Several studies have demonstrated the clinical safety of BCS in terms of OS. This has extended the indication of this procedure in up to 80% of women affected by breast cancer due to improved screening modalities, advancements in neo-adjuvant treatments as well as increased awareness among patients.10-12 As affirmed by the Milan conference in 2006, BCS should aim at complete excision of tumour with oncologically safe margins without compromising on the shape and appearance of the breast.13,14

Over the last two decades, BCS technique has grown fast across the globe due to acceptability, improved quality of life (QOL) of patients and cosmetic outcomes, thereby influencing the final psychological outcomes. However, BCS is a lesser utilised mode of treatment in developing countries due to advanced presentation, limited resources and surgeon's reluctance5. The practice is changing due to more awareness among the patients and the clinicians as well as advancements in radiological and chemotherapeutic techniques, and the availability of multidisciplinary team (MDT) facilities.9-12

The current study was planned to analyse BCS outcomes at a single institution, and to identify the factors that could have affected the outcomes.

The retrospectively study was conducted at the Shaukat Khanum Memorial Cancer Hospital and Research Centre (SKMCHRC), Lahore, Pakistan, and comprised BCS data of cases done between January 2011 and October 2014 in order to ensure the 5-year follow-up of the last enrolled patient. The SKMCHRC is the largest charity-based cancer institute in Pakistan with a dedicated Breast Oncology Unit where patients are assessed through triple assessment. The management plan is discussed in weekly multidisciplinary oncology meeting and the treatment is offered to the patients after taking into consideration patient's wishes and available resources.

After approval from the institutional ethics review board, data was retrieved from the institutional information and database system using the convenience sampling technique. All the women with newly-diagnosed breast cancer on histopathology, regardless of cancer type who underwent BCS during the specified period were included. Data related to men with invasive mammary carcinoma, women with metastatic breast cancer at presentation, and women who underwent mastectomy were excluded.

Data was statistically analysed using SPSS 20. Mean ± standard deviation was used to express quantitative data, while frequencies and percentages were used for qualitative data. The association of explanatory variables was determined by using chi-square test. Kaplan-Meier survival curves were used to assess OS of the cohort. Log-rank test was used to compare the OS and DFS. Statistical significance was defined as two-tailed p<0.05. 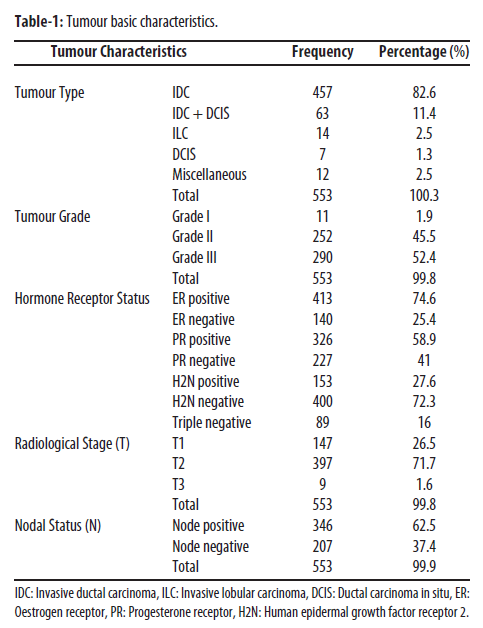 Overall, 218(39%) cases had positive lymph nodes on fine needle aspiration cytology (FNAC), while 335(61%) who were either FNAC-negative or had radiologically benign lymph nodes were subjected to sentinel lymph node biopsy (SLNB), and 128(38.2%) of them turned out to be positive for metastasis, while 207(61.8%) were negative. As such, 207(37.4%) were lymph node negative and 346(62.5%) were lymph node positive who finally underwent axillary lymph node dissection (ALND). A total of 352(63.6%) cases received neo-adjuvant chemotherapy (NAC) and 201(36.3%) had upfront surgery. As assessed by post-NAC ultrasonography, 225(63.9%) cases had partial response in which tumour regressed, but did not completely disappear, 67(19%) had complete response with tumour having completely disappeared, and while 60(17%) showed no response, meaning either no change or progression in tumour size (Table-2).

Among patients who had complete pathological response, 11(16.4%) had recurrence/metastasis, and among them, 6(8.9%) died during follow-up.

Also, 417(75%) cases had no loco-regional recurrence or distant metastasis, while 136(25%) had some form of loco-regional, distant or contralateral metastasis at 5-year follow-up (Table-3). 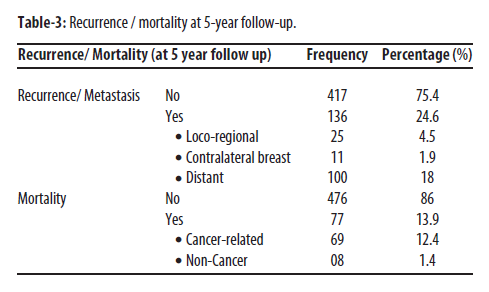 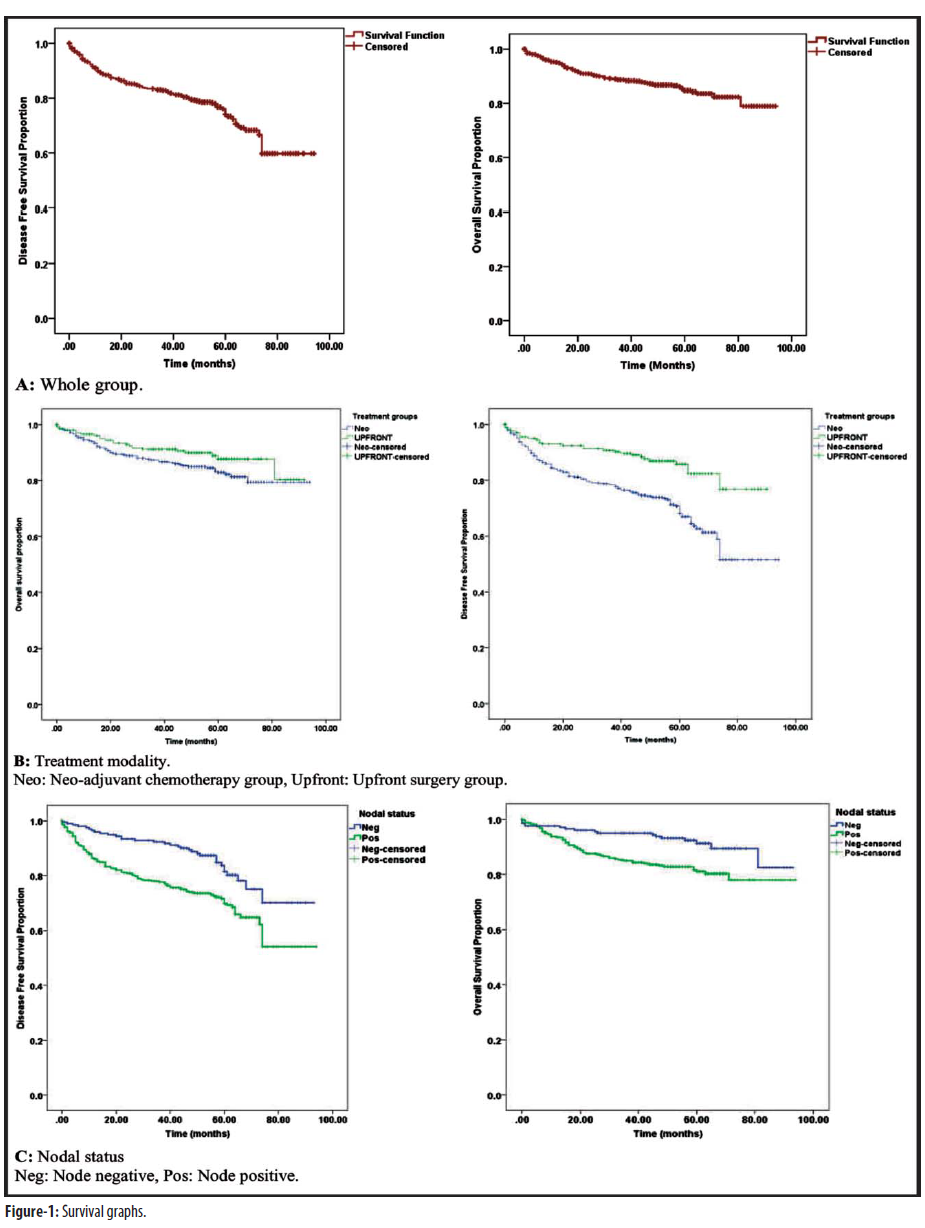 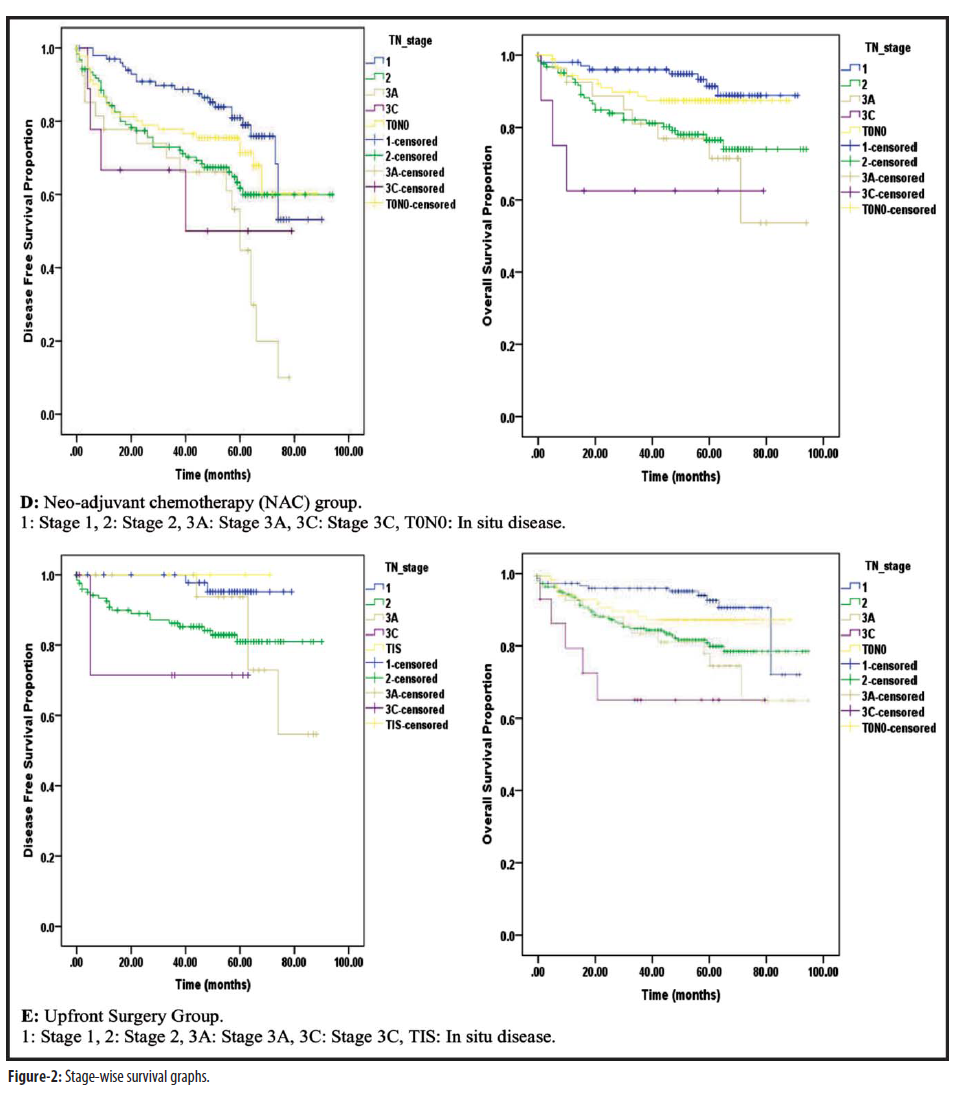 The current study found that median age for diagnosis of breast cancer in the sample was 47 years (range: 25-84 years). Invasive ductal (ID) variety was found in 83% cases, which was consistent with global literature,15 while majority presented at radiological stageT2 (72%) followed by T1 (26%), which contrasted with international data which reports T2 at 54% and T1 at 34%.15 This early diagnosis in T1 is probably attributed to increased awareness campaigns and availability of screening programmes that are lacking in our part of the world. Marissa et al.16 reported 25% grade III tumours, which is contrary to the current finding of grade III tumours being 52%.

A study17 in 2015 at the same institute reported administration of neo-adjuvant therapy in only 24.3% patients in contrast with our 64% in the current study. This major shift may be attributed to the advancements in chemotherapeutic regimens and understanding of the systemic nature of breast cancer.

In the current study, 335(61%) patients were subjected to SLNB, while axillary nodal disease was found in 346(63%) patients who were either positive on FNAC or SLNB. Node-positive patients finally underwent ALND. This contrasts with a study11 1which carried out SLNB in 82.5% patients and complete axillary surgery in 41.1%. Another study also reported similar results, finding axillary lymph node involvement in 24.5% of the screened breast cancer patients.18 This observation relates either to decreased yield of radiological gadgets coupled with lack of national breast cancer screening programme or early spread of disease in the local population compared to the developed world and needs a separate study to investigate the patterns of tumour spread in the local population.

The current data showed local relapse in 25(4.6%) patients, which is comparable with various studies.19,20 Five-year DFS reported earlier18 was 96% which is consistent with 95% reported by the current study for stage 1 disease in the upfront surgery group, while 5-year DFS dropped to 51% in stage 3 patients who received NAC. Of note is that the current study points out recurrence and 5-year DFS significantly affected by PR status (p=0.008), nodal involvement (p=0.001) and mode of treatment offered (p=0.001), while receptor negativity or triple-negative tumours were statistically non-significant when compared in terms of recurrence. PR positivity has been shown in 18.2% cases21 and 4.5% cases,9 which is contrary to the current findings.

As far as 5-year OS is concerned, the current study recorded 82% survival for NAC patients and 88% for upfront surgery cases (p=0.10) which is comparable to international data.16-18 Moreover, Veroneisi et. al, reported no survival difference between mastectomy and breast conservation surgery after 20 years of follow up.22 The possible factors having significant association with mortality in the current study were PR status and node positivity. Amongst the women who died, 78% were lymph node-positive (p=0.003) at the time of diagnosis; an observation which strongly supports systemic nature of the disease.18 International data has reported ER expression as being associated with mortality,16 while the current study found PR expression to influence mortality (p=0.001).

The current study has certain limitations. Firstly, being a retrospective study, it could not cannot change the current practices or management strategies based on its findings. Secondly, the study reported higher recurrence and mortality in NAC cases, which might be an expected outcome, as the disease was already advanced in this group compared to those undergoing upfront surgery. Thirdly, the study is a single-centre experience which only accepts patients according to a predefined criterion due to resource limitation. Moreover, an insight on the type of chemotherapy given to the patients is lacking. As such, we recommend further prospective studies that may address the limitations of the current study.

BCS was found to have favourable outcomes in terms of disease recurrence, 5-year OS and DFS. PR status, nodal involvement and mode of treatment were found to affect the outcome significantly.

Acknowledgements: We are thankful to Mr. Muhammad Abu Bakar for his help in statistical analysis and compiling of results.

Consent for Publication: Not Applicable.

Conflict of Interest: Authors declare no conflict of interest.

Financial Disclosure: Authors received no funding from any organisation or individual.