Increased frequency of fibromyalgia among patients with chronic pain presenting to internal medicine clinics of a tertiary care hospital: A cross sectional study

Objective: To estimate fibromyalgia frequency among patients presenting with complaints of chronic fatigue and or generalised body pain for at least six weeks.

Methods: The cross-sectional study was conducted at the Department of Internal Medicine, Indus Hospital, Karachi, between December 2016 and March 2018, and comprised patients of either gender presenting with complaints of chronic fatigue and or generalised body pain for at least six weeks. They were assessed for fibromyalgia according to the 2010 Fibromyalgia Diagnostic criteria questionnaire. The Data was analysed using SPSS 21.

Conclusion: All patients with generalised pain should be evaluated for fibromyalgia and a diagnosis made to reduce the cost of further referrals and investigations, and delay in the management of this debilitating disorder.

Fibromyalgia (FM) syndrome is characterised by chronic widespread pain1 with similarities to neuropathic pain in clinical findings, pathophysiology and neuropharmacology. Chronic widespread pain, the cardinal symptom of fibromyalgia (FM), is common in the general population, with comparable prevalence rates of 7.3% to 12.9% across different countries.2 It usually presents with symptoms like fatigue, sleep disorders, morning stiffness, headache, paraesthesia, hyperalgesia and allodynia. Fibromyalgia is often comorbid with psychiatric disorders,3 such as depression, anxiety and irritable bowel syndrome (IBS),4 that worsens the quality of life (QOL) of the affected.

The exact cause of fibromyalgia is unknown. Despite the advances that have been made in clarifying the concept of this disease, a unifying understanding of FM is still lacking, and it is expected that diverse mechanisms contribute differently to the clinical picture in several individuals.5

The American College of Rheumatology (ACR) defined fibromyalgia as widespread pain for at least 3 months and the presence of at least 11 of 18 specified tender points on examination.6 A new diagnostic criteria was proposed in 2010 that included multiple symptoms and, rather than checking the tender points, it focussed on individual's self-report of symptoms.7

Fibromyalgia may be considered a discrete diagnosis or as a constellation of symptoms for which effective treatment is now possible.8 Concomitant FM is a common clinical problem in rheumatologic diseases, and therefore the recognition of FM component is vital for the optimal and successful management of those medical conditions.9

Physician's understanding of this debilitating disorder is restricted, and it is even difficult for the experienced medical professionals to diagnose and treat this condition. Due to the nature of disease, where patients experience invalidation by medical services, their families and societies regarding the recognition and management of disease, direct, indirect and immeasurable costs are considerable.10

FM prevalence of 7.3-12.9% has been reported from different Western countries, including the United Kingdom, the United States, Canada, Israel and Sweden.2 It is quite common to have FM in the patients suffering with systemic lupus erythematosus (SLE), and it was found that 65% of SLE patients were diagnosed with FM as well. Among the patients presenting to clinics in Mexico, Spain, Australia and US, FM prevalence was between 10.2% and 15.7%.2

In 2010, a survey in five European countries, France, Germany, Italy, Portugal and Spain estimated overall FM prevalence in the general population to be 4.7%.6

In a meta-analysis in 201512 79 surveys from general adult population, general elderly population or workers of 28 low- and middle-income countries (LMICs) were reviewed. Mean FM prevalence was 4% (range: 2-9%).

A 2015 review pointed out the important but indiscernible features of FM with respect to the high influence of this disease on the patients and their careers.10 The 'ice-berg like' feature of this disease starts from making a diagnosis to manage this disease and the costs associated with it.

To date only one prevalence study has been conducted in Pakistan, in 1998, which focussed on major rheumatic disorders, including FM in the northern parts of Pakistan.13 The prevalence of FM was 21 per 1000, and a female-to-male ratio of 13:1 was found.

The current study was planned to estimate the frequency of FM in patients presenting with complaints of chronic fatigue and generalised body pain of at least six weeks.

The cross-sectional questionnaire survey-based study was conducted at the Department of Internal Medicine, Indus Hospital, Karachi, from December 2016 to March 2018. After approval from the institutional ethics review board, the sample size was calculated using OpenEpi software with confidence interval (CI) 95%, precision 6% and prevalence 55.2%.11 The sample was raised using non-probability consecutive sampling technique from among adult outpatients of their gender aged 18-60 years, presenting with complaints of general malaise and chronic fatigue for at least 6 weeks that were not attributed to viral illness or other medical conditions that cause fatigue, such as hypothyroidism, hepatitis, vitamin D and B12 deficiency or anaemia. These were assessed using thyroid stimulating hormone (TSH), vitamin D levels, serum vitamin B12 levels, complete blood count (CBC) and viral markers. The other causes, like connective tissue disorders or malignancies, were ruled out by taking history and by conducting thorough examination. Additional tests were done where the history or examination so suggested. Patients requiring in-patient care, those with acute infections, those who did not agree to participate or who had difficulty in understanding the questionnaire were excluded.

Data was collected after taking informed consent from all the subjects. The data-collection tool was the new 2010 Fibromyalgia Diagnostic criteria questionnaire by ACR.14 This questionnaire consists of two components: the widespread pain index (WPI) and the symptom severity (SS) scale (Annexure). 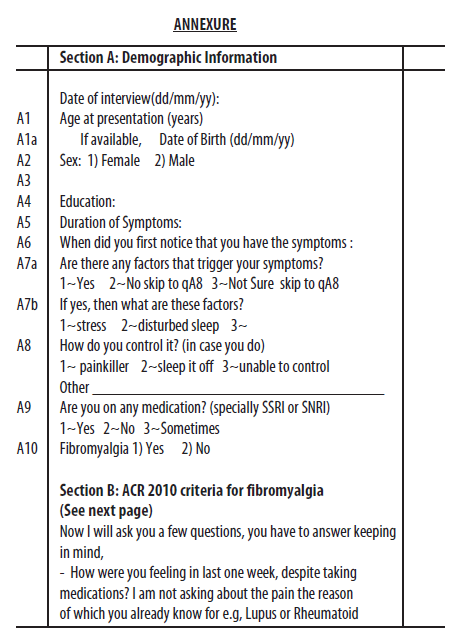 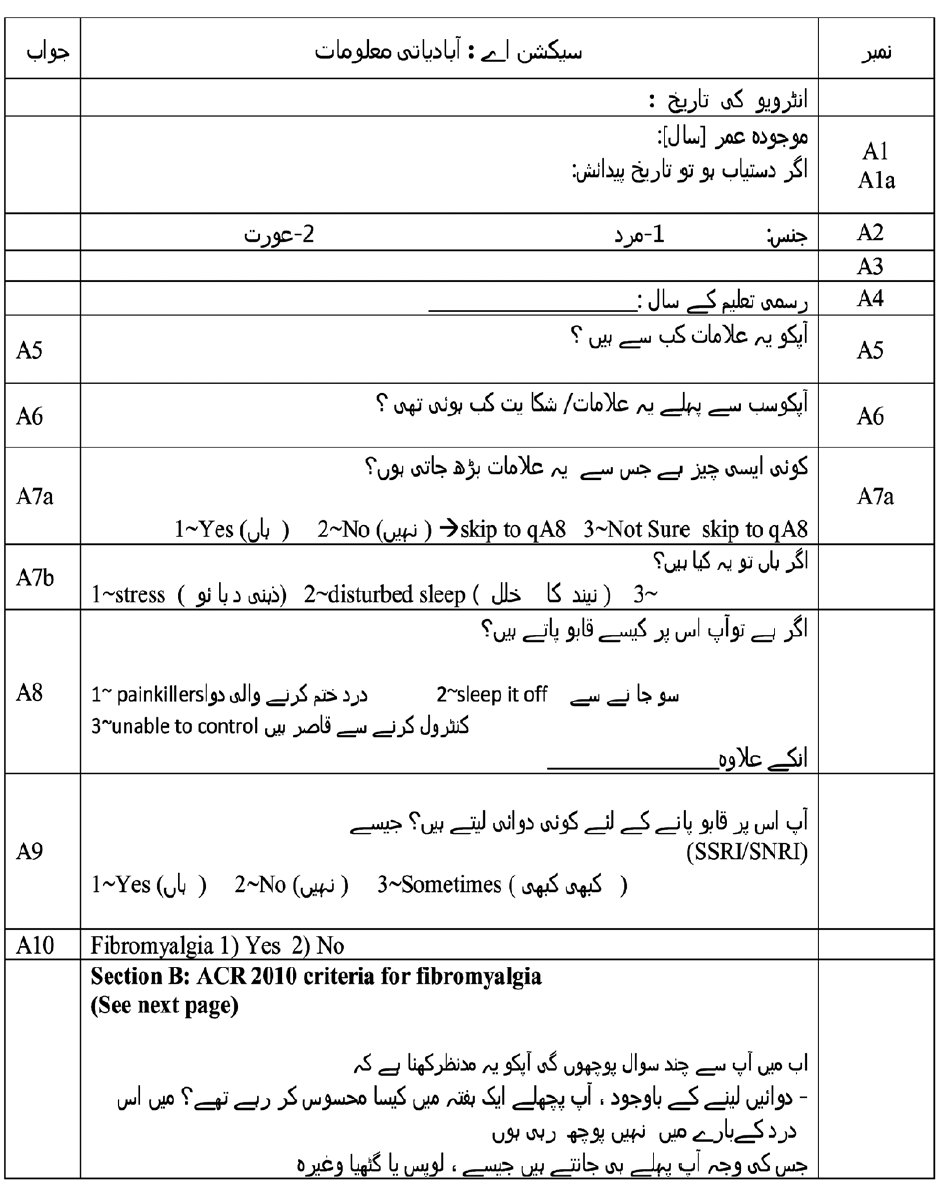 Besides, patients' demographic data and reason for visit were also noted. The patients were interviewed in the Urdu, the national language Urdu, and the interview was conducted by the researcher in the Internal Medicine clinics.

Data was analysed using SPSS 21. Mean ± standard deviation (SD) and median with interquartile range (IQR) were computed, as applicable, for age, duration of symptoms, WPI and SS scores. Frequencies and percentages of FM were calculated for gender and monthly income. Effect modifiers for age, gender, duration of symptoms, and monthly income were stratified. Post-stratification chi-square test was applied to see the effect of these outcomes. P<0.05 was considered significant.

FM prevalence was significantly associated with level of education (Table-1).

Eighty-one (65%) of FM patients said they could control their symptoms by using pain-killers, 27 (21.7%) of the patients sad by taking rest they felt better, and 22 (17.6%) reported that their symptoms were uncontrollable. Also, FM patients did not use any medications (Table-2).

Association between monthly income and FM was non-significant (p<0.05).

FM is a distressing medical condition that affects QOL in functional, social and economic terms and its impact on people's lives is considerable.15 In this study FM prevalence was 56%.

In our study FM patients were older (40 years and above) compared to those not having FM and the results were statistically significant up to 10% level of significance. These results are supported by a systemic review and meta-analysis published in 2016 which concluded that the prevalence was found twice as high in women as in men and with those aged more than 40 having a higher prevalence.16 In a study, symptom duration significantly increased with age.16

The findings of the present study that stress and depression are strong triggering factors and predictors of worse health status support previous research.22 Interventions that directly target stress and mood are effective as adjunct treatments for FM patients.

The monthly income of the individual was also compared with FM prevalence, which in our study was non-significant. However, a study in Israel revealed that FM patients belong to lower socioeconomic levels.23

There are no investigations or biomarkers available for FM diagnosis currently, and the finding is made to a great extent by clinical decision. In a study comprising family physicians, it was found that even though they were unaware of the diagnostic criteria for FM and could not make a definitive diagnosis, they were able to recognise some of the FM symptoms.24 The new modified ACR criteria 2010 relies on the self-reported symptoms by patients and has eliminated the need of physician's evaluation of the somatic symptoms.23

The high FM prevalence in Pakistani population that generally goes unrecognised needs awareness of disease among medical professionals. Awareness will increase the chances of early diagnosis and treatment of patients at a much less cost.25 Effective treatment is possible utilising a multidisciplinary approach combining no pharmacological and pharmacological treatments rooted in a bio-psychosocial model.26

There was a high FM frequency in patients with chronic pain that should not be underestimated. All patients with generalised pain should be evaluated for FM using ACR criteria and a diagnosis must be made to reduce the cost of further referrals and investigations and unavoidable delay in FM management.

Acknowledgment: We are grateful to the Indus Hospital institutional review board for providing the necessary help.

Disclaimer: The preliminary results of the study were presented at ICON 2018, held at the Indus Hospital, Karachi, on January 19, 2018.