Conclusion: Isolated pseudomonas was the most common pathogen. Prompt diagnosis with culture sensitivity tests are needed in developing countries to avoid blindness due to infective corneal ulcers.

Most of the organisms, apart from the fastidious organisms, invade the epithelium of the cornea first and then continue to penetrate the stroma and cause stromal necrosis, leading to perforation and endophthalmitis.5

The current study was planned to understand the causes and types of infective keratitis, including the risk factors and sensitivity patterns of the offending organisms.

The prospective cohort study was conducted at the Ophthalmology Department, Fauji Foundation Hospital (FFH), Rawalpindi, Pakistan, from January 2018 to December 2019. After approval from the institutional ethics review committee, the sample size was calculated using anticipated population 59%11 with 12% precision and 95% confidence interval (CI). The sample was raised using non-probability convenience sampling technique from among patients of either gender with presumed diagnosis of infectious keratitis. Patients with Mooren's ulcer, marginal ulcer or ulcers due to peripheral ulcerative keratitis (PUK), and those who were lost to follow-up were excluded. Data was collected after taking written informed consent from all the subjects. Corneal scrapings were taken on day of presentation under topical anaesthesia using the standard protocol. Conjunctival swabs were also taken. Gram staining and potassium hydroxide (KOH) 10% preparation for fungal hyphae was done, then inoculated on blood agar, chocolate agar, MacConkey agar, Sabouraud agar and brain-heart infusion. Viral keratitis was diagnosed via clinical assessment on the basis of dendritic lesions on slit-lamp examination and loss of corneal sensations. Patients were divided into two groups; the exposed group consisting of patients who showed growth on culture, and the control group comprising patients who did not show growth or ulcers that were viral in origin. Treatment for bacterial infections began using moxifloxacin 0.5% eye drops and it was modified according to the culture report. For fungal infections, natamycin 5% eye drops were used. Ulcers were monitored for size and regression of symptoms in addition to VA of patients, and the final assessment was done at the end of the one-month follow-up. VA was measured using a Snellen's chart and it was converted into decimal acuity. The Freiburg visual acuity test11 has established the decimal acuity values of counting finger (CF) and hand movement (HM) as 0.014 and 0.005, respectively, and they were analysed as such. Individuals having vision worse than HM were removed from analyses, as it cannot be quantified in such cases. 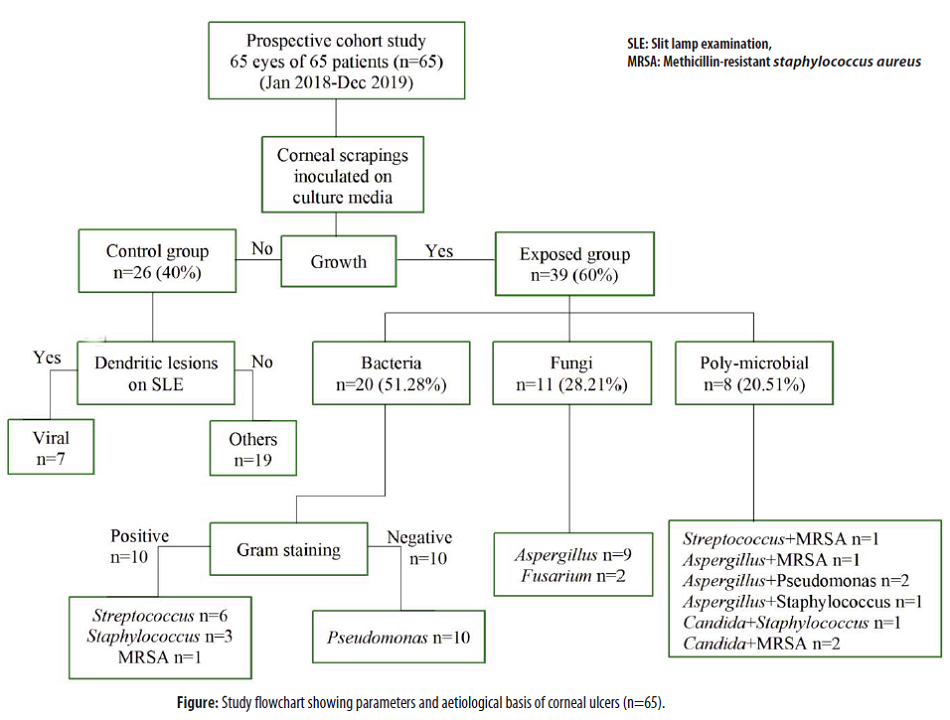 According to sensitivity reports, more pseudomonas infections were sensitive to ciprofloxacin. Methicillin-resistant staphylococcus aureus (MRSA) were most sensitive to vancomycin, while streptococcus species were susceptible to vancomycin and gentamicin (Table-2).

By the end of the one-month follow-up, 40(61.5%) cases showed clinical improvement in terms of pain, infiltrate size, epithelial defect size or amount of hypopyon, while 6(9.2%) ulcers got perforated, 1(1.5%) developed endophthalmitis and 18(27.7%) showed no sign of improvement.

Infective keratitis is one of the ophthalmic emergencies. Prompt diagnosis, culture and immediate treatment is required to minimise the sight-threatening elements. In the current study, out of 65 patients, there were 40 females (61.5%) and 25 males (38.4%). High prevalence of females is in accordance with a study in Nepal.12 However, a study in Larkana showed high prevalence of males having keratitis.13 High prevalence of females in the current study might be due to the fact that families of ex-serviceman are entitled to receive treatment at the FFH.

In the current study, majority of the patients were 40-60 years of age. This is due to factors like ocular surgery, ocular surface disorders, lid deformities and, above all, diabetes in this age group. This result is consistent with another study.14

Diabetes was the most common systemic risk factor (44.6%) in the current study. A large cohort study concluded that diabetes was the predictor of corneal ulcer.18

It is important to note that in the current study, anti-fungal drops were being used by only 2 patients at presentation, which could highlight the need for more effective detection at the primary level care before referral.

In the current study, 40(61.5%) patients showed signs of healing in their ulcers, while 25 did not. These findings are consistent with medical literature that demonstrates healing rates of bacterial keratitis in excess of 60%.21,22 Four perforated corneal ulcers were treated through tarsorrhaphy and 2 by Gundersen flap. Endophthalmitis was treated by injecting intravitreal vancomycin and ceftazidime injections.

Culture results were analysed for sensitivity and pseudomonas was found to be most sensitive to ciprofloxacin, followed by ceftazidime and gentamicin. These results are consistent with some studies,23 and in contrast with some others.24 Streptococcus was found to be most sensitive to vancomycin (100%) and gentamicin (100%), while it was least sensitive to ceftazidime, doxycycline and chloramphenicol. These findings are generally consistent with earlier reports25 except that others found streptococcus to be sensitive to chloramphenicol in addition to the other antibiotics in the current study.

The current findings suggest that increased duration of symptoms, VA of CF or less at presentation, lid oedema, increased depth of infiltrate, increased size of ulcer, presence of hypopyon, and MRSA infection were associated with corneal perforation. However, logistic regression analysis using these covariates led to statistically non-significant findings.

The current study has limitations related to small sample size and short follow-up.

On the basis of the findings, however, it is strongly recommended that standard operating procedures (SOPs) should be formulated in every hospital to have microbiological testing at the time of presentation of keratitis. Ophthalmologists need to be cognizant of the procedures for proper identification of the microbes causing keratitis. It is vital to do culture and sensitivity analysis in all keratitis patients.

Finally, awareness of patients about the use of topical antibiotics and corticosteroids after cataract surgery is imperative for reducing the risk of infection. Having said that, these medications should not be overused. In order to prevent the misuse, these drops should not be given without ophthalmologists' prescription.