Objective: To determine the early breastfeeding initiation prevalence and factors associated with it in a rural seting.

Method: The cross-sectional study was conducted at Eight areas of Thatta registed in MNHR from May 2019 to July 2019, and comprised data obtained from a larger survey related to exclusive breastfeeding among women in Thatta, Pakistan, in 2019. The survey had been conducted in areas registered with the Maternal and Neonatal Health Registry, which is a population-based study for developing countries to assess pregnancy-related outcomes. Data was analysed using Stata 16.

Conclusion: Providing counseling and health education to mothers before, during and after the pregnancy are important for motivating them to initiate breastfeeding early and continue exclusive breastfeeding for the recommended period of a minimum of 6 months.

Globally, about 4 million neonatal deaths occur every year and majority of them occur in developing countries.1 Breastfeeding (BF) within 1st hour of birth, as recommended by the World Health Organisation (WHO),2 called early BF(EBF), offers  protection to neonates against infections. Also, it has been proved to be effective in preventing neonatal deaths owing to hypothermia, diarrhoea, pneumonia and sepsis.3 EBF initiation is also associated with prolonged duration of exclusive BF.4 On the other hand, delayed BF (DBF) initiation is associated with increased risk of mortality among neonates.5 Several positive effects of EBF initiation are attributed to components present in the breastmilk and the contact between the baby and the mother. For instance, colostrum contains immunological bioactive factors that offer immunological defense to the neonates and epidermal growth factors increase intestinal mucous development.

In recent times, a lot of efforts have been made by international and national stakeholders to promote EBF initiation among mothers. However, only 42% of newborns in South Asia and 45% globally receive EBF and data varies from country to country.6 The Pakistan Demographic Health Survey (PDHS) 2012-13 showed that the prevalence of EBF initiation in the country was only 18%.7

According to a study conducted in Pakistan, 57% women started BF 6-12 hours after birth which is high considering the importance of EBF initiation for both the neonates and the mothers.8 One of the important factors that can have a positive on EBF initiation is the counselling of mothers. A Pakistani study showed that mothers who had been counselled were more likely to initiate EBF compared to those who were not counselled in this regard.9 Another Pakistani study determined the relationship between EBF initiation and antenatal counselling, and reported a significant relationship between the two.10

The cross-sectional study was conducted Thatta Sindh from May 2019 from July to 2019, and comprised data obtained from a larger survey related to exclusive BF among women in Thatta, Pakistan, in 2019. The survey had been conducted in areas registered with the Maternal and Neonatal Health Registry (MNHR), which is a population-based study for low- and middle-income countries (LMICs) countries to assess pregnancy-related outcomes. The study collected information on a variety of aspects related to demographic and reproductive characteristics of mothers and BF, such as exclusive BF, child's age in which complementary food was introduced, type of food introduced, reason of introducing food, and several other aspects. The study operates under the Global Network for Women and Children Health Research, United States of America. Pakistan is also part of that study and its research activities are carried out in two sub-districts of Thatta; Mir Pur Sahkro and Thatta. The survey included a population of mothers having a baby aged 6-11 months registered in the MNHR. It implemented a systematic sampling technique. In MNHR, the sub-districts are divided into eight clusters, including both urban and rural areas, and the survey was implemented in all the eight clusters.

The variable studied the current research was EBF initiation as a binary outcome, classified as 0 for DBF and 1 for EBF. Data on factors associated with EBF initiation was obtained from the project.11

Independent variables included in the final analysis were mother's and father's education, age of mother, monthly income of the family, mother's occupation, the gender of the child, birth order, place of residence, gestational age of the baby, place of birth, professional who attended the birth, mode of delivery, family support, admission of the baby to neonatal intensive care unit (NICU), and knowledge of mother related to BF.

The knowledge of mothers was evaluated using a nine-item questionnaire. One point was allocated for each correct answer. Mothers who scored 70% or more were classified as having adequate knowledge, while those <70% score were considered to have inadequate knowledge.12 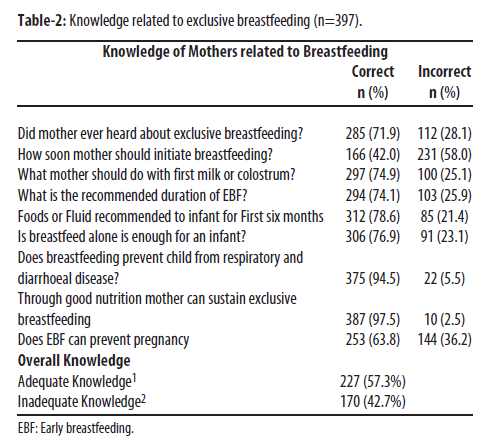 Multivariate analysis showed that factors associated with EBF initiation were adequate knowledge, place of delivery, gestational age of the baby and the age of the mother (p<0.05) (Table-3). 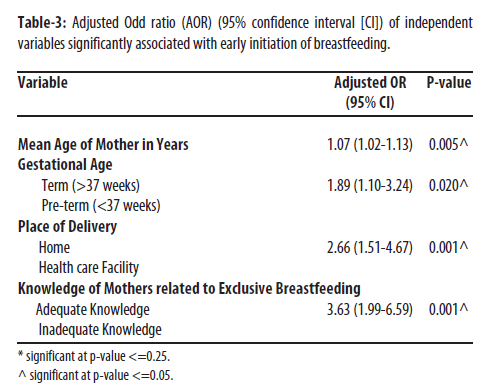 Knowledge about importance of breastfeeding is an important determinant of EBF initiation. Inadequate knowledge of mothers regarding EBF initiation is considered one of the major reasons for the poor outcome.8 Negative cultural principles about colostrum is also an obstacle in rural areas of Asia and Africa.13 In a study conducted in Ethopia, 35% mothers discarded the colostrum as they believed it will cause cramps to the baby and will be hard for them to digest.10 In the current study, 25% mothers discarded colostrum. DBF not just deprives children from protective characteristics of EBF, but it can also cause early introduction of prelacteal feeding.

Mothers who were older in age had increased odds of EBF initiation in the current study, which was similar to the findings from LMICs.14 This may be attributed to more experience and knowledge about EBF initiation and better prenatal attitude and BF intention. There is a possiblility of insecurity and inexperience among the young mothers.15 However, no significant differences were found in the rate of the EBF initiation between nulliparous and multiparous mothers, which challenges the above hypothesis.

Moreover, mothers who delivered babies at home in the current study were more likely to initiate EBF than mothers who delivered at hospitals. Contrasting findings were reported in a study conducted in Tanzania.16 The conflicting results may be due to the lack of baby-friendly hospitals in Thatta and a lack of support from healthcare professionals there. Mothers must be provided with adequate support during their stay in hospitals to promote EBF.

Another important factor contributing towards EBF initiation is the gestational age of the baby. The current study found that term babies, with gestational age >37 weeks, were more likely to have EBF than pre-term babies. Similar findings have been reported earlier.17 Pre-term infants are likely to experience issues with initiating as well as maintaining BF.18

No significant relationship of the outcome was found in the current study with occupation of mother, education of mother, and total household income. This was consistent with a study done in Namibia.19

The use of secondary data in the current study means the findings are applicable on the population of Thatta, and caution is critical in interpretation and generalisation of the findings.

Besides, data regarding the time of EBF initiation in the orginal survey was based on the memory of the respondents and there may be recall bias. Furthermore, data on certain important predictors were missing, such as education about BF during antenatal visits. Finally, the data for the current study was extracted from a cross-sectional survey, and, therefore, causality could not be targetted.

Primary studies are recommended with both qualitative and quantitative components to get information regarding factors associated with breastfeeding practice. Besides, EBF initiation needs to be studies in other areas of the country to have more generalisable findings.

The WHO and The United Nation International Child Emergency Fund (UNICEF) are executing a global campaign to enhance BF, with one of the goals being to enhance EBF initiation rate to 70% globally.20 There is need to review existing BF-related policies and making sure full execution of appropriate programmes and policies across te country.

The EBF initiation rate in Thatta was 20.4% and factors associated with it included BF knowledge of mothers, place of birth, gestational age of baby and age of mother. Providing counselling and health education for mother before, during and after the pregnancy are important for motivating mothers to initiate EBF and to continue exclusive BF for the recommended period.

Acknowledgment: We are grateful to Dr Sarah Saleem, Professor at the CHS Department, Aga Khan University (AKU), Karachi, for allowing us to use data for the study.

Disclaimer: Data is extracted from a thesis, which was a cross-sectional survey, of factors associated with exclusive breastfeeding.

6.      Ekubay M, Berhe A, Yisma EJIbj. Initiation of breastfeeding within one hour of birth among mothers with infants younger than or equal to 6 months of age attending public health institutions in Addis Ababa, Ethiopia. Intl Breastfeeding J. 2018;13:4.

20.    WHO. The Partnership for Maternal, Newborn and Child Health 2016 annual report: coming of age in a time of transition. World Health Organization, 2017.