Objective: To determine the trend of resistance to antimicrobials in Streptococcus pneumoniae infections, and the impact of new Clinical and Laboratory Standards Institute guidelines on 1211 among meningeal isolates.

Method: The descriptive observational retrospective study was conducted at the Aga Khan University Hospital laboratory in Karachi, and comprised Streptococcus pneumoniae isolation and antimicrobial susceptibility data over a period of 24 years, from 1993 to 2016, which was compared in terms of pre-2008 and post-2008 data, which was analysed using SPSS 19.

Results: Of the 7415 non-duplicate isolates identified, 4700(63.4%) were from male patients and 2,715(36.6%) were from female patients. The overall mean age of the patients was 38±27 years. Penicillin resistance in non-meningeal isolates during the two periods was not significantly different (p>0.05), but a significant rise in penicillin resistance in meningeal isolates was observed in the second period (p<0.05). High resistance rates were observed for co-trimoxazole, tetracycline and erythromycin, and an increased trend of multi-drug resistant strains was also noted from 1999 {n=35/317(11%)} to 2016 {n=110/314 (36%)}.

Conclusion: The emergence of multi-drug resistant strains was evident. The spike in penicillin-resistant Streptococcus pneumoniae in meningeal isolates may have been due to the revised guidelines by the Clinical and Laboratory Standards Institute.

During the initial years of penicillin discovery and its use, S. pneumoniae remained susceptible to beta lactam antibiotics. In 1967, the first penicillin-resistant S. pneumoniae (PRSP) clinical isolate was reported in the United Kingdom.3 This was followed by reports from all over the world, including South Africa, Europe and the United States.4,5 Simultaneously, there was the emergence of multidrug-resistant (MDR) S pneumoniae, meaning resistance to three or more different classes of antibiotics, worldwide.5-7 Usually higher prevalence of resistant pneumococcal isolates in a community is influenced by injudicious use of antibiotics.8-10

Until 2008, the Clinical and Laboratory Standards Institute (CLSI) guidelines for susceptibility testing of penicillin from all sources, including meningeal pneumococcal isolates, were the same. S. pneumoniae was considered susceptible when the minimum inhibitory concentration (MIC) was <0.6ug/ml, intermediate resistant when MIC ranged 0.12-1ug/ml, and resistant when MIC was >2ug/ml.11 Given the limited penetration and bioavailability of penicillin through meninges, CLSI in 2008 revised MICs of pneumococci isolated from the cerebrospinal fluid (CSF). As per new recommendations, meningeal isolates with MIC <0.06 ug/ml are considered susceptible and >0.12 ug/ml are considered resistant. For non-meningeal isolates, breakpoints for intravenous (IV) penicillin susceptibility is defined as <2ug/ml, intermediate as <4ug/ml and resistant >8ug/ml. However, for oral penicillin, the breakpoints for sensitivity are defined as <0.06ug/ml, 0.12-1ug/ml and >2ug/ml respectively12 for sensitive, intermediate resistant and resistant isolates.

For effective treatment of serious pneumococcal infections, it is imperative to know the trend of penicillin and other drug resistance among the local isolates. The current study was planned to analyse the changing trends of penicillin resistance in meningeal and non-meningeal S. pneumoniae isolates and to assess resistance to erythromycin, tetracycline, co-trimoxazole, ofloxacin, ceftriaxone and vancomycin. It also planned to determine the impact of new CLSI susceptibility breakpoints on the clinical isolates.

The descriptive, observational, retrospective study was conducted at the Aga Khan University Hospital (AKUH) laboratory, Karachi, and comprised S. pneumoniae isolation and antimicrobial susceptibility data over a period of 24 years, from 1993 to 2016, which was compared in terms of pre-2008 and post-2008 periods. The laboratory receives clinical samples from inpatients and outpatients mostly from within Karachi, but also processes samples from different collection points all over the country.

Data from clinical isolates of S. pneumoniae and their antimicrobial susceptibility was retrieved from the laboratory information system after obtaining exemption from the institutional ethics review committee. Patient demographics, date of specimen collection and source of specimen were recorded. Isolates were categorised as invasive when isolated from CSF, blood, synovial fluid, pus from sterile body sites, deep tissue and wounds. Isolates from sputum, tracheal aspirates, bronchial lavage, eye and ear were considered non-invasive. The data was then categorised into four age groups; <5 years, >5-<15 years, >15-<59 years and >60 years.

For all antimicrobials, data was analysed to see the trend of antimicrobial resistance (AMR). For benzyl penicillin, data was divided into two groups: pre-2008 and post-2008, corresponding to the CLSI guideline change.12

Data was analysed using SPSS 19. For descriptive analysis, mean and standard deviation of continuous variables, such as age and MICs, were determined. For categorical variables, like gender and antibiotic resistance, frequencies and percentages were calculated. P<0.05 was considered significant.

Resistance to penicillin, erythromycin, tetracycline, co-trimoxazole and ofloxacin among the isolates was noted (Figure-1).

The trend of penicillin resistance in meningeal isolates is given in Figure-2. 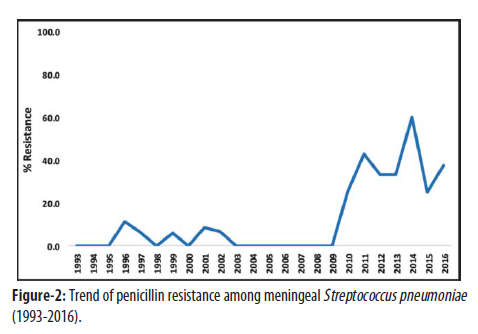 No resistance to ceftriaxone and vancomycin was observed.

Penicillin resistance emerged in 2004 and remained around 1-2% in the latter part of the study period (Table-1). 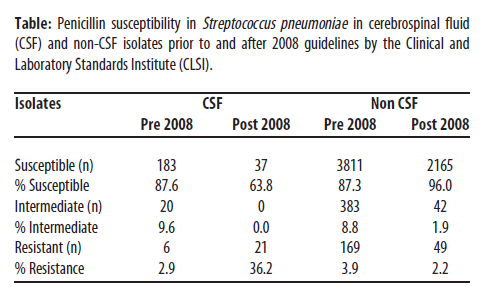 Among the S. pneumoniae isolates collected between 1993 and 2016 in the current study, the resistance to penicillin and ofloxacin was overall found to be low. High resistance to co-trimoxazole, tetracycline and erythromycin was observed, particularly in the latter half of the study, which in turn led to a high MDR rate. No resistance to ceftriaxone and vancomycin was detected.

The current finding of low resistance to penicillin in non-meningeal isolates, which is similar to data published by the Asian Network for Surveillance of Resistant Pathogens (ANSORP) study and Taiwan, reported 0.7% and 0.5% resistance in non-meningeal isolates respectively.13,14 This is in contrast to data published from the United States, various parts of Europe, Saudi Arabia and Lebanon.5,15-19

Consistent with previously published studies from the South Asian Association for Regional Cooperation (SARC) countries,26 frequency of penicillin resistance was highest in isolates from children <5 years of age. Excess use of antimicrobials due to frequent respiratory tract infections amongst children could be a possible reason for this finding. Furthermore, our findings advocate cautious use of antimicrobials in children. Many reports attribute the emergence of penicillin-resistant S. pneumoniae serotypes to the initiation of vaccination.13,27-29 Some Asian countries have reported high prevalence of erythromycin-resistant and MDR S. pneumoniae serotype 19A after the introduction of pneumococcal conjugate vaccine (PCV7).13 Although baseline data on prevalent      S. pneumoniae serotypes in children from Pakistan30 is available, the impact of immunisation on the emergence of resistance could not be assessed due to the recent addition of pneumococcal vaccine to the childhood immunisation programme.

Similar to reports published previously, resistance to co-trimoxazole remained very high in the current study.18,19,31-33 Resistance to tetracycline and erythromycin also increased to around 50% and 30% respectively over the years. These results are consistent with global and regional data that report increased resistance to these agents.13,19,33,34 Of note is the fact that this finding limits empirical use of co-trimoxazole, erythromycin and tetracycline in respiratory tract infections despite their low cost and widespread availability.

MDR S. pneumoniae rates were reliably analysed from year 1999 onwards and were observed to have increased at an alarming pace to around 35% in 2015. It is important to note that the rise in isolation of MDR S. pneumoniae and erythromycin resistance was concurrent in the current study for the last 18 years. Regional data on MDR S. pneumoniae reported a very high prevalence from India and the Asia Pacific region.13,33 This is very worrisome and highlights the dire need for implementing an antimicrobial stewardship programme among community physicians, including paediatricians and family physicians.

Resistance to fluoroquinolone remained low (6%) throughout the study period, which is consistent with reports published from other Asian countries.13 This is encouraging as family physicians working in primary healthcare settings as well as clinicians based in tertiary care hospitals can use respiratory fluoroquinolone empirically for lower respiratory tract infections.

Since the current study was a retrospective analysis of a prospectively collected database, it could not eliminate all the biases linked to such an analysis. Despite the limitation, however, the resistance trends of commonly used antimicrobials for S. pneumoniae isolates will be crucial in drafting treatment guidelines for pneumococcal infections.  The findings can be used in the development of local and national guidelines for the management of pneumococcal infections.

The emergence of MDR strains was evident. The spike in penicillin-resistant S. pneumoniae in meningeal isolates may have been due to the revised CLSI guidelines. An increasing trend in isolation of erythromycin-, tetracycline-resistant and MDR S. pneumoniae is a cause of concern. Low resistance to penicillin and fluoroquinolones in non-meningeal isolates permits use of these drugs in the community setting. High penicillin resistance in meningeal isolates justifies the empiric use of ceftriaxone and vancomycin in pneumococcal meningitis with de-escalation to ceftriaxone after availability of susceptibility results.

Acknowledgement: We would like to thank section of Clinical Microbiology, Aga Khan University Hospital Laboratory for their technical support.