Conclusion: The use of a standardised near-miss criterion makes audit and comparison of results between hospitals and even countries having the same resources possible and reproducible.

Maternal death (MD) has been used traditionally as an indicator of quality of care provided to the obstetric population. Maternal mortality is also a social indicator of how a society cares for human beings irrespective of gender. Mostly, information and statistics on morbidity and mortality are available from hospitals, and community-based data-collection is almost nonexistent. Even though mortality cases are fewer, hurdles have been encountered in studying them. Thus, a need was felt for a quality indicator which was more common and prevalent across the world. Maternal near-miss (MNM) case is defined as a woman who survives life-threatening conditions during pregnancy, child birth, or within six weeks postpartum.1 High-quality timely care is crucial in saving lives. Every year, 10 million women suffer from severe complications of pregnancy. Out of these, nearly 50,000 die and 99% of these deaths occur in the developing countries and most of them are largely preventable.2 Pakistan is one of the countries with high maternal mortality rate of 178/1000 and the exact number of severe morbidity or MNM cases is not known, which underlines the importance of identifying and managing such cases by healthcare staff as well as administrators.3

One of the primary objectives of the World Health Organisation (WHO) Global Strategy for Women, Children and Adolescents Health 2016-2030 is to ensure adequate quality of healthcare, and its provision is considered a basic human right.4 The WHO and partners since 2004 are working on approaches to improve maternal health and the level of provision of health services. The MNM approach was considered to be the most inclusive.5 In 2009, the WHO presented a consensus MNM definition along with validated criteria for identification of such cases.6 The MNM audit approach was developed in 2011 for the evaluation of obstetric care quality in health facilities.1 Compared to MD, MNM cases are more common, especially in low maternal mortality settings and their review bring to surface the gaps in healthcare delivery. It also identifies the areas that need allocation of resources. Another advantage is that discussing mortality can be considered threatening as well as emotionally taxing by hospital staff which is not so in MNM cases as women survive and can provide details themselves. It requires development of communication skills by staff dealing with these women.7 As a result of these factors, the review of MNM cases is more acceptable to all stakeholders; healthcare staff, patients and their families. Extensive research has been carried out in the past decade to identify MNM cases and to understand the hindrances in healthcare delivery.8 A study in 2013 identified MNM cases by applying the WHO criteria.9 The current study was planned to identify MNM cases through a standardised approach and to provide statistical evidence to work on the areas that need more attention by measuring mortality and morbidity statistics.

The prospective cross-sectional analytical study was conducted at the Obstetrics Unit of Combined Military Hospital (CMH), Kharian, Pakistan, from January to June 2019. After getting approval from the institutional ethics review board, the sample size was calculated using Open Epi sample size calculator10 with 95% confidence interval (CI), 5% margin of error and 3% incidence of severe maternal morbidity and mortality.5 The sample was raised using non-probability sampling technique from among cases of severe maternal complications, critical interventions, and life-threatening conditions using the WHO criteria.1 All healthy patients who had uneventful childbirth were excluded. Staff members were sensitised for case identification. Data was collected after taking informed consent from patients with severe maternal outcome who fulfilled the criteria. Demographic profile included age, parity, period of gestation, booking status and mode of delivery. Also noted was data on MNM status: whether on arrival or within 12 hours or developed after 12 hours. Intensive care unit (ICU) admission and total length of hospital stay was also noted. For MNM cases, clinical criteria to identify organ dysfunction, investigations and management-based organ dysfunction was used. To calculate severe maternal outcome ratio (SMOR), MNM+MD rate per 1000 live births (LB) was calculated. SMOR is an indicator identifying the care areas and resource requirement in an area or facility. MNM ratio (MNMR) refers to the number of near-miss cases per 1000 live births. MNMR and SMOR together estimate the need for investment in human resource, equipment or policymaking at a certain facility or area. Maternal mortality ratio (MMR), which is the ratio of MNM to MD, is the ratio between MNM cases and MDs. The areas or hospitals exhibiting higher ratio provide quality care. Mortality index (MI) was calculated, with higher index indicating low-quality care. To calculate it, the number of deaths due to a condition was taken as a numerator and was divided by the sum of near-miss morbidities and MDs from that condition. This indicator is helpful as it directly identifies the impact of care received by the patient for a particular condition.

Data was subjected to descriptive analysis using SPSS 20. Frequencies and percentages of the underlying causes of death and contributory conditions were calculated. MMR and MNMR were calculated using 1000 live births as the denominator. 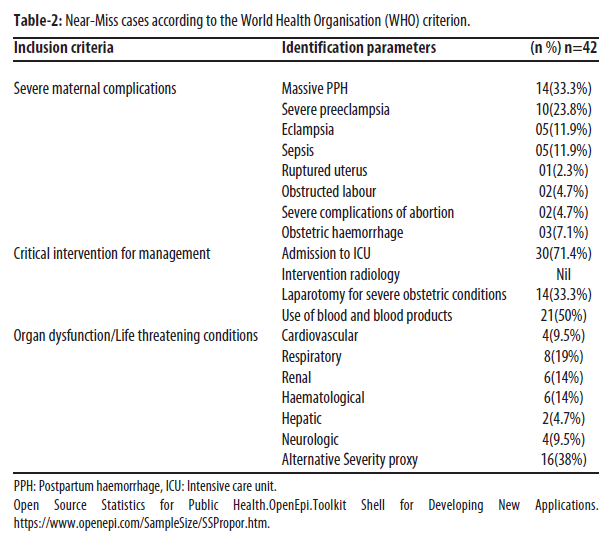 MNM has been used as a complimentary indicator of maternal health because of a reduction in maternal mortality worldwide.11 Morbidity and mortality continues to occur in obstetric patients despite tremendous advances made in healthcare over the decades.12 In order to understand the failures of health systems and to devise methods to solve issues related to obstetric care, an increasing number of studies have been conducted over the last decade.13 Many studies have been carried out on MNM, but they lacked uniformity. WHO MNM identification criteria incorporates the clinical, laboratory as well as management-based criteria, thus providing a balanced blend of previously used criteria.1

In the current study, there were 42 MNM case over six months. The mean age of MNM cases was 29±2.5 years and majority 32(76%) were multigravida (MG) with median parity 2±1.2. Highest MI was in the >40 years age group. A six-month study in an Australian tertiary maternity hospital showed almost double the number of MNM cases with higher parity.14 Mean age in another study was 27±4 years and 56% were primigravida (PG) and 43% MG.15 In another study, MNM was higher (45.6%) in MG, but mortality was the same.16 The mode of delivery in the current study showed 63% MNM cases delivered by Caesarean Section (CS) and 36.9% by vaginal delivery, but these had high MI of 5.8%. A study in India reported that CS was required in 37.5% MNM patients.17 Majority of the MNM patients in the current study were un-booked (73.9%) with a high MI of 8.8%, while all in the mortality group were un-booked which is in agreement with other studies.18-20 A study in Karachi also showed highest mortality (54.4%) in patients referred as emergency cases.16 In the current study, 50% patients were referred in time before labour and had a low MI of 3.3%. Those referred after delivery were only 15% and had the highest MI (28%). In a study done in Pakistan on similar lines, 48% MDs happened at healthcare facility, 27% at home and 22% en route. All of these nearly were due to delay in seeking treatment and no prior contact with healthcare professionals.21 More than 90% of referred patients from other hospitals arrive late and in a critical condition.22,23

Leading severe maternal complications in the current study were massive PPH (33.3%) followed by pre-eclampsia (23.8%) and eclampsia (11.9%). PPH was the major contributor of MNM in the current study compared to (64%) reported in Brazil24 and 36% in Ethopia.11 This is primarily due to an increase in the incidence of placenta accreta spectrum (PAS) as 24 patients presented with the condition, while 16 had obstetrical hysterectomy.

A study showed that the most significant criteria for identifying MNM was management-based.2 Management-based MNM criteria was the leading identification parameter in 87% participants in a study, followed by clinical and laboratory criteria, which is in agreement with the current study.22 Among life-threatening conditions, alternate severity proxy (38%) was the main contributor. The leading organ system involved in the study was respiratory (19%), followed by haematological and renal systems (14%) each. One study reported that the most common was haematological system (34%), followed by neurological (15%), renal (12.5%) and cardiac (9.3%) systems, while the least frequent was respiratory, but 50% of the mortality was in this group. ICU admission was major criteria in 71.4% of critical interventions, followed by use of blood products in 50% of patients in the current study, while it was laparotomy in another study.17

The MNMR was 39/1000 in the current study against 7.4/1000 reported in Brazil14 and 24/1000 in India.12 The MNM-to-MD ratio in the current study was 10.5:1, which means there was one maternal death for every 10.5 MNM cases, with an MI of 8.6%, compared to MNMR 17/1000 LBs and MNM-to-MD ratio 4.9:1, with an MI of 16.9% reported in Africa.11 A similar study at a tertiary care hospital showed MNM-to-MD ratio of 5.6:1, and MI 14.9%.15 Across the high-income countries, the reported MNM-to-MD ratio was 1:117-223,25 and in the rest of the world it was anywhere between 7-40/1000 LBs.26 Frequency of MNM cases in a study done in Sweden, a high-income country, was 2.9/1000. The participants were immigrant Asian population which compares well with the participants of the current study. The most frequently occurring criteria in the Swedish study was uterine rupture, followed by pre-eclampsia.27 In most of the studies done in low- and middle-income countries (LMICs), the leading cause of maternal morbidity and mortality was still the same triad of haemorrhage, hypertension and sepsis, although the WHO MNM approach was not used in these studies for case identification.18-21

A similar study, conducted in the same hospital, reported 76 MNM cases. The MNM ratio was 676, MNM-to-MD ratio was 10:1 and MI was 8.4%.9 A comparison of results of the two studies at the same centre showed an improvement in all indicators.

The audit approach shows that despite all the advancements in drugs, massive transfusion protocols and surgical techniques, the leading cause of morbidity and mortality was still PPH and hypertensive disorders. Un-booked patients contributed to high MI and complications occurring in booked patients were better managed. CS deliveries had a high MI directly, and majority of cases ending up in hysterectomy were due to PAS, a known complication of repeat CS, thus identifying the need to reduce CS rate. A multipronged approach targeting patients, communities and healthcare system is required to address these issues, and audits, like the present study, will help in identifying the areas requiring maximum financial and human resource investment.

The WHO criteria helped in systematic data-collection and comparison of health indicators over time. Substandard care was identified for healthcare providers and healthcare administrators to act upon.

Disclosure: The Abstract was submitted to the Royal College of Obstetricians and Gynaecologists (RCOG) World Congress 2020, and was accepted as a poster presentation.

1.      WHO. Evaluating the quality of care for severe pregnancy complications: The WHO near-miss approach for maternal health. Department of Reproductive Health and Research, 2011.