Conclusion: The success rate of re-treatment of multi-drug resistant tuberculosis with conventional regimen was found to be unacceptably low.

Multi-drug resistant tuberculosis (MDRTB) is a more difficult-to-treat form of TB that requires prolonged and extensive chemotherapy with second-line drugs (SLDs) which are least effective and are associated with adverse effects and poor outcomes.1-4

Pakistan is listed fourth among the 22 high-burden countries in the world for MDRTB. 5 The results of a recent drug resistance surveillance carried out in Pakistan showed that the estimated percentage of MDRTB in new notified TB cases is 3.7% while in the cases previously treated for TB it is 18.1%.7

MDRTB treatment is widely available in Pakistan through the programmes implemented by the National TB Control Programme (NTP) and the Global Fund. The management of MDRTB is difficult and has lower success rates compared to susceptible TB. 8,9

Retreatment of MDRTB is a major challenge as these cases have been previously treated on MDRTB regimen and declared as 'cured', 'treatment completed', 'lost to follow-up', 'treatment failed' and 'not evaluated' which includes patients for whom treatment outcome is not assigned, the cases 'transferred out' to another treatment unit and for whom treatment outcome is unknown.6 If the patient is lost to follow-up or has not taken the drugs, uninterrupted treatment, though 'completed' or 'cured', the chances of retreatment relapse with amplified drug sensitivity test (DST) are higher i.e. the patient develops resistance with more drugs. 10,11 Hence, designing a regimen becomes complicated for physicians as the choice shrinks and they have to prescribe more drugs to intricate the four effective drugs on the regimen, which means higher number of less effective drugs with more adverse effects and lower success rate. 12-14

The current study was planned to find the predictors of time to culture conversion and unfavourable interim outcomes in MDRTB retreatment cases to identify the patients at the risk of treatment failure or death and those who do not benefit from the retreatment while taking the six-month interim outcome as predictor of the final outcome. 13

The prospective longitudinal study was conducted from March 2016 to January 2017 at the Indus Hospital TB Clinic and seven other sites that are part of the hospital's Programmatic Management of Drug Resistant Tuberculosis (PMDT) initiative. These sites are Ghulam Muhammad Mahar Medical College Hospital, Sukkur, Jinnah Postgraduate Medical College, Karachi, Chandka Medical College Hospital, Larkana, Fatima Jinnah Chest Hospital, Quetta, Institute of Chest Diseases, Kotri, People's University of Medical and Health Science, Nawabshah, and Civil Hospital, Mirpurkhas. Approval for the study was obtained from the ethics review board of the Dow University of Health Sciences (DUHS), Karachi. Separate consent was unnecessary as it was a non-experimental and prospective clinical case series, and direct patient contact was not made at any point. Only patients' medical records and laboratory reports were reviewed from the hospital's health management information system and laboratory records.

The sample was raised using non-probability purposive sampling technique, and data of all bacteriologically-confirmed MDRTB patients was included who had previous history of SLDs for one month or more, were culture-positive at baseline, and were being treated under NTP guidelines15 and who had completed at least 3 months on the treatment. Extra pulmonary TB cases were excluded, and so were those who were transferred out to other facilities before six months of their treatment as the six-month interim outcome and time to culture conversion could not be assessed for such patients. Patients' sputum smear microscopy and culture results were reviewed prospectively till 6 months of their treatment and later till their 6-month interim outcome was available and sputum smear testing and culture results of the sputum sample taken at the 6th month became available.

To determine the risk factors of poor interim outcomes, univariate and multiple logistic regression analyses were done. To determine the effects of continuous variables on interim outcomes independent t test was performed. Risk factors for failure to culture conversion were assessed using the Cox Proportional Hazards Model. Only variables with p<0.25 were included in the final multivariate analysis except age and gender. Confidence interval (CI) was set at 95% and p<0.05 was considered statistically significant. 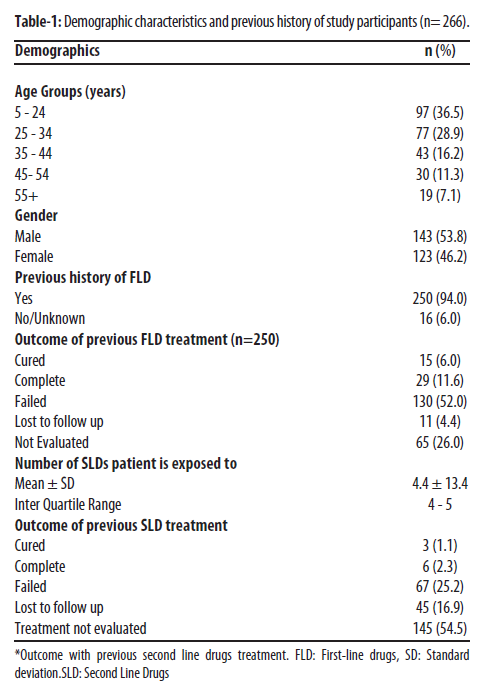 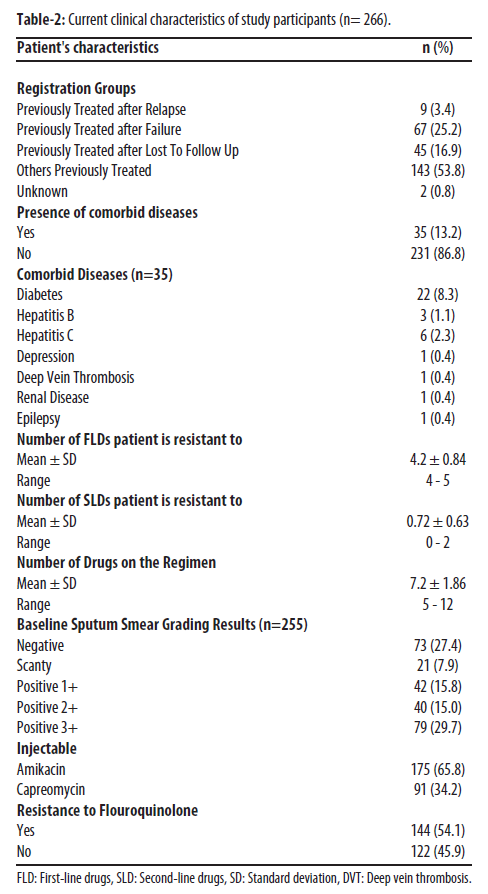 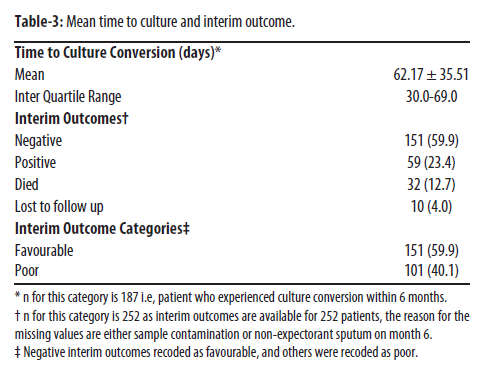 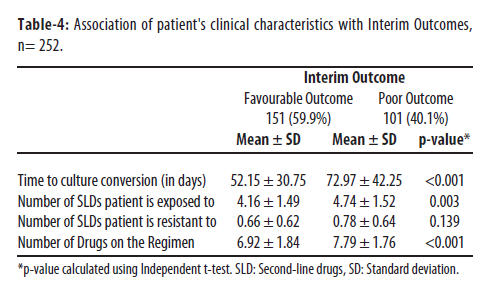 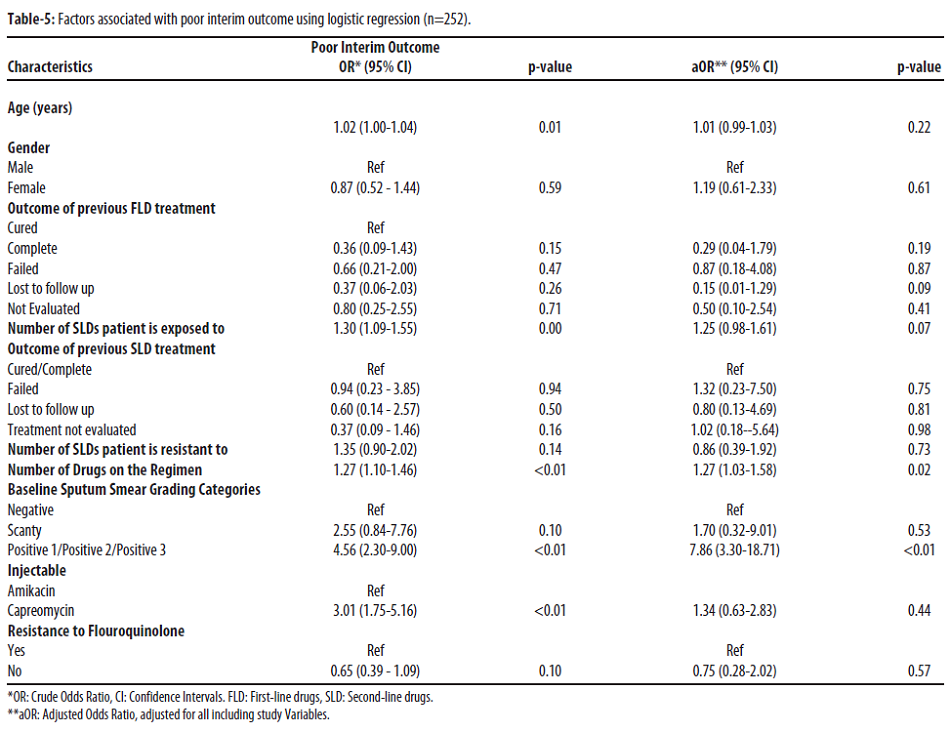 However, in multivariate Cox Regression, the patients who were not resistant to fluoroquinolones were more likely to experience culture conversion than those who were resistant to fluoroquinolones (OR: 2.00, 95% CI: 1.23-3.24). The patients with higher sputum smear grading were 54% less likely to experience culture conversion within the initial 6 months of treatment with SLDs (OR: 0.46, 95% CI: 0.31-0.67) (Table-6). 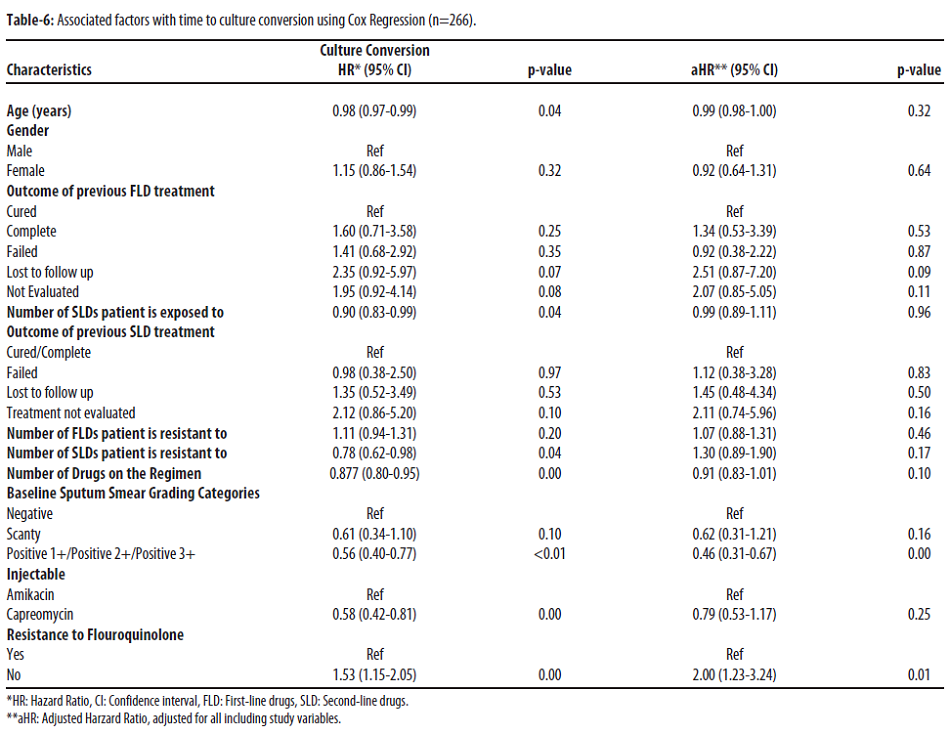 The percentage of the poor interim outcomes in our cohort is higher than the percentage of poor treatment outcome reported by other studies; 40.1% versus 20.4%-21.3%.5,16 It might have been because all of the patients in the current cohort were those who were previously exposed to SLDs. However, the result of a study conducted in Pakistan are in agreement with the current findings. 17 The loss to follow-up rate in the cohort was quite lower compared to some studies16,17 and higher than others. 5 The mortality rate was fairly comparable to an earlier report. 16

Older age, previous exposure with SLDs and treatment with capreomycin were associated with poor treatment outcomes in Uzbekistan, Georgia, Armenia, Swaziland and Kenya. 16 A study from Pakistan reported older age, lower body weight, residence in rural area, fluoroquinolones resistance, previous treatment with SLDs, SLD resistance and cavitary lung disease were associated with poor outcome in MDRTB patients. 18 However, the current study found that the higher number of drugs on the regimen and higher sputum smear grading at baseline were the factors associated with poor interim outcome in both univariate and multivariate regression models.

The MDRTB relapse rate in the current setting was lower than earlier findings. 24

The case finding for MDRTB and extensively drug-resistant TB (XDRTB) should be enhanced as early initiation of treatment will favour better outcomes and less further resistance. Fluroquinolones resistance was high, and we recommend adding another effective drug as part of standard MDRTB regimen. Bedaquiline and delamanid should be made available across the country to be used in eligible patients to reduce mortality due to MDRTB. Pyrazinamide should be added to regimen and considered clean only if reliable DST shows susceptibility to it. Drugs with unclear efficacy, like para-aminosalicylic acid (PAS) and clarithromycin should be avoided in MDRTB regimen as such medicine cause unnecessary burden on patients with various side-effects.

Acknowledgment: We are grateful to all the staff at all the Programmatic Management of Drug Resistant Tuberculosis (PMDT) sites, and to all the people involved in the process of data entry.

13.    WHO. Companion Handbook to the WHO Guidelines for the Programmatic Management of Drug-Resistant Tuberculosis. 2014.