Objective: To compare the effectiveness of subtalar mobilisation technique on pain and functional disability compared to conventional physiotherapy in patients with plantar fasciitis.

Method: The randomised controlled trial was conducted at the Prime Care Hospital, Faisalabad, Pakistan, from January to August 2017, and comprised patients of either gender aged 30-60 years presenting with complaints of heel and foot pain, a limited range of motion at the ankle joint due to heel pain, and pain in the morning when taking the first steps or after prolonged rest. The participants were randomly assigned to intervention group A, that received subtalar mobilisation, and control group B treated with therapeutic ultrasound. The groups received two treatment sessions per week over 3 weeks. Patients in both the groups received stretching and rigid tapping as standard treatment. Visual analogue scale and the foot and ankle disability inventory were used to measure pain and functional disability. Data was analysed using SPSS 20.

Conclusion: Subtalar mobilisation with movement was found to be effective in reducing pain and functional disability than conventional treatment in patients with plantar fasciitis.

Plantar fasciitis (PF) is the most common cause of heel pain that affects 10-15% of the general population during their lifetime.1 As non-inflammatory component is identified in recent literature in PF, the term may be modified as 'fasciosis' for a more appropriate description rather than 'fasciitis' that contains an inherent inflammatory component.2 PF is more prevalent than other foot pathologies that are presented in clinics, with an average of around two million people seeking treatment for it annually in the United States.3 A study conducted in Peshawar reported a prevalence of 13.2% in the security population.4 Another study conducted among Pakistani teachers reported a 34.7% PF prevalence.5 Overweight individuals, middle-aged women, athletes and male runners are mostly prone to plantar heel pain.6 There is an ongoing debate in literature about the causative factors of PF. Excessive loading of the plantar aponeurosis sometimes causes plantar fasciopathy.7

Pain can present unilaterally or bilaterally during the initial steps in the morning or on resuming activity after an extended rest span. This distinctive presentation is often used to rule out other causative factors of heel pain.8 Cases with suspected fractures or with nerve entrapment in the tarsal tunnels can be excluded by the finding of increased pain symptomology on bearing weight on ankles. In adults, the bilateral pain around the ankles is referred to as Reiter's syndrome, from the family of reactive arthritis.9

Various non-surgical treatments have been used to relieve the symptoms associated with heel pain. These include rest, active and passive range of motion (ROM), stretching and strengthening exercises, manipulation, mobilisation external support, including orthotics, night splints, and modalities such as therapeutic ultrasound with or without the use of tropical application, electrical stimulation, whirlpool, and administration of non-steroidal anti-inflammatory drugs (NSAIDs) through iontophoresis.6,10,11 Among these treatment methods, there is good evidence for the use of modalities and therapeutic exercises, but these are long-term approaches.12 Among conservative methods, the use of therapeutic ultrasound modality involves transmission of ultrasonic waves which increases tissue temperature and improves the extensibility of the fascia, thus stimulating the thermal cutaneous receptors. The non-thermal role of ultrasound is to modulate membrane properties, alter cell proliferation, and increase growth in proteins connected with inflammation and injury repair. Taken together, data suggests that non-thermal effects of therapeutic ultrasound can modify the inflammatory response.13 Thus, the inflammatory component of PF is managed by this non-thermal factor.14 A recent review of PF found that there is still a lack of high-quality evidence of any treatment modality.15

Rigid taping is sometimes used for load reduction on the calcaneal attachment of the plantar fascia by supporting the longitudinal foot arches, minimising stress on the transverse arch, and limiting pronation in the forefoot.16 Taping manoeuvres shift the load from the medial longitudinal arch to the lateral border of the foot. This stress re-direction limits the pronation in the foot, promoting the healing process.17 Increased use of taping has been found in literature for treating individuals with acute and sub-acute PF. The tape has also been used as a preventive measure for this condition.18

A comparative study among patients with PF to determine the efficacy of subtalar mobilisation techniques in combination with the conventional treatment protocols for any reduction in pain and disability level reported that benefit of subtalar mobilisation group was superior to conventional therapy alone in the management of patient with plantar heel pain, which indicated that the visual analogue scale (VAS) score between the two groups was significant.19 Successful trials of conservative management of PF have been reported in literature.20,21 There has been limited research about the use of manual therapy methods and their effectiveness in subjects diagnosed with PF.22 Therefore, the current study was planned to determine the effectiveness of subtalar mobilisation versus conventional treatment on pain and functional disability in PF subjects.

The single-blind randomised controlled trial (RCT) was conducted at the Prime Care Hospital, Faisalabad, Pakistan, from January to August 2017. After approval from the ethics review committee of the local campus of Riphah International University, the sample size was calculated using G*Power calculator23 with 5% margin of error, 80% power and effect size d=0.74 based on a previous study.24 The sample was raised using purposive sampling technique from among patients of either gender aged 30-60 years presenting with complaints of heel and foot pain, limited ROM at the ankle joint due to heel pain, and pain in the morning when taking the first steps or after prolonged rest. Individuals with a history of trauma, acute or chronic pathology, any systemic illness, like rheumatism, a fracture below the knee during the preceding year, prior foot surgery, or a positive diagnosis of fat pad syndrome or tarsal tunnel syndrome were excluded.

After taking informed consent from the participants, they were randomised using computerised random numbers to intervention group A receiving subtalar mobilisation, and control group B receiving therapeutic ultrasound. The assessors were blinded to the treatment group to which a patient was allocated.

The intervention group A received subtalar mobilisation with movement through Mulligan technique for 15 minutes, stretching for 15 minutes and rigid tapping as standard treatment. Each patient received two treatment sessions per week for three weeks.

In the control group B, conventional physiotherapy included a session of therapeutic ultrasound for 15 minutes, stretching for 15 minutes and rigid tapping as standard treatment. Each patient received two treatment sessions per week for three weeks.

Outcomes were measured using VAS and foot and ankle disability index (FADI)25 at baseline, after 1st and 2nd week, and at the end of the treatment.

Data was analysed using SPSS 20. Quantitative variables were expressed as mean ± standard deviation (SD). After application of analysis of variance (ANOVA), Tukey test was used for pairwise comparison for VAS and FADI within the groups. Independent samples t-test was used to find significant difference between the groups. P<0.05 was taken as statistically significant. 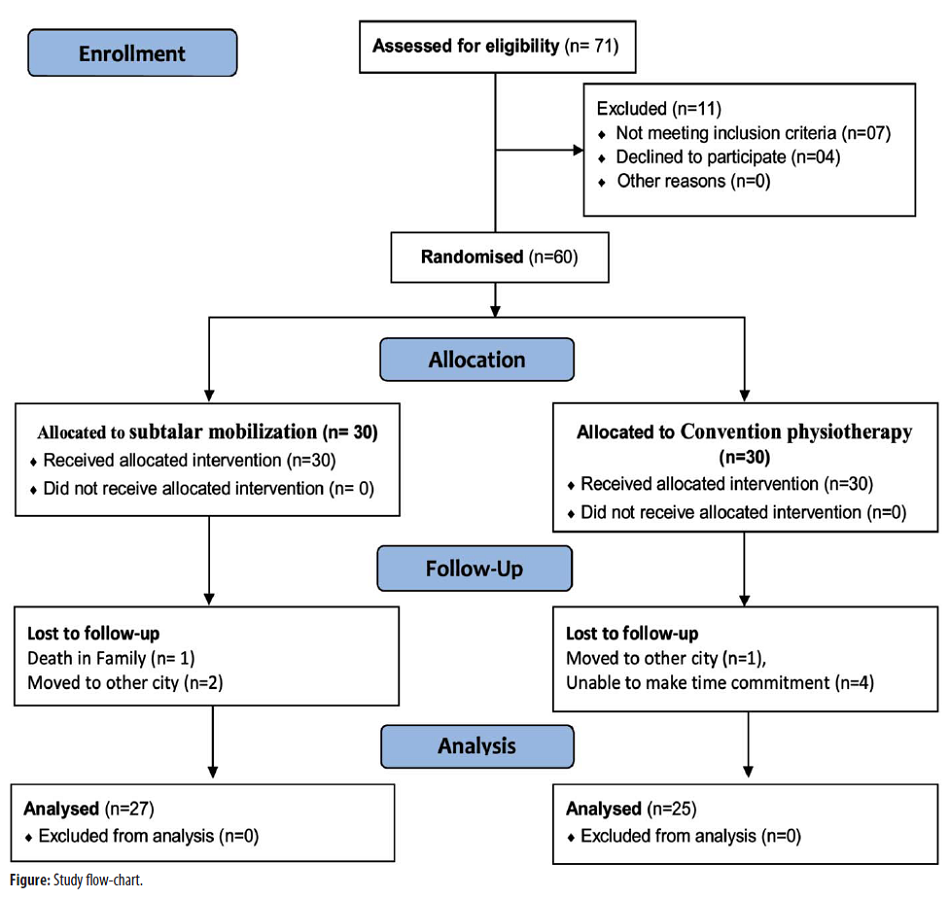 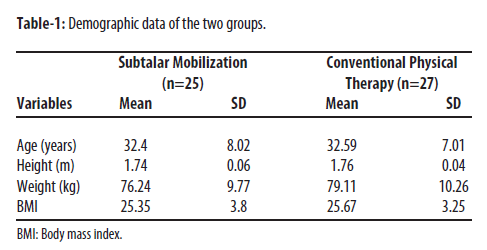 There were significant differences in both the groups (p<0.05) except for VAS score at first week in group A (Table-2).

Both the groups showed improvement, but group A showed better outcome than group B (Table-3).

In the current study, the experimental group had decreased signs and symptoms of PF, which helped in rapid healing. A similar study that compared the effects of taping techniques on reducing plantar fascia inflammation showed that subjects in the group in which taping was applied had faster decrease in their symptoms than did those in the other group (p = 0.013).26

The current study used manual subtalar mobilisation with movement combined with taping techniques as the mainstay treatment for PF and compared this treatment with conservative treatment. The intervention manual treatment significantly reduced the mean pain profile, measured by VAS, on a sample of 30 participants. A study in 201516 reported similar results, but that study had a sample size of just 30 participants divided into two groups. The control group also showed some improvement, but the difference was not significant. The finding is supported by other studies.20,21

Only limited studies have been conducted in which large sample sizes were used to determine the effectiveness of manual mobilisation techniques. One case study included only four subjects who had complaints of inflammation of the plantar fascia. A combined treatment method of manual therapy (subtalar mobilisation joint glides) and stretching was applied for 8-10 months. The results of the treatment were compiled using assessment of pain reduction using a pain rating scale and a functional assessment. Mobilisation at the targeted joints resulted in reduction of pain and improvement in activities of daily living.27

A study provided evidence that early subtalar mobilisation techniques are helpful in the reduction of complaints of pain in cases of plantar fascia inflammation.28 This supports the recommendations in recently published clinical practice guidelines for the treatment of PF which stated that, although weak, there is evidence that supports manual therapy as an effective treatment in the management of heel pain.29 A study24 established that manual therapy is a better approach in treating patients with plantar heel pain. Decreased pain and improved foot function in people with PF are because subtalar mobilisation helps to increase the mobility of the calcaneus and talus, which decrease traction stress through the plantar fascia, which decreases pain and increases foot function.30

The current study has limitations as the RCT was retrospectively registered with the World Health Organisation (WHO)-recognised Iranian Registry of Clinical Trials, with the registration number RCT20200221046567N2 on April 18, 2020. URL:https://www.irct.ir/trial/46988. Moreover, purposive sampling was used with limited generalisability and lack of control for confounding factors despite randomisation. Future studies on physiotherapy management of PF should investigate the effectiveness of different types of combination of mobilisation with movement therapy with other electrotherapy modalities and should have long-term follow-up.