Effects of drug abuse and mental disorders on oral health: A case report

Substance use disorders, related to mental health issues can lead to oral pathologies. The purpose of this case report was to identify the oral conditions and manifestations in a 28-year-old male narco-dependent schizophrenic who smoked tobacco and marijuana. In intra-oral clinical exploration, poor oral hygiene, excessive tartar formation and dental plaque were observed, and the diagnosis of severe chronic periodontitis was established. The choice of a treatment plan in such patients is complex because the consequences of an invasive treatment can aggravate the psychological state and emotional stability leading to a negative effect on behaviour and mental health due to edentulism. The effects of excessive drug consumption related to schizophrenia can cause poor oral hygiene habits leading to oral pathologies and the loss of teeth.

Substance use problems are most often seen in association with certain mental health disorders. Patients with mental illnesses have changes in behaviour and concentration that prevent them from knowing the need for dental care both in hygiene and clinical care. In addition, psychiatry medications alter the normal physiology of the salivary glands and the epithelial tissue of the oral mucosa generating greater predisposition for the formation of dental plaque. It is unclear whether mental illness is a vulnerability factor for drug addiction.1,2

The changes in the oral cavity due to periodic or chronic drug use depend on several factors such as the type of drug, the route of administration, and the contaminating substances added to the drug. A few studies have been done on the consequence of the use and abuse of both legal and illegal drugs in patients with mental disorders. The objective of this case report was to analyse the effect of drug abuse on the oral manifestations and pathologies in a patient with mental disorders.

On September 28, 2020, a 28-year-old male, attended a private dental clinic San Luis Potosi, Mexico, accompanied by his parents. The patient stated that his gums suddenly start bleeding while chewing. The patient was diagnosed with schizophrenia at the age of 22 and had been smoking marijuana for the last nine years. He was on detoxification treatment but had constantly relapsed and had never been admitted to any mental health centre. He currently was taking Olanzapine 10mg daily. His was in a good general condition, although with neglected appearance and hygiene. The patient was aware of his illness. He had been smoking 8-15 cigarettes a day since he was 15 years old and consuming alcohol three to four days a week. His diet was poor and unhealthy. There was no family history of schizophrenia. A clinical intraoral examination (Table) 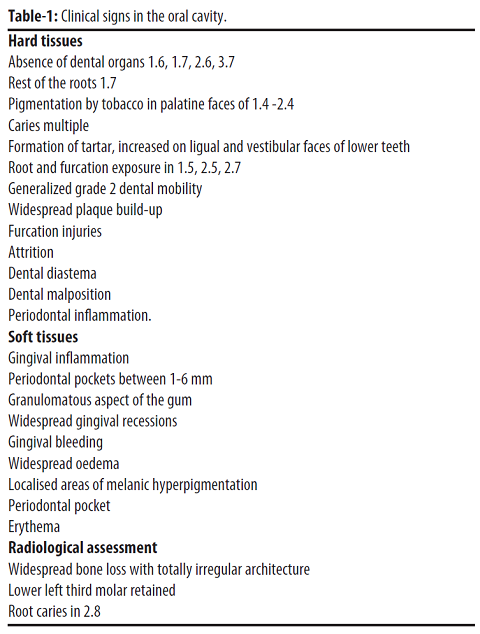 revealed halitosis and xerostomia. A panoramic X-ray was taken to confirm the diagnosis (Figure-1A). 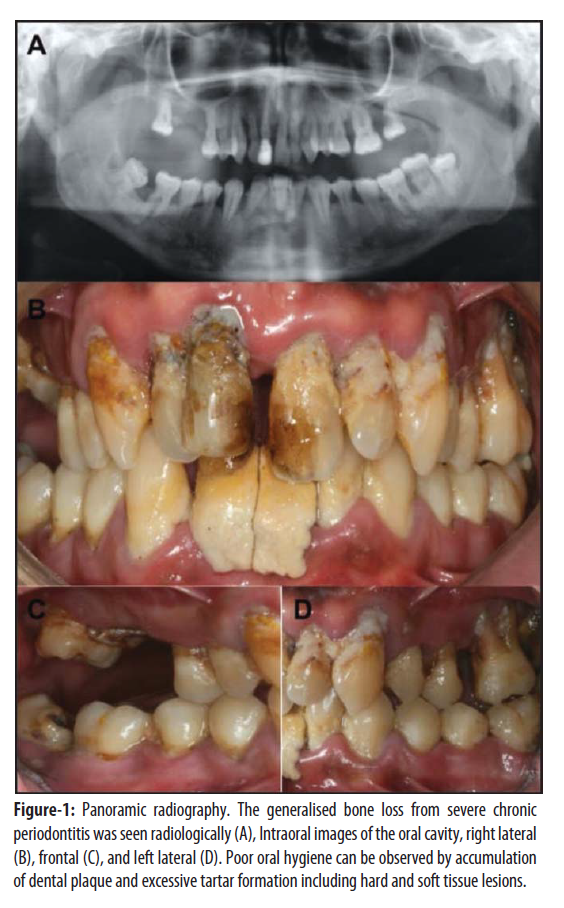 Clinical photographs are shown in Figure 1B-1D; the periodontogram is presented in Figure-2. 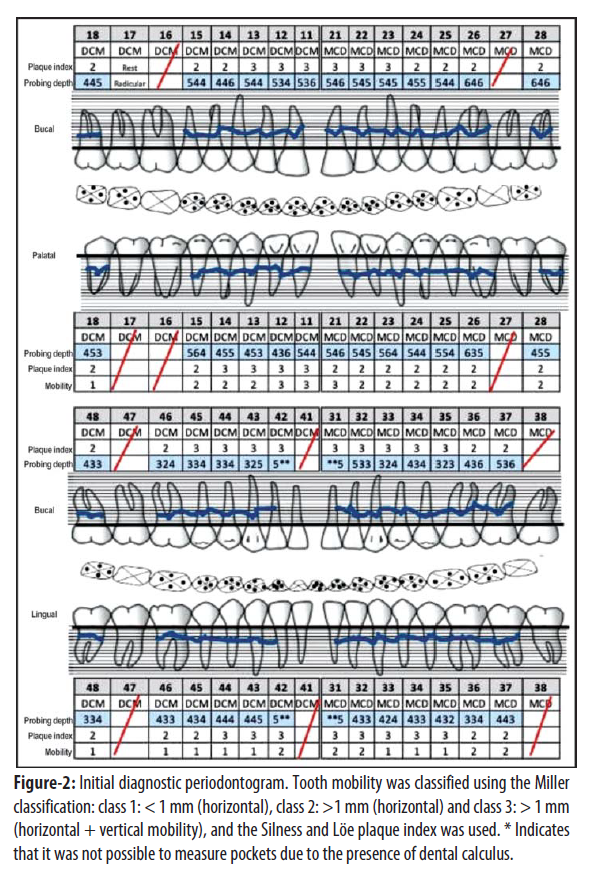 The patient had poor oral hygiene and severe generalised periodontitis and moderate bone loss. The prognostics of the upper teeth were evicted, and extractions were recommended. The lower arcade premolars and canines had a conservative diagnosis due to lower bone loss.

As the patient's caregivers, the parents were offered two treatment options. The first was conservative therapy comprising of periodontal treatment and preserving as many teeth as possible despite their poor prognosis. However, this treatment could have compromised success due to a lack of commitment and cooperation of the patient with adherence to dental hygiene. The second option, i.e. surgical-invasive treatment, involved dental cleaning to remove tartar and dental plaque followed by extractions of the upper and lower teeth with a total upper prosthesis and an immediate partial lower prosthesis after the healing period. We informed the patient about the potential oral health consequences of marijuana and tobacco. Both treatment plans included removable prosthesis, and the parents were doubtful if the patient would be willing to use them if he did not lose them. A consultation was made with his psychiatrist to evaluate the options for treatment. The consensus was to start with periodontal treatment and later perform dental extractions, postoperative visits to review the healing process of the extracted tooth were part of the follow up process of the patient. Once the healing process completed, impressions were taken to place immediate partial prosthesis; and regular oral hygiene visits continue to be carried out.

Drug abuse leads to multiple psychological and physical health problems including oral diseases.2,3 Drug-dependent people, especially those belonging to the lower socioeconomic strata, often remain without medical and dental care for years due to negligence attributed to the effects of drugs. The use of drugs can lead to a decrease in salivary flow and increased mucosal lesions, but there is no relationship with oral cancer or potentially malignant disorders.3 The users of illicit chemical substances are mostly males with a high prevalence of smoking and alcohol consumption. Drug use has been associated with poor oral health-related quality of life in young adults independent of the socio-demographic, behavioural, or clinical factors. The mouth is a primary entry point for many of these drugs; therefore, oral health becomes very susceptible to the damaging effects of these substances. Alcohol and marijuana are less harmful to health as compared to cocaine and crack cocaine. Nevertheless, they cause serious oral pathologies that compromise oral health. When a substance disorder is accompanied by a mental disorder, the medical condition and oral health becomes even more complex because the patient loses awareness due to alterations in thinking, reality, and behaviour.4

The objective of this case report was to identify oral manifestations and oral lesions in a narco-dependent patient with schizophrenia. The surgical-invasive option can aggravate the disorder and the mental health situation of the patient by leaving the upper jaw totally and the lower jaw partially edentulous. A more conservative treatment without performing multiple extractions would be compromised by the lack of commitment by the patient to sanitise his oral cavity.

Studies of schizophrenic patients show that 61% have poor oral hygiene including tooth loss, and caries, gingivitis, and periodontitis.5 The symptomatology of schizophrenia related to the use of antipsychotics is associated with poor tooth brushing and poor dental hygiene, which is in turn associated with a lack of interest in these behaviours. The side effects of psychiatric drugs are usually xerostomia, tremor at rest, facial rigidity, restlessness, nervousness, and insomnia.5 The symptomatology of schizophrenia and the use of antipsychotics is related to poor tooth brushing and poor dental hygiene. Other signs and symptoms commonly reported in patients with excessive drug use are bruxism, attrition, angular cheilitis, joint disorders, myofascial pain, periodontal disease, and masseteric hypertrophy.6 Histologically, issues include hyperotokeratosis, spongliosis, epithelial hyperplasia, melanic pigment, dilation of subepithelial vessels, hyperplasia of the endothelium, and chronic inflammatory infiltration.6,7 Torales et al concluded that gingivitis in drug-dependent patients is not always due to poor oral hygiene. It could be due to the drugs used and particularly smoking. The combination of alcohol, drugs, and tobacco aggravates the health of the oral cavity.8 Other lesions observed in drug addicts are aphthous stomatitis, frictional keratosis, candidiasis, tooth extraction scars, tongue depilation, angular cheilitis, ulcers, leukoplakia, mucositis, herpes, and papilloma.9

Preventing oral pathologies in narco-dependent psychiatric patients is critical. The community should provide them with preventive tools for oral hygiene. In terms of preventive health, there should be programmes for oral health and oral care for these patients and their families.10

Narco-dependent and psychiatric patients may be more vulnerable to oral diseases because of their emotional instability, which can lead to poor oral care and hygiene. The prevalence of oral manifestations in this case report included multiple cavities, xerostomia, plaque formation and tartar with severe chronic periodontal involvement. Decision regarding the choice of treatment is complex due to poor prognosis of most teeth having severe chronic periodontitis.