The artery of Percheron is a rare variant of the posterior cerebral circulation. It is characterised by a single arterial trunk that supplies blood to bilateral paramedian thalami and rostral midbrain. Its occlusion can have a very wide range of presentation, and initial imaging including CT of the head maybe normal. Diagnosis and eventual treatment is usually delayed. We describe the case of an elderly man who presented with loss of consciousness, aphasia, and bilateral lower limb weakness. He was diagnosed with bilateral thalamic infarction due to the occlusion of the artery of Percheron only after an MRI of the brain was performed. Despite treatment his symptoms did not resolve completely.

The artery of Percheron is a variant of the paramedian arteries. It arises from P1 segment of the posterior cerebral artery as a single artery and supplies blood to the bilateral paramedian thalamic nuclei and occasionally the rostral mesencephalon. Occlusion of the artery of Percheron can, therefore, lead to a bilateral paramedian thalamic infarct with or without involvement of the midbrain. Bilateral thalamic infarcts due to the artery of Percheron occlusion can present with a variety of clinical manifestations such as an altered mental status, increased somnolence, memory impairment, a vertical gaze palsy, aphasia, hemiplegia, movement disorder, cerebellar ataxia and even coma.1

Thalamic infarcts account for 11% of vertebrobasilar infarcts, of which 4-18% are due to the artery of Percheron occlusion and only 0.6% of cerebral infarctions are bilateral thalamic infarctions. Treatment consists of thrombolysis, heparin and long-term anticoagulation but the diagnosis of artery of Percheron infarct and eventual treatment is often delayed. This is often due to its wide range of presentation and the difficulty of diagnosing it on early imaging such CT of the head.2

Here, we report the case of a patient admitted to a major tertiary care hospital in Peshawar, Pakistan, who was diagnosed with bilateral paramedian thalamic infarct due to artery of Percheron occlusion. Written and informed consent was obtained from the patient for publishing the case.

A 65-year-old male presented in the emergency department at Khyber Teaching Hospital Peshawar, Pakistan, in May 2020, after he developed sudden onset of aphasia, followed by bilateral weakness of the upper limbs and loss of consciousness. On arrival, he had a Glasgow coma score of 7. Besides this, he was tachycardic with a pulse of 110 beats per minute. On examination, the patient was somnolent with exaggerated reflexes in bilateral upper extremity and bilateral downgoing plantars. The patient was not hypertensive, nor did he have any other comorbidities such as diabetes mellitus or hyper lipidaema. Rest of the history and physical examination was unremarkable. His 12-lead electrocardiogram (ECG) showed a right axis deviation and an abnormal rhythm. Echocardiogram reported right atrial and ventricular enlargement with moderate pulmonary arterial hypertension (PAH). A non-contrast CT scan performed in the emergency department did not reveal any changes.

The patient was admitted to the unit and his basic laboratory investigations sent. At that time, his lipid profile, electrolytes, liver functions tests, renal functions tests, and random blood glucose were all within the normal range. His ESR was raised to 55mm and on complete blood count (CBC) he had increased neutrophils (95.5%). Magnetic resonance imaging (MRI) of the brain was performed on the third day of admission that revealed high signal on T2 and fluid-attenuated inversion recovery (FLAIR) sequences in bilateral ventro medial thalami, rostral midbrain and right cerebellar hemisphere with corresponding diffusion restriction on diffusion weighted images (DWI). Posterior circulation infarct in the artery of Percheron territory was suggested. The patient was thus diagnosed with bilateral thalamic infarction due to artery of Percheron occlusion. 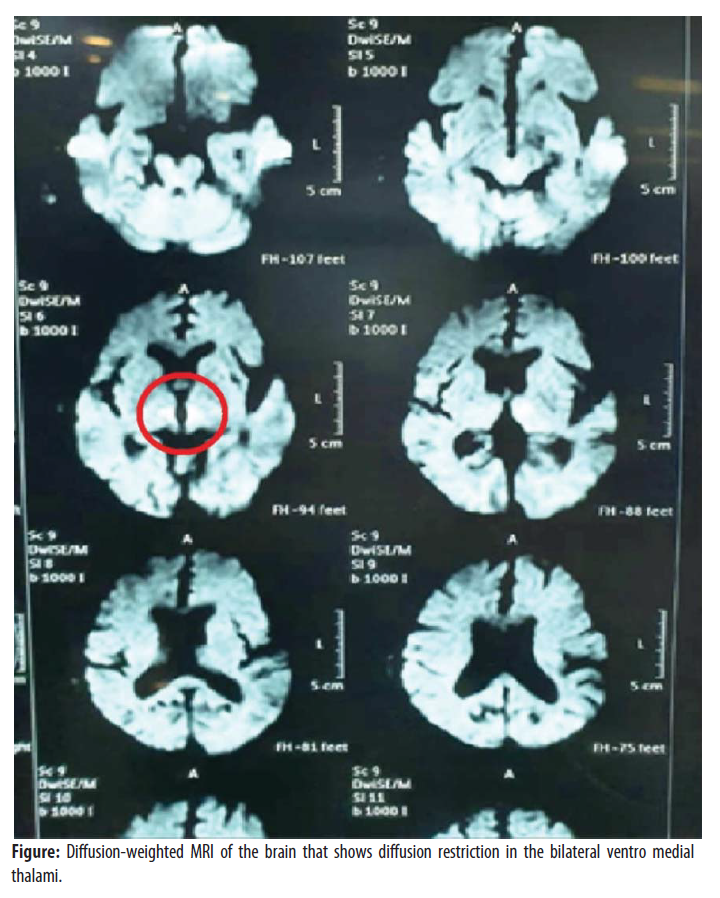 He was started on intravenous Dexamethasone and oral Aspirin 300mg. The patient showed signs of improvement and his GCS improved to 12/15. On discharge, all of the neurological deficits had resolved except for hyperreflexia of the bilateral upper extremity which persisted even at his one month follow-up

The inferolateral, polar, paramedian, and posterior choroidal arteries are the main arteries that supply blood to the thalamus. There is considerable variation in the territory supplied by each artery. Gerard Percheron described four variants of paramedian artery and one of them is the artery of Percheron.3 Normally, the mediodorsal and intralaminar thalamic nuclei and occasionally the upper brainstem are supplied blood by the paramedian arteries. Due to variations in blood supply and the many complex relay functions of the thalamus, the artery of Percheron infarct can have a very wide range of presentation and diagnosing it is therefore, a challenge. Vertical gaze palsy, alteration in consciousness levels and cognitive impairment are the typical features. Focal signs such as aphasia and dysarthria can also occur.3

There have been reports of various other presentations also, such as a case with bilateral incomplete external ophthalmoplegia and bilateral internuclear ophthalmoplegia. MRI of the cerebrum with angiography was performed which revealed bilateral paramedian thalamic infarcts involving the left hippocampus and infarcts in midbrain and right cerebellar hemisphere.4 Bradycardia and seizures have also been reported.5 The thalamus is a part of the reticular formation and the centrencephalic system; hence, its infarct can lead to loss of consciousness and seizure.6 Pseudobulbar palsy is another rare presentation that has been reported. Ventrolateral nuclei of the thalamus have connections with cortical area 4 and 6 as well as the cortical fibres of the face which are on the medial side. Bilateral lesion of these nuclei is speculated to be the cause of pseudobulbar palsy.7 Movement disorders such as tremors, parkinsonism, athetosis and myoclonus, though less common, have all been reported earlier.8

There are a number of differentials for patients presenting with sudden onset non lateralising neurological symptoms that are vague, such as Wernicke encephalopathy, basilar tip occlusion, intracranial haemorrhages, subdural haematomas, toxic and neoplasms, and inflammatory disorders. Bilateral paramedian Thalamic infarction should be also be considered as one of the differentials.9

CT of the brain and CT angiogram with perfusion should be performed for patients who present with non-lateralising neurological symptoms. Bilateral paramedian thalamic infarction should be considered if initial workup is inconclusive and the clinical features are far more severe than the findings on the CT scan. The proposed management for such patients includes performing CTA and MRI brain scan. MRI of the brain should be limited to diffusion-weighted images (DWI), gradient echo sequences (GES), and apparent diffusion coefficient (ADC) series. If the patient is still in the therapeutic window and MRI findings are positive, IV tPA (tissue plasminogen activator) should be administered. Delay in diagnoses results in a subsequent delay in treatment and this can affect the overall prognosis. Thalamic infarct should be kept in mind in patients with otherwise unexplainable neurological presentations and at the same time the threshold for performing MRI should be lowered in such patients.9

Bilateral thalamic infarct due to occlusion of the artery of Percheron has myriad of clinical manifestations. In a case with no obvious cause for sudden loss of consciousness, occlusion of the artery of Percheron should be considered as one of the differentials. Prompt diagnoses and treatment can play a crucial role in the recovery of the patient. When suspected, CTA and MRI can help in the timely diagnosis of the disease.

Disclaimer: The case report has not been previously presented or published in a conference. It is not part of a research or Ph.D. thesis.

Effects of drug abuse and mental disorders on oral health: A case report