Awareness about sexually transmitted diseases in women related to their age, education and income

This study was conducted to assess the level of awareness about sexually transmitted diseases in females of different age groups and to investigate the role that education and social status may play in their knowledge.

It was a cross-sectional study, conducted at the CMH Lahore's Gynaecology and Obstetrics out-patient department, from June 2019 till July 2019.

Three hundred and thirty-seven participants were interviewed, after obtaining a written informed consent. These participants were females who presented at the CMH Gynaecology & Obstetrics OPD, with any particular complaint. Those who did not give consent were not included in the study. The participants were given a hard copy of the questionnaire to fill and any queries that they had were answered on the spot.

Data was analysed using SPSS version 23. Of the 337 participants interviewed, 158 were aged 26-35 years; 71 were undergraduates and 99 had completed post graduate studies. To determine their socioeconomic status, they were asked about their family income; 205 participants belonged to families with an income of less than Rs50,000. Most participants (229) had presented to the OPD for a routine pregnancy check-up.

Of the 337 participants, 244 attested to know about STD's and the most common source of their knowledge was through TV (142), followed by the internet (137); 251 participants were familiar with limited STDs such as AIDS and Hepatitis B.

The study showed that age, level of education, and income have a profound effect on the knowledge regarding sexually transmitted diseases amongst the women in Pakistan.

Sexually Transmitted Diseases remain one of the most persistent problems faced by humans. Their significance can be assessed by their inclusion in the United Nation's sustainable developmental goals.1 The prevalence of STDs in Pakistan is apparent as currently Pakistan has 25,000 registered cases of AIDS alone.2  Vaginal discharge remains one of the most frequent presenting complaints in the gynaecology OPDs.

The number of patients becoming infected is escalating worldwide and developing countries like Pakistan, where STDs are still considered a social taboo and are not openly discussed especially amongst women, who are at a higher risk of acquiring the infection.5  STDs are more widespread than the attention they garner. A 2008 study showed a prevalence of 4.4% amongst men.6 There is still insufficient data regarding prevalence amongst women.6,7 Furthermore, standardised guidelines are rarely followed for the treatment of STDs, and testing for asymptomatic infections such as HIV or syphilis is rare, as is the counselling or patient management.

The importance of STDs cannot be undermined. There has been a reported 22% increase in deaths from syphilis worldwide.8  In 2017-18, research was conducted to evaluate the number of STD cases and it was noted that as compared to 2014 there was a 71% increase in cases of primary and secondary syphilis and an alarming 185% increase in congenital syphilis. Chlamydia has increased by 19% since 2014 and Gonorrhoea by 63%.9  In Pakistan, by 2019, more than 400 people had tested to be HIV positive entirely due to unsanitary equipment and hospital malpractice.10

Every STD has its own clinical presentation and clinical course. The patient may be completely asymptomatic or may present with a spectrum of clinical features. The most commonly observed symptoms in infected individuals include fever, genital rash and bumps, weight loss, painful intercourse and urination (as in chlamydia and gonorrhoea), vaginal discharge, inter-menstrual, and heavy menstrual bleeding.11,12 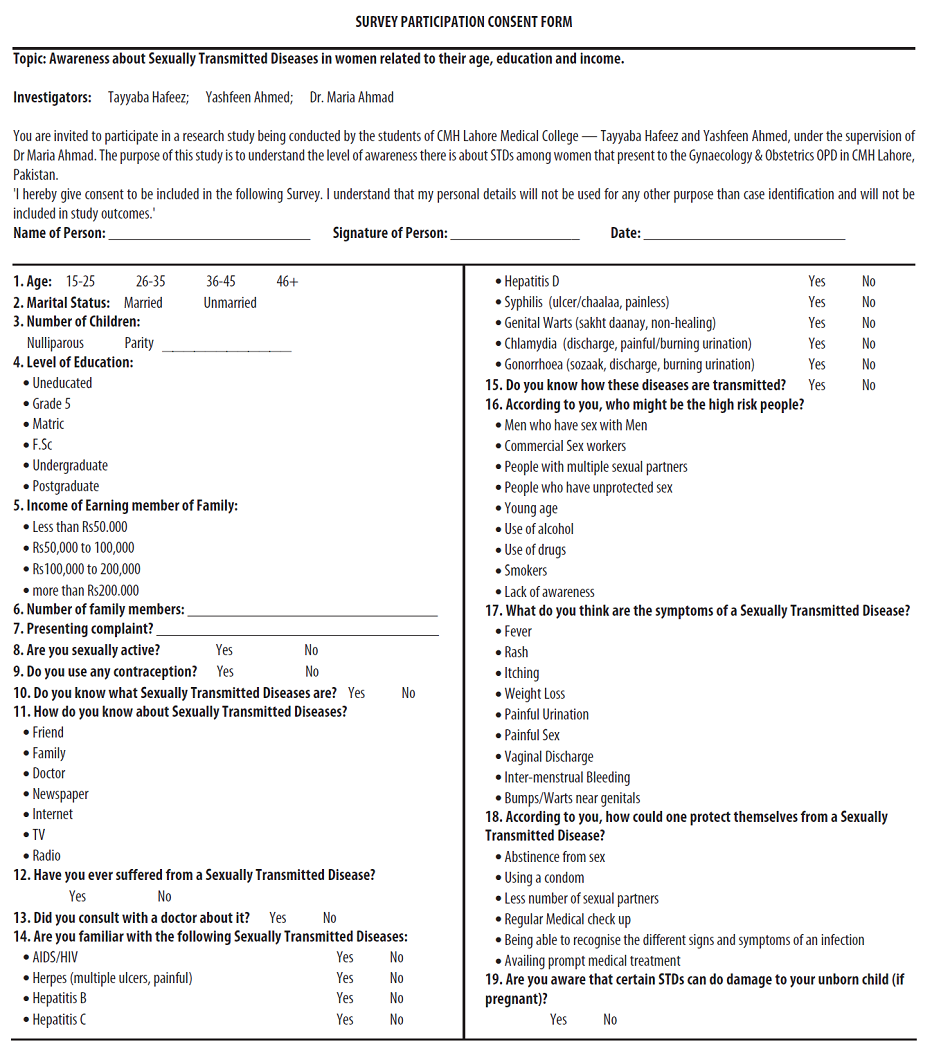 The objective of this research was to understand the level of awareness about sexually transmitted diseases in women who presented to the gynaecology and obstetrics out-patient department, and how their age, level of education, and family income might influence this knowledge, as the prevention and control of STDs are based on education, counselling, and awareness.13,14

It was a cross-sectional study, conducted in the Gynaecology and Obstetrics OPD of CMH Lahore, from June 2019 to July 2019.

Female patients who presented to the CMH gynaecology and obstetrics OPD, for any particular reason, during the set time period were included in the study. A written informed consent about participating in the research was obtained. Anyone who did not give the consent was excluded.

Participants were given a printout of the questionnaire individually and were asked to fill it in. Any queries and questions they had were answered on the spot.

Ethical approval was obtained from the ethical review committee of CMH Lahore Medical College and they expressed no objection to the research.

There is a shockingly low amount of literature available relating to awareness about sexually transmitted diseases despite high prevalence in our society. Due to a low literacy rate, inadequate health budget, and inhibitions in our country, people do not understand the nature of the disease, its aetiology, risk factors, and consequences. Our research focused on correlating these factors with the knowledge about STDs, specifically age, educational status, and income. 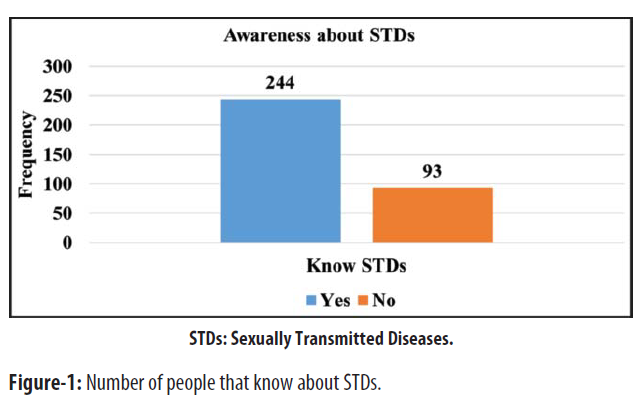 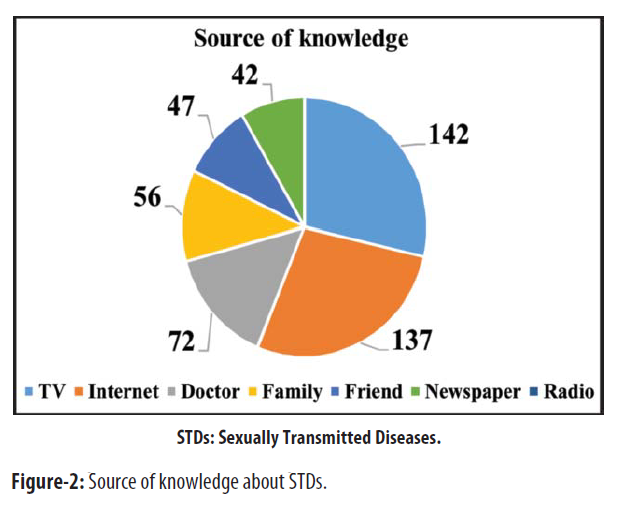 Of those who were aware, 124 (36%) belonged to the age bracket of 26-35, and amongst those who did not know, 49 (14.5%) were under the age of 25. Statistical analysis of the compiled data gave a Pearson chi square value of 0.047 which shows a significant correlation between age and knowledge regarding STDs. (Table-1)

The second variable under scrutiny was education. There is low literacy among general public, especially among women. A general trend emerged through our research that the more qualified the individuals were, the more they knew about STDs. The biggest fraction of the participants were undergraduates or postgraduates. Sixty three of the 71 undergraduates (88% of undergraduates) and 93 of the 99 postgraduates (94% postgraduates) had sufficient knowledge regarding STDs. In the uneducated group, 18 out of 28 (64% of uneducated) were completely unaware of STDs. The calculated Pearson chi square value was 0.001 and this statistically proves a positive association between this variable and the level of knowledge regarding STDs (Table-2).

The next variable that was considered while judging whether a relationship exists between social status and the level of knowledge regarding STDs was the family's monthly income. As per our results, a higher income was associated with greater level of knowledge about the said topic. Out of 205 who belonged to families earning less than Rs50,000 per month, 119 were aware of the STDs (58% of income less than 50,000). In the next category of Rs50,000-100,000, 75 out of 82 (91%) had some knowledge. All the 36 (100%) those who belonged to families earning Rs100,000-200,000, knew about STDs, while all 14 (100%) families that earned more than Rs200,000 had a good knowledge about it. This positive association is statistically proven by the Pearson chi square value of 0.001.

Most of the participants interviewed, i.e. 229(68%), came for a routine pregnancy check-up. The second most common complaint — in 25 participants (7%) at presentation was irregular menstrual cycle. This was followed by family planning, 21(6%) and then regular gynaecological check-up 11 (3%). Other complaints were of abdominal pain, genital tract infections, post-op follow-ups and miscarriages.

Certain factors are associated with an increased risk of being infected with a venereal disease: 178(53%) knew that having multiple sexual partners is one of the factors, 150(44.5) participants also recognised sex workers as a risk factor, followed by lack of knowledge or illiteracy, 146(43%). 122(36%) were aware that unprotected sex also plays a part, 109(32%) agreed to the contribution of illicit drugs, and 94(28%) also recognised homosexuality as a possible factor. A total of 88(26%) participants believed that alcohol may also be responsible, 57(17%) thought the same regarding smoking, while 55(16%) believed that a young age or immaturity may also be responsible.

STDs may go unnoticed and be asymptomatic or they may present with a wide spectrum of symptoms. As many as 114(34%) participants knew that there is an associated fever, 105(31%) were aware of a rash appearing, and 103(30.5%) also knew of itching; 94(28%) females agreed that genital warts or bumps may appear, 88(26%) thought that sex would be painful, 86(25.5%) knew that an abnormal vaginal discharge could point towards an infection, 85(25%) also agreed to urinary symptoms; 78(23%) females considered inter-menstrual bleeding as a symptom and 71(21%) females said that the infection could also be associated with weight loss.

When the participants were inquired about their knowledge of preventative measures, 153(45%) said that regular medical check-ups could prevent STDs, 129(38%) believed that the number of sexual partners should be limited, 127(38%) thought that prompt self-recognition of the signs and symptoms related to STDs could prevent or halt the disease (Figure-3). 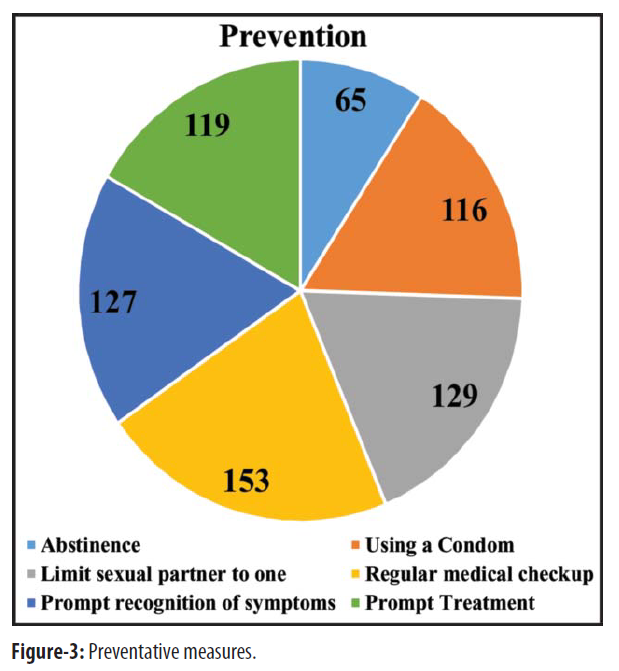 Age, level of education, and social status/income have a profound effect on the knowledge regarding sexually transmitted diseases amongst the women in Pakistan. The younger generation being more technologically aware is generally more knowledgeable about the problems bought upon by STDs. Naturally, education also has a direct impact on the level of awareness with the more educated lot more exposed to issues such as these and the same can be said about the females belonging to a higher income category that they are more aware.

It is imperative that in order to reduce the high number of cases work must be done to generate mass awareness about STDs. As per the data obtained in this research TV is the best way to generate awareness.

Sibutramine and its cardiovascular effects: A deadly combination