Flow replacement cerebrovascular bypass in the management of skull base meningiomas

Meningiomas are common skull base lesions that are often in the vicinity of the internal carotid artery and its major branches. Their growth compresses, occludes or invades these vessels. Although most of the lesions can be carefully dissected from the vessels, a vascular bypass and sacrifice of the vessel may be necessary to achieve complete excision or prevent ischaemic complications from vessel manipulation. These procedures require considerable planning and skill and their use is quickly waning in the face of improving modalities for managing small residual meningiomas in inaccessible locations.

The first intracranial bypass was described by Yasargil and Yonekawa in 1976.1 The vast majority of cerebrovascular bypasses are performed for flow augmentation in diseases such as Moya Moya disease, which cause impaired blood flow to the brain. Flow replacement bypasses are required when proximal vessel sacrifice is unavoidable. This is commonly done for trapping complex aneurysms or to allow total resection of lesions incorporating important vessels.2  It should be noted that there is currently no level 1 evidence for the use of extracranial-intracranial (EC-IC) or intracranial-intracranial (IC-IC) bypasses for any indication due to a lack of well-designed studies. However, their effectiveness is without question for preserving blood flow where needed, in carefully selected patients. Meningiomas are one of the most common skull base tumours that grow slowly and involve the vasculature around them. They can cause extrinsic compression and occlusion or invade the vessels themselves. In certain cases, patients may benefit from flow replacement or augmentation bypasses in an attempt to achieve complete excision of lesions invading vessels or to preserve good distal blood flow.3

Meningiomas are mostly benign lesions (except grade II and III) that are found in a variety of intracranial locations with some locations being closely associated with major vessels (Figure). 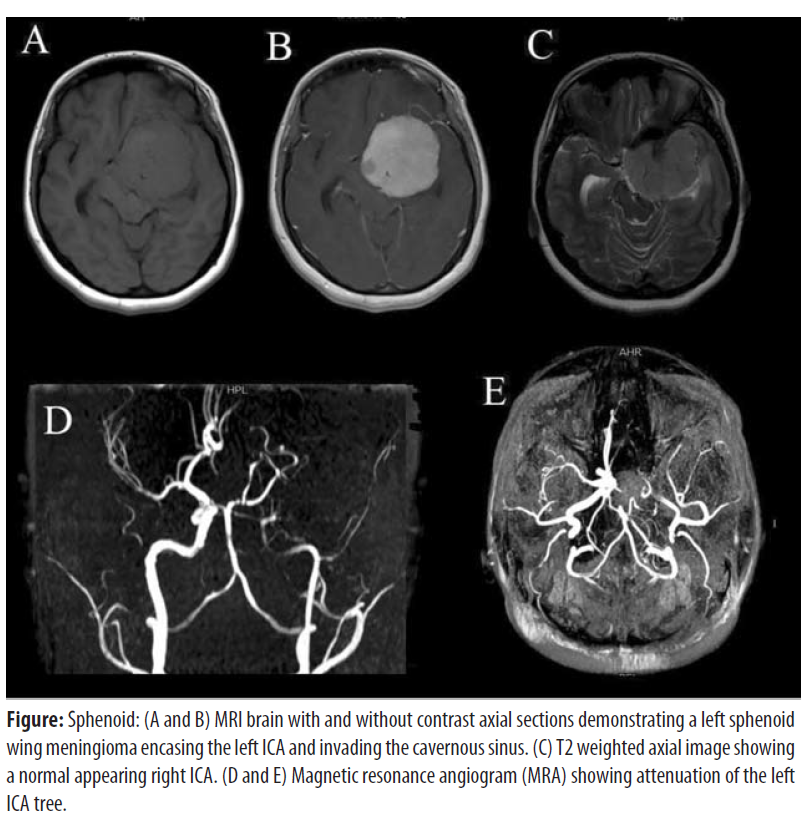 This includes the sphenoid wing, clinoid, cavernous sinus, petroclival, cerebellopontine angle and foramen magnum meningiomas. In these regions, meningiomas will compress, displace, occlude or invade major vasculature. The vascular insufficiency from this involvement may not be evident in many patients but it prevents radical resection of these lesions and may also result in spasm from vessel manipulation during surgery which may have devastating consequences. The likelihood of complications from this association is difficult to predict.4  Preoperative imaging including CT angiography and digital subtraction angiography will demonstrate attenuation of vessels but cannot predict the intraoperative course of things as the tumour may be relatively easily peeled from the vessels in certain cases while it may be adherent in others.

The use of a replacement bypass may prevent ischaemic complications from possible spasm or allow more radical resection of these tumours. It is important to understand that the vast majority of these lesions will not require any bypass. Moreover, current advances in radiation (stereotactic radiosurgery) for small residual disease may obviate the need for radical excision and its associated risks. Patients with higher grade tumours who may benefit from more radical excision may be better candidates for a bypass however higher grade does not always correlate well with recurrence risk.5  Candidates for bypass include tumours that completely encase the internal carotid artery (ICA), lesions that narrow the lumen, lesions that are recurrent or have been irradiated already and higher grade lesions that are unlikely to be completely resected without vessel sacrifice. A balloon occlusion test (BTO) may help with determining collateral flow that would compensate for vessel sacrifice however ischaemic complications may still occur despite adequate appearing collaterals. Other factors that should be considered are the general condition of the patient, fitness for such surgery and the risk of ischaemic complications from surgery vs risks from the bypass procedure itself. It is also recommended to perform bypass and resection as a staged two day procedure to prevent surgeon fatigue and also to confirm graft patency with angiography prior to vessel sacrifice.6  Flow replacement needs a high-flow bypass (ECA-RAG-MCA) while augmentation may be performed with a low-flow bypass (STA-MCA).

Some surgeons offer a bypass to every patient who may require vessel sacrifice intraoperatively. Yang et al., used this approach in a series of 18 patients with 8 of them for meningiomas. Their graft patency rate was 100% while they did not report results separately for meningiomas in terms of resection percentage, outcome and complications. However the overall complication rate in the series was 44% with one death following aspiration.7  Couldwell et al., describe good long term patency in their 11 patients at a mean follow up of 56 months but only two cases were meningiomas (one had patent bypass at 34 months and one death at 2 months due to pneumonia).8  This strategy has also been employed in paediatric patients.9

Cavernous sinus meningiomas are more often treated with stereotactic radiosurgery (SRS) rather than surgery. There have been rare reports of post intervention ischaemic complications or asymptomatic narrowing of the encased ICA. Corniola et al., have described a case of transient ischaemic attacks in a 53 year old lady who underwent SRS for a left cavernous sinus meningioma two years prior. She underwent a left STA-M4 low flow bypass for management of her symptoms after conservative management with anti-platelets failed. Their review showed 3 cases (0.035 of the entire cohort) who underwent post treatment ICA occlusion with two cases resulting in stroke while one was asymptomatic.10

Skull base meningiomas may involve important vasculature that may be sacrificed following a bypass procedure to allow radical excision in carefully selected individuals. In the era of newer modalities and data supporting good outcomes with maximum safe resection, this option is becoming less relevant.