Objective: To report outcomes of 27 gauge pars plana vitrectomy for the management of a variety of simple to complex posterior segment disorders.

Conclusion: The 27 gauge pars plana vitrectomy was found to be a safe and effective procedure for both simple and complex retinal pathologies requiring significant surgical manipulation.

Following the notion of ‘smaller is better’, micro-incision vitrectomy system (MIVS) comprising 23 gauge (G) and 25G pars plana vitrectomy (PPV) system has transformed the field of surgical retina in terms of reduced operating time, speedy wound-healing and less post-operative inflammation with early visual recovery.1-8 Further advancements in instrumentation and technology lead to the introduction of suture less 27G PPV system in 2010.9 Since its introduction, its practicality and safety are being assessed for a variety of vitreoretinal pathologies all over the world. However, previous studies are limited by their small sample size and focus on simpler pathologies. There is only one study which explored the utilisation of this system for a wider range of vitreoretinal pathologies, but it was limited by the inclusion of outcomes of multiple surgeons.10

To the best of our knowledge, no study on utilisation of 27G MIVS in complex cases has been done in our part of the world. The current study was planned to fill the gap by sharing our experience with 27G PPV for a broad spectrum of vitreoretinal disorders, from simple and complex.

This retrospective cohort study was conducted at the Shifa International Hospital, Islamabad, Pakistan, and comprised data of all patients who underwent 27G PPV between July 1, 2015, and June 30, 2019, for a variety of indications. After approval from the institutional ethics review board, patients were identified from coding used for 27 G PPV surgery. All the surgeries had been performed by a single vitreoretinal surgeon. Data noted include age, gender, laterality, diagnosis, pre-operative visual acuity (VA), date of surgery and surgical details, including operating time and complications. Any further procedure was aso noted and best corrected VA (BCVA) was assessed at 3 months. Hypotony was defined as new onset intraocular pressure (IOP) of 5mmHg or less on any post-operative period, while IOP was said to be raised when it exceeded 21mmHg on any post-operative visit.

Type of anaesthesia varied according to the age and preference of patients. Patients aged <15 years were operated under general anaesthesia (GA).  In others, modified retro bulbar anaesthesia (1% lignocaine and 0.5% bupvicaine) was utilised which was supplemented by sub tenon block (0.5% bupivicaine) when required during surgery.

Surgical manoeuvres varied according to the diagnosis and extent of pathology. Eyes scheduled for concurrent phacoemulisification had their cataract extraction with IOL implantation prior to the insertion of trocars. All cataract surgeries were performed via 2.2 mm clear corneal incision. PPV was done in all the eyes using 27G 3PPV Constellation Vitrectomy system (Alcon Laboratories, Fort Worth, TX, USA). For fundus visualisation, noncontact wide-angle viewing system (BIOM, Oculus Inc., Wetzlar, Germany) was used. A magnifying contact lens for epiretinal membrane (ERM) or internal limiting membrane (ILM) peeling was utilised where view was compromised in a few cases. In all the eyes, trocar cannulas were inserted using the angled approach (~15-30° angle to the sclera) and were placed in the standard inferotemporal, superotemporal and superonasal quadrants. All 27G instrumentation and accessories, such as endolaser, forceps, extrusion etc., were used. Dropped lens matter was removed using 27G cutter, while 2 of the dislocated mature cataractuous lenses were removed via 20G fragmatome by enlarging one port.

Ocular tamponade agents, like (air, sulfur hexafluoride (SF6) gas, hexafluoroethane (C2F6) gas, octafluoropropane (C3F8) gas and silicone oil (SO), were used as per the complexity of the disease. Suturing of the sclerotomy sites with 6-0/ 7-0 Vicryl was done in cases with persistent wound leakage after the massage and in those with SO tamponade (1000 centistokes). In every case, sub-conjunctival antibiotic (gentamycin) and corticosteroid (dexamethasone) was injected at the end of the procedure. In eyes with endophthalmitis, intravitreal and intracameral injection of antibiotics or antifungals were also injected.

Data was analysed using SPSS 21. For qualitative variables, frequencies and percentages were used, while mean and standard deviations were calculated for quantitative variables. Mean BCVA before and after the procedure were compared using paired-t test. P≤0.05 was considered statistically significant. For statistical analysis, Snellen’s VA measurements were changed to logarithm of minimum angle of resolution (logMAR) equivalents. Counting fingers and hand movement vision was converted to 1.98 and 2.28 respectively according to the method described in a study using Freiburg visual acuity test (FrACT).11 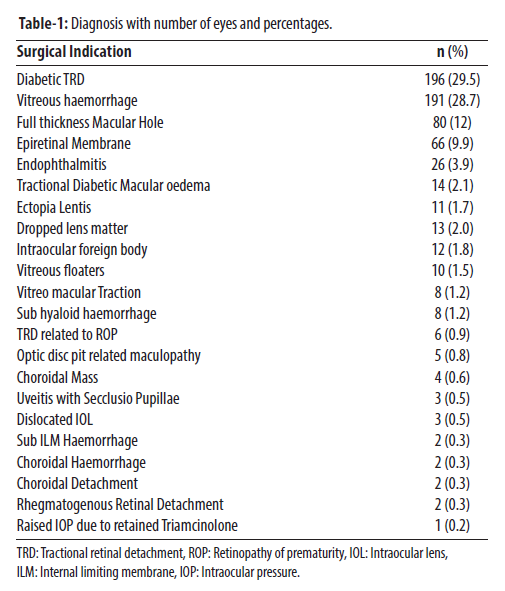 Mean BCVA improved significantly from 1.62± 0.68 logMAR to 0.4±0.38 logMAR (p<0.001). VA in TRD related to retinopathy of prematurity [ROP] 6(0.9%) eyes and uveitis with secclusio pupillae in a 2-year-old subjects 2(0.3%) eyes could not be assessed. Also, 6(0.9%) eyes had light perception VA which could not be quantified. Of them, 2(33.3%) eyes were with endophthalmitis, and 1(16.6%) each was with open globe injury, choroidal melanoma, choroidal haemorrhage, choroidal detachment. Mean BCVA for each diagnosis before and after surgery was compared (Table 3). 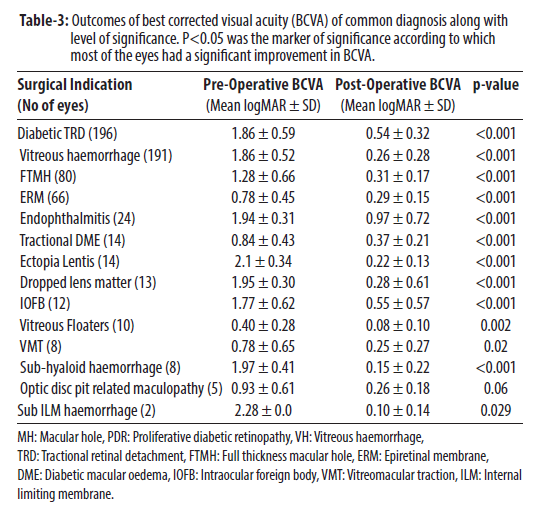 The introduction of 23G and 25G MIVS has largely replaced the conventional 20G instrumentation in the past few years. With further advancements, 27G PPV was initiated by Oshima et al.9 in 2010. Since then, different studies have assessed its safety and feasibility in various posterior segment diseases. Some studies have established its advantages in terms of wound integrity and decreased post-operative inflammation1-8 while there are certain concerns related to the friability of its instruments and wound leak.12-14 In the current study we shared our experience with 27G PPV system for a variety of pathologies.

Indications of 27G system are extending day by day with surgeons’ confidence and experience. Studies that have been done with limited specific pathologies and with mild to moderate levels of complexity (Table 4).

The current study went a step further and used the system for far more complex disorders.

In diabetic TRD, we found the instruments rigid and manageable enough to be able to peel the thick fibro-vascular membranes and perform the required procedures conveniently in contrast to Yoneda et al.17 who found these instruments to be friable. Khan et al.10 also found the instruments of 27G adequate enough for the peeling of PVR in RRD. We used 27G MIVS in a few cases of RRD as we wanted to continue using 25G MIVS for our convenience in such cases. Even for advanced ROP, we found the 27G instrumentation to be efficient enough, as pointed out by PK Shah et al. in 2018 as well.19

To our knowledge, none of the previous studies have utilised 27G instrumentation for complex traumatic cases with retained IOFB.  Li et al.16 in their study rejected 27G system for IOFB and dislocated lens. However, in the current study, in all the 12 eyes, IOFB was safely removed and outcomes were found to be favourable. We also found this system to be convenient in 8 eyes with dislocated lens, as previously reported by Khan et al.10

The 27G PPV system has been utilised for choroidal mass biopsy in previous studies as well20,21 and we also had a satisfactory experience in all the 3 eyes. In one eye with biopsy-proven medium-sized posteriorly-located choroidal melanoma, we used this system for its primary endo resection and with 3-month follow-up we did not find any recurrence. In 2017, Vidoris et al.22 used 23G PPV for the endo resection of choroidal melanoma in eyes that refused enucleation, and plaque radiotherapy was not feasible. They found endo resection to be an acceptable alternative to enucleation even with long-term follow-ups. However, with the use of smaller gauge instruments in the current study, long-term outcome is yet to be assessed.

Although Oshima et al.9 reported adequate rigidity of 27G instrumentation, they described its use to treat simpler retinal pathologies. We found this system to be effective in complex cases as well. We also found 27G forceps to be rigid enough to aid in the suture-less scleral fixation of IOL with minimal trauma to the surrounding tissues. For SO injection, we used 25G trocar to enlarge the previously created scleral tunnel due to unavailability of 27G viscous fluid injection (VFI) cannula for SO injection. However, Khan et al.10 used 27G for SO injection and found it quite feasible.

Two RRD eyes in the current study were successfully managed with further surgery. Other than supra choroidal SO migration, no serious complication was noted per-operatively. This is attributed to incorrectly-placed VFI cannula without using trocar. It was later managed successfully by 25G assisted supra choroidal oil drainage. In all the eyes, we used angled approach for trocar cannula insertion instead of the traditional straight approach described by Oshima et al.9 and we found this approach to be related to no case of post-operative wound leak or hypotony which is reported to be 5% and 0% in 3 previous studies.7,10,15,16 We also encountered a case of endophthalmitis in an eye operated for tractional diabetic macular oedema. Vitreous cultures showed no growth, and the eye responded well to intravitreal antibiotics. Overall, post-operative complication rate in our study was 2.1% with ocular hypertension being the most common one (7 eyes, 1%). None of these eyes required a secondary IOP controlling procedure.

We had favourable anatomical and visual outcomes in the study. Eyes with diabetic TRD achieved a primary anatomical success rate of 98% which was better than the 90% success rate with 25G previously.23 Three per cent eyes with vitreous haemorrhage (VH) had recurrence or persistent haemorrhage in the post-operative period that is comparable to previous finding.16 Besides, 92% was the rate of MH closure after primary procedure, and 100% after extension of positioning in 3 eyes and a secondary procedure in another 3 eyes comparable to 25G system.24 ERM, vitreomacular traction, dropped lens matter, uveitis and other pathologies had comparatively favourable outcomes as well. Reasonable outcomes were encountered mostly in eyes with endophthalmitis. Negretti et al.25 has recently published the results of 23G PPV in endophthalmitis and has found post-operative rate of RRD to be 24.2% and rate of evisceration to be 6%. They have also reported 3% MH, 6% hypotony and 3% risk of supra choroidal haemorrhage in their study. Considering our results with a comparable sample size to this study (33 eyes in the study by Negretti et al.25) we can conclude that 27G is perhaps better in terms of safety in eyes with endophthalmitis. BCVA improved from 1.62±0.69 logMAR to 0.4±0.38 logMAR at 3-months follow-up and is expected to improve further with time.

Mean operating time in our study was 62 minutes and was longer than the mean published by previous studies (34.3 min,9 49.8 min16). It can be explained in terms of dealing with more complex procedures, performing simultaneous cataract surgery and changing a trocar for SO injection. However, with the introduction of 10,000 cuts per minute cutter, the mean operating time is now reduced due to better efficiency.

The current study has limitations due to its retrospective nature and the absence of a control group.

Disclaimer: The text was presented at the 38th Lahore Ophthalmological Conference, held in December 2019 in Lahore, Pakistan.