Tricuspid valve myxoma: An uncommon presentation of a common tumour

Amongst the benign cardiac tumours, atrial myxomas are the commonest. Tricuspid valve attachment is an uncommon site for cardiac myxoma. Here we present the case of an 18-year-old girl who presented with a history of shortness of breath, abdominal distension, leg swelling, palpitations and dizziness for the past two months. On echocardiography, there was a large pedunculated mass attached to the tricuspid valve. She underwent surgical excision of the mass and biopsy confirmed the diagnosis of myxoma.

In conclusion, myxoma originating from tricuspid valve is a rare tumour, which can cause tricuspid valve obstruction and right heart failure symptoms due to their location. In these cases, shortness of breath, embolisation and symptoms of venous congestion are commonly observed.

Myxoma is the commonest type of adult primary heart tumour.1,2 Most of the myxomas arise sporadically (90%), and only about 10% are inherited.3 Around 8% of myxomas are present in the right atrium,4 while the majority are seen in the left atrium. Tricuspid valve myxomas are extremely rare, except for a few case reports.

An 18-year-old girl presented in the out patient clinic of Punjab Institute of Cardiology, Lahore on 24th of February 2020. She had history of palpitations and shortness of breath with bilateral leg swelling and abdominal distension for the last two months. She also had syncopal episodes for the last two weeks at a frequency of two to three episodes per week. She was normotensive and had no history of any systemic disease or any surgical intervention. Her symptoms aggravated during the last two weeks when she started having episodes of dizziness followed by brief spells of loss of consciousness. She consulted local practitioners and different medications including anti tuberculous treatment were prescribed, but there was no improvement in her symptoms.

On presentation to our outpatient clinic, she was vitally stable. She had prominent neck veins, pedal oedema, ascites, and palpable liver below the costal margin. On auscultation an additional heart sound (tumour plop) was audible, the rest of the examination was unremarkable. 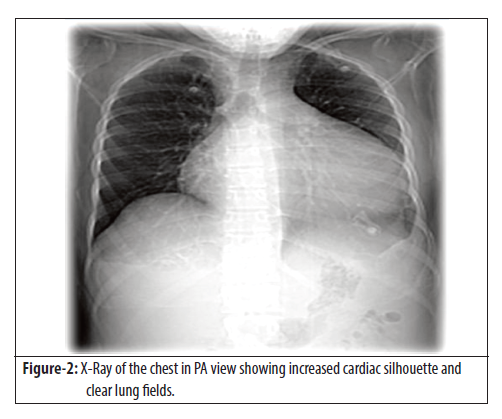 Biochemical laboratory tests were normal except for raised ASO titre and CRP with INR of 1.6. 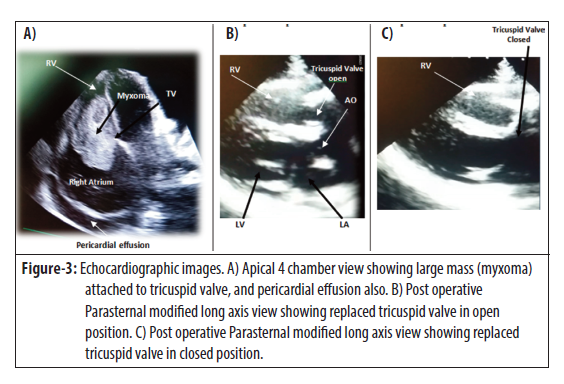 RA was dilated (52mm), whereas RV, LA, and LV were small sized. The RV was also full of the mass. Moderate pericardial effusion was also present.

Cardiac CT (Figure-4A) showed a large heterogeneous mass attached to the tricuspid valve moving to and fro into the RA/RV and RVOT with dilated RA.

SVC, IVC and pulmonary arteries were devoid of any mass. Pericardial effusion was also noted (Figure-4B). 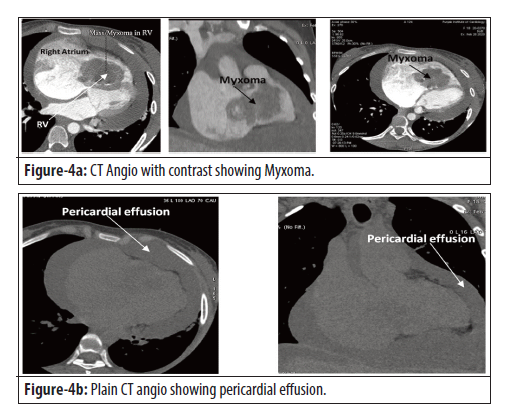 She was referred to the cardiac surgery department for excision of the mass. Per operatively the mass was found to be attached to the posterior leaflet and part of the septal leaflet of the tricuspid valve (Figure-5).

Tricuspid valve was excised along with the mass and replaced with 29mm St. Jude Biocor tissue valve.

Surgical removal is the only treatment of choice for myxomas. Complete removal of the tumour is vital to cure the disease. To prevent the recurrence of myxoma the tumour is removed with a large resection including the area where the pedicle is attached.

Excision was successfully done without any complications. Myxoma and its nature was confirmed on biopsy. The patient remained stable after the procedure. On her follow-up visits, she is doing well.

Myxoma is the commonest type of adult primary heart tumour.1,2 The recurrence rate of sporadic tumours is very low, i.e. about 0-3%.5 The mortality rate in surgery is less than 5% in multiple series. The post-operative survival rate is high.6

Two-dimensional echocardiography is used to confirm all myxomas. Advanced imaging techniques such as CT and MRI can also be employed as additional diagnostic tools. Differential diagnosis of myxoma includes lymphomas (primary cardiac and B cell), sarcomas7-9 and also mural thrombi. Myxomas are not commonly seen in the right heart; the symptoms are generally due to compromised blood flow across the tricuspid valve. Due to obstruction in the inflow, patients may present with postural syncope, oedema, hepatomegaly and ascites. The patient may present with recurrent pulmonary emboli and pulmonary hypertension.10 While dealing with the patients of tricuspid valve myxoma, valve repair or replacement have to be done concomitant with tumour excision, as was done by Hattori et al in his case report.11

Port-access approach was used by Yusan et al12 as an alternative to conventional open heart surgical technique. Both approaches have their own advantages and disadvantages but open surgical technique has potential of complete excision of the tumour and valve replacement / repair if deemed necessary.

In our patient, the clinical findings and investigations led to the diagnosis of tricuspid valve myxoma which is an uncommon location of this common benign cardiac tumour. Generally, the myxomas are attached to inter atrial septum whether on the left side or on the right side. This case was peculiar in the sense that the stalk of myxoma was attached to the posterior leaflet of the tricuspid valve.

Myxoma originating from tricuspid valve is a rare tumour which can cause tricuspid valve obstruction and right heart failure symptoms due to their location. In these cases, shortness of breath, embolization and symptoms of venous congestion are commonly observed. Tricuspid valve resection and replacement is a reasonable approach for complete cure of patient.

Informed Consent: Informed consent was taken from the patient for publishing her case.