Prevalence, triggers and presentation of migraine among the college and university students: Review of the available literature

Migraine is a type of headache associated with causing disability. It is considered the third main cause of disability among individuals aged <50 years. Environment around us does play an essential role in triggering the symptoms of migraine. The painful episodes can be prevented by adopting certain lifestyle changes, affecting the daily life activities of students. In the current narrative review, literature was searched on Google, Google Scholar and PubMed databases from 2015 to 2020. Migraine pain was found to be prevalent at different severity levels among college and university students, being more common in the females compared to the males. Identifying triggers is an essential feature in identifying and thus preventing the severity of migraine. As the disease affects the quality of life of students, it is essential to create more awareness so that students may approach physicians and maintain undisturbed focus on their academics.

Migraine is a type of headaches and is considered a source of disability among the affected individuals.1,2 This public health problem affects 10% population.3 A study regarded migraine as the first cause of disability among the individuals aged <50 years.4 A study documented dysregulation in the sensory pathway from brain as a cause of migraine pain.5 A study identified genetic linkage to the occurrence of migraine.6 One study documented that family history was positive in males.7 A study documented that migraine pain was two to three times more common in females than males.8 Another study also documented the association of female gender with migraine; 64% females and 36% males presented with migraine symptoms.9 The disease presents more severely in terms of neurocognitive deficit in females compared to males.10 Another research mentioned the decrease in cognitive function in patients during a migraine episode.11 The frequency of migraine per month was reported significantly higher in females than males.12 The duration of migraine lessens with increase in age. Migraine usually starts in individuals in their teenage and when they are in their 20s.13 The disease is found to be more common in the age range of 20-40 years.14 There is variability in the presentation of migraine in between its two types; migraine with aura, and the one without aura. Patients with aura present with neurological symptoms.3 The symptoms episode is associated with increased amplitude of frequency in the fronto-parietal region of brain.15 A study documented that in migraine patients without aura, cerebellum and braistem activity were associated with microstructural changes.16 A study revealed that female migraineurs are at high risk of developing vascular diseases and ischaemic stroke.17

There are many factors that act as triggers in patients with migraine. A study revealed that sleep disturbances were one of the triggers for migraine occurrence. Female university students suffering from migraine complained of disruption in sleep, day-time somnolence and inadequacy of sleep.18 A study in Karachi mentioned mental stress and anxiety as the main triggers among the medical students. The main risk factors that were identified by the students were stressful study schedule, lack of time management, long commute and disturbing surrounding noise.19 Another study revealed that stress, lack of sleep, travelling and reading contribute to the occurrence of migraine.20 Another study reported increased level of stress in migraine patients compared to the controls.21 Migraineurs are sensitive to the surrounding stimuli. A research reported that 80.4% of individuals were sensitive towards light and noise.20 Migraine affects the activities of dailylife (ADLs) and routine lives of the individuals suffering from this disabling disease. A study revealed that migraineurs had difficulty in performing the assigned tasks.22 Another study mentioned irritability and overwork to be statistically significantly related to migraine occurrence among the medical students.23 Migraine can affect quality of life (QOL) and relationships as well as has impact on the academic performance of students. The disease negatively affects the academics of the students and the resulted in absenteeism in 63.8% students.24 Another study also revealed that migraineurs’ interpersonal lives and academics were severely affected due to the painful episode of pain.22 A study revealed that only 3% students sought professional help for treating the migraine pain while the majority use over-the-counter (OTC) medicines, like acetaminophen, for relief of pain.19 Keeping in mind the relevance of migraine and its impact on the lives of students, the current narrative review was planned to ascertain the prevalence of migraine among college and university students, common symptoms, triggers and the coping strategies adopted by the students.

The current narrative review comprised literature search on Google, Google Scholar and PubMed databases for relevant articles published in the English language from 2015 to 2020. The review of those articles was done in which migraine’s attack prevalence and clinical presentation were documented along with the associated triggers and adopted strategies to combat the illness. The key words used were ‘migraine’, ‘prevalence’, ‘symptoms’, ‘trigger’ and ‘students’. The inclusion criterion comprised original articles in English dealing with migraine prevalence and clinical presentation among university students. Articles in languages other than in English and in which methodology was not mentioned were excluded.

Of the 18 articles found, 7 did not meet the inclusion criteria, and the remaining 11 were studied in detail (Table). 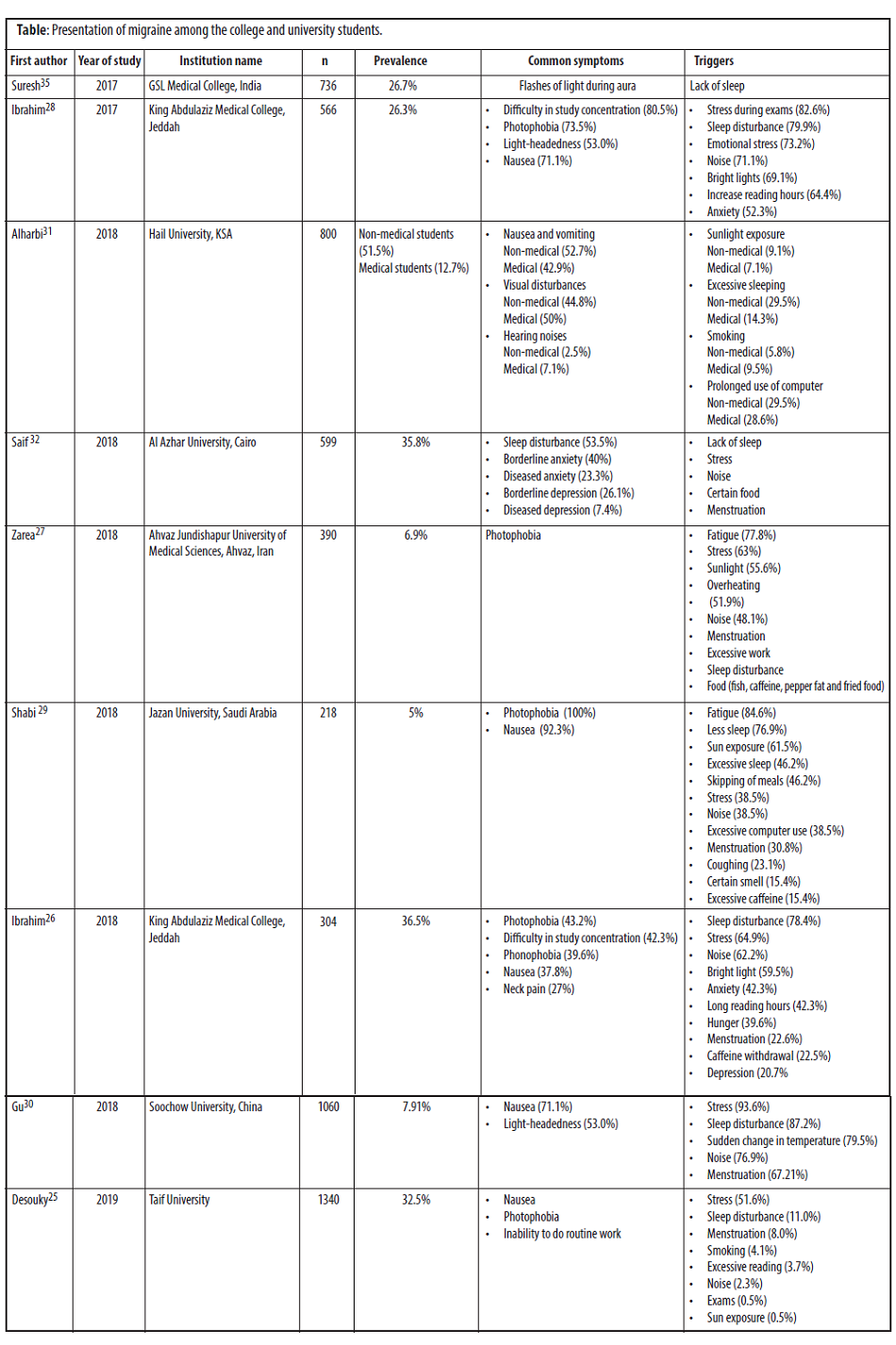 Quality of life: A study conducted at the Taif University revealed that 85.1% of the participants felt disturbed during an episode of migraine.25 Those living in a hostel had high prevalence (41.7%) compared to others (36.1%). This could be due to the fact that hostel life is more stressful than that of those who live in their own homes with families.26

Gender and migraine: Studies across the world have reported higher occurrence of migraine in females compared to males.27-30 In contrast, a study documented higher prevalence in males (80.1%) compared to females (61.9%).31

Severity of pain: A study documented that among those with migraine pain, 14.8% had mild pain, 43.6% had moderate, while severe degree of pain was experienced by 41.6%.28 Similar results were reported by other studies.25 According to a study conducted in Larkana, Pakistan, 34.2% subjects experienced mild, 27.2% moderate and 38.4% severe pain.33 A study in southern India documented 35% mild pain, 45% moderate pan and 20% severe pain.34

Frequency of migraine attack: Daily migraine was documented for 12.2%, while 43.6% suffered from daily to weekly episodes, 38.8% had weekly to monthly attacks, and 5.5% experienced migraine once a year.25 Another research mentioned that migraine pain for 1-3 days a week was present in 1.23% subjects, 4-6 days/week in 11.11%, twice a month in 6.17%, weekly occurrence in 11.11% and irregular frequency was noted in 66.67% individuals.30 Other studies also documented variable frequency patterns.25,27

Location of migraine pain: A study reported that 77% students had pain unilaterally and in the temple region.35 A study mentioned that right-sided pain was present in 38.1% and 35.7% students, left-sided pain in 21.4% and 28.2%, while bilateral pain was mentioned by 40.5% and 36.1% medical and non-medical students respectively.31 Another study reported that pain started from the forehead in 23% subjects, while in 16.9% subjects it started from the region of the temple, and from the eyes in 17%.27

Educational impact: According to a research, those who study for >3 hours per day are more prone to developing migraine.26 A study revealed that students suffering from migraine could not focus on studies optimally due to the pain that led to decrease in performance in 83.9% of the students, and 78.2% students were not able to attend classes regularly due to the severity of migraine.28 Parallel findings were documented by other studies.25,29 Among the non-medical students, absence for <3 days was documented for 79.7%, 4-7 days for 14.1%, 8-14 days for 3.7%, and 15-21 days for 1.2%. In comparison, it was <3 days for 88.1% and 4-7 days for 11.9% among the medical students.31 Medical students studying in Iran reported that their performance in health delivery was negatively affected.27

Treatment / Relieving factors: According to a study, only 12% of the participants opted for pharmacological treatment. Out of those who used drugs, 8.6% were those who suffered from mild pain, 22.1% had moderate and 60% had severe migraine pain. Among the strategies that were used other than the medicines were sleep, rest, warm bath/shower, drinking water, eating, acupuncture and massage.30 Comparatively high percentage (55.8%) of medical students used medicines for pain relief, with majority (41.4%) using OTC drugs and 14.4% using medicines prescribed by the doctors. In total, 66.7% used paracetamol, 17.6% used a combination of paracetamol and non-steroidal anti-inflammatory drugs (NSAIDs), and only 3.2% used NSAIDs alone. Among the non-medical options, a huge majority (97.3%) exercised, 35.1% did rest to combat the migraine pain, 25.2% chose to stay in a quiet and dark place, 12.6% did head massage, while 9% took shower for pain relief.26 Another study documented individuals opting for OTC medicines more (72.5%) compared to drugs prescribed by a physician (16.8%). Paracetamol was used by 66.7%, while 14.8% used combination of NSAID and paracetamol, and 6.5% preferred NSAID alone.28 A study in India mentioned the use of paracetamol by 54%, while 82% consulted a physician, 16% consulted a neurologist, and 2% went to the ophthalmologist.34 Another research documented that lying down and sleeping were the most common strategies used (84.6%). Other remedies were keeping oneself in a dark room with quietness (76.9%), head massage (53.8%) and tying something around the head (38.5%).29 A research revealed that only 11.1% participants opted for treatment options for migraine, with 53.9% opting for paracetamol, ibuprofen 32.3%, acetaminophen 11.9%, aspirin 1.4% and 0.5% selected diclofenac sodium. Less than daily to weekly medications were taken by 93.8% subjects, followed by daily medication 4.1%, less than weekly to monthly by 1.6% and less than monthly to once a year was taken by 0.5% participants.25 Contrary to the use of paracetamol as the most common medicine, a study mentioned the use of NSAIDs by the majority (70.3%), followed by traditional medication and rest by 19.5%.32 A research documented that acetaminophen was used by 57.3% and 26.2%, acetaminophen, and ergotamine were used by 6.2% and 16.6%, acetaminophen and non-pharmaceutical drugs by 0.4% and 14.3%, while acetaminophen, NSAID, opioids, ergotamine and non-pharmacological drugs were taken by 19.9% and 42.9% non-medical and medical students respectively.31

Results of the above-mentioned studies conducted among college and university students showed that migraine pain is prevalent in variable percentages around the globe. It is more common in females compared to males. Family history plays a vital role. The symptomatic presentation of the disease is also variable. Light-headedness, visual disturbances, nausea, vomiting, sleep disturbances and difficulty to concentrate were among the most common complaints. There are various triggers that can provoke the migraine pain. The most common ones were stress, sleeping disturbance, examination pressure, noise, sun exposure, menstruation, excessive computer use, staying in hot environment and increased reading hours. Migraine pain affects QOL and has negative effect on the academics. Various strategies were adopted by the students to alleviate the pain. Among the pharmacological treatment, paracetamol was among the commonly used analgesics. Other relieving factors included taking rest, staying in a dark and quiet place, warm bath, head massage, tying something around the head and sleeping.

Although migraine is a common disorder, many of the affected individuals remain undiagnosed. The studies cited above revealed that many patients depend on OTC medications for combating the pain. Therefore, awareness among the general public related to the efficacy of migraine-specific medications should be created in order to alleviate the illness and to prevent it from developing into a chronic disease.

Migraine pain is prevalent with varying severity levels among college and university students. Identifying triggers is an essential feature in preventing the severity of migraine. As the disease affects QOL of students, it is essential to create more awareness so that the affected students may approach physicians and may enjoy undisturbed focus on academics.

3.      Hansen JM, Charles A. Differences in treatment response between migraine with aura and migraine without aura: lessons from clinical practice and RCTs. J Headache Pain. 2019; 20:96.