Multiple Myeloma is a clonal proliferation of plasma cells with bone marrow as the primary site of occurrence. Extramedullary multiple myeloma is uncommonly seen either at presentation or later during the course of the disease. Central nervous system involvement by multiple myeloma is an extremely rare entity with a dismal outcome. This case report focuses on a 45-year-old male who presented with bone aches. Investigation findings leading to the diagnosis included elevated calcium levels, lytic lesions on radiological examination and clonal plasma cells in bone marrow biopsy. During his treatment, the patient was given chemotherapy regimens containing Lenalidomide, Bortezomib, Cyclophosamide, and Prednisolone. Thereafter, he developed neurological complications (CNS myelomatosis), which resulted in his demise. The clinical presentation, diagnosis, treatment and outcome of this rare condition is detailed below.

Multiple Myeloma (MM) is a malignant clonal proliferation of plasma cells, commonly involving the bone marrow.1,2 It makes up around 10% of all hematological malignancies.1 Extramedullary MM is seen in 7% of patients at the time of diagnosis where as in 6% of patients it develops later during the course of the disease.3,4 Central nervous system (CNS) involvement constitutes merely 1% of all Multiple Myeloma patients4 and it carries a dismal prognosis—mainly due to scarcity of treatment guidelines and generally aggressive nature of the disease.5 Median overall survival of CNS myelomatosis is 4.6 months.6 Treatment involves multiple modalities in the form of chemo-immunotherapy, radiotherapy and intrathecal chemotherapy.7

We present a case report on CNS involvement of multiple myeloma during the course of treatment.

Our patient, a 45-year-old gentleman, with a history of chronic smoking, presented to Jinnah Hospital, Lahore with skeletal aches and pains in October 2018. He belonged to the lower-middle class, had no significant comorbidities or family history and was not using any prescription or recreational drugs. His workup revealed anaemia (Hb: 8.9 g/dl) and mildly elevated calcium (corrected value: 10.4mg/dl). Pertinent radiological examination (X-rays) of lumbosacral spine, bilateral hip joint, and femora revealed extensive permeative lytic lesions. Bone marrow biopsy showed 48% monoclonal plasma cells. Beta-2-microglobulin was markedly elevated at 5042 ng/ml. However, immunofixation and electrophoresis (both serum and urine) were unremarkable. Because the presence of > 20% clonal plasma cells in the bone marrow and other myeloma-defining events (MDEs) such as hypercalcaemia, lytic bone lesions and anaemia, the patient was diagnosed with Multiple Myeloma. Cytogenetic analysis like del(13q), del(17p), p53, IgD and Light chain variant was not carried out due to financial constraints.

The patient was started on weekly Bortezomib and steroids, along with monthly bisphosphonates. He improved remarkably but after eight weeks of treatment, he stopped attending for further therapy due to affordability issues. After around 1.5 months he presented in the medical emergency department with paraparesis. Urgent MRI lumbosacral spine was done which revealed intradural mass in the spinal canal at L4 & L5 levels causing severe cord compression. He was promptly offered radiotherapy and steroids; VRd regimen was planned initially but due to persistent thrombocytopenias, Lenalidomide was replaced with cyclophosphamide.

Clinically, the patient improved with treatment and tolerated the regimen quite well as the cytopenias disappeared and the symptoms improved (without any unanticipated events). He was advised reassessment after 44 weeks of Bortezomib and steroids and 16 sessions (8 cycles) of cyclophosphamide. Bone marrow showed less than 5% plasma cells. Skeletal survey also showed good response. The patient was put on maintenance Lenalidomide with two-weekly follow-up visits initially.

Merely 10 days into maintenance, the patient had two episodes of tonic-clonic seizures followed by loss of consciousness. MRI revealed extensive nodular leptomeningeal enhancement in the supra and infratentorial compartments (Figures1a, b). 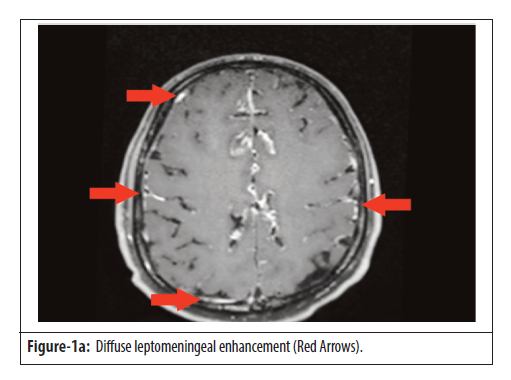 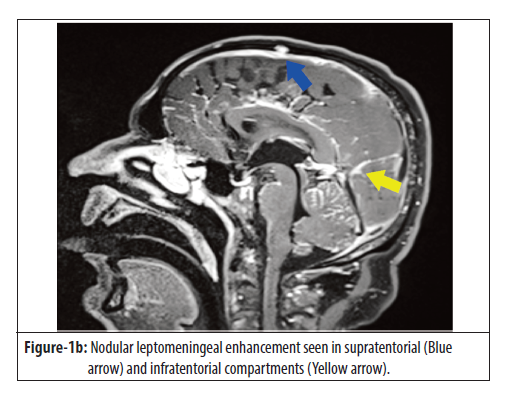 Cerebrospinal fluid (CSF) analysis showed abundant plasma cells (secondary to an atraumatic lumbar puncture, which does not pose any significant risk of CNS seeding, especially if no circulating disease cells are present) (Figure 2).8 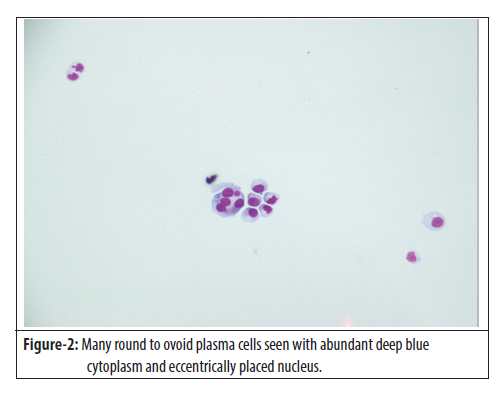 CD 138 was performed and was positive. The patient was labelled as CNS Myelomatosis which carries poor prognosis. Treatment regime planned for the patient included cranial irradiation and Intrathecal chemotherapy with Trio-IT (Methotrexate, Dexamethasone and Cytarabine) biweekly)

Outcome: The patient received cranial irradiation as planned, but could not proceed for timely intrathecal chemotherapy. He developed additional neurological complications which ultimately resulted in his demise.

CNS involvement in MM patients is very rare and can present in heterogenous manner ranging from masses to leptomeningeal involvement.4 Symptoms can vary from headache, confusion, nerve palsies, radiculopathy or focal neurological deficits. Leptomeningeal disease comprises of 70% of cases.9 In radiology, MRI brain with contrast is the modality of choice. CSF evaluation with flow cytometry is an important aid to establish diagnosis.4 A case report showed good response to intensive chemotherapy (VDT-PACE- Bortezomib, dexamethasone, thalidomide, cisplatin, doxorubicin, cyclophosphamide, etoposide) along with intrathecal followed by maintainence  bortezomib and lenalidomide and monthly intrathecal chemotherapy.10 Proteosome inhibitors have limited blood brain barrier penetration, however, immunomodulatory drugs (IMiDs) especially Pomalidomide is reported to be effective. CNS irradiation can also be included in treatment regimes.9

Data on treatment of CNS myelomatosis is sparse and is in the form of case reports mainly. There is a need to establish clear guidelines on the treatment of CNS involvement in multiple myeloma which has not yet been feasible yet due to rarity of the presentation.

This case is reported because CNS involvement in multiple myeloma is a rare presentation. It is challenging both in terms of diagnosis and treatment. Survival outcomes are dismal; therefore, an aggressive treatment approach has to be followed, if clinically feasible. Recommended regimen should include systemic as well as intrathecal chemotherapy. IMiDs on account of CNS penetration forms the basis of systemic regime. Autologous stem cell transplant can also be offered to appropriate candidates as consolidation.

Acknowledgement: Gratitude is owed to our patient for generously allowing us to be his health care providers and granting us permission to use his case details for academic purpose.

Disclaimer: A written informed consent was taken from the patient to publish this case report.