Assessment of the relationship between self-esteem and academic score of undergraduate medical students of Azad Kashmir, Pakistan

A cross-sectional observational study was performed at the Poonch Medical College, Azad Kashmir, Pakistan, from June 2018 to June 2019 to assess the relationship between self-esteem and the academic score of undergraduate medical students. Rosenberg Self-Esteem (RSE) scale was used as data collection tool. The study questionnaire was electronically distributed to all 500 students enrolled in the Bachelor of Medicine and Surgery (M.B.B.S) programme out of which 253 submitted the questionnaire (response rate: 50.6%). The mean academic score of all students was 66.61± 5.42 and the mean RSE score was 28.66± 3.98). A statistically significant correlation was not found between age, academic score, and RSE score. Female students had slightly higher academic performance scores and RSE scores compared to the male students, but this difference was not statistically significant. Future studies are required to assess the contributing factors responsible for better academic performance.

Self-esteem is a common and vital construct in the social sciences and everyday life.1 It refers to the positive or negative attitude to one’s own personality.2 Self-esteem is a fundamental and primary need for every human.3 Low self-esteem can ultimately be a causative factor for anxiety, clinical depression, and suicidal tendency.2 It can also cause a high level of academic stress and poor academic performance.4,5 Students with a high level of self-esteem can easily deal with academic challenges and demands compared to their counterparts but high self-esteem can create stress among students because failure is not an option in their academic life.6 But interestingly, a few previous studies have revealed that academic score was not significantly affected by self-esteem.7,8 Therefore, the relationship between these two factors is still inconclusive and debatable.

Rosenberg recommended that in order to decrease self-esteem among undervalued social minorities four conditions must be present. These conditions are awareness, agreement, personal relevance, and significance. First, an individual must identify the group with negative interpretations and awareness. It could be the larger or smaller population. Then the individual has to agree with these negative assessments (agreement). Furthermore, the individual must accept that these negative societal assessments apply to the self (personal relevance). Lastly, the individual must be worried about society’s assessments (significance).2 The concepts of esteem and stress are closely related.9 Academic tension or stress is a multifactorial mental condition often mentioned by the students. It is believed that mental well-being and self-esteem are influencers of academic stress experienced by most of the students at some point of their academic life.10

After an extensive literature search, we could not find any recent Pakistani study that measured the association between self-esteem and the academic score of undergraduate medical students. Hence, this study was undertaken to assess how self-esteem affects the academic performance of undergraduate medical students of the Azad Kashmir region of Pakistan.

Data were descriptively presented in Mean±SD, frequencies, and percentages. The Rosenberg self-esteem questions were interpreted as follows: strongly disagree

The participants’ demographics are shown in Table-1. 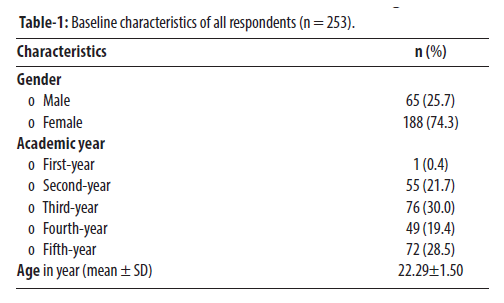 Respondents’ answers to all RSE questions are shown in Table-2. 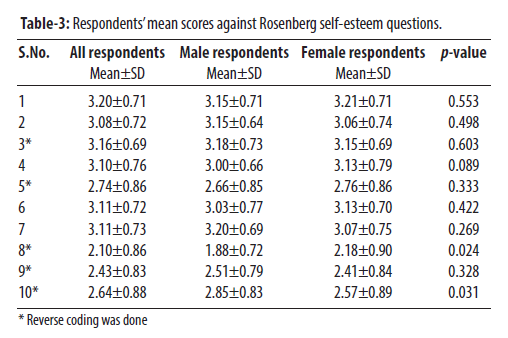 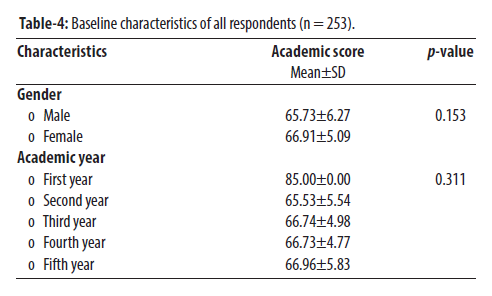 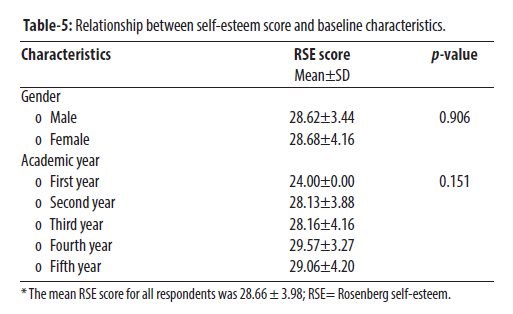 There was a significant difference in the scores of males versus females for two items in the RSE scale (Item 8, and 10). These two items were negatively marked in the RSE scale. Female students felt a need for more respect and they also had more depressive thoughts compared with the male students. Future studies need to be carried out to identify why female students felt this way. A previous Iranian study revealed a self-esteem score of 19.8±5.2 which is lower than the current study but the Iranian study had involved high school students.3 Therefore, these two studies are not directly comparable. Another study including undergraduate medical students showed the RSE score between 26 to 30 for most of the students.11 This means, the RSE score of medical students in Azad Kashmir is not very low but how it relates to the academic performance is not clear. Due to the scarcity of similar local studies, the findings of this study could not be compared against a recent Pakistani study that used the RSE scale to measure the self-esteem level of the medical students. The failure to find a link between the Rosenberg self-esteem score and academic performance of undergraduate medical students warrants further investigations to determine the relationship.

The mean academic score was 66.61±5.42%. There should be plenty of opportunities to improve this score. The current study recommends further studies to identify the factors that are more related to academic performance. This study had several limitations, some of which are: it was a single centred study, the study sample distribution was not uniform across the academic years, convenient sampling technique, and the nature of the study was cross-sectional observational. Due to these limitations, the findings of this study may not be generalised.

3.      Hadinezhad P, Masoudzadeh A. A Study of the Relationship Between Self-Esteem and Academic Achievement In Medical Students Of Sari Medical College. Life. 2018; 8:1-5.

Ventricular-arterial coupling as a potential therapeutic target in diabetes