A total of 22 patients were included with the mean age of 46±16 years and majority 17(77%) were male. The most common findings on transthoracic echo were significant respiratory variation in mitral and tricuspid inflow velocities in 20(91%), and septal annular e’>9 in 10 (86%). The most common finding on CMR was respiratory septal shift in 22(100%), followed by septal bounce in 21(95%) and thickened pericardium in 18(82%). Nearly two-third of the patients, 15(70%) were considered for pericardiectomy but it was deferred in 5 patients due to high surgical risk. Ten patients underwent pericardiectomy, with no mortality on a mean follow up of 4±2 years.

Constrictive pericarditis (CP) is a rare disease with a difficult diagnosis. It is a form of diastolic heart failure, caused by a rigid and inelastic pericardium that prevents adequate ventricular filling. In developed countries, prior cardiac surgery, irradiation therapy, and idiopathic pericarditis are the most frequent causes of constrictive pericarditis. However, in developing countries, tuberculosis still constitutes a major cause of CP.1 CMR has far greater accuracy and reliability in diagnosing CP compared to transthoracic echo (TTE) and may also provide details on haemodynamics. Combination of pericardial thickness and septal shift has a high sensitivity and specificity.

This study was approved by hospital ethical review committee (ERC No. 2020-4775-10220). Cardiac magnetic resonance imaging data of Aga Khan University Hospital, from January 2011 to March 2020 was retrospectively reviewed and patients with the diagnosis of constrictive pericarditis were included. These patients had clinical and echocardiographic features of constrictive pericarditis and were referred for CMR for confirmation of the diagnosis. On CMR, respire-phasic septal shift was considered diagnostic, in the presence of supportive features like dilated atria, dilated IVC, septal bounce and pericardial thickening.2 All the patients with a medial mitral e’ <6 cm/s, E/A >2, respiratory variations of <10% on mitral inflow and absence of annulus reversus on echo were considered to have restrictive cardiomyopathy and were excluded from the study. Similarly patients with features of restrictive cardiomyopathy on CMR, like characteristic patterns of myocardial delayed enhancement with absence of pericardial thickening and absence of septal shift were also excluded from the study.

A pre designed data collection form was filled for each patient after reviewing the medical records. Data was analyzed using SPSS version 22. CMR was performed on 1.5-Tesla Siemens Avanto. 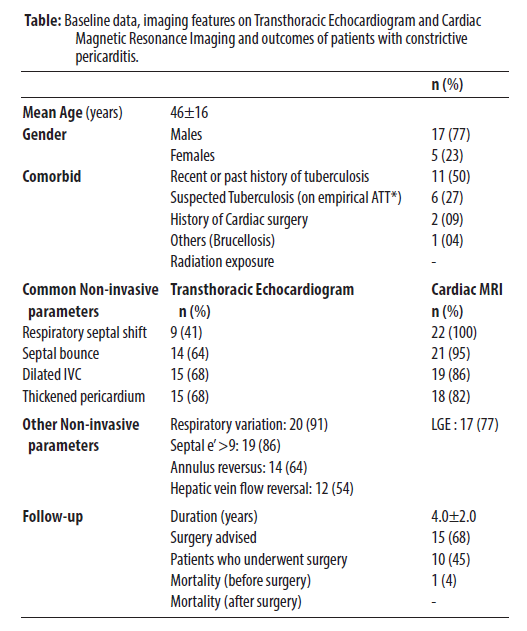 The most common findings on TTE supporting the diagnosis of CP were significant respiratory variation in mitral and tricuspid inflow velocities in 20(91%) and septal annular e’ > 9 in 19(86%).

Mean follow up of 4±2.0 years was available. More than half, 12(54%) had signs and symptoms of right heart failure. Nearly two-third of the patients,15(68%) were considered for pericardiectomy, but it was deferred in 5 patients due to high surgical risk. Ten patients underwent pericardiectomy with non-specific inflammation as the most common histological finding, and no mortality was encountered on follow up.

Diagnosis of constrictive pericarditis and its differentiation from restrictive cardiomyopathy is important but usually difficult. TTE is the initial and sometimes the only affordable test for the diagnosis of this condition. As per Hancock, septal bounce, ventricular septal shift with respiration and bi-atrial enlargement are the three basic signs on TTE in constrictive pericarditis.3 In our study, septal bounce was present in 64% and septal shift in 41% while bi-atrial enlargement was seen in 68%, on TTE.

Significant respiratory variation in mitral and tricuspid inflow velocities represents ventricular interdependence and is an important pathophysiologic feature in CP, which was present in 91% of the patients in this study. This feature is not present in restrictive cardiomyopathy and a number of constrictive pericarditis patients also do not demonstrate this sign.

According to a study by Welch,4 the combination of respiratory septal shift with either a medial e’ velocity >9 cm/sec or a hepatic vein expiratory diastolic reversal ratio of >0.79 ensures a diagnostic sensitivity of 87% and a specificity of 91%. If all three factors coexist, the specificity rises to 97% compromising the sensitivity to 64%.

In this study, expiratory hepatic vein flow reversal was seen in more than half of the patients and septal e’>9 cm/s in 86% patients.

CMR is considered a very reliable imaging modality for diagnosing constrictive pericarditis. However, its use is limited due to less availability and more cost. In two CMR studies on CP, septal bounce had a sensitivity of 81% to 96% and a specificity of 100% for the diagnosis of CP whereas on TTE, it has a sensitivity of 62% and specificity of 93% for CP diagnosis.5,6 In our study, septal bounce was seen in 95% on CMR and 64% on TTE.

On CMR, combination of pericardial thickness and respiratory septal shift achieve a sensitivity of 100% and specificity of 90% in diagnosing CP.7 In our study, respiratory septal shift was seen in 100% of patients on CMR, whereas for the same patients it was picked up in 41% on TTE. In comparison to CT and CMR, TTE is less reliable in detecting thickened pericardium. We also observed that increased pericardial thickness was detected in 82% by CMR compared to 68% by TTE.

According to a study, in chronic constrictive pericarditis patients’ survival is higher following pericardiectomy as compared to that of individuals without surgery.10 However, choosing the right time for pericardiectomy is important. Only ten of the patients underwent pericardiectomy in our study with no mortality on follow-up.

Despite clinical diagnosis of tuberculous constrictive pericarditis and treatment with anti-tuberculous therapy, histopathology revealed non-specific inflammation in the majority of patients who underwent pericardiectomy. The granulomas may be missed on the tissue samples used for histopathology due to patchy involvement of the pericardium. The other explanation to this discrepancy is the fact that tuberculous constrictive pericarditis occurs at a late, burnt out stage of TB when it is difficult to demonstrate typical granulomas in the pericardium.

CP is better diagnosed by CMR than TTE. On TTE, significant respiratory variation in mitral and tricuspid inflow velocities and septal annular e’ >9 cm/s are commonly seen. Respiratory septal shift, septal bounce and thickened pericardium are common findings on CMR, followed by LGE. Patients treated with pericardiectomy show a good outcome. The most probable etiology of constrictive pericarditis in this region, is tuberculosis although it is difficult to prove TB on histopathology due to either burnt out stage of the disease or patchy involvement of the pericardium.

Disclaimer: This study is neither presented before nor published in any journal.