Ventricular-arterial coupling as a potential therapeutic target in diabetes

Patients with type 2 diabetes (T2D) are at high risk of cardiovascular complications. Novel anti-diabetic medications such as sodium-glucose cotransporter-2 inhibitors (SGLT-2i) and Glucagon-like peptide-1 receptor agonists (GLP-1RA) have been shown to possess cardiac and renal protective effects beyond their ability to lower plasma glucose. Use of SGLT-2i and GLP-1RA in patients with T2D and heart failure reduce cardiovascular risk and heart failure-related hospitalisations. SGLT-2i treatment has been shown to improve the long-term prognosis of patients with heart failure. Both drugs also have the potential to normalise ventricular-arterial coupling (VAC). VAC is the crosstalk between the left ventricular function and arterial system, and is an indicator of the global cardiovascular performance. In this overview, we will describe the concept of VAC and the features of diabetic cardiomyopathy, as well as VAC as a potential therapeutic target in diabetes by the use of novel anti-diabetic drugs, primarily SGLT-2i and GLP-1RA.

In patients with type 2 diabetes (T2D), cardiovascular (CV) complications, particularly heart failure (HF), coronary events, and diabetic nephropathy are the major causes of mortality.1,2 For the management of these patients, a holistic approach is recommended. This involves strict control of plasma glucose, serum lipids as well as blood pressure. Weight loss and smoking cessation are advised, but not always achievable. CV outcome trials have shown that in patients with T2D and established CVD, or with multiple risk factors, treatment with new anti-diabetic drugs such as sodium-glucose cotransporter-2 inhibitors (SGLT-2i) and Glucagon-like peptide-1 receptor agonists (GLP-1RA) reduce the risk of CVD and prevent HF-related hospitalisations.2 Therefore, the new 2019 joint European Society of Cardiology (ESC) and the European Association for the Study of Diabetes (EASD) guidelines consider the use of GLP-1RA and SGLT-2i as class IA recommendation for patients with T2D and HF, or high CV risk.1 The CV protection is probably mediated to a large extent by improving the haemodynamic parameters and vascular structure and function, and reducing plasma volume, as well their direct beneficial effects on cardiac metabolism and function.1-4 SGLT-2i and GLP-1RA also have the potential to normalise ventricular-arterial coupling (VAC) and thereby improve central haemodynamics. Here, we will briefly describe the concept of VAC, arterial load and the features of diabetic cardiomyopathy, as well as VAC as a potential therapeutic target in patients with T2D by the use of novel anti-diabetic drugs, primarily SGLT-2i and GLP-1RA. 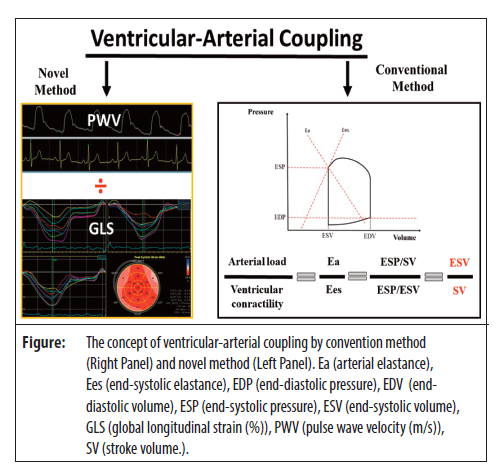 Ea is calculated as the ratio of end-systolic pressure (ESP) divided by stroke volume (SV) (ESP/SV), where end-systolic pressure is derived from brachial systolic blood pressure x 0.9. Ees is measured from ESP divided by end-systolic volume (ESV): ESP/ESV. Thus, VAC can be further simplified as ESV/SV. Recently, a European consensus document on the role of VAC in cardiac disease was published.5 A normal value for Ea was proposed as 2.2 (±0.8) mmHg∕mL and for Ees 2.3 (±1.0) mmHg∕mL. Accordingly, an Ea/Ees ratio close to 1.0 (between 0.7 and 1.0) indicates that LV and arterial system are optimally coupled and produce efficient stroke work. A ratio of >1.0 indicates sub-optimal VAC. Furthermore, novel methods, such as the ratio of pulse wave velocity (PWV) to global longitudinal strain (GLS) (Figure), have been proposed and seem to correlate better with subclinical target organ damage.5,6

Age is an important determinant of arterial load and ventricular stiffness. Age-related increase in central arterial stiffness (arteriosclerosis), unlike intimal calcification (atherosclerosis), is inevitable but slow and gradual. However, both arteriosclerosis and atherosclerosis can be accelerated by the presence of hypertension, obesity, T2D, and metabolic syndrome, leading to an early vascular aging7 and increased LV load, and affects LV function and morphology, independent of their shared effect on arterial load and subsequent LV remodelling. Although it is known that T2D is an important risk factor for increased arterial stiffness, the association, however, may be bidirectional. Recent studies have shown that increased arterial stiffness can lead to T2D and hypertension, and the risk remains significantly high even after adjustment for established CV risk factors.8

The individual components of CV risk factors such as elevated blood pressure and the circulating biomarkers, like plasma glucose and serum lipid levels may fluctuate over time, and the recorded values at the time of risk assessment may not accurately reflect the true CV risk burden in individual patients. However, arterial stiffness is considered a cumulative measure of previous exposure to CV risk factors, and represents an intermediate stage between exposure of CV risk factors and clinically overt CV event.7,9,10 Currently, the carotid-femoral PWV measured by an applanation tonometry is the gold standard for assessing arterial stiffness, and is an independent predictor of CVD and CV mortality, both in healthy and high-risk populations.9,10

The impact of diabetes on left ventricular function and structure

Diabetes, in addition to its strong association with arterial stiffening can also directly affect the heart. Diabetic cardiomyopathy refers to an increased cardiac chamber stiffness and increased LV filling pressure, diastolic dysfunction, LV hypertrophy and lower GLS and strain rate.11 Diabetic cardiomyopathy can be assessed by both echocardiography and cardiac magnetic resonance (MR). Cardiac MR-T1 mapping can, however, reveal early myocardial changes such as interstitial inflammation and fibrosis. It is to be noted that interstitial inflammation and fibrosis often precede reduced GLS (subclinical systolic LV dysfunction) and diastolic dysfunction.11 Furthermore, the presence of insulin resistance, increased fatty acid oxidation and reduced glucose uptake also affect cardiac metabolism adversely as a result of reduction in the energetic efficiency of LV myocardium.12

Ventricular-arterial coupling as a therapeutic target in diabetes

Novel antidiabetic drugs, such as SGLT-2i and GLP-1RA, in addition to their plasma glucose lowering effects, have also been documented to have cardio-protective effects, and seem to be promising therapeutic options in established CVD or in high-risk individuals. Both the drugs can also reduce glucose variability1 and have the ability to induce a small but significant blood pressure reduction.1 Particularly, SGLT-2i (gliflozins) promote glucosuria, reduce glucose toxicity and body weight, and increase natriuresis, as well as decrease blood pressure and arterial stiffness.3 However, how the interaction of GLP1-RA and SGLT-2i works with other antihypertensive drugs and affects CV prognosis is unknown.1

In patients with diabetes, these new drug classes reduce the risk of CV complications as a composite CV endpoint, including myocardial infarction, stroke, and CV mortality, but sometimes also total mortality.13,14 Of special relevance is the protective effect of the SGLT-2i on the risk of heart failure. The available evidence suggests that SGLT-2i reduce both preload (plasma volume contraction due to natriuresis) and afterload (blood pressure and arterial stiffness), and, hence, may improve subendocardial blood flow in patients with HF.3,15 Recently, Ikonomidis et al showed that in high-risk patients with T2D the use of GLP-1RA, SGLT-2i or a combination of both resulted in greater improvement of systolic LV function, as reflected by GLS, circumferential strain and myocardial work index derived from pressure-strain analysis, and a greater reduction in arterial stiffness derived from PWV.16 Interestingly, the combination of GLP-1RA and SGLT-2i showed the greatest improvement in VAC as assessed by PWV/GLS ratio. However, in a previous small randomised, double-blind, placebo-controlled cross-over study, GLP-1RA, liraglutide, had no effect on systolic LV function (EF, strain and strain rate) and on exercise capacity as reflected by metabolic equivalents in patients with newly diagnosed T2D and stable coronary artery disease (CAD).17 Notably, the authors did not assess VAC, and the small and selective sample (30 patients available for final analyses) with a shorter follow-up (12 weeks) might explain this apparent discrepancy with other studies. Furthermore, in a recent study of 44 individuals with T2D and preserved renal function, the SGLT2i Dapagliflozin showed protective effects on systemic and renal haemodynamics, by reducing stroke volume, vascular stiffness, and mean arterial pressure, without increasing the heart rate.18 It should be noted that this effect was independent of reducing plasma glucose. Hence, given the fact that there exists a bidirectional association between increased arterial stiffness and T2D and hypertension8 and that there is also a close relationship between CVD and renal disease,18 GLP-1RA and SGLT2i may be attractive therapeutic options in T2D with concomitant chronic kidney disease and diabetic cardiomyopathy due to their cardiorenal benefits, as well as their ability to restore VAC. Furthermore, most recently, it was shown that SGLT-2i treatment improved the long-term prognosis of patients with HF and reduced ejection fraction regardless of the presence or absence of diabetes.19

Finally, TD2 is present in approximately one-third of patients with stable angina, and in some patients CAD may even appear as a complication of T2D.20 Ranolazine and Trimetazidine, are effective anti-anginal drugs with ion- and metabolism-modulating properties, and have minimal or no effect on heart rate and blood pressure.21 Both agents have been studied in patients with T2D and stable angina, and reduce HbA1c, beyond their effect on angina. However, their effect on VAC should be explored in future studies.

There is growing evidence that novel anti-diabetic drugs, such as SGLT-2i and GLP-1RA, have cardio-protective effects, and seem to be promising therapeutic options in established CVD or in high-risk individuals. Besides their role in better glycaemic control and reduction of CV endpoints, they have additional favourable effects on HF and most likely on VAC. VAC reflects global CV performance and incorporates both arterial stiffness and subclinical myocardial function in its definition. SGLT-2i and GLP-1RA have the potential to slow or reverse diabetic cardiomyopathy and diabetic kidney disease, which are major causes of CVD and CV mortality.

Assessment of the relationship between self-esteem and academic score of undergraduate medical students of Azad Kashmir, Pakistan