To assess the knowledge, behaviours and attitudes towards Patient Safety (PS) among interns of a tertiary care hospital, a cross sectional survey was conducted among 126 interns of Combined Military Hospital, Lahore (CMH Lhr), using Questionnaire (APSQ -4) in December 2019. Statistical analysis was done on SPSS 23.

PS knowledge exists among the interns with limited training and practices. Medical educationists and supervisors should incorporate PS culture in junior doctors through rigorous training.

Patient care has gradually gained worldwide challenge as one of the top healthcare priority. Patient safety (PS) has been defined by “The Institute of Medicine” as “the prevention of harm to the patients”.1 The situation is worse in developing countries with a minimum of one adverse event happening in 8.2% of hospital records due to lack of awareness and practices of PS.2 Inadequate medical service delivery, insufficient workforce and lack of training of medical care personnel are also common challenges in providing high-quality healthcare in middle- and low-income countries.3 There is also a general lack of culture of learning from medical errors in hospitals worldwide.4

Junior doctors are at the forefront of handling patients, and experience adverse medical errors themselves or by observing other healthcare workers.5 They are the specific group in which awareness, training and assessments of PS concepts should be enhanced in order to develop and augment safe clinical practices. Only a limited number of studies have evaluated PS attitudes among junior doctors; this needs to be explored.6 The impact that the perceptions of junior doctors have on PS culture in healthcare facilities also needs to be established.6

Combined Military Hospital, Lahore, (CMH Lhr) is a 1,000-bed tertiary care teaching hospital where medical graduates from civilian and military institutes undergo foundation-year training. One hundred and twenty-six interns are presently working in CMH Lhr since April 2019. The study was conducted to explore the knowledge and attitude regarding PS among these interns. The hospital has been associated with WHO sponsored PS-friendly hospital initiative in Pakistan.7

Quantitative descriptive cross sectional survey design was utilised for the study. Permission was sought from and granted by the developer of a validated Patient Safety survey tool: Attitude to Patient Safety Questionnaire Version 4 (APSQ-4). Ethical Review Committee of CMH Lhr granted permission to conduct the survey and the study was conducted from 10 December 2019 till 25 December 2019.

With Census Sampling technique, all working 126 interns of the hospital, including both military as well as civilian category, were included in the study with non-responders as exclusion criteria. APSQ-4 was distributed by Direct Administrative approach. The survey was kept anonymous regarding category of interns, their names and departments of the hospital. APSQ-4 consisted of 30 items related to four PS domains: ‘PS knowledge’ (10 items), ‘Attitude towards medical error reporting and learning from errors’ (11 items), ‘Attitude towards PS skills’ (3 items) and “Attitude towards PS training” (6 Items). Seven point Likert Scale with 1= Strongly Disagree (SD), 2 = Disagree, 3 = Slightly Disagree, 4 = Neutral, 5 = Slightly Agree, 6 = Agree and 7 = Strongly Agree (SA) was used to obtain response.

A 100% response rate was achieved as all 126 interns participated in the survey. Frequencies of response and their means and standard deviations (SD) on a response scale are given in Table-1a and Table-1b. 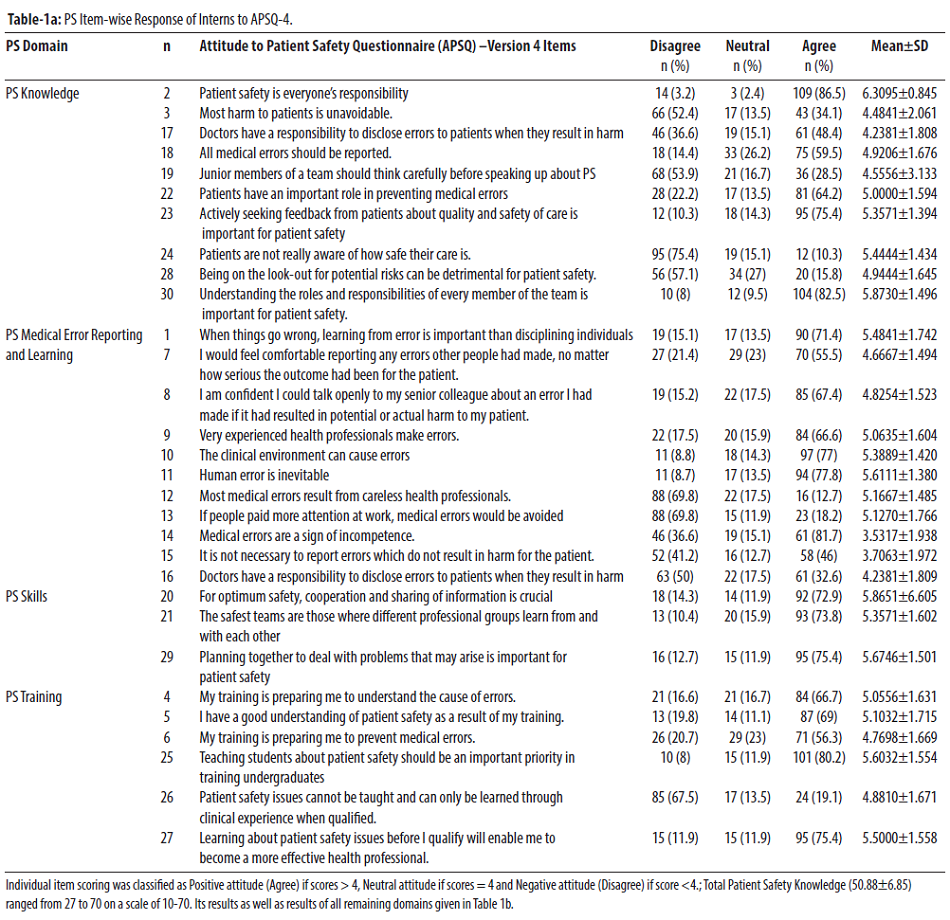 A significantly higher percentage of interns agreed upon all items related to PS knowledge indicating their good insight on the subject (Table 1a: Items 2,3,17,18,19,22,23,24,28, 30 / Table-1b: serial 1). The interns agreed that medical error reporting has a significant role in clinical practice

Significant difference of attitude only towards PS Training was identified between civilian and military interns with T Test (df) 1.940 (124) p-value = 0.055.

Establishing a PS culture involves introduction of its related core concepts at all levels of medical education, including foundation year training. The best response by interns was for the domain “PS attitude to medical error reporting and learning” (53.34±7.62) followed by the domain “PS knowledge” (50.88 ±6.85) as shown in Table 1b. Increase in PS knowledge increases PS attitude, behaviour, and skills. A similar study conducted on interns indicate that enhancing knowledge of junior doctors by teaching PS skills plays a crucial role in minimising medical errors for improved health care outcomes.6

Highest individual PS item response was given to “PS is everyone’s responsibility together”, indicating that interns having PS knowledge strongly believe that Teamwork is a major PS construct, supporting the literature review of Teamwork being one of the major PS domains.8

Lowest response by the interns was for the domain “Attitudes to PS skills” (16.34±3.46) indicating lack of training and practices of PS skills. A similar study also indicates that no formal PS teaching and training programmes generally exist for junior doctors in teaching hospitals.9

Inferential statistics by comparing means of civilian and military interns in the studied domains of PS was done by Independent Sample T Tests taking p-value as ≤0.05. PS Attitude to PS Training domain only had a significant

p-value = 0.05 with no statistical significant differences in relation to domains of PS knowledge, adverse event reporting and skills. This may have been due to the overall lack of PS related teachings at undergraduate level generally in all medical institutes, both civilian as well as military.

Hospitals should ensure that their junior doctors are given meticulous and rigorous training in all aspects related to PS attitudes, behaviours and skills in their daily clinical practices. The goal should be to strongly influence and incorporate a PS culture among doctors to minimise medical errors caused by healthcare professionals for optimum patient care.

Disclaimer: The article was part of the Master’s degree programme in Health Professions Education done in Riphah International University Islamabad, Pakistan. It has not been previously presented or published.

2.      Ginsburg LR, Kumar DN, Donaldson LJ. What stage are low-income and middle-income countries (LMICs) at with patient safety curriculum implementation and what are the barriers to implementation? A two-stage cross-sectional study. BMJ Open. 2017; 7:1-10.

7.      WHO. WHO Support for Patient Safety Friendly Hospital Initiative In punjab, 2018.