Methods: The case-control study was conducted at the Pakistan Institute of Medical Sciences, Islamabad, Pakistan, and the District Headquarters Hospital, Rawalpindi, Pakistan, from 2018 to 2020, and comprised Guillain-Barré syndrome patients in group A and healthy controls in group B. The patients were diagnosed on the basis of clinical presentation, nerve conduction study, electromyography, cerebrospinal fluid analysis and biochemical profile. Data was analysed using SPSS 23.

Conclusion: Guillain-Barré syndrome affected patients regardless of age, while males were more affected than females. Majority of the patients had an antecedent infection before disease onset. Increased levels of interleukin-17 showed involvement of autoimmunity. Albuminocytologic dissociation differentiated it from poliomyelitis.

Guillain-Barré syndrome (GBS) is an autoimmune disease that was first reported in 1916. It affects the peripheral nervous system (PNS). Ascending weakness resulting in acute flaccid paralysis is the striking feature of this polyneuropathy. About one-third of patients require long-term follow-up in an intensive care unit (ICU) with or without mechanical ventilation.1

There are four common GBS variants: acute motor axonal neuropathy (AMAN), acute inflammatory demyelinating polyneuropathy (AIDP), acute motor and sensory axonal neuropathy (AMSAN) and Miller Fischer syndrome (MFS). GBS is a global disease having an annual incidence of 0.81-1.89 per 100,000 persons. In Western countries, it is reported to be increasing exponentially with growing age, and males are more affected than females.2

Albuminocytologic dissociation (ACD) in cerebrospinal fluid (CSF) is one of the diagnostic markers of GBS along with nerve conduction study (NCS) and electromyography (EMG).3

The exact aetiology of GBS is still unknown, but there is evidence of some preceding infection in approximately two-thirds of patients, mostly gastrointestinal (GI) infection and upper respiratory tract infection (URTI), and GBS follows after three to four weeks of preceding infections. The most common antecedent infection-causing agent is Campylobacter (C.) jejuni.4,5

As GBS is an autoimmune disease, both humoral and cellular immunity are involved in pathogenesis. Plasma antibodies to gangliosides are found in about half of GBS patients. There is also evidence of lymphocytes infiltration in peripheral nerves and spinal roots, followed by macrophage-mediated stripping of myelin.7

Cellular immune response against GBS is increased by the release of cytokines by lymphocytes. T-helper-17 (Th-17) lymphocytes release interleukin-17 (IL-17) cytokine which is the main trigger of this autoimmunity. Both Th-17 and IL-17 play a crucial role in host defence mechanism and inflammatory responses.8

Th-17 cells are involved in autoimmune diseases of mice and humans, such as multiple sclerosis (MS), systemic lupus erythematosus (SLE), rheumatoid arthritis (RA) and inflammatory bowel disease (IBD). Six isoforms of IL-17 are known, from IL-17A to IL-17F, but only IL-17A and IL-17F are produced by Th-17 cells. Both these cytokines are involved in inflammation production. The roles and characteristics of Th-17 and IL-17 in GBS have been poorly defined. Increased concentrations of IL-17 in CSF and plasma of GBS patients have been reported.9

GBS is treated by intravenous immunoglobulin (IVIG) or plasma exchange (PE), or both. Persistent severe morbidity is seen in 10-20% of cases, while the mortality rate of GBS is 3-10%.10

The current study was planned to explore clinical features, biochemical markers, antecedent infections and treatment of GBS, and to assess its association with demographic and biochemical features.

The case-control study was conducted at the Pakistan Institute of Medical Sciences (PIMS), Islamabad, Pakistan, and the District Headquarters (DHQ) Hospital, Rawalpindi, Pakistan, from 2018 to 2020. The study was reviewed and approved by the University Ethics Committee of Pir Mehr Ali Shah (PMAS) Arid Agriculture University, Rawalpindi during its 18th meeting held on 27th September, 2018. Demographic data was collected from the medical record of the patients, while biochemical analyses were performed from CSF and blood samples. Clinical examination was performed at the Biotechnology Laboratory, Department of Biochemistry and Biotechnology, PMAS, Arid Agriculture University, Rawalpindi. The sample comprised consecutive patients of GBS and healthy controls randomly enrolled from the community and did not have GBS or any other known autoimmune disease. Patients were included irrespective of gender and age who had been diagnosed with GBS by physicians. Patients having any autoimmune disease other than GBS were excluded. Apart from routine examination (R/E), CSF, NCS and EMG were the diagnostic tools. A questionnaire was generated to collect detailed history of the patients. Neurologists were involved in conducting NCS, EMG and physical examination of all the patients.11

Data was analysed using SPSS 23. Mean values and standard deviations as well as percentages and frequencies were calculated. Data was subjected to Student’s t-test, chi-square test and analysis of variance (ANOVA). P<0.05 was considered statistically significant. 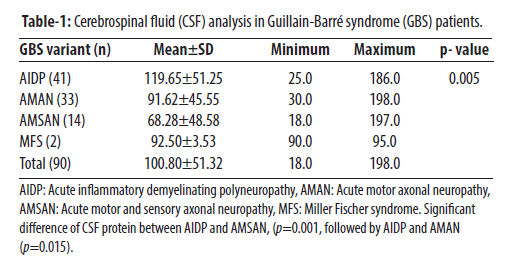 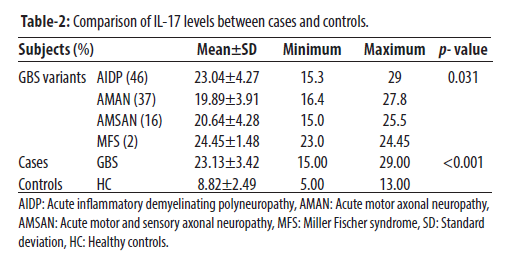 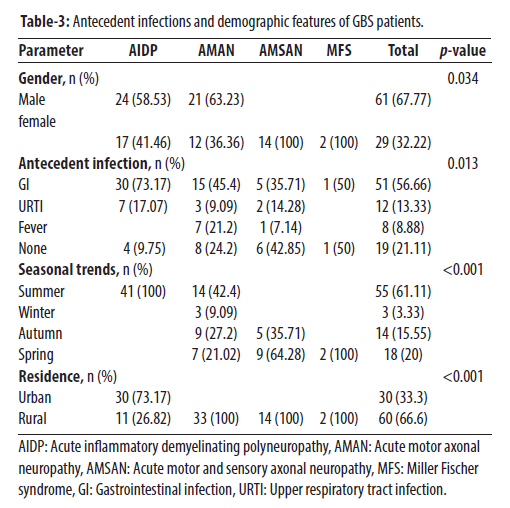 GBS is an autoimmune polyradiculoneuropathy. Activation of adaptive immunity plays an important role in this autoimmunity. There are several aetiological agents of GBS. The most widely accepted theory is that GBS is caused by molecular mimicry between lipopolysaccharides in the cell wall of C. jejuni and ganglions of human nerves. C. jejuni causes diarrhoea in humans and is found to be the causative agent of more than 30% of GBS cases. Other known aetiological agents are cytomegalovirus and Epstein-Barr virus.14 IL-17, a cytokine released by Th-17, promotes migration of neutrophils and plays an inflammatory role in the development of the disease. The current study showed that IL-17 levels were markedly increased in GBS patients when compared to the healthy population samples. CSF is considered to reflect events in the blood-nerve barrier. ACD was seen in all GBS variants with increase in AIDP. This may be due to myelin sheath degeneration in AIDP.15 ACD differentiated paralysis caused by GBS from paralysis caused by poliomyelitis. CSF analysis in GBS showed increased protein concentration with normal or fewer ACD cells, while CSF analysis in poliomyelitis had normal protein concentration with increased cell count. Autonomic symptoms, such as vasomotor disturbances, urinary retention and constipation, are also very frequent in GBS.16 Very little data on GBS is available in Pakistan because of being a rare disease, and remote areas of Pakistan have very poor health facilities and data maintenance. Many patients remain undiagnosed due to a lack of health facilities. The current study had 90 GBS patients having males more infected than females showing a gender ratio of 2.1:1. This ratio was in line with 2.1:1, and  higher than 1.6:1 reported earlier in Karachi.17 CSF with increased protein level and white blood cell (WBC) count ≤10/cmm was taken as an indicatin of ACD. In the current study, mean CSF protein of GBS patients was 100.80±51.32mg/dl ranging 18-198mg/dl. Another study showed raised mean level of CSF proteins 131.1±110mg/dl.18 AIDP was found as the most common subtype of GBS, followed by AMAN and AMSAN. A study also reported AIDP as the most common GBS variant.19 The most striking feature of GBS is ascending weakness followed by a tingling sensation, while several patients face walking difficulty, paresthesia and numbness, and some patients suffer from respiratory distress and require assisted ventilation.20,21 The patients in the current study were offered treatment by intravenous immunoglobulin (IVIG), plasma exchange (PE), or IVIG preceded by PE in line with literature, the results suggested that both therapies are equally effective.22 Most of the patients in the current study had complained of diarrhoea which was the commonest preceding event. URTI was the second most common antecedent infection. The mean age of GBS patients was 40.20 years. Age >50 years was more susceptible to GBS as 36% patients fell in that age group. Young age group was comparatively less affected.13,24

ACD helped in GBS diagnosis. Increased level of IL-17 underlined the status of autoimmune disease. Males were more affected than females, while most of the patients had GBS during summer months.