Objective: To review different modes of application of hydroxyapatite for treatment of dentin hypersensitivity via dentinal tubule occlusion.

Results: Of the 132 research articles initially identified, 97(73.5%) related to the 10-year study period. After detailed screening, 16(16.5%) studies were included. The results of in vitro studies showed that application of hydroxyapatite caused dentinal tubule occlusion leading to reduction in dentin permeability and reduction in dentin hypersensitivity.

Conclusion: Hydroxyapatite has the potential to reduce dentin hypersensitivity via dentinal tubule occlusion within 2-8 weeks.

Dentin hypersensitivity (DH) is a commonly encountered complaint in clinical practice and is marked by a short, sharp pain, which occurs in response to thermal, osmotic, tactile, evaporative or chemical stimuli.1 According to the hydrodynamic theory, external stimuli cause abrupt movement of dentinal fluid within the dentinal tubules, leading to DH. Clinically, it can be described as brief and sharp pain with rapid onset, which may be followed by a dull and aching pain. DH can be generalised or localised and can simultaneously affect one or more tooth surfaces and is dependent on the duration of the applied stimulus.2 It can be aggravated by multiple causes, including gingival recession, enamel erosion, dentin exposure and other periodontal disease.3 DH prevalence ranges 10-30% among the general population4 and 3-73% among adult population in western Europe and the United States, with peak incidence occuring between 20 and 40 years of age.5,6 The heterogeneity of prevalence is related to target population, assessment methods and diagnostic techniques.7

DH management depends on proper diagnosis, identification of causative factors, and subsequently, elimination or control of causative factors.8 There are two DH treatment modalities; blockage of pulpal nerve activity, and dentinal tubule occlusion. The desensitisation of nerve can be achieved by using desensitising toothpastes (TPs) and mouthwashes containing potassium nitrate9 or potassium chloride or potassium citrate.10 Topically applied compounds can be introduced which form insoluble material to precipitate in the tubules and on the surface. The compounds that facilitate dentinal tubule occlusion by the formation of natural biological minerals are also effective and include bioactive glasses,11 hydroxyapatite (HA),12 calcium phosphate,13 fluorides,14 strontium or stannous salts15 and soluble oxalates.16 Enamel of human dentition consists primarily HA, thus synthetic HA holds a potential to be used for biomimetic oral care, focussing on biofilm management, caries, DH and erosion. Effectiveness of synthetic HA in relieving DH is well documented in numerous clinical trials.12,17,22 HA is used alone or as synergistic agent in oral care products utilised in preventive dentistry.23

Systematic reviews and meta-analysis have previously kept the prime focus on the desensitising effect of HA on hypersensitive teeth clinically.24,25

The current systematic review was planned to review both in vitro studies and clinical trials to find the mechanism of action of HA-enriched dentifrices/gels/varnishes in relieving DH via dentinal tubule occlusion. Special attention was given to HA particle size, shape, crystallinity and form, like agglomerated or dispersed

The articles excluded were narrative reviews, grey literature, books, those not in English, those whose full texts were not available, abstracts presented in conferences, studies older than 2009, and duplicate studies.

Also excluded were studies covering any other aspect of HA apart from those based on relieving DH via dentinal tubule occlusion, and having any mode of application of HA and F-HA other than dentifrice/gel/varnish.

Quality assessment of the included studies was carried out by two researchers independently following the Cochrane statistical collaboration review guidelines26 and outcomes for bias risk were calculated by bearing in mind the principal features stated: “Plain HA/F-HA, control group (HA-free group), comparison with other remineralising agent, clinical trial, dentifrice used, clinical assessment of dentin hypersensitivity”, and explained as having low, medium, and high risk for research trend for a 10-year period between 2009 and 2018. References in papers were checked and cross-matched with those from the original search. Where additional references were found that met the inclusion criteria, these were included in the review.

After identifying the eligible studies in the above databases, these studies were imported into Endnote X8 software to remove duplicates. Meta-analysis could have been considered instead of this systematic review if sufficient clinical studies existed. 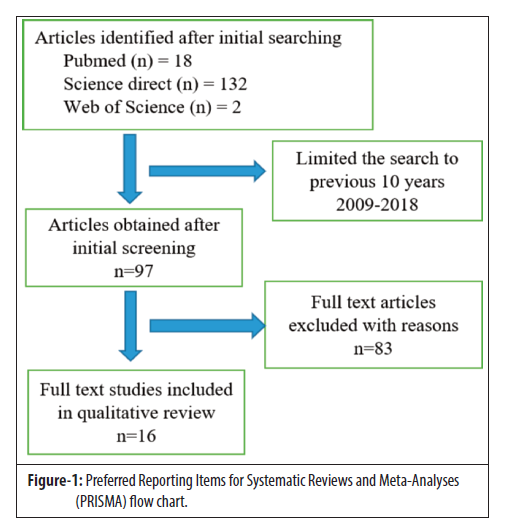 A surge in research trend was observed from year 2009 onwards (Figure 2), 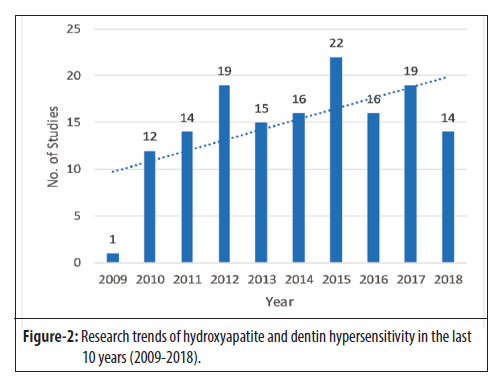 indicating the increasing popularity of HA among researchers regarding its potential to treat DH. 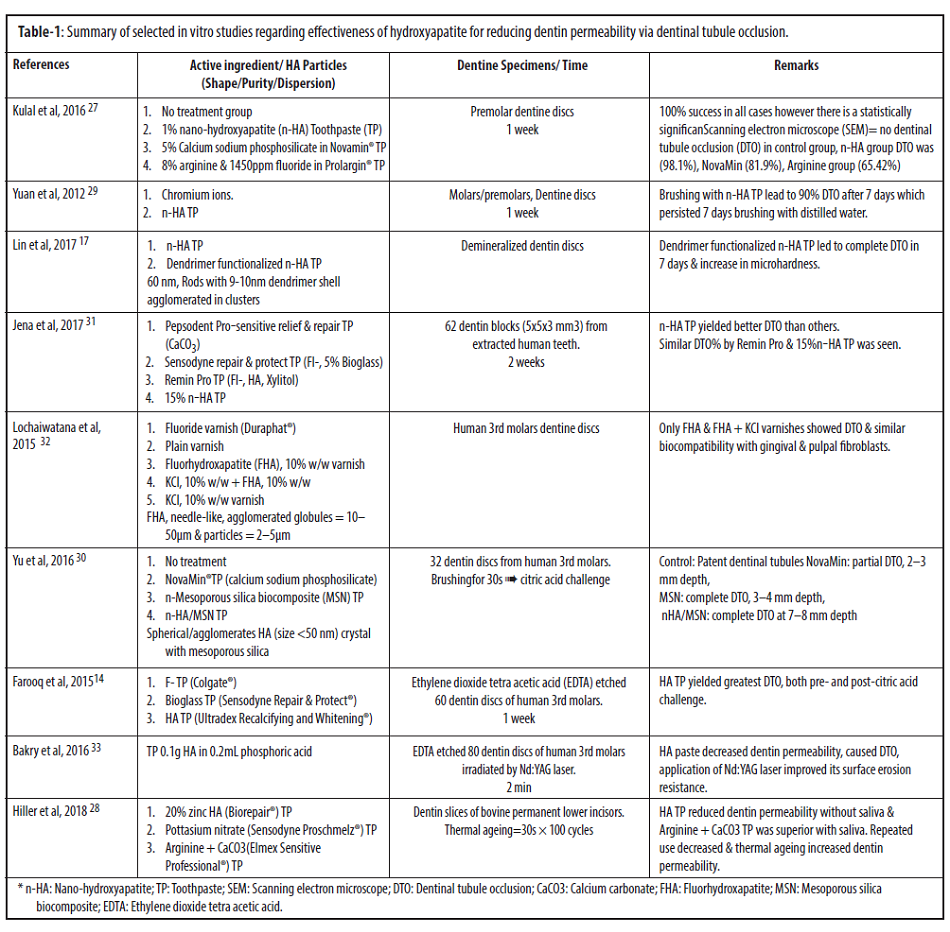 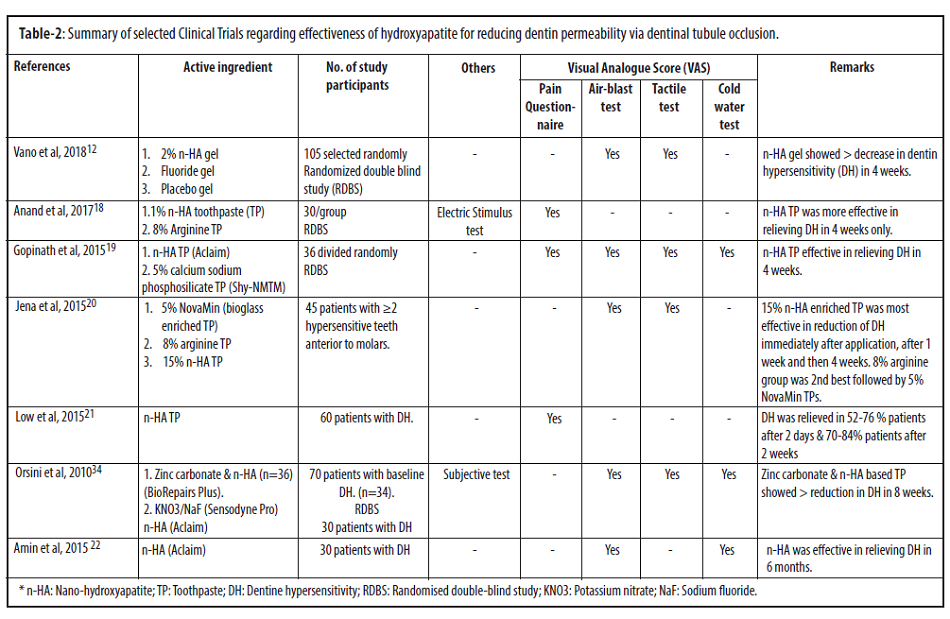 TP was the carrier medium of choice in all the selected studies except 2(12.5%), in which 1(50%) each used gel12 and varnish.32 In majority of studies i.e 5 out of 9(55.6%), HA in nanometric size range (n-HA) was utilized. Only 2(22.2%) selected in vitro studies utilised modified HA i.e. dendrimer functionalised n-HA in TP17 and F-HA in varnish32 and assessed their dentinal tubule occlusion potential. Other active ingredients with remineralisation potential used in comparison with HA were fluoride,14 prolargin,27 arginine,28 chromium ions,29 calcium sodium phosphosilicates,30 potassium nitrate,34 calcium carbonate,28 mesoporous silica biocomposite30 and bioglass.14,27 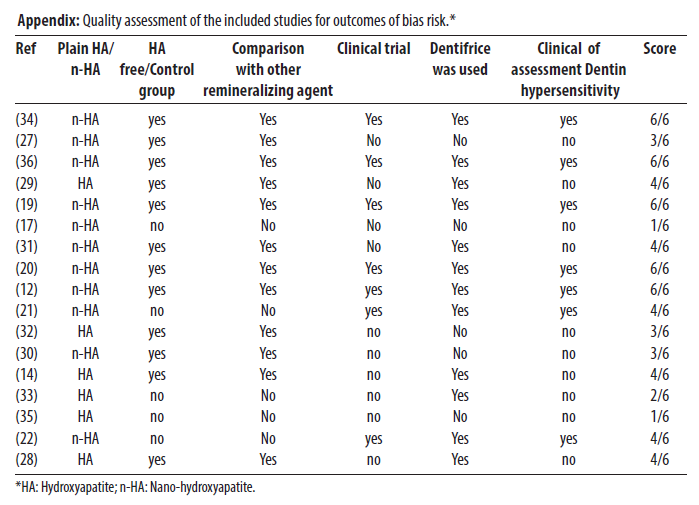 Majority of the studies included in the current systematic review were in vitro in nature and were performed using dentin discs of various dimensions prepared from caries-free extracted molars and premolars. After etching, the dentin discs were brushed for two minutes daily, using different types of commercial and novel TPs in an attempt to see their efficacy in dentinal tubule occlusion. Six out of the 9 in vitro studies provided no information about HA shape, purity, crystallinity, and agglomeration in the carrier medium i.e. TPs. In majority of these in vitro studies,17,27,28,30,31,35 efficacy of HA-enriched products for inducing dentin remineralisation were assessed only by observing resultant dentinal tubule occlusion in the treated dentin discs with electron microscopy.

Only two in vitro studies assessed dentin remineralisation potential of HA via dentin permeability measurement and observed a significant reduction in permeability of HA-treated dentin discs. Besides, the application of neodymium-doped yttrium aluminium garnet (Nd:YAG) laser to HA-treated dentin discs led to improved surface erosion resistance due to surface deposition of calcium orthophosphate (CaPO4) layer, whereas thermal ageing for 30s × 100 cycles led to increased dentin permeability in the presence of human saliva.28,33 Only one study28 reported that brushing demineralised dentin discs for a week with dendrimer functionalized n-HA dentifrice led to improved microhardness of the dentin discs due to complete dentinal tubule occlusion. In this TP, n-HA was in the form of 60nm rods with 9-10 nm dendrimer shell and were agglomerated in clusters.29

A study observed dentinal tubules occlusion after two-week treatment with all commercial desensitising dentifrices, namely Pepsodent Pro-sensitive relief and repair TP (CaCO3); Sensodyne repair and protect (Fl-, 5% Bioglass), Remin Pro TP (Fl-, HA, Xylitol) and 15% n-HA dentifrice, but the experimental 15% n-HA-enriched dentifrice showed maximum occlusion of dentinal tubules, which was believed to be due to the ability of n-HA to form enamel-like structure by self-assembling within the dentinal tubules.31 Similar findings were reported in a week-long study where desensitising agents, like 15% HA, 5% Novamin and 8% Proargin in dentifrices, decreased dentin permeability, and maximum dentinal tubule occlusion was achieved with TP enriched with 1% n-HA.27

Another week-long study reported that dentifrices enriched with bioglass and HA had shown better occlusion of dentinal tubules and maximum remineralisation potential along with resistance to acid exposure when compared to fluoride enriched TPs.14 A study prepared dentifrices enriched with mesoporous silica nanoparticle (MSN) and n-HA/MSN biocomposite (MSNBC).29 These crystalline particles and agglomerates of <50nm diameter had a spherical shape. Brushing the dentin discs for 30s followed by citric acid challenge revealed that the commercial calcium sodium phosphosilicate-based TP, NovaMin®, led to only partial dentinal tubule occlusion to the depth of only 2-3mm, whereas the experimental MSNBC and n-HA/MSNBC-enriched dentifrices led to complete dentinal tubule occlusion to the depth of 3-4mm and 7-8mm, respectively. Highest acid-resistant stability was exhibited by nHA/MSN-treated dentin discs.30

One study used two chromium ions containing dentifrices in which one was enriched with HA as well. Scanning electron microscopy and energy dispersive X-ray spectroscopy (EDX) showed that brushing for a week with HA-containing dentifrice caused better dentinal tubule occlusion (up to 90%) which also persisted after 7 days of brushing with distilled water. A marked increase in atomic percentages of calcium and phosphorus on the surface of dentin discs was also observed.29

One study developed FHA by precipitation method. These FHA crystals were needle-like, and were dispersed as aggregated globules of about 10-50 μm and particles of 2-5μm in two experimental varnishes (FHA, 10% w/w varnish; potassium chloride [KCl] 10% w/w + FHA 10% w/w varnish). Upon application, FHA-enriched varnishes led to dentinal tubule occlusion in contrast to plain varnish, fluoride varnish (Duraphat®), and KCl 10% w/w varnish.32 In majority of in vitro studies, HA was applied to dentin discs in paste form. However, varnish was used as FHA carrier in one study only. Irrespective of the carrier agent, HA showed reduction in dentin permeability via occlusion of dentinal tubules, pointing to the potential usage of HA in treating hypersensitive dentin.

Among the selected studies, only 6 were clinical trials that assessed and compared the efficacy of n-HA-enriched TPs/gels with the ones containing many other active remineralising reagents, like arginine,36 5% calcium sodium phosphosilicate,19 bioglass,20 blend of zinc carbonate and n-HA, potassium nitrate/fluoride,34 sodium monofluorophosphate, and oxidants21 in treating DH. Visual Analogue Scale (VAS) scores for pain questionnaire, air-blast test, tactile test, cold-water test, and digital electric pulp test were employed to assess reduction in DH clinically. A marked reduction in DH was noted for patients using n-HA dentifrice after 2-4 weeks and 3 and 6 months of application.19,22,34,36 One study observed that n-HA 2%  gel was as effective as fluoride gel, with improved VAS scores for both after 4 weeks, indicating a decrease in DH.12

Ten of the 16 selected studies used n-HA. In in vitro studies, effective dentinal occlusion was observed by scanning electron microscope (SEM) in 4 studies after brushing the dentin discs for a week with n-HA dentifrices, but the modified forms of n-HA, i.e. dendrimer functionalised HA and n-HA-enriched nano-mesoporous silica biocomposite dentifrices showed even better dentinal tubule occlusion than plain n-HA TPs. Plain HA TPs were used in only 3 studies and exhibited comparatively better dentinal tubule occlusion than dentifrices containing other teeth remineralisation agents, like fluoride, bioglass, potassium nitrate, arginine and nano-mesoporous silica biocomposite. Only one study reported greater increase in micro-hardness in addition to dentinal tubule occlusion of dentin discs treated with dendrimer functionalized n-HA dentifrice than the one enriched with plain n-HA for a week.

Number of study participants varied in the selected clinical trials. No information regarding shape, dispersion and crystallinity of HA present in dentifrices used in the included clinical trials was available except the fact that nanometric gauge HA was present in all dentifrices. In all the clinical trials, brushing hypersensitive teeth with n-HA-enriched dentifrices relieved DH after four weeks in four studies irrespective of n-HA content in the

dentifrices.12,18-20 A study reported relief from DH symptoms in only two weeks,21 whereas another study reported similar findings but after eight weeks.34 DH relief was reported by usage of Aclaim, a commercial n-HA-enriched dentifrice in patients after four weeks in a study and after six months in a clinical trial.19,22 However, the results of the former19 seem more reliable than those of the latter22 due to the greater number of study participants and usage of additional two DH measurement tests.

In the current systematic review, majority of the studies on HA application on dentine were in vitro and showed the effectiveness of nanometric gauge HA in causing dentinal tubule occlusion leading to decrease in dentin permeability. Clinical trials also supported these findings and reported reduction in DH in patients following 2-8 weeks of usage. Dentifrice was the carrier of choice in most of the included studies. Very little information was shared regarding the shape, crystallinity, dispersion, purity and substitution of HA particles.

33.    Bakry AS, Al-Hadeethi Y, Razvi MAN. The durability of a hydroxyapatite paste used in decreasing the permeability of hypersensitive. J Dent. 2016; 51:1-7.

Reorienting goals in endodontic therapy: Pulp revitalisation, on the brink of a paradigm shift